While we were in we’d pretty much mapped out this years cruising season. The plan was to leave mid January and mooch over to Bequia, turn left, dawdle down through all the postcard type islands and hit for the carnival in March.
Then we’d head back up the chain and cruise up and down the east coast till the end of the hurricane season in December.
Sounds like a good plan we thought, yep that will work we said BUT, and there is always a but when you are cruising, we forgot the old cruisers adage, “you write your plans in the sand and then the waves come and wash them all away”.

Receiving an email from our good friends Gordon and Ginny (Ascension) asking us to “pop on up to Antigua” for a visit, aka a 300ml sail in the opposite direction to where we were planning to go, saw us dismissing the idea at first. Then after chewing it over for about a week  it dawned on us that if we didn’t  “pop on up” we may not see them again ‘till who knows when, as they would be transiting the panama canal later this year and heading back to the greener pastures of Canada. The last time we’d seen them was in the small Greek anchorage of Trizonia in June 2009 and it sure would be terrible if we let this opportunity slip by. So there went our plans. It was time to bid goodbye.
With a careful look at the weather forecast we decided the best time to leave would be the afternoon of the 15th January. We would sail through the night and aim for the southern tip of St Lucia 90mls away, then sail up in the lee of the island and stop the following arvo at Anse de Grand on the island of Martinique and the night after in Friendship bay at Isle de Saints, the south end of Guadeloupe .

The whole trip once we rounded would be lovely day sails until we reached . Another good plan, or so we thought.

In years gone by all the articles we’d  read on sailing the Caribbean   spoke of  flat water, fast sailing, blue skies and steady breezes. Well we think that all the authors must have had way too much rum when they put pen to paper. Our introduction to sailing was far from the pictures painted in those glossy magazines. In fact at one stage we began to question our own sanity!
The night passage from was pretty good and as a bonus there was a full moon, but as we approached it was a whole different ball game. The sea state became very confused making for a lumpy, salty and uncomfortable ride. The heavens opened and the rain came pouring down, not just drizzle but heavy, can’t see the land anymore type rain. What had happened to our sunny ?

After rounding the southern point and once in the lee of the island the waters were much calmer, and at last the sun began to shine. The hills of looked extremely lush and were dotted with homes that reminded us of , many of the houses perched up on stilts. The high hills and deep valleys allow “bullets” of wind to come racing down and out over the flat sea. As we would soon learn, the standard sail configuration here in the is 2 reefs in the mainsail and a jib as the trade wind blows at 20 to 25 knots most of the time. 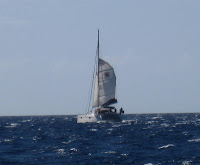 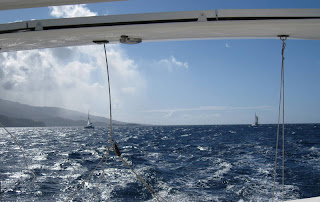 Sailing up the leeward side of the islands was exhilarating to say the least, but the passes between the islands, usually around 20 miles or so of open water were unbelievably rough.


After a few days of this type of sailing we really were beginning to think that heading north to was not a smart idea. Still we petsisted.
Knowing that we could take our time coming back down the chain at a later time we fast tracked to Antigua , stopping only once more before our arrival.

We made landfall in , and were greeted by the smiling faces of Gordon and Ginny (Ascension) and Sarah and GB (Djarrka). Bob and Becky (Stardust) were also there so it was just like old times again and we were glad that we’d made the effort to sail up. Over the days that followed we caught up with our old friends over many a meal, shared many a joke and generally had a wow of a time.

We strolled around the historical grounds of Nelson’s Dockyard with its immaculate lawns, gardens and restored buildings, hiked up the hill to where we enjoyed a Sunday evening BBQ and listened to a fabulous Steel Pan Band while we took in the sunset and views over English and and the distant .
﻿﻿﻿ 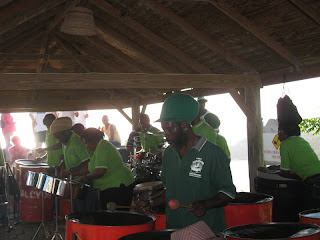 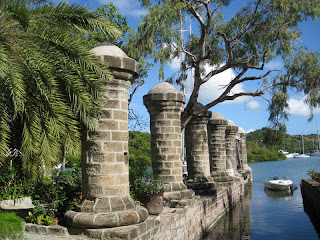 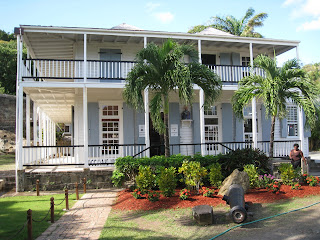 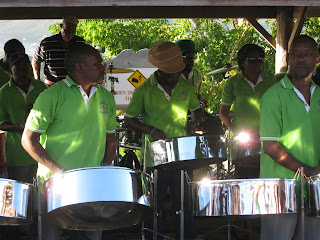 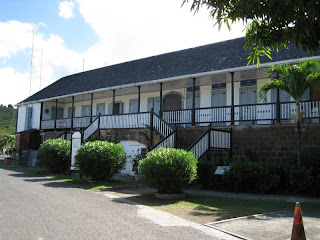 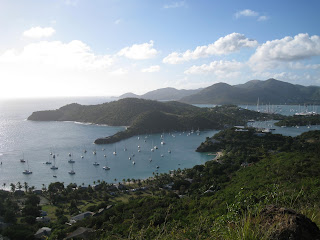 During our stay we also made a couple of trips into the main town of St John’s for shopping etc and we also took the bus over to the resort area of Jolly Harbour but saved the lion’s share of the islands sightseeing until our next visit later in the year.

Boat chores as always swallow up a lot of time and energy and Liam spent a lot of time up our mast fixing our jib furler that decided to come apart when we tried to pull our sail down for some minor repairs. A quick little job turned into a major headache that took 4 days to fix, and he managed to jam one of his fingers in the foil  during the process  and ouch was definitely not the first word that sprung into his mind when that happened!.

is home to the Antigua Yacht Club and attracts some of the largest yachts on the planet. The marina is quite small but the combined wealth of the yachts tied up there was just mind blowing The fact that you could just stroll the docks and get up close and personal with the likes of The Maltese Falcon and Mirabella V, THE biggest sloop in the world with a rig that stands 84 m tall, then of course there were the smaller ones coming in at 120ft – 180 + ft like Twizzle, Salperton, Tiara, and Lady B just to name a few. 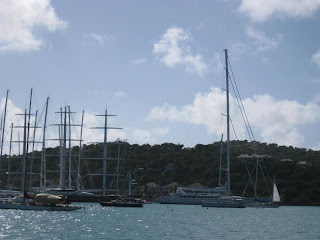 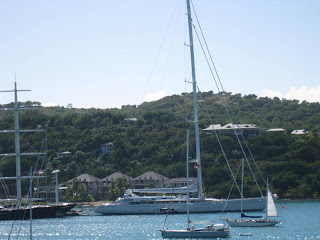 The size of the masts were incredible..Maltese Falcon  left & Mirabella V on the right 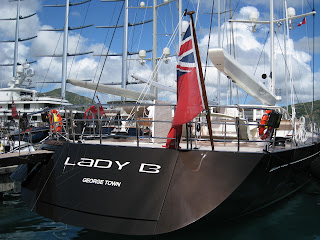 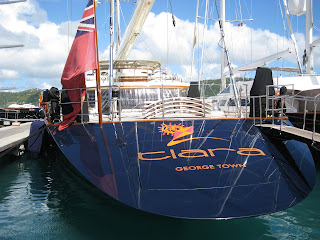 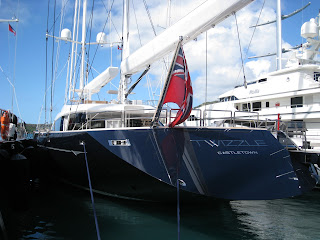 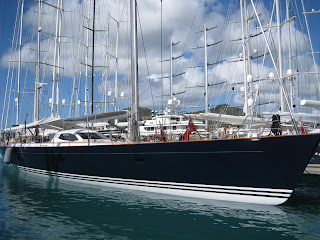 There were also a goodly number of big power boats as well including Eric Clapton’s Vabana. Sadly whilst we were in the anchorage we watched the beautiful “Salperton” limp back to port as a motor boat after she was dismasted in a gentle 12knot breeze when her carbon fibre rig failed. 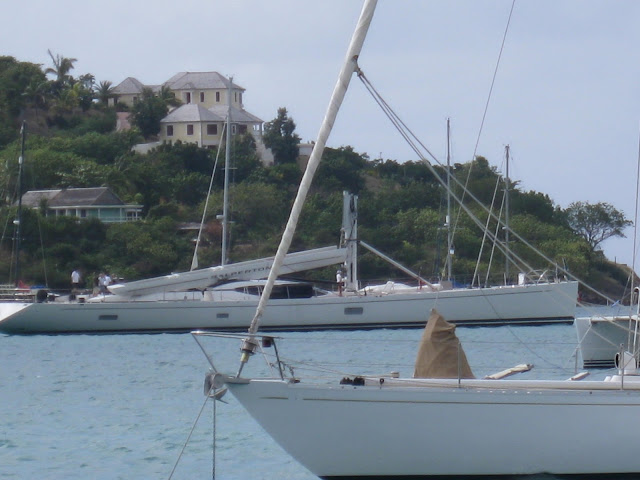 Apparently it will take 6 months to build her a new rig in so for the owner and crew this seasons racing and cruising plans are now sitting on the sea floor just off the coast of .
Clearly is a hangout of the rich and famous and as Liam likes to put it “we fitted in well”!

Australia Day saw the majority of the Aussies from the cruising boats at anchor as well as some of the younger ones working on the super yachts gather at the popular watering hole “The Mad Mongoose” bar for drinks and a little socializing. The Mongoose was also running an appeal for the relief fund for the Queensland flood victims, so we were all very happy to be patrons at the bar that evening. 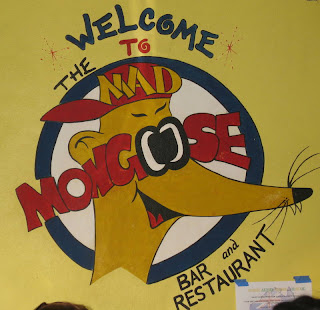 A few days later it was time to think about heading south again. The farewells were sad, as they always are but we know that our paths will cross again somewhere in the future. 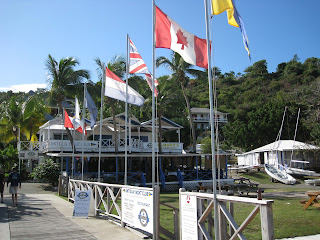 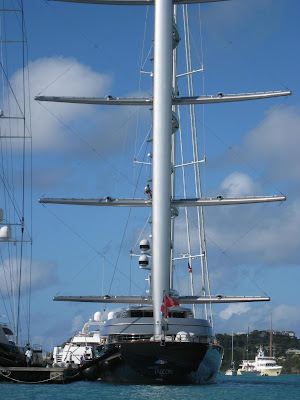 On the 29th January we pulled up the anchor, pushed out into the open water and pointed our bows towards and places beyond.

WATERMAKER FILTERS: “The Watershed” with its red door and dinghy dock at Falmouth Hbr sells the paper filters for $7 us each, cheapest around by far.

VHF: CH 68, English and Falmouth Hbrs for any type of service from taxis to riggers to laundry.