After leaving the lovely anchorage of Petit St Vincent we headed south towards . Our first stop was, yes you guessed it, to complete the paperwork necessary to enter yet another country. 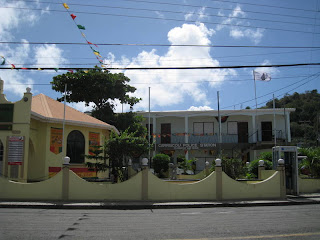 Except for a few of the dependencies nearly all the islands of the are stand alone countries. It becomes a tad tedious after a while, checking in and out of each one when you only intend to stay  a couple of days at each, and the dollars do start to add up for the entry fees as well.

and the Grenadines are made up of three main islands, , Carriacou and Petite Martinique, as well as a few smaller ones scattered around the chain. We made a brief stop at .in the town of Hillsborough on Carriacou to take care of the formalities and pick up  a few tasty morsels from Patty’s Deli, just along from immigration, and  then it was time to head out for the 20 mile sail to Prickly Bay on Grenada.
On the way down we passed tiny which apparently has quite good snorkeling. Weather permitting we may stop here once we start heading north again.

Sandy Island, pretty as a picture

We arrived at just on dusk and were greeted by the familiar voice of Bridget from White Rose on the radio welcoming us to . No sooner than we’d finished anchoring than they appeared in their dinghy at the back of GWTW. With smiling faces and hugs and kisses all round we opened a bottle of bubbly to celebrate finally catching our friends. Incidentally, we’d told them when we left to head up to that we’d be back down to them in about a week. Well that week blew out a little and 35 days later here we were together again.
The following morning Peter and Bridget kindly gave us the cook’s tour of , the capital, which being a Saturday was not as lively as other days and, of course, showed us the whereabouts of the supermarkets and chandleries.
We met up with fellow cruisers Phillip and Sandra from the Swiss yacht Ulani, and also caught up over a “pot luck” dinner on the beach with Lynn and Glenn from Steel Sapphire, who we knew from our Atlantic crossing. They were here still waiting for parts for their autopilot which failed during their crossing. 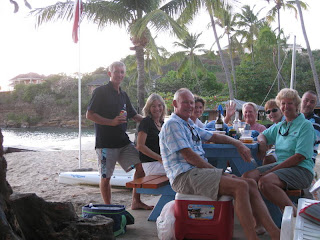 The weather during our stay in has been a mixed bag of rain, rain and the occasional spot of sunshine, so land tours were definitely off the agenda. Just venturing out to De Big Fish restaurant only 300 yards away from GWTW was an exercise in precision timing between rain squalls. However, all this rain is not such a bad thing, as necessity, or is that boredom is the mother of invention. With hundreds of gallons of  free water falling from the heavens our water tanks were constantly full thanks to  Liam’s expertise in the GWTW’s tool shed come  plumbing factory up in the bow. In fact he spurred both White Rose and Bondi Tram when they arrived a few days ago, to organize rain catches for their boats. Everyone agrees that the pitter patter on the decks and the tinkle of water in the filling pipes is much better than listening to the throb of the watermaker which can take hours to fill the tanks. 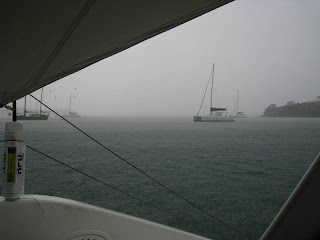 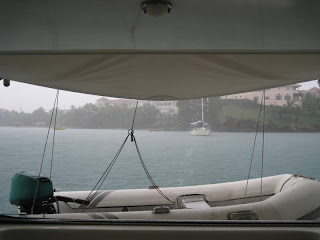 Friday night rolled around  and the bar across from Prickly Bay Marina was having a couple of local bands playing so, together with Bondi Tram, we headed over to check out the music. As we arrived the steel drums we being offloaded from the truck and within 15 mins the band were in full swing. The music that these drums make really does sound like all the instruments that you would hear in an orchestra, it just has to be heard to be believed. The setting at the marina was lovely and sitting in the garden under the trees made it a great venue. After staying a while we then strolled down the road to the local Chinese restaurant for an excellent dinner.
There have been plenty of other chances to listen to live music as De Big Fish has entertainment at least three times a week. 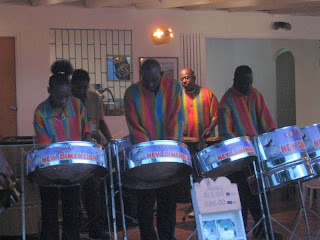 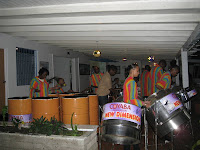 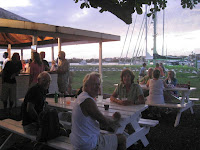 Previously White Rose had suggested that we should attend a local service and as the was just a few minutes walk from our anchorage, we decided that on Sunday the 27th we would dress up in our Sunday best and head on down to church for the 10am service.

Our day at church turned out to be very appropriate as on that morning’s radio net we heard the very sad news that our Kiwi friend Maurice, from Baracca, had passed away suddenly during the previous night. At the end of the net Liam played the Rod Stewart song Sailing over the radio in memory of Maurice. Our thoughts along with all our cruising friends are with Heather his wife, and his family back in .

Arriving at the church we were welcomed by one of the church officials who invited us to have a seat or to join one of the women’s or men’s discussion groups. We opted just to take a seat and wait for the service. The interior of the small church was nothing like what we were used to back home. There was a band area at the front and also a big screen up on the wall. The parishioners were dressed in their finest, some of the the women wearing hats and all the men in long trousers, even the children were done up to the nines. 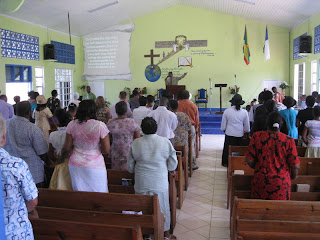 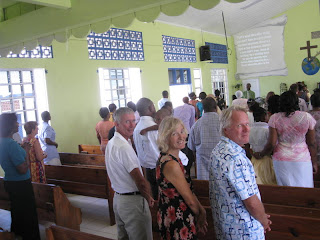 The little church was full of life 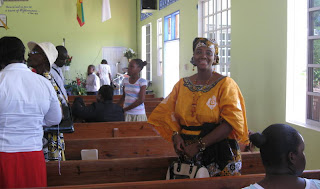 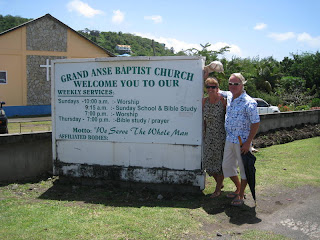 This lady looked beautiful in her outfit


The service began to the sounds of electric guitars, drums and tambourines. The crowd swayed to the beat of the music, some more enthusiastically than others. The Reverend led the  way with the  same very upbeat hymn singing, said a few prayers and asked for any visitors to stand and say hello, so we  did.  Later, at the equivalent of the catholic “peace be with you”  hand shaking , the whole congregation was up and  greeting not just those sitting near, but moving around the church hugging and hand shaking everyone. It was something that was quite overwhelming for us as these ever so happy people took us in their arms to welcome us into their church. This went on for about 15 mins. About half way through the service the Reverend began the sermon, the subject being “Time to Repent”. He was extremely vocal and loud at getting his message across and if he didn’t have high blood pressure at the start we all reckon that he had it by the end of his lecture, I mean sermon!

The service lasted around two hours, with a Baptism to follow, however we decided not to stay for that. On our walk back to the marina the gentleman sitting in front of us with his family stopped and asked if we would like a lift to the Baptism which was to be held at the beach, we declined his offer and with that he asked if we would like a lift back to the marina. We said that we were happy to walk .
The Grenadian people are certainly friendly and we think the best so far. 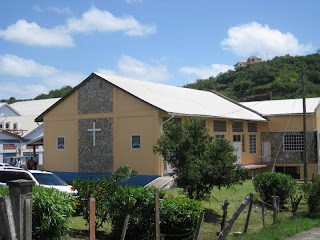 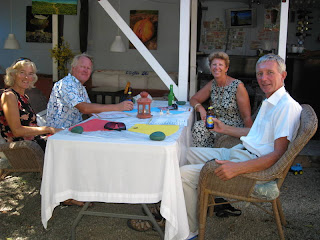 Later that evening White Rose, GWTW and Bondi Tram gathered together on the beach for a pot luck dinner / wake in honour of Maurice, we figured he would have liked that. As we toasted to his adventurous life the sky turned a beautiful shade of pink. 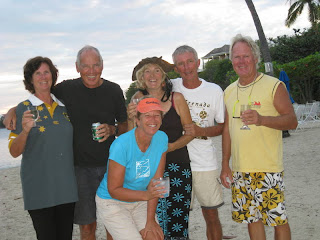 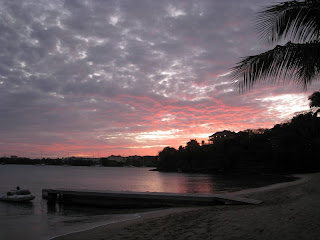 Toasting to a fellow cruiser and to life itself

Today, Monday the 28th we are about to leave for our overnight passage to . White Rose has been waiting on a new propeller to arrive from the for about a week and finally it is here. Earlier this afternoon GWTW towed the “Roses” three miles north to a shallow beach just off the main town of where Liam and Peter have donned their scuba gear and are fitting the prop as I type. 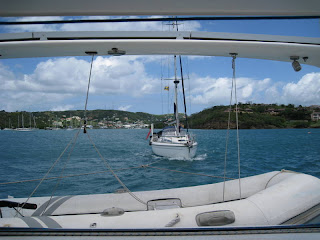 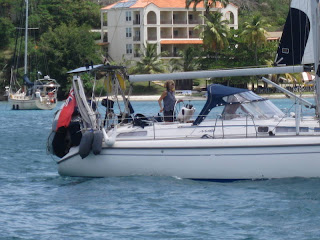 Email ThisBlogThis!Share to TwitterShare to FacebookShare to Pinterest
Labels: Caribbean 2011-The Windward Islands, Grenada, The Grenadines