The Jewel of the

Everyone keeps telling us that the weather this year is “unseasonal”. This is the dry season and so far nearly every day it has rained. The day that we left Bequia for the 30 mile sail south to Tobago Cays was no exception. Rain squalls came blasting through fairly regularly and, along with the strong wind, we had our doubts about going out to the cays.
Still, we decided to go take a look anyway and we are glad that we did.
The cays are made up of five small islands surrounded by an extensive mass of coral named Horseshoe Reef.  There are many other reefs close by including Egg Reef and World’s End Reef.  The last time that we had navigated in reefs was coming up the back in 2008, so we had to have our wits about us. As we approached the reefs the depths started to drop quickly from 83ft to 30 and continued to drop to around 10 ft. It didn’t take long before the water colour changed from deep blue to beautiful hues of aqua and the sandy bottom below became clearly visible.
After following a compass course to miss a couple of isolated reef patches on the way in as per our pilot book, we motored through the pass between two of the islands where a lot of boats were sheltering from the wind, and continued further on ‘till we found a nice spot just to the south of Baradal Island. This part of the cays is a little more open but a lot closer to the reef where the best snorkeling is to be found.
We anchored in 11 feet of beautiful aqua water over sand and the anchor took first time, it’s always so nice to anchor in sand. The cays are absolutely beautiful, not a building within cooee and they are only accessible by boat, no resorts, no jet skis, just peace and quiet. 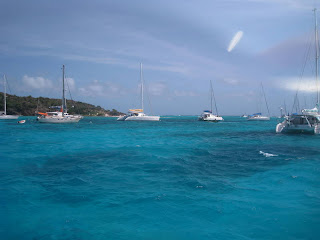 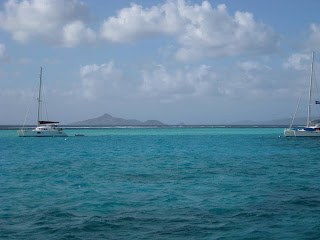 Our Kiwi friends Maurice and Heather from Baracca were also in the anchorage along with Aussies Steve and Gail (Gone Troppo), and Ross and Susie from Impulsive (B 1) whom we last saw in an anchorage in back in 2008. “Impulsive” is an Australian designed Buizen and as she was traveling at that time in company with another Buizen so we nick named them B 1 and B 2. We always find it novel when people turn up in the same anchorage as us after so many years and so many miles. 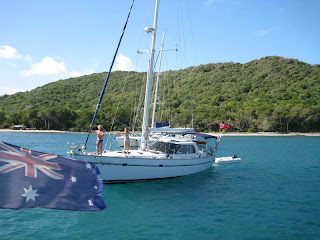 Impulsive with Ross and Susie

There certainly was plenty of wild life around the cays, and while snorkeling not far from GWTW we saw some really big turtles and stingrays as well as lots of fish. Being a marine park and wanting to protect the coral there are many mooring balls for the yachts to pick up, as well as smaller ones to tie your dinghy to whilst snorkeling or diving on the reef. 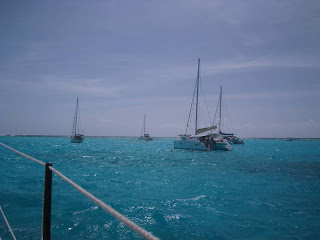 A small fee is charged per day to stay in the park but strangely, the ranger only seemed to target the charter boats and neglected us. We figured they make a lot more revenue from the charterers than from cruising boats that normally only have two persons aboard.
As` it was such a lovely place we stayed for an extra day swimming, snorkeling and relaxing. The second day was clear and sunny and the sunset that evening was gorgeous, turning everything including the water a soft shade of dusky pink. 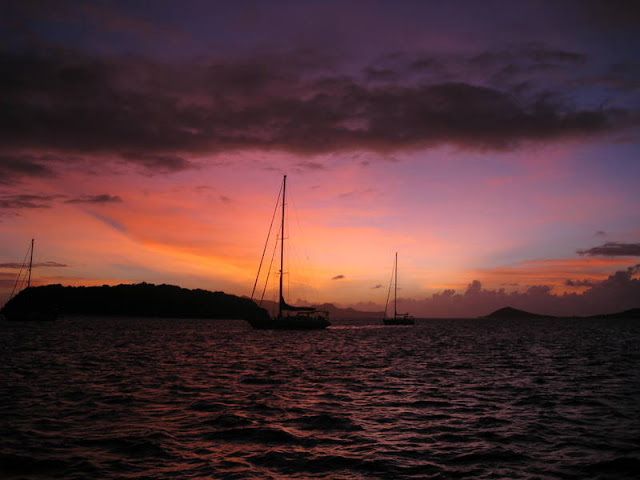 Park Fees: A fee of $10EC per person per day is payable either to the ranger in the park or the at customs office in Bequia.

Supplies:   Boat boys can supply bread, fish and souvenir tee-shirts.
Posted by Gone With The Wind .... on safari on Saturday, February 26, 2011