If you listen to all the negative reports about specific countries that float around the cruising circles then pounds to peanuts you will miss out on seeing some fabulous places. This is what nearly happened to us in regard to the . After reading reports of theft and break-ins on the various cruising websites, the thought of stopping here was the furthest thing on our minds. Admittedly these things have happened in the past and may well again in the future, but the people of Dominica, in particular those of Portsmouth, have taken the bull by the horns and are actively trying to attract the passing trade of the yachting fraternity, and clearly it’s working. The boat boys have implemented security patrols on the water at night and so far there do not appear to have been any further incidents
Our friends from Tehani-Li and Mindemoya had been singing the praises of this small island and encouraged us to stop there on our way south, and we are so glad that we did.
We knew that fellow cruisers on  Samsara and No Rehearsal were heading north to the anchorage that we had just left, and  we figured that they would only be  a couple of miles out from  island. Like us, they were not planning on making a stop here either but after a chat on the radio and sharing what we’d been told about the island, they too changed their course and headed into the bay.
When we rounded the bluff to the north of Prince Rupert Bay we were very surprised to find at least 40 yachts anchored in the bay. Motoring in we  were greeted by the friendly faces of the local boat boys asking if we would like to pick up one of the moorings, we declined their offer as we prefer to use our own anchor. The bay is very large and the northern end, away from the town of , is an idyllic anchorage, very calm and protected from the northerly swell. The bay has a very tropical feel with a lovely sand beach and swaying palms. 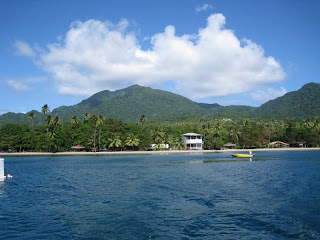 Further to the south of the bay the shore is littered with rusting hulks that were driven ashore when hurricane David hit the island in1979. 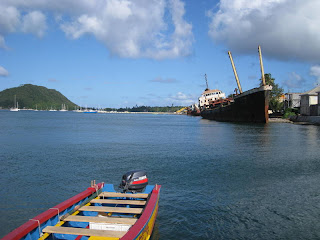 The anchorage (above) &  the remains of the ships
after hurricane David devastated the island. 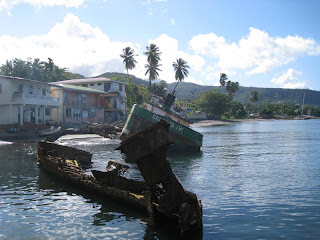 The name boat boys is the term used throughout the Caribbean  to describe the local folk who offer  an array of services, anything  from selling fruit, bread or fish to organizing tours or taxis. Theses people on the most part are not young as the name implies, but are family men trying to make a living so it’s nice to help them out and buy a little something from time to time. 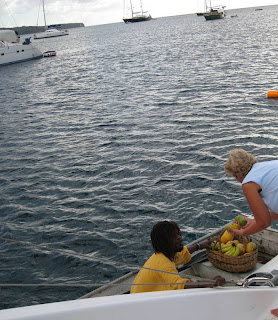 After settling in we had a quiet afternoon catching up with friends that we’d not seen since .
The following morning we decided to try and organize an island tour. Unfortunately, our timing was terrible as a cruise ship had come into port early that morning, and the price of the tours had sky rocketed, obviously the increase was directly related to the depth of the pockets of those aboard.
So along with Samsara and No Rehearsal we opted for the cheaper way of touring and caught a local bus to the island’s small capital, , with the intention of having a look around and maybe catching another bus up to one of the island’s many waterfalls.

The drive down to took about 40 mins and although we traveled on the coast road it was easy to see that was a very lush, wild and mountainous island. 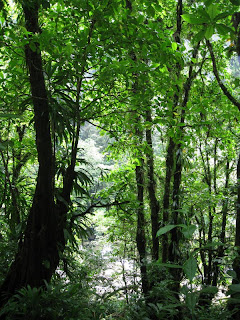 In fact it has the highest peaks and the most rainfall of any island in the eastern . Apart from the odd cruise ship which only stays a few hours, and the yachts, there really is no tourist industry; the throngs of holiday makers pass by this little piece of heaven. There are no big hotels or resorts anywhere and when visitors do come it is to enjoy hiking in the rainforests and the peace and quiet nature itself.
Whilst walking around the town and ambling along the waterfront area we were approached by a fellow offering to drive us around the island. The price was much less than we’d been quoted earlier that morning so we agreed and hopped into his van. The terrain of the island is incredibly steep and at times we thought that the van may not make it up the hills. As we climbed higher the rain came tumbling down, luckily it stopped just as we arrived at our first stop, . After a short hike through lush forest we arrived at the viewing platform, the falls cascading down in front of us from a height of 200ft. 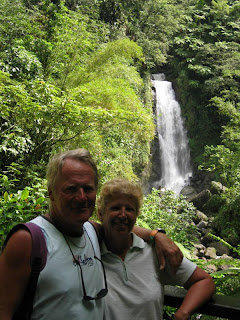 Due to the muddy terrain we resisted the temptation to climb down to the rock pools below the falls and instead returned to the van making a quick detour for a beverage stop at a cute restaurant overlooking the lower falls.
Our tour took us on the winding roads through the central part of the island and along the edge of the Morne Trois Pitons National Park where most of the island’s main wilderness sites are to be found. A visit to this area takes many hours and requires a guide, and as we were short on time, we gave it a miss and headed over to the eastern side of the island.

The scenery was stunning with rainforest and thick jungle all around. Our driver was very knowledgeable, stopping to give us samples of lemongrass and other herbs growing along the roadside We passed a few villages tucked away in the hills but they were few and far between, this was one place you wouldn’t want to break down! 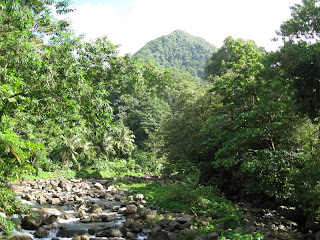 Once back on the coast we made our way north stopping briefly to chat with an elderly woman selling fruit and to have a very late lunch at the Bamboo Restaurant in the seaside town of . 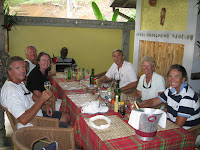 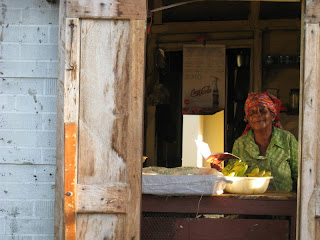 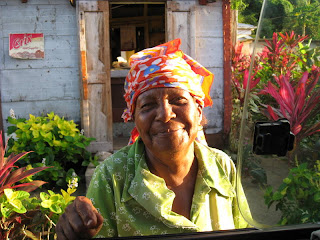 This lady loved to talk! 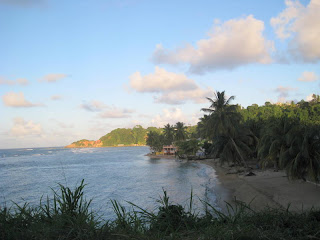 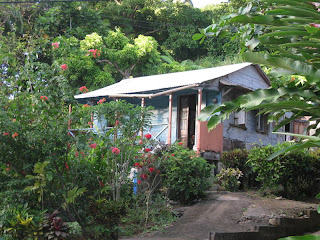 The east coast was more tropical looking  and there were some gems of houses. 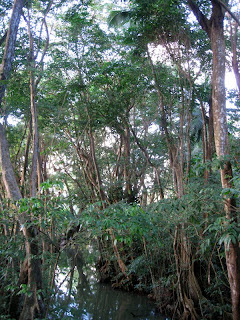 Although the island is only 29 miles long the terrain makes driving rather slow, so it’s hard to see it all in a single day.
Arriving back at the boats just as the sun set we decided that we may well have to stop at this lovely island another time. 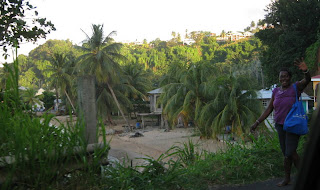 Local : Cobra tours will take you up the and has been recommended by   some cruisers as a worthwhile outing.

Boat Boys BBQ: Held every Sunday $ 15US pp and the proceeds go to fund the security patrols, a worthy cause for sure!

Formalities: Customs are located in the large silver roofed building at the far end of bay. Take your tender over or ask one of the boat boys to take you as it is a long way.
Posted by Gone With The Wind .... on safari on Sunday, February 20, 2011