Sailing south from across the passage to was yet another hard slog. The wind was on the beam and the large swells banging into the hulls made for an uncomfortable and very wet ride. Whenever one of these big swells slammed into the side of the boat the wave would roll up and over our cockpit roof cascading off the back like a huge waterfall, turning our cockpit floor into a giant saltwater swimming pool.Our boat speeds were very good and  for a while we sat on  speeds  between14 to 18 knots so although the conditions were not great  we were certainly  chewed up the miles fast. 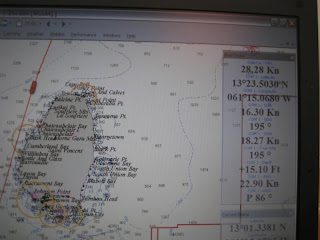 By the time we got into the lee of St Vincent Liam looked like a salt encrusted drowned rat.

The , from what we could see of it through the rain squalls, looked very mountainous and lush. 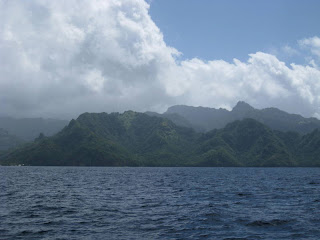 We had already decided not to stop here but to push on to Bequia and complete our entrance formalities there. It was a bit of a race against the clock as we didn’t want to get stung with overtime charges that kick in at 4 o’clock.
Arriving just after 3pm we anchored and then had to re - anchor as the first time did not hold. We had already been warned of the poor holding in , so we were very pleased with our second attempt when the anchor dug in well.
A quick dinghy ride into town saw all our paper work completed in about 15 mins thus allowing us the freedom to cruise the area known as (SVG’s).
As we came into the bay the boat boys had been out offering any new arrivals the usual services and when we returned from town one of them came over to GWTW selling fresh lobsters.  We’d already heard the cruising legend of the availability and low cost of these sumptuous crustaceans so how could we refuse such an offer? After negotiating a good deal with Simeon the boat boy, he dispatched the creature to King Neptune and then explained the best way to cook it. Liam was so impressed with his service that we ended up buying two. 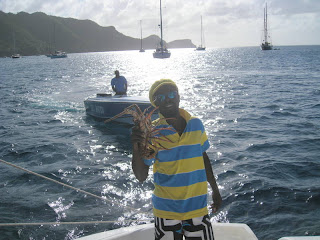 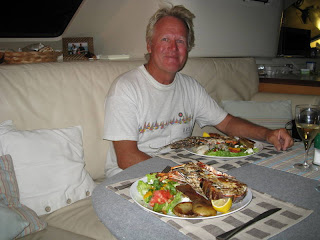 Later that night the BBQ was fired up and the master chef did a fantastic job of cooking them.
As darkness fell the wind picked up and it continued to howl all night. GWTW pulled back hard on her anchor many times that night and at 0430 a huge tug jolted Annie awake. A quick scramble out to the cockpit revealed the worst, the anchor had let go and we were starting to slide backwards. Luckily the mooring ball a few meters behind us was still not occupied and earlier during dinner we’d joked that if the anchor was to let go we could always pick the ball up as we slid by. The moral there is one should NEVER joke about such things. The other good thing was that during our anchor swim the previous afternoon we’d checked out the ground tackle of the aforementioned ball and deemed that it would be strong enough to hold us.
With the strong gusts pushing us we quickly lowed the dinghy and Liam set out, ropes in hand, to find the ball which was no longer behind us. After a fair bit of to-ing and fro-ing with the engines we attached ourselves with a makeshift bridle to the ball which was now about a boat length in front of us. After a nice cup of tea we retired back to bed knowing that we were now safe from the nasty wind that was still howling outside. Quite a few boats around us also dragged and we considered ourselves very lucky to not have had to re - anchor in the dark on such a windy night.
The weather was quite unkind during our stay in Bequia, with strong winds and heavy rain squalls making our time here not at all condusive for island sightseeing. We did however catch up with friends Val and Gerry (West by North ) and Sue and John (Salt Scar 3).
Being boat bound for a few days we must have looked a bit like a captive audience, as our lobster seller returned and we bought a couple more which we froze to have as a special treat another day
The town of is rather small, more like a village really. walkway follows the shoreline around a large part of the bay and this is where most of the bars and restaurants are located. Max’s pizza bar is a popular venue with one of their culinary delights being lobster pizza. We couldn’t resist giving it a try, after all we’d never seen that on a menu before. The size of the pizza was huge with plenty to take home and it was very tasty.  The Gingerbread house and the Whalebone bar, yes the furniture is made from whalebone, are just a couple of other bars along this shady pathway that eventually leads back to town. 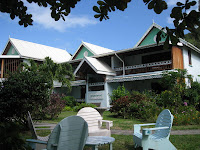 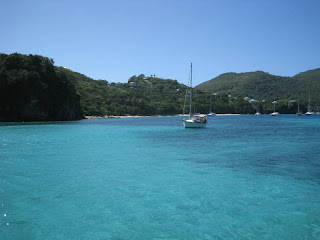 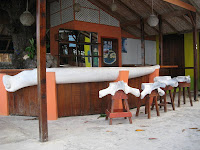 A short dinghy ride over to the western shore of the bay brings you to the trendy “Jack’s Bar” fronting the long stretch of sand on Princess Margaret Beach. We spent a relaxing couple of hours here enjoying the surrounds and listening to some laid back music while catching up with friends, Sue and John. 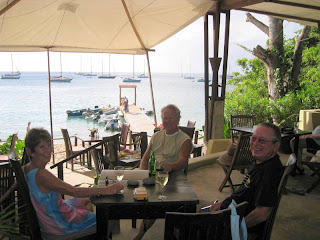 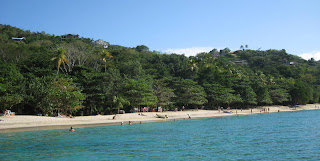 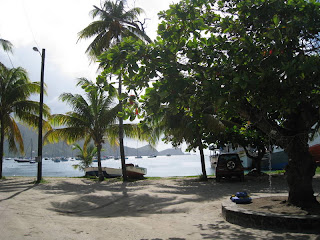 As with all of our short stays on the islands, next time we visit we’ll explore it much more thoroughly. 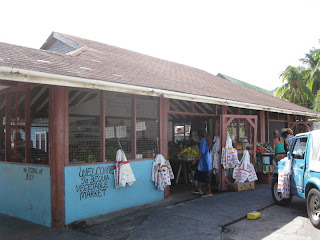 The fruit market (R)
and an interesting sign on the wall below. 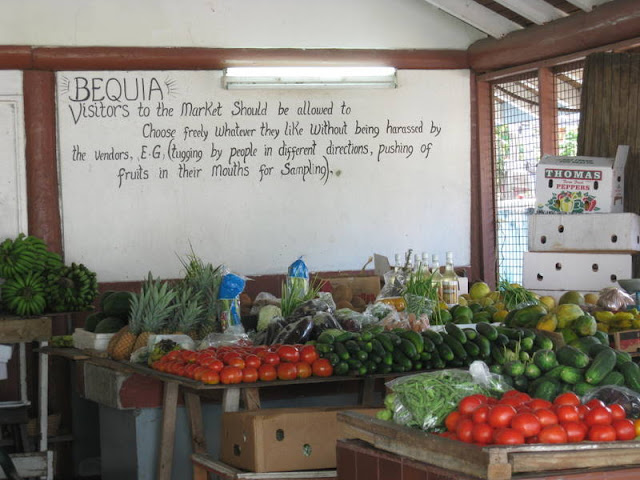 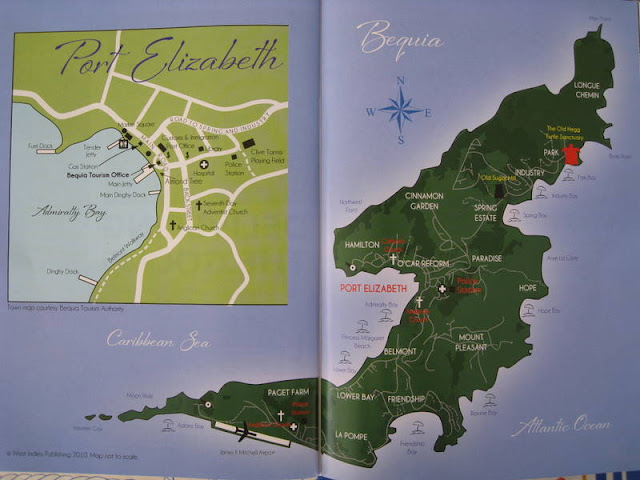