Our mileage log read 55miles when we anchored at on the side of .  It had been a long sail from and we were very glad to have arrived before nightfall as the bay is littered with over a dozen submerged wrecks some of which lay only a few metres below the surface. 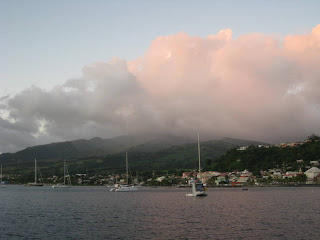 These wrecks  are the result of the 1902 eruption of Mont Pelee which stands 7 kilometers inland. The violent eruption destroyed the town in only 10minuites leaving only a couple of survivors one of whom was in a jail cell.

We will return here later in the year to explore the area and visit the Musee Volcanologique which is said to be excellent.
Reading the trusty Lonely Planet it says that the sunsets off Sainte Pierre are postcard perfect and on que our sunset was exactly that, perfect.
After a good nights sleep  we awoke on Sunday morning to the sound of church bells and the beautiful voices of a choir  emanating  from the town’s cathedral what a lovely peaceful way to start the day..

The day looked overcast with a few squalls around but we decided to head down the coast to the anchorage of Sainte Anne anyway. When we were about halfway across the huge of de we were hit by a monster squall packing winds of 36 knots in complete whiteout conditions.  We had quite a job furling our jib, everything on the rig was shaking violently and we had visions of something letting go, thankfully nothing did. The poor jib looked like a dog’s breakfast by the time we got it away but at least it was still in one piece. The squalls came and went in almost endless succession over the next couple of hours so by 3pm we were relieved to be anchored in the shallow waters of St Anne.
We spent the next couple of days here while the wind blew and the rain poured on and of each day. The town of is small and nothing to write home about but the bay is very large with a beautiful with sand beach housing the premises of Club Med at one end. 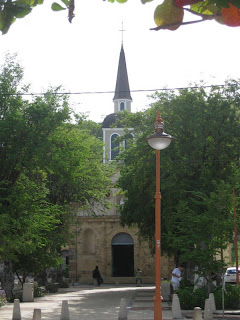 Check in at customs, Douane as it is called in French was once again very easy.
The following day we took GWTW further round the bay to Cul - De - Sac Du Marin for a spot of supermarket shopping so that we could stock up on a few legs of New Zealand Lamb as well as all those wonderful French delicacies that unfortunately do not reflect well when we jump on the scales these days!! It was way easier to take the boat around rather than find a taxi.
Adding Sainte Anne to our growing list of anchorages, we will stop here again when we return from .

The following morning it was time to move on. We made a fleeting visit to where we picked up a mooring ball at the end bay near Malgretoute under the towering peaks of the Pitons. As the anchorage here is very deep and swinging room limited even when you pick up a ball you still need to stern tie to a coconut palm. Memories of Turkey came flooding back where that was the normal way of life when anchoring in a lot of the bays, mind you in Turkey we tied to pine trees or big rocks not palm trees. 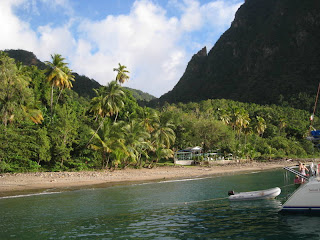 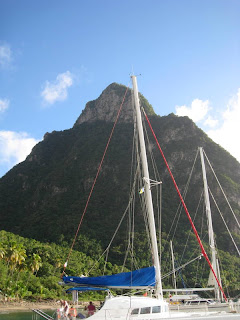 Tied to a palm tree with The Pitons behind 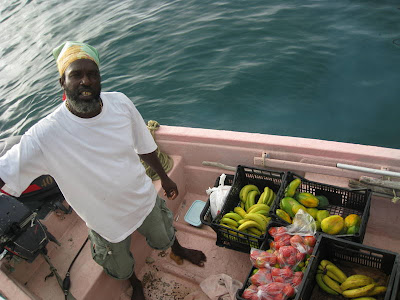 Fruit seller at The Pitons
The boat boys  who helped us tie up were very helpful and organized, we paid them $ EC 25 for their help, and the Park ranger who arrived just on dusk , memories of Croatia this time ,was also very polite. He wanted $EC 56 for two nights but as we only wanted to stay one night and were leaving at 0730 we negotiated a deal of $EC 20 plus 2 cans of beer and he went away a happy chappie.

Formalities:  Australians need to purchase a visa on arrival & the cost is  $50 US pp. This is on top of the regular check in fee.