SOUTH BOUND IN THE

What a relief it was to be heading south and have the wind with us, such a contrast to our trip up from . Crossing the strait between Antigua and was a dream run which saw us sitting on a very comfortable boat speed of 10kts most of the way. The seas were calm and a lovely 15 knot nor’easter was pushing us along. It was a rare trip indeed as we were actually sailing with a full mainsail (no reefs) and our screecher, which is a large reaching sail.
Rounding Pointe du Gros Morne the pretty and well protected anchorage of Anse Deshaies came into view. There were around twenty yachts already anchored in the bay, this being a very popular stopping point when traveling either north or south. 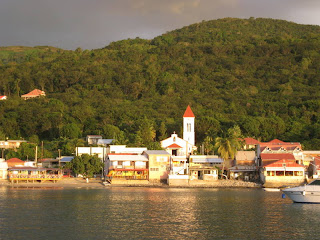 After dropping the hook we headed into the small village to check in with customs and have a look around.   The village was on the small side but quite adequate for a stay of a couple of days. The clearance formalities took about 10 mins max. You’ve got to love the French, no stuffing around,  it’s all done by computer and is a walk in the park so to speak. Apparently the customs officers are only in attendance in Deshaies for one hour per day, so in their wisdom they decided to hand over the reins to the proprietor of a local souvenir boutique named “Le Pelican”. 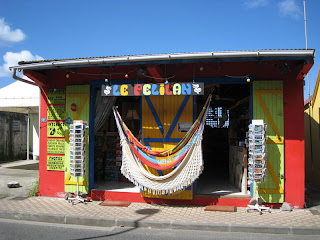 This gent  who has installed a couple of computers  prints the completed entry form for you, stamps the document, charges 3 euro for his service and then wishes you a pleasant stay in Guadeloupe. This is an inward and outward clearance and negates having to visit the officials again when you leave the main island or the satellite group of Isle de Saints further to the south.

After a walk up the main street and checking out a few menus we settled on a small restaurant with a terrace over the sand and had a lovely dinner ashore. Having arrived late in the afternoon (1600) we unfortunately missed the boat boy who takes orders and delivers fresh baguettes and croissants to your boat around 7am the following morning, what a service! 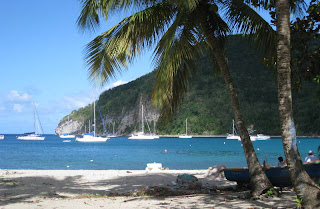 As we had only planned on staying in Deshaies one night (another place that we’ll pick up at a later date), we made a quick dash into the village to the Casino supermarket and then we were off  for a whopping 3 mile  sail south to “” for a swim and snorkel. This area is a marine park and has only a couple of yellow buoys for yachts, so we anchored inside Pointe Malendure (23ft sand) and took the dinghy back over to the islands. It was nice to get in the water, but the snorkeling was rather disappointing compared to the fish life & coral that we had seen else where in the world including .
We did hear later from some of the other cruisers that the better snorkeling was on the Pointe Malendure itself, oh well.
Continuing further down the coast we stopped for the night in “Anse a la Barque”, a small bay with a coconut tree lined shore. 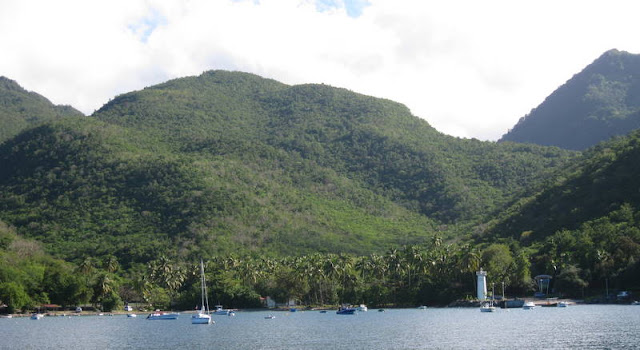 We caught up with fellow Aussies Sandra and Peter (Bondi Tram) and had a delightful evening with them before heading back to GWTW for an early night and a peaceful night’s sleep  in the nice calm anchorage.

As we had about an 18 mile sail ahead of us we left the anchorage mid morning as we wanted to arrive at a reasonable time at our next destination, the small group of islands at the bottom of known as "Isle de Saints". This group comprises of three islands with Terre de Haut being the larger more popular one. We anchored at the northern end of the main bay in a small cove named Anse a Mire. The shore line here was very picturesque, being lined with colourful houses and a lovely shaded sandy beach. 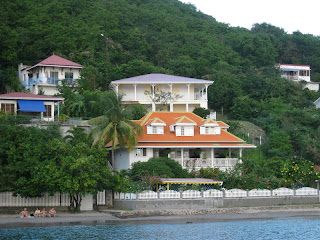 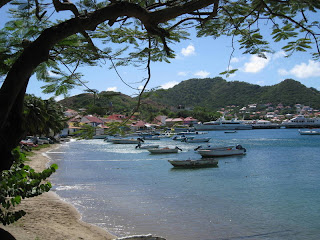 This area was a lot less crowded with boats and is well away from the small ferry wharf that offloads the day trippers who come across from the mainland of Guadeloupe and the other French to the south.
Our stay in these islands was short, only two nights this time. Ashore the pretty little village was bustling during the daytime but quite the opposite at night. There are a few restaurants and bars but nothing over the top and I guess that just adds to the laid back charm of the place. The main attraction here is the well preserved  19th century " with its naval museum and sun basking Iguanas. 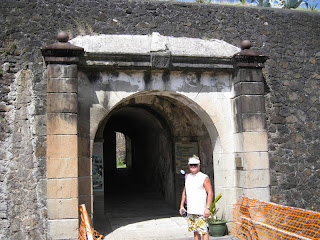 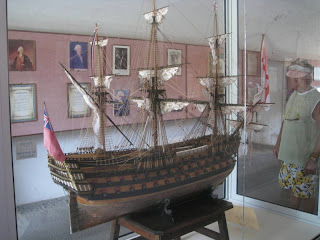 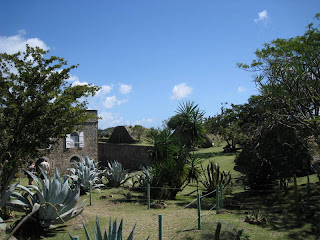 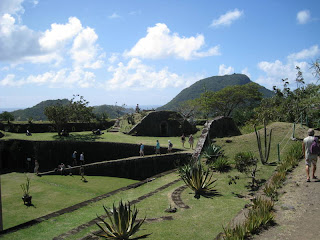 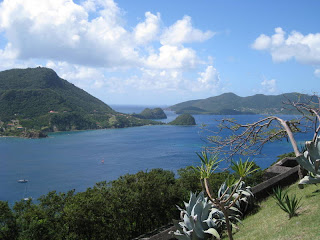 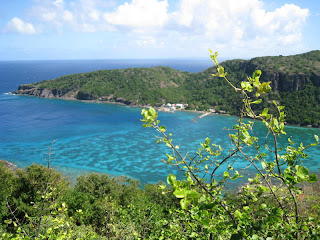 Unfortunately for us most of the exhibit signage was written in French, but we did manage to get the gist of it. The road up to the Fort is quite steep, they tend to build forts on the highest point of land, so most people rent a scooter, but at 40 euro for the day (the island isn’t that big) we decided the walk would do us good. The views from the top were great. Looking down on the clear waters of the surrounding bays and all the red roofed houses and green hills made us appreciate why people come to this little group of islands. On the way back down the hill we even spotted one of the Iguanas making his way across the road so that made Liam very happy as he is quite partial to reptiles in general. 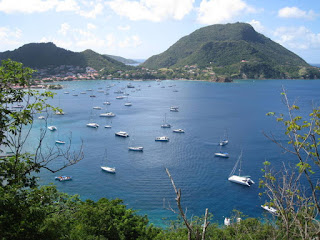 After our little burst of exercise a swim was in order once we were back on GWTW. Donning the snorkel gear we were quite surprised to find an old tractor engine quite close to our anchor. We had done the usual anchor swim the day before but with the fading light and being at a depth of 50 feet  had not spotted the highly potential  anchor snare.
This was not marked on the chart so we warned any other boats that came near us to find another spot. Luckily when it was time to leave the following morning we had no dramas, but we sure won’t anchor in that part of the bay next time. The small beaches off Ilet Cabrit and Anse a Cointe have been earmarked for a stop next time we are here. 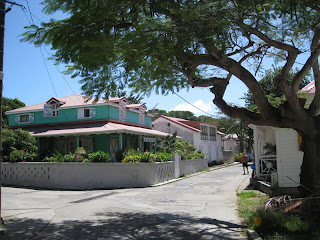 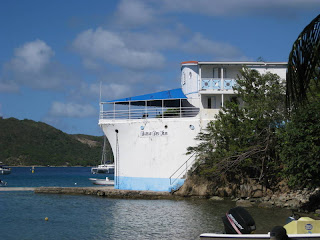 Some  houses were quaint & then there was the one that looks like a ship, and it has anchor chain!

These make a lovely laid back stop over and we’d thoroughly recommend them for a few days.