“All you  really need is Isabela” 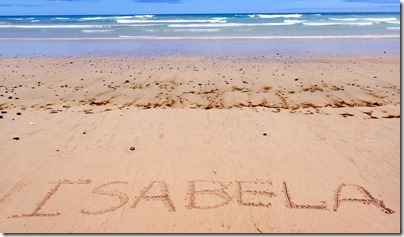 After a lovely  83 mile overnight sail from San Cristobal we arrived at Isabella at 11am. We spent the rest of the day trying to get in contact with our agent  so that we could get checked in and on our way to seeing the sights. I may have mentioned that the Galapagos is very restrictive with respect to yacht movements. This means that although you are limited to three ports only, you have to check in and out of each one paying a fee each time you do. By 4pm we finally gave up calling on both the radio and our cell phone and piled into the dinghy and walked the length of town until we found where the man lived. He was most apologetic for not answering  any of our calls and assured us that all would be taken care of tomorrow!  Just gotta roll with the punches sometimes.

Isabela is the largest  and youngest island in the Galapagos archipelago and consists of five intermittently active volcanos. The last eruption back in 2005 was from Volcano Sierra Negra which sent a plume of smoke and ash 20klm skyward. This eruption put Isabela on the map as far as tourism was concerned.  People wanted to come and see the Volcano. Little did they know that this island had the best of the best animals as well. 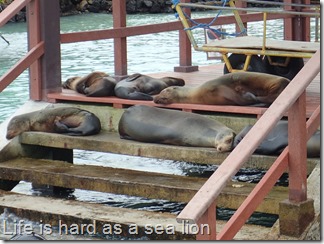 The Port of Villamil where we entered is the main town for the island. It has an excellent anchorage which is protected from the swell by small islands of lava rocks and mangroves. It’s a sleepy little place with sandy streets and a handful of bars, restaurants, and cafes. It has a country feel to it and we really like it so far. But before we could get out and see the place there were a few major jobs to do on GWTW. One of the hinges on our glass shower screen door sheared off on the way over and that had to be dealt with promptly, borrowing from Peter to pay back Paul as it was. So now our starboard shower has no door ‘till we can find another hinge and that won’t be easy. One of our bilge pumps failed so that had to be replaced and  after 13 years of work our screecher has started to delaminate, so down that came for repairs. The bottom of the boat is getting an increase of growth again and that took us several hours to clean. All these jobs were biting into our touring time but they couldn't wait. 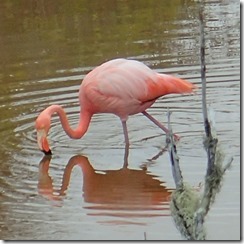 So on to the sights. First up was a swim with the sea lions in the mangrove lagoon just near the dinghy dock. I just love swimming with those guys, they are a real hoot, then it was a nice long walk on the boardwalk trail to see the beautiful pink flamingos. Flamingos have been illusive to us in the past buy today we got our flamingo fix. 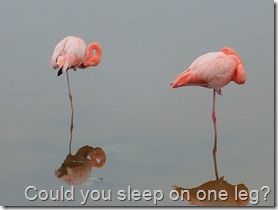 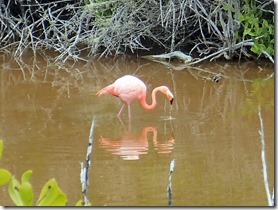 Later in the week we booked a  half day boat tour to Los Tuneles  and Cabo Rosa, 45 mins further along the coast. This trip was recommended to us by both our agent and cruising friends and it definitely lived up to all the hype. We booked with Rosedelco Tours and we really don’t think that there is a better outfit in town to go with.

The ride up there was thrilling as the boat captain raced the  breaking waves and swell into a narrow channel between the lava rocks, just feet away from crunching the hull. Talk about an expert driver. Once anchored we,  there were 10 of us, jumped overboard with our guide Edwardo into the very chilly 14c water. Within minutes we were face to face with sea horses, golden manta rays, white tip sharks and giant turtles. It was a wonderful experience and yet again we were up close and personal with these animals who have no fear of humans. 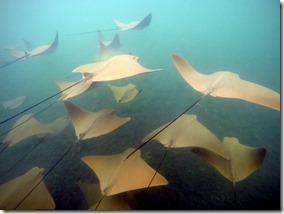 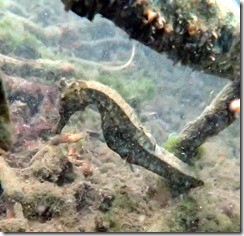 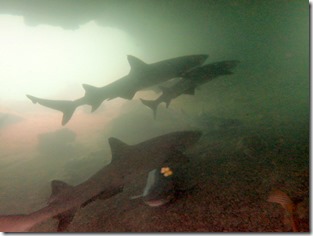 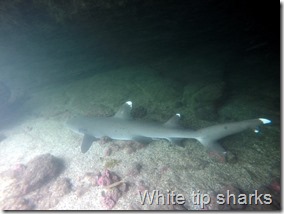 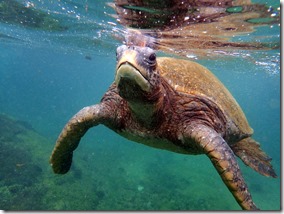 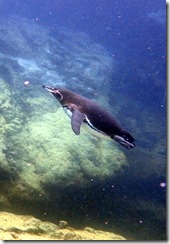 From here it was off to the actual lava tunnels. We swam through them, around them and over them.  Adding to the ever growing list of species we’ve seen so far were now penguins. They may only be small but man they are like torpedos in the water. I was lucky enough to have one whoosh by and my camera caught the shot perfectly.

It had  certainly been a jam-packed few hours so far but as they say you gotta leave the best till last. And so it was. After a hose down, a change of clothes  and a bite of lunch it was time for a little hike over the larva archways. And there waiting patiently for or us on the other side were the famed Blue Footed Booby birds which we’d been hanging out to see.

So far we’d only ever seen them flying high or nesting on far away rocks and cliffs and here they were just feet away from us. 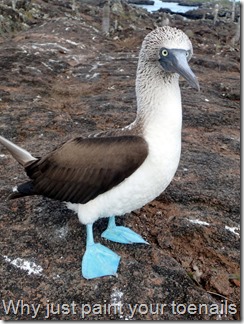 This time of year for many animals in the Galapagos is mating season and we were gob smacked when out of the blue a couple of them started doing what is called the Booby Dance. The male struts around showing the female some well rehearsed moves hoping that she will do him the honor of taking to the floor with him. Even though she may do a mirror image of his dance steps doesn’t mean that she’s accepting his proposal  just yet. 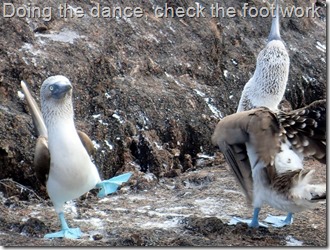 We waited and watched in silence and eventually after a lot of fancy footwork in a flutter of wings  and a  song in their throats ,the deal was sealed with a beak to beak kiss. They sure didn’t waste any time and before our group had moved off there were already picking up bits and pieces of twig to build their love nest.