Back To The Beautiful Bahamas

The day had started just the same as any other when there was a short passage involved. Wanting to arrive before dark we were up early  and on the move. Ahead of us lay the gulf stream and 50 miles of ocean separating  Miami from Bimini in the Bahamas. It was bright  and sunny with a just a zephyr of breeze, not enough to hoist the sails. Looked like we’d be motoring until the breeze came up later in the day.

About 20 miles out things started going pear shaped. Our depth sounder was the first fatality. Instead of giving a readout of numbers it showed only grey dashes. Not good when you are headed to the land of shallow water and reefs. This was followed closely by our log / speed readout pulling a similar stunt. More grey dashes of death. What the heck was going on? And not to be left out, our navigation program on the computer also jumped on the bandwagon. It had decided that one of us had fallen off the boat and put itself into the man overboard mode and frozen. I swear I could hear the voice of the computer from the movie Space Odyssey saying “don’t touch that, what are you doing?” every time my fingers reached out toward the keyboard to try to rectify the problem. Oh, and did I mention that our Raymarine plotter also decided to play dead! Had a black cat crossed our path, had we walked under a ladder or smashed a mirror? Was it Friday the 13th or had the CIA somehow beamed us up and dropped us down into the Bermuda Triangle? Ok so what to do. The only logical thing was to turn around and head back to the ponderosa. Or at least to somewhere we could get a phone signal and call a technician. Reluctantly that’s what we did. 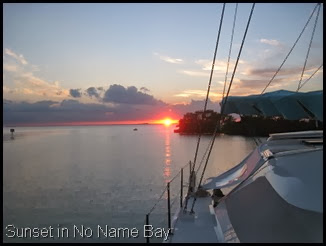 By 2pm we were back on the anchor in No Name Bay, yes that’s actually it’s name, but in truth it should have been called noseeum bay, as we were attacked with vengeance by these invisible creatures come sunset. On the way back just as weirdly as the mornings events had unfolded the depth sounder and plotter sprang back to life. The tech guy offered no solutions as to what might have caused the problems and we were bereft of ideas other than that some strange electrical spike had happened. .

Next morning we headed out again, take two. The seas were flatter this time and the breeze a little stronger so up went the sails and we clipped along nicely under main and jib.  Around noon the wind had come around onto the nose and we fired up the motor, time to put the sails to bed. The jib furled up nicely but as we dropped the main the outer core of the halyard shredded, jamming the main  2/3 of the way down. 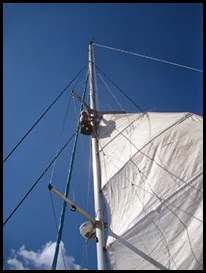 Liam hates going up the mast even when the boat is as still as a millpond and he really hates going up when we are at sea. But today there was no option, the only way to get that sucker down was to cut the halyard and that couldn’t be done standing on the deck.

With a plan in mind up he went and attached a second halyard to the headboard, cut the main halyard free and we lowed the sail back down to the boom. Just as well we’d bought that new halyard while we’d been in Fort Lauderdale!

The upside of the day was that we caught a good size Mahi Mahi. The first catch of the season, way to go. 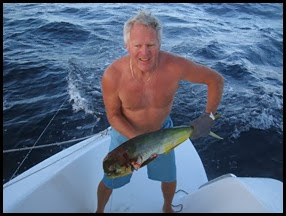 By 5.30 pm we had arrived in Bimini and had the anchor down. It was great to be back in the Bahamas again. With a not so great forecast coming up we knew we’d be in the anchorage for a couple of days. After completing our entry formalities and parting with US$300 we were officially allowed to go where we pleased for the next 180 days.

The first place we hit was the beach. We’d forgotten how fabulous  the water colour is over here. There just aren’t enough adjectives to describe it. We were mesmerized and could have stayed there for hours but there was a major job waiting for us back on the boat . 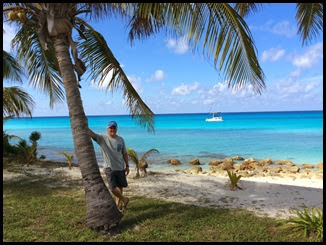 Most of the afternoon was taken up with Liam up the mast installing our new main halyard, which for some unknown reason happened without a hitch. By late arvo a line of squalls marched across the the sky and the rain and wind hit hard. Our anchor was dug in solidly and we felt very snug.

The heavy weather continued through the evening and night and at 1am something woke us, maybe it was just a feeling but we leapt out of bed and up to the cockpit. Horizontal driving rain and howling wind greeted us and not a foot away  was a neighbouring trawler which was bearing down on our port side. It had dragged anchor and the captain was standing in his cockpit looking like a deer in the headlights. He must have knew that he was going to hit us as he had already tied his dinghy to our bow . We quickly put out our fenders and suggested that to save any more grief he should side-tie to us until morning.

Including GWTW there were four boats in the anchorage. The other three all dragged their anchors. In the light of day the damage to our port bow was minimal, but it still would need repairing. Sadly, the couple involved in the incident offered no compensation for the damage and left the anchorage without even saying goodbye.

Once the weather settled down, we headed out over the Bahama banks to Chubb Cay, a run of 70 miles, The banks on average are around 12 ft deep and that , even for us, takes a bit of getting used to. On a clear day the aqua blue water seems to stretch out to eternity. The water is so clear that you can see starfish and turtles glide by under the boat. It is simply awesome. Being so shallow there is no fishing to be had so we busied ourselves with other projects. Yours truly did the washing while Liam started on creating a fish trap. 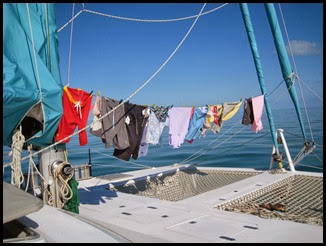 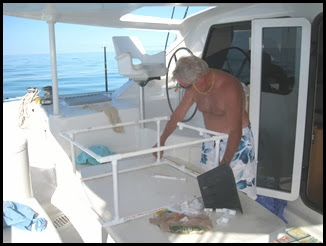 We made it to Chubb in time to watch the sun set and a beautiful full moon rise. It was Valentine’s day so we decided that dinner ashore might be nice. Bad decision, the food was terrible, we should have stayed home. 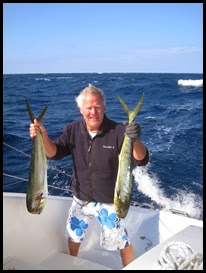 Athol Island near Nassau, a distance of 40 miles, was our next stop. In very lively conditions we left Chubb Cay under jib alone. Along the way we landed another two good sized Mahi Mahi. No prizes for guessing what was for dinner. From Athol another 30 miles east took us to Ship Channel Cay, a place we’d been told by friends that there has an abundance of lobsters just begging to be caught. An afternoon of hunting delivered no booty, bugger!

We were now in the Exuma chain of islands and we would be gunkholing all the way down to Georgetown. In our opinion the Exumas are the prettiest place in the Bahamas. Internet is hard to come by in these parts, so  my  next blog posting might be a few days away.  So stay tuned.

Email ThisBlogThis!Share to TwitterShare to FacebookShare to Pinterest
Labels: Bahamas 2014