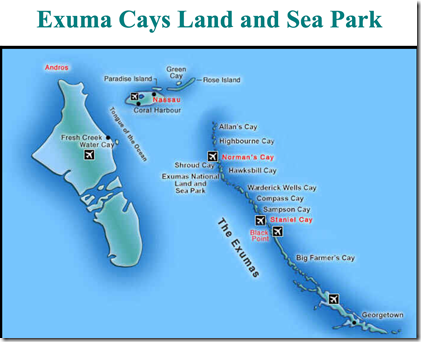 Shroud Cay is part of the Exumas Cays Land and Sea Park  which covers 22 miles from  Wax Cay Cut  just south of Norman’s Island to Conch Cut just north of Compass Cay. The park became a “no take” marine reserve in 1986 and was the first marine fishery reserve established  in the greater Caribbean. There are no commercial developments in the park, though there are a few privately owned islands. The Park is one of the most beautiful areas in the Exumas, with pristine cays, long sandy beaches and gin clear waters.

We spent two days here exploring the place. There are a couple of great inland mangrove creeks which we took the dinghy up, and came out on the Atlantic side of the Island. The beaches on this side were a little rough due to the wind but on a calm day would be magic. Even still this is where I had my first swim of the season and it was fabulous. 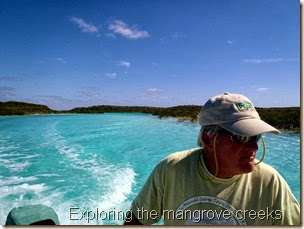 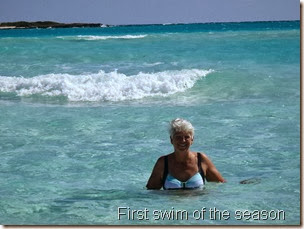 Also on this side  perched above the beach is a small clearing called Camp Driftwood. It was built in the 1960’s by a fellow sailor, a hermit as legend has it. He cut steps in the rock face and carried sand in his sail bags to build a trail to the top of the 50 ft hill. Picnic tables and chairs  were built from bits of driftwood that he found along the beaches, hence the name. Today the place is deserted but the magnificent views are still there. 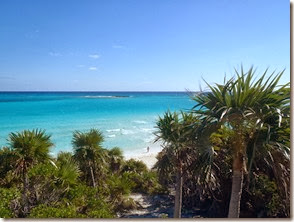 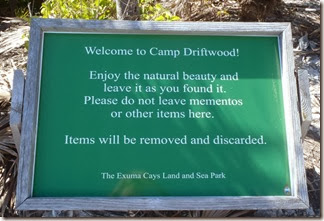 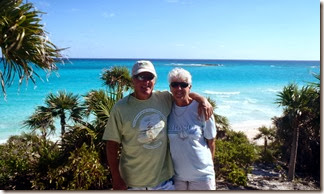 In the 1980’s Drug Enforcement Agents  from the USA used the site to spy on the drug cartel of Carlos Lehder who ran a cocaine operation from a small airstrip on Norman Island a mile or so to the north. They photographed every plane that landed and took off which eventually led to the demise of the drug operation in the area.

Moving on from Shroud Cay we had a brisk sail on flat water with just our jib down to Obrien’s Cay. A small  island named The Sea Aquarium is the main attraction here. It has a brightly coloured coral wall  with abundant fish life. Although we’d dived here a few years ago we just had to do it one more time and it was still as lovely as ever. 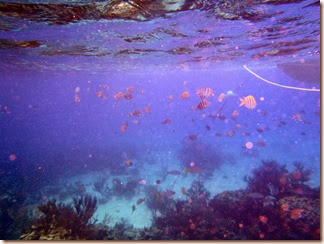 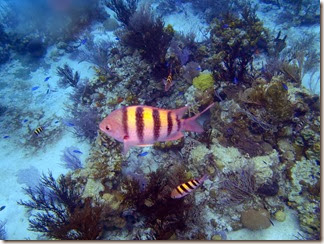 Our next anchorage was Big Majors Spot at Staniel Cay. Home to the famous swimming pigs, we spent several days here catching up with the little and not so little porkers. There had to be a least 15 little squealers running around on the beach this year and they hadn’t yet learnt the art of swimming from their parents. 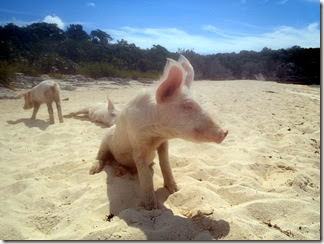 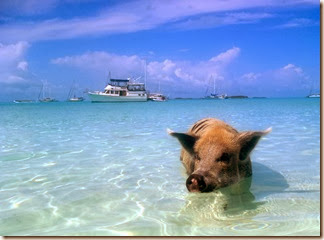 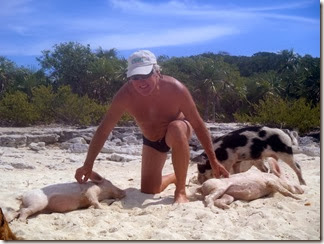 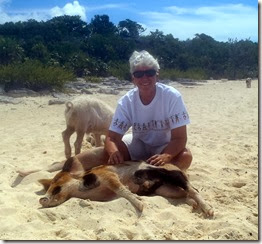 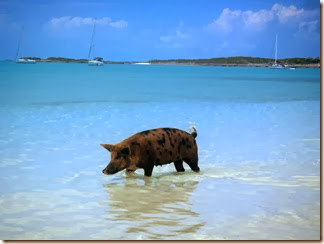 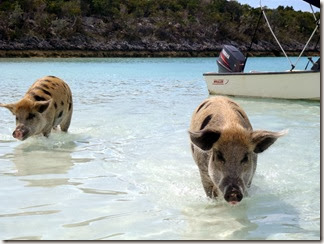 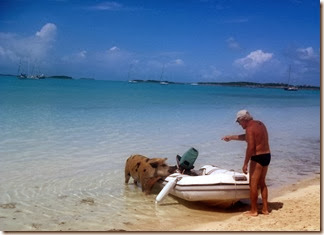 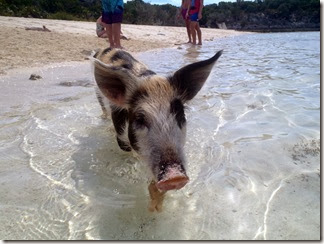 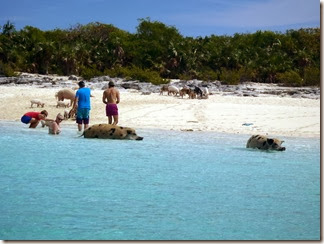 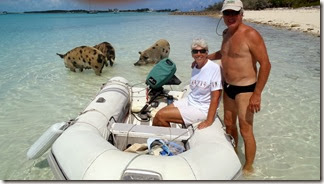 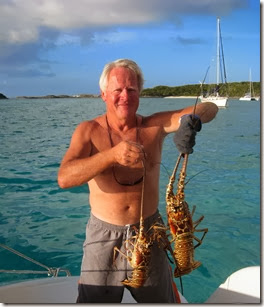 Liam spent a lot of time hunting  and catching lobsters with some new found cruising buddies from “Windflower”.  We ventured into the Staniel Cay Yacht club one day for a spot of lunch which was just ok and after spending $10 to purchase access to the Exuma Wi –Fi decided that it was a complete waste of money. We never could connect even sitting in the restaurant. Won’t be doing that again .

Next stop was 10 miles to the south at Black Point Settlement. A true Bahamian community, everyone greets each other no matter who you are or where you come from. Most refreshing. It’s a great place to stop when travelling south and has everything for the needs of those of us on boats. A well protected  anchorage, great laundry, a few places to eat,  free wi fi and a cafe owner whose mum Connie bakes fresh bread every day and sells it right from her kitchen bench. We strolled through town and chatted with a couple of women who were weaving  long strips of flax grass which they send to Nassau to be made into baskets for the tourists. They may have been old but there sure were dexterous with their hands. 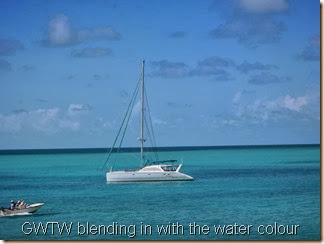 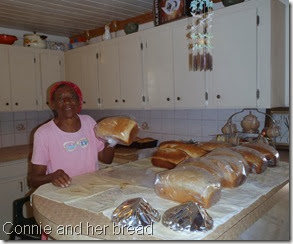 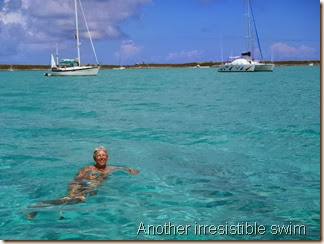 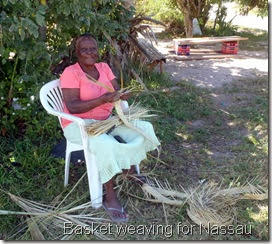 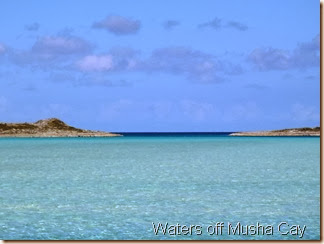 Musha Cay was a must for us this season . The island is owned by illusionist David Copperfield, and is the most perfect little cay we’ve seen. Surrounded by water just about every hue of aqua you can imagine, it certainly is a place to chill out

We’d heard rumors of an underwater statue that he’d commissioned but had not met anyone who had ever found it. After a little delving on the net Annie found the blog of a cruiser who had actually written down the Lat / Long of the spot. Armed with this knowledge, we anchored over near Rudder Cay and within minutes had found what we were looking for. There in 12 ft of water was a bronze mermaid resting on a  piano stool next to a full size grand piano. It was stunning and we were so glad we’d stopped there. It was a shame that the current was strong and we couldn’t get right down to it. We’ll stop here again next time we are passing through and maybe get a few better pics. 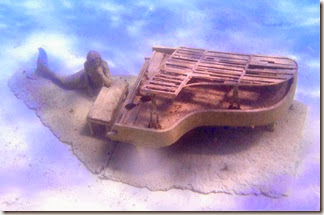 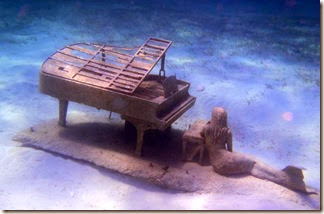 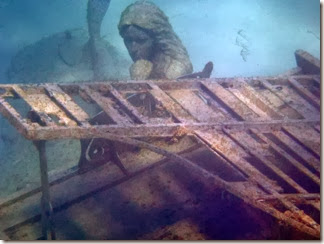 Time was getting the better of us and Pete our friend from Sydney was flying in to George Town in two days time, so we needed to get a move on. We had a great sail with main and jib sitting on speeds of 8- 10 knots all the way covering the 30 miles in just a few hours.

After a day of stocking up the larder, fuel, and collecting Pete are about to head down through the Ragged Islands and on to destinations south, Cuba and beyond. Were ready for some new adventures.

Email ThisBlogThis!Share to TwitterShare to FacebookShare to Pinterest
Labels: Bahamas 2014