Out and about in Portland, Oregon

It was odd coming back to the hustle and bustle of the land after our laid-back time in the San Juan Islands. Bob lent us his pick up truck to drive back to Portland and along the way we made a quick stop at Deception Pass. 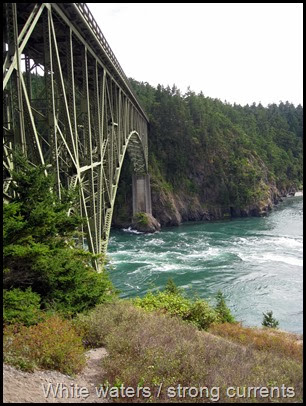 Not far from Anacortes, this gorge is known for the fast currents that run through it at speeds of between eight and ten knots. Only a foolhardy sailor would attempt to go upstream against the tide and we just happened to be standing there when one such person gave it a try. Pushing upstream was incredibly slow going for him. In 40 minutes he made very little progress and at times looked as though he was standing still. Every so often  the currents would catch his bow and inch him closer and closer towards the high rock walls. It looked to be a certain disaster from where we stood. 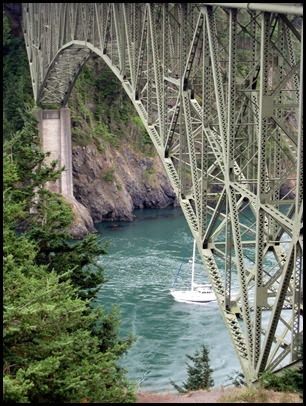 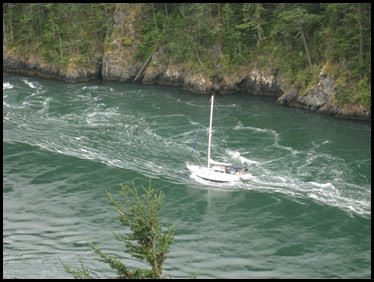 Eventually his boat was overpowered, the bow came around and the swirling current grabbed him and shot him back under the bridge and out into the bay like a popping cork. We reckon if he has any sense he’ll wait for slack tide next time. He came really close to losing his boat and that was something I didn’t want to get on video.

Braving the busy Sunday freeways we made our way through Seattle and back to B & B’s house in Portland where we were house sitting until our flight back to Thailand. Having about ten days up our sleeve we did a couple of day trips. One out to Astoria and the other to the Mt St Helen’s National Park. Astoria  is home to the Columbus River museum and we spent a few hours here boning up on the history of the canning and salmon industry which once thrived in this area. 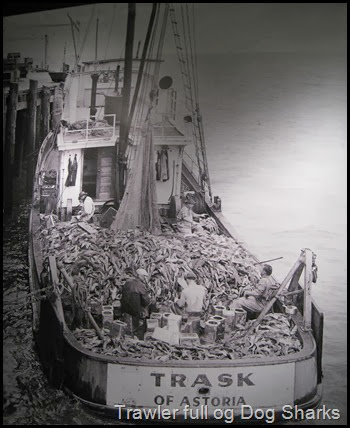 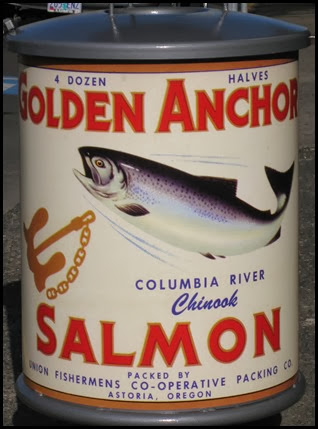 There were also excellent exhibits on the river and in particular the bar which has claimed over 200 large ships and the lives of more than 700 merchant seamen. Due to the shallow shifting sands and steady winds, waves can stand as tall as 40 ft in bad weather. Fog is also a major factor and the area is engulfed for 200 days per year. It is not a place for the faint hearted and is known the Graveyard of the Pacific. 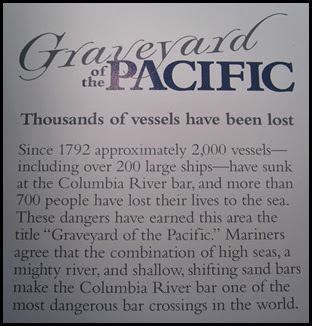 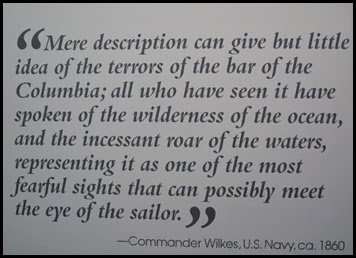 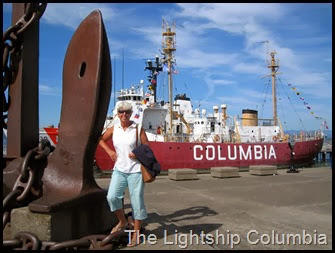 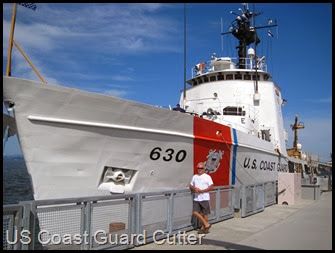 The Lightship in the photo above was stationed five miles out to sea from the mouth of the Columbia between 1951 –1979. She had 17 crew and was essentially a small town at sea. During the winter months they endured many gales and rough weather that prevented any supplies being delivered. The vessel was totally self sufficient carrying enough food water and fuel to get them through the bad times.The light from the ship had a range of 13 miles.

Salmon fishing, although not in the numbers described in the museum, is still alive and well in Astoria. The old canneries have now been converted into hotels but the charter boats still go out and bring home a goodly number of salmon.There were dozens of wheelbarrows full of salmon down at the local docks. 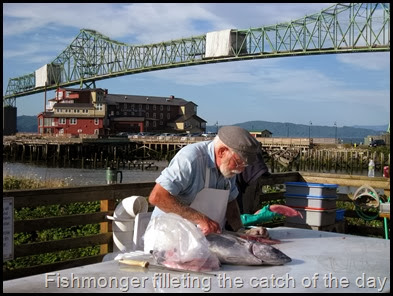 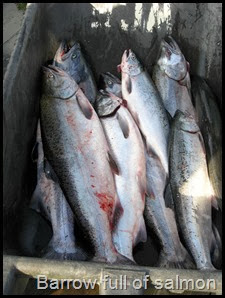 House sitting also gave us the chance to catch up with our friends the Osseys who also live in Portland. Bob, now living in Perth, was over from Australia visiting his family who we have known for a number of years and we all gathered for dinner at his brother Don’s home. It was great to be able to see everyone in the one place including Bob’s dad Bud who is a real card. Time was starting to run short but we did squeeze in a visit to a couple of Bobs’ brother Richard’s favourite Vineyards. 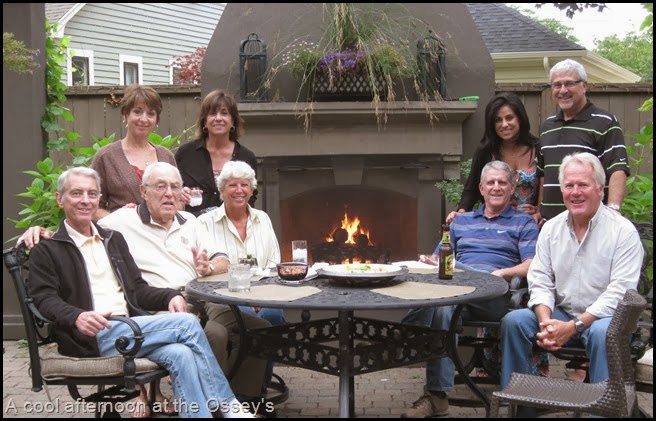 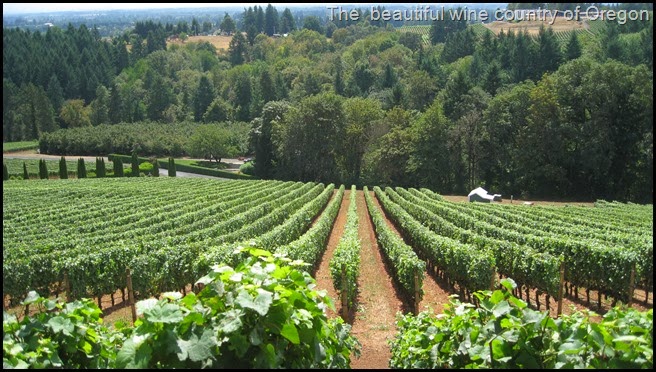 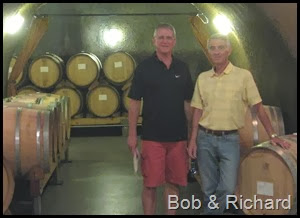 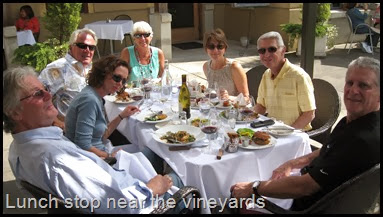 Back in the 90’s when we drove from San Diego to Vancouver Island we saw the signs pointing to Mount St Helens but didn’t have time to go there. This time we made time and it was well worth the drive. 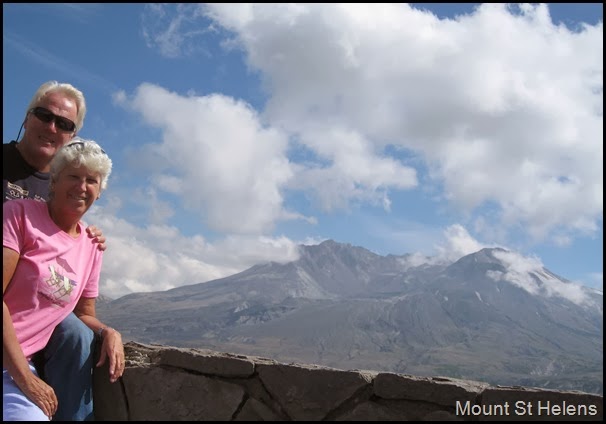 We stopped at two visitor centers on the way up to the last observation point and we were dumbstruck by the photos, movies and information that we saw and read.The following is  a compilation from some of the pamphlets  we were given by the park rangers. 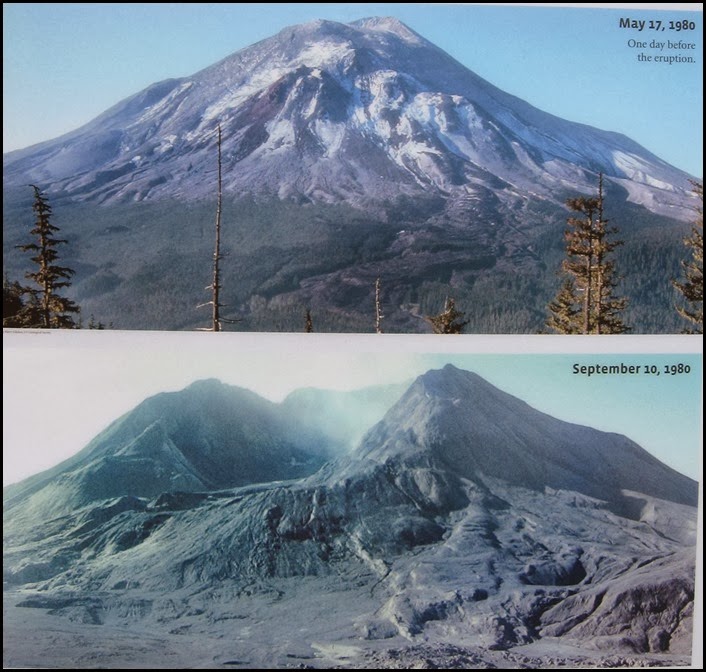 Mount St Helens had laid dormant for 123 years until Sunday May 18th, 1980 when it sprang back to life. There had been a few signs that the volcano was stirring. In March that year traces of steam and ash had wafted from a vent near the summit and small earthquakes had rumbled underground. But no one was prepared for what happened on that fateful Sunday. At 8.32am a 5.1 magnitude earthquake triggered a violent eruption, equivalent to 21,000 atomic bombs, which blew out a section of the north face of the mountain and caused the largest ever recorded landslide. Thirteen hundred feet of mountaintop collapsed in the Toutle River Valley below. Super heated steam, debris and gases shot up 60,000 feet into the air. Fifty seven lives were lost and 150,00 acres of state, national and privately owned forest land were devastated. 650 miles of roads,19 bridges and 16 miles of railroad were either buried in ash or washed away by mudslides. Hundreds of people working in the logging sites would have died had the eruption happened on a weekday. Even this many years on the blast area still looks like a scene from a Spielberg movie. 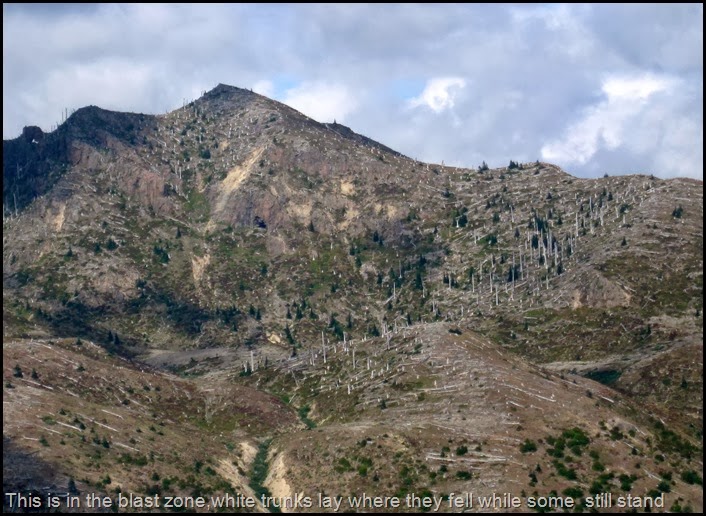 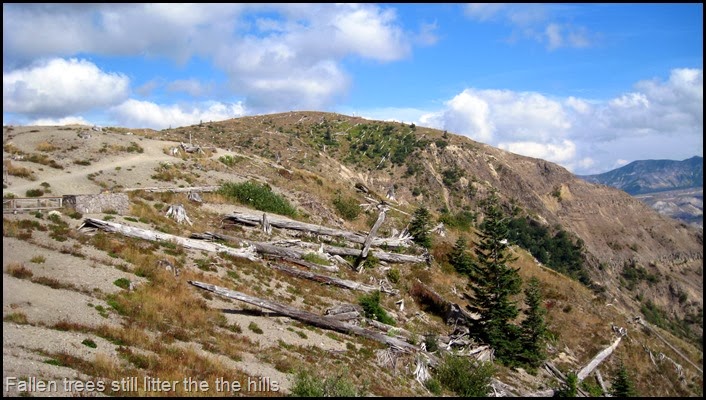 There is devastation and bare earth everywhere. Some tree trunks still stand, stripped of their branches and foliage. Part of what were once giant pine forests, they tell the story and are a reminder of the power of mother nature. Thousands of  people were involved in the salvage of the downed timber and during the summer months more than 600 truckloads of logs were removed each day. 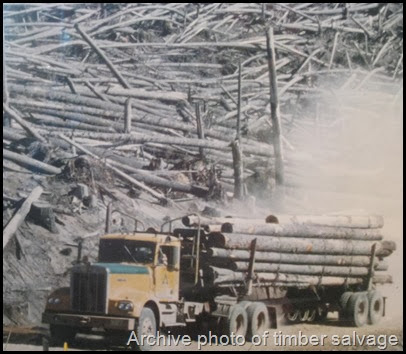 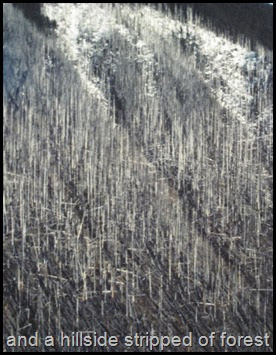 Nearly all life perished with in the blast zone, only a few insects and underground dwellers managed to survive. Slowly, both plants and animals have returned over the years but within the 6 mile radius of the volcano it still resembles a moonscape. 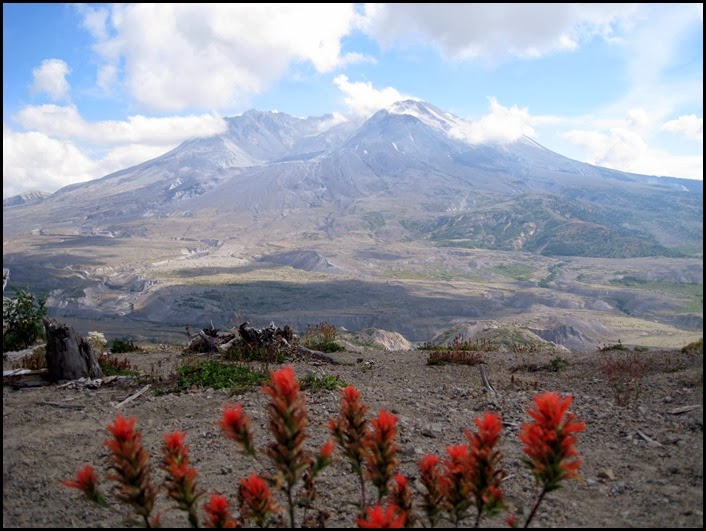 Driving back  through the National park we saw this sign on the side of a motorcycle and couldn’t resist snapping off a pic. 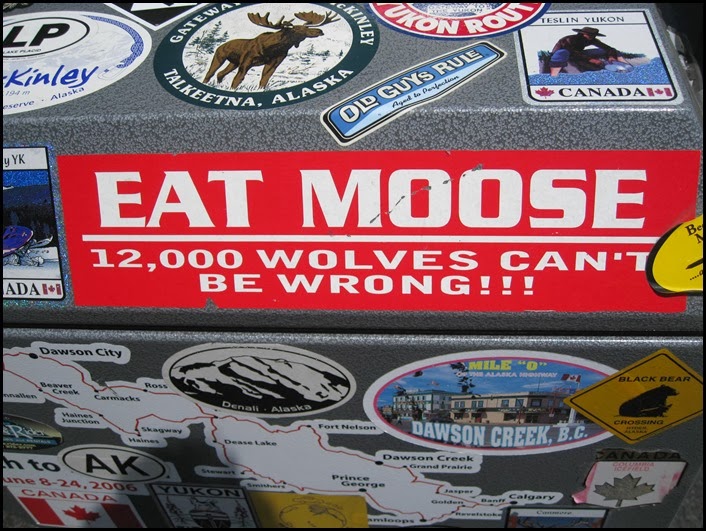 Also the next photo isn’t a  fuzzy photo of the pine trees, this is how they really look. We both started to get a bit dizzy looking at them so again I just snapped off a few pics and then kept our eyes on the road. 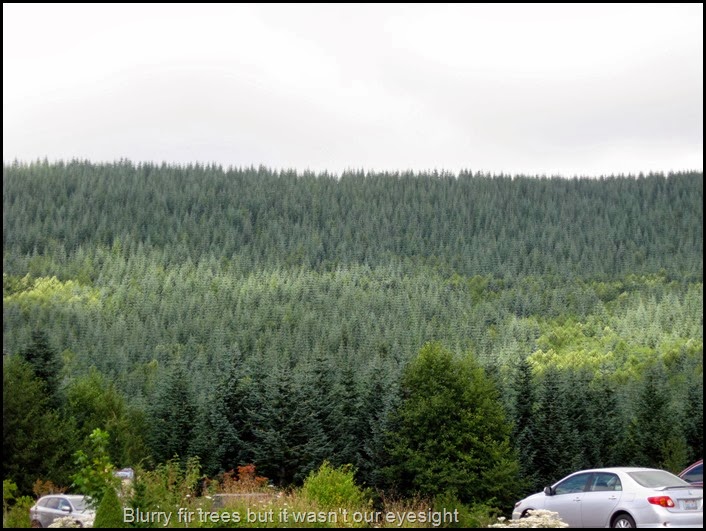 Meanwhile back in Portland we only had a couple of days to go and we kept ourselves busy packing up all our winter clothes to be shipped back to GWTW in Nth Carolina. We were pretty sure we wouldn’t be needing them once we got to Thailand. 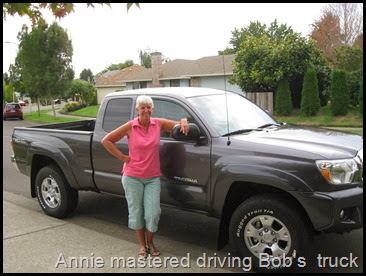 Visiting the Pacific northwest certainly wasn’t on our game plan for this year, but we are sure glad that it happened. We had a fabulous time seeing friends and places that we wouldn’t normally have. It was a great finalle to our 2013 cruising season. As with a lot of things in life, the best things happen when you haven’t planned it.

So where to next?? It’ll be two months at our place in Phuket Thailand and then on to Sydney for a spell.