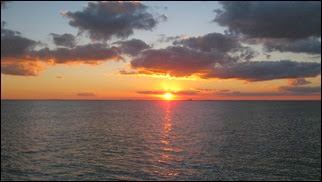 With the new year’s celebrations done and dusted now it was a case of sit and wait until all the marine business reopened after the holiday break. After many phone calls, taxi rides and bus trips, Liam found a guy who could make up a replacement hose for the hydraulic steering system, it wasn’t something that you could just rock in and buy off the shelf. Ably assisted by Terry from Cristata and Peter from The Southern Cross, Liam and the boys had the new system installed and up and running within a few days. At last we could move off the dock and go out to anchor once more.

We’d had a few 2am revelers  jump on board while we’d been tied to the dock. They were out for a good time and thought nothing of just hopping on to the transom and up the steps into our cockpit for a look around. I guarantee if our doors had not be closed they would have come right into the saloon. They got the a real shock when Liam jumped out of bed and asked what they wanted.

After some last minute provisioning  were were all set to go. Fort Lauderdale and Miami beckoned and with the former being just 30 odd miles away we decided, as a novelty, to try the Intracoastal Waterway route and see how 90% of yachts  that travel the east coast live, so to speak. As our air draft, that’s the trendy term for mast height these days, is 76 ft off the water we always have to sail up and down the coast in the ocean. No nice calm waters or going from A to B regardless of the weather for this pair of brown ducks. Those pesky 65ft bridges strategically placed along the waterway take care of those ideas. That is except for this one short stretch where every bridge is an opening one. 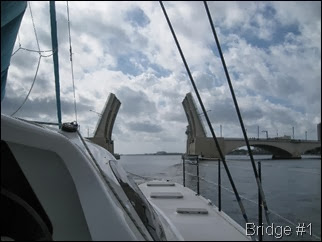 Nineteen bridges lay ahead of us between West Palm Beach and Ft Lauderdale and we knew that timing the bridges right meant that you could make the trip in a day. Our good intentions of a 7am start went by the wayside and a 10am departure seemed more realistic. By the time we got to the eleventh bridge the novelty of travelling along the ICW had worn off. It’s quite mentally intense watching the channel markers, the depth sounder and keeping the rev’s up to make the next bridge opening, and just to keep you on your toes the bridges aren’t all in sync. You miss one, as we did, and you are snookered. By late afternoon we decided to cut our losses for the day and anchored amongst the homes of the rich and famous at Lake Boca Raton. There certainly are some impressive mansions lining the waterfront in this neck of the woods. 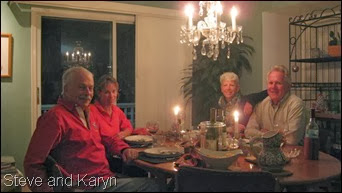 Next morning we hit the road early and arrived at Lake Sylvia in Ft Lauderdale just after lunch. Friends from Good Trade had been anchored there for nearly 3 weeks and it was nice to catch up again. American friends Steve and Karyn from Thresold, whom we met years ago when we were in the Med, live on one of the canals not far from Lake Sylvia. They invited us over to their place for a BBQ one evening which was a lot of fun and helped us out on a few shopping trips including a couple to the mother of all chandleries, West Marine. Our mainsail halyard was starting to get a bit long in the tooth and West Marine happened to have one day sale on ropes while we were in town. Never one to miss a bargain, Liam was out there early ordering the length we needed before they sold out.

As an added  boost to the Florida economy, or more to the point West Marines’ bank balance, we also became the proud parents of an additional freezer. It now occupies the front bed in our starboard cabin and will come in mighty handy when we are cruising in remote areas this year and especially when it comes time to cross the Pacific. Just when we thought we’d spent enough dollars in the sunshine state, our Mase generator went on the blink. A couple of hours and a few hundred bucks later the mechanic had it fixed  and it was all good to go.Next stop Miami.

Email ThisBlogThis!Share to TwitterShare to FacebookShare to Pinterest
Labels: USA 2014