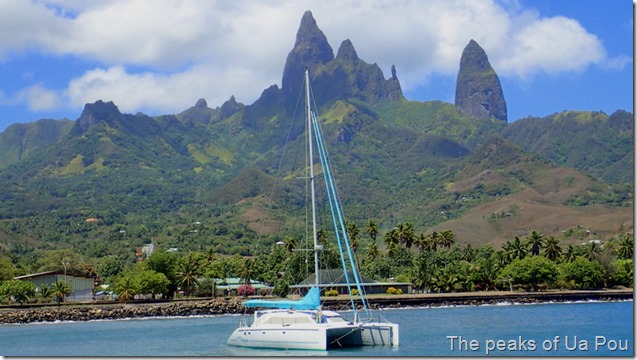 Leaving the main harbour of Hakahau we turned west with a lively easterly breeze pushing us along. Having spent ten days in the one place it was time for a change of scenery. We’d heard good reports of two bays on the western side of the island from  fellow  French cruiser Allen, who spends weekdays anchored in the main harbour while his wife teaches Spanish at the school. But come the end of class on Friday afternoons they head over to the west side for some R&R. It was only five miles until we rounded the north-western headland and sauntered down to Hakahetau Bay for the evening. The bay looked lovely and there was a hike to a waterfall that we’d earmarked for the following morning

Alas, we never make it ashore as a westerly swell rolled into the bay making for a decidedly uncomfortable anchorage and getting ashore was just not possible. 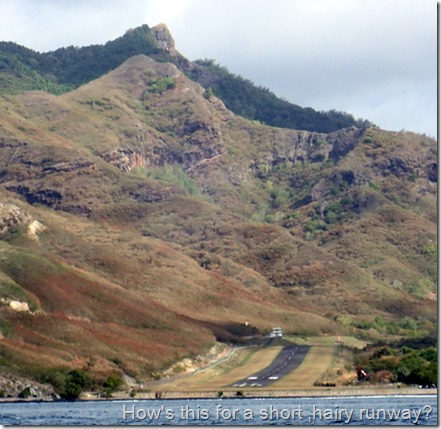 So come mid-morning we pulled up the hook and cruised another six miles further down the coast. We motored into Baie de Vaiehu which is snuggled under the lee of  Cape Punahu and figured it would be pretty protected from the elements. The sea floor gradually came dowm to a respectable fifty feet below us but bullets of wind were hooting down the mountain sides, so that earned it a black mark and off we went again.

There was one more anchorage on the list and once we turned into the bay it was as calm as a cucumber. No wind and no swell. Being the only boat  there we took up  the premium position in the dead centre of the bay. This would be home for the next few days while Liam got on and finished the fiberglass repair to the underside of the bridgedeck.  In case you are behind on your reading see the previous post as to why he has taken up this novel pass time.

Baie Hakaotu was a lovely anchorage with a small rustic home on the foreshore set back behind a few straggly banana trees. A pair of colourful outriggers graced the pebbled beach sitting high above the waterline. We  were convinced  that the place was abandoned  until the following day when two middle aged women rowed past and waved. 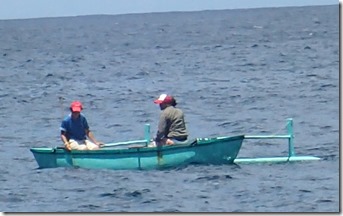 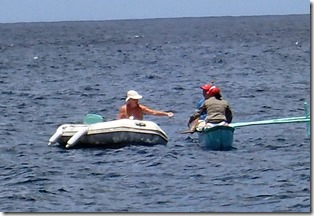 They spent hour after hour out in the bay fishing while the unrelenting tropical sun blasted down on them. So I sent my trusty runner out with a bag of  choc- chip cookies, peanuts and a couple of cans of icy cold sodas. In their broken english it was apparent that they much appreciated the gesture.

Time to get down and dirty.

GWTW’s in house Mr- Fix-It spent hours cogitating  about the work that lay ahead of him. He would only get one chance to do it right as the marriage of fiberglass and resin make a formidable team that once joined would not want to part company any time soon. At least that’s what we hoped.

The repair was not going to be easy in anyone’s books. Liam would be emulating Michel Angelo painting the sistein chapel but trading lying flat on scaffolding for lying flat in a constantly moving dingy. The result would probably not look like a piece of art but so long as it stayed up where it belonged we’d be very happy campers.

And so without further a do the fashionista donned his black and white attire and armed with the tools of his trade, set to work. 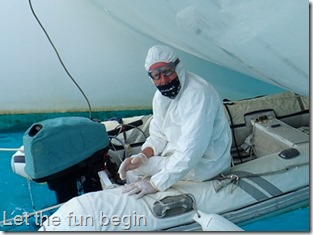 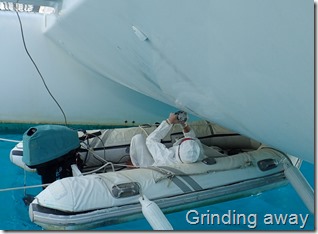 First up was a little bit of grinding. It was every boatwife’s nightmare watching all that nasty itch inducing powdery fiberglass dust float through the air coating anything and everything that dared get in its path.  But hey, who are we to complain in the name of progress.

As for his nibs, well he had a challange on his hands alright. It’s pretty tricky knowing at what point to stop grinding. He sure as hell didn’t want to get carried away and go right through to the other side and into the anchor well. He would’ve most definitely been crying in his beer if that’d happened and pounds to peanuts there would have been a fair amount of cussing thrown in for good measure. 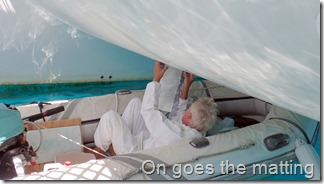 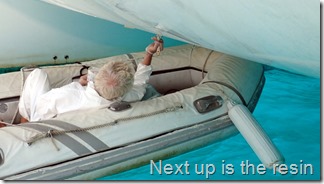 Once the business of grinding was successfully over the next phase was a bit of a race against the clock. After the dinghy was unlashed from its position under the trampolines, brought back to GWTW’s rear end and temporarily tied up, my boy bounded up  the transom stairs and into the cockpit. Within minutes the scene out there had taken on the look of the TV series “Breaking Bad”.  Our normally pristine cockpit  now closely resembled a backyard meth lab. Jars, tins and all manner of toxic smelling liquids were spread over the outdoor table.

My kitchen scales had been seconded and instead of weighing meats and poultry they were now laden with pieces of biaxial matting stacked up to get the “gram to resin ratio” mix just right. Plastic measuring jugs, paintbrushes and rollers added to the sinister looking assortment of wares.  Mixing up the resin and getting back up to GWTW’s underbelly to plaster down the matting before the hardener  started to go off was no mean feat, but in his perfectionist style Liam did it with aplomb. 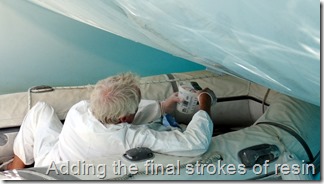 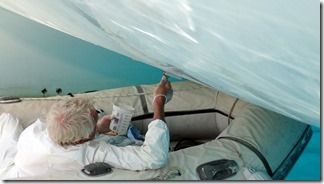 Now it was a waiting game for a day to see if the repair cured satisfactorily. Mind you the true baptism of fire would come when we headed out to Tahuata in 48 hrs time. Sixty five miles of ploughing east into medium sized waves for just over twelve hours would show which way the cards  would fall..

During the passage across we were like cats on a hot tin roof flinching at every loud noise we heard, praying that the repair job was holding its own. Thankfully the end result was good. There appeared to be no further signs of damage which as you can well imagine was a great to relief to both of us. 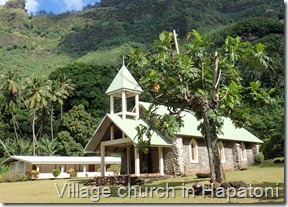 We stayed on the island on Tahuata for a couple more days, once again enjoying the beauty and tranquility of Hanamoenoa Bay. We also had the opportunity of catching up with new friends and  fellow  SSB  radio Poly-Mag netters, Mike and Shelly from “Avatar”. We’d spoken at length over the airwaves  of late and at last we got to meet them  before  our wakes parted and we headed further south to Hapatoni Bay and it’s tiny village of friendly people. 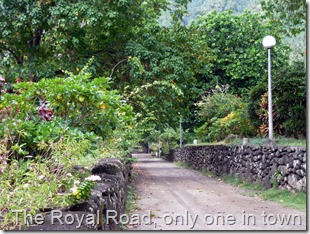 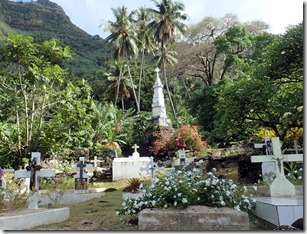 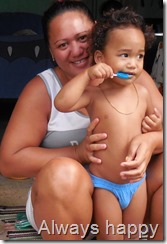 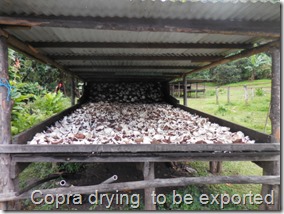 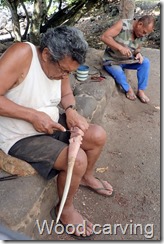 Our time in this majestically beautiful island chain was rapidly coming to an end but we were saving the best for last.

The most talked about and photographed bay in the Marquesas was next on out list.