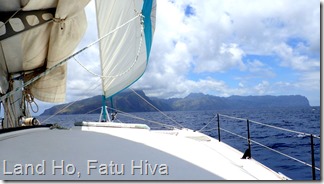 At last we’ve made it to Fatu Hiva, a magical place that most cruisers dream of making their first landfall in the South Pacific after many weeks at sea during their Pacific crossing. For us though, our time here would be a goodbye to the Marquesas rather than a hello. Fatu Hiva would be our final destination in this remarkable  group of islands known as Te  Fenua Enata, or “The Land of Men”,  where we’d spent just over two months

We were lucky to have a great weather window for the 35 mile passage across from Tahuata, nothing over 15 knots of wind was forecast and it was from the north east, the best direction when sailing south east. We smoked along averaging 8 knots and hitting 14 knots a few times  with a reefed main and half jib.  Picking up the outline of the island quite some miles out, as we got closer the towering peaks began to show just how high they really were. Dropping the sails we motored into the north-western bay known as Hanavave. In Marquesan, which is still wildly spoken in these islands today, this name means “strong surf bay” which would be quite applicable with a big westerly swell rolling in. Thankfully none of that was forecast for our short stay here.

So down went our anchor on the not so hospitable rock ledge bottom. We said our prayers that we’d hook onto something solid down there and awake  tomorrow still in the same spot, rather than having had an unwelcome and unexpected o-dark-hundred departure to the Tuamotus, 400 miles further west.

Apparently the early explorers, who as you would expect didn’t speak Marquesan, named this bay  Bay des Verges (bay of the Phalli aka Penis) because of the shape of the spire-like pillars reaching skywards. However, when the missionaries turned up many moons later they were aghast at this name and took it upon themselves to stick an “I” in Verges, thus turning it into Vierges, meaning “Virgins”. The name has stuck for all these years but the missionaries could do nothing about the design of the rocky spires.

Once settled we sat back glass in hand and took in our fantastic surroundings. It was a truly spectacular scene, particularly with the setting sun casting it’s orange glow over the rock face. Towering way above us were bare basalt spires shooting towards the heavens at over 500ft. 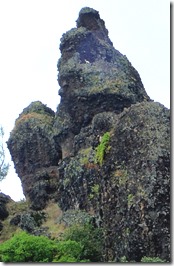 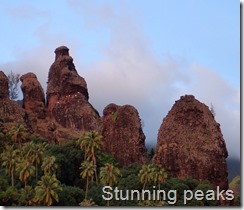 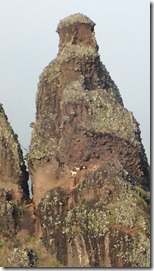 Scrubby vegetation and tall coconut palms graced their bases while further up a herd of goats stood motionless on rocky ledges contemplating  whatever goats contemplate.  Further towards the top, the upper echelon of the herd looked down from  their vantage point of a large cave, surveying their domain below.These guys have absolutely no fear of heights, mind you their choice of rocks to teeter on did make us wonder just how much grey matter is between their ears. In the two end photos above the white specks are goats.

There was only one other boat anchored in the bay so we stopped by for a chat. Atilla, a solo sailor from Hungry, told us that the Aranui 5 would be arriving in Omoa, the next village south  the following morning and then continuing back up here to Hanavave. Joy of joys, that meant we could buy fresh produce, something that we were running low on and get two bites of the cherry in case we missed out on something in Omoa. 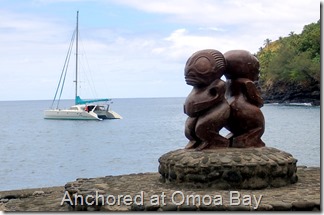 We had wanted to see the southern village so now we had a good reason to go there. Most cruisers, rather than taking their own boat, pay a local around 7,000f francs (US $70) to take them by fast runabout down the 3 mile sea trip or pay an outrageous  US$150 to travel the 17km road journey to Omoa. We decided that their was no  good reason not to take GWTW down ourselves. So we headed off next morning arriving in the anchorage around 10am. Unfortunately the ship had already unloaded the supplies and  by the time we arrived at the shop the only veggies left were a few  cucumbers and tomatoes. Better than nothing though.

The  village welcome for the ship’s tourists had also come to an end meaning the Artesian Centre jewellry and craft display was all done and dusted as well. The happy buyers were already queuing up at the dock for their ride back to the ship. Further up the street back at the grocery store a couple of brand spanking new bicycles which had just been unpacked from the ship were being put together while a couple of beaming faced kids waited patiently on the sidelines. It was just like Christmas come early. 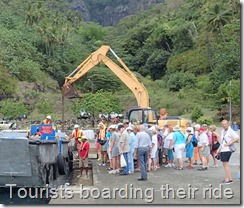 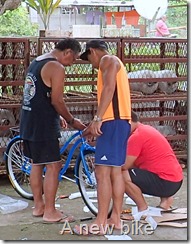 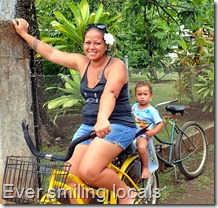 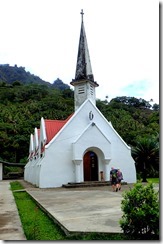 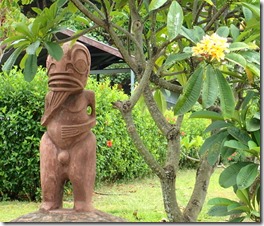 We had a nice stroll through the village and stopped by the ever so cute catholic church.

The tourists had all gone now and we were the only non locals still walking around. I guess it was pretty obvious that we were the cruisers who were off the only boat anchored in the bay. Maybe the bag full of groceries and my laden backpack gave our game away. 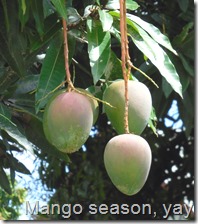 As I stood admiring a huge mango tree in someone’s yard a nice young man under the direction  of an older woman began pulling down the ripe and not so ripe fruit and piling them into a bag.

The young guy then walked over and gave them to me. I offered them some money but they flatly refused to take it. That’s just how these people are. 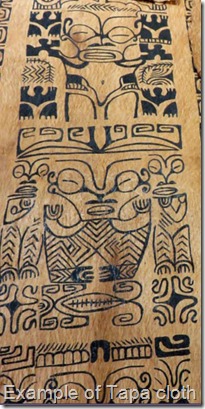 We still wanted to find some Tapa cloth and asked a young girl  passing by if she knew of anyone selling some. She told us to follow her and led us to her grandfather’s house. He was a lovely elderly gentleman who made the cloth in his home for export to the markets in Papeete.

Fatu Hiva is the only island in French Polynesia which still makes Tapa. It is a paper like cloth made from the bark of banyan, mulberry or breadfruit trees, which is beaten thin, dried and then  decorated with traditional designs.Before the arrival of the Europeans this cloth was primarily produced for use as clothing fabric and also for wall art as it  still is today. After working out an agreeable price for both parties we happily left his home with three small tapas tucked under our arms. 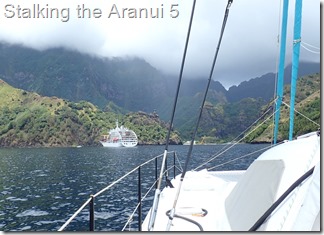 A couple of hours later we were on our way back to The Bay of Virgins in hot pursuit of the Aranui 5 which had just anchored and was already in the process of unloading supplies. This time I was Johnny on the spot at the only small grocery shop in town.  The local ladies and I, perched on a small concrete wall, formed a gallery as we watched the supplies being brought from the dock via forklift up the main street and deposited on the footpath out side the store. 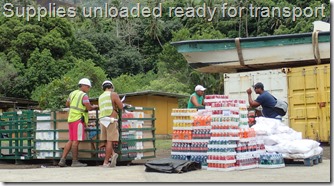 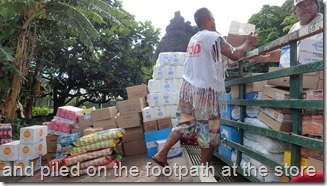 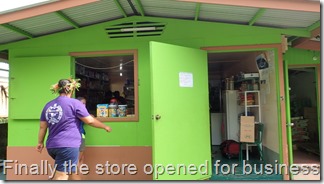 Then a human chain of beefy menfolk  arrived pitching in to move the supplies from the footpath into the storage room beside the lime green painted store. After an hour or so  the inventory  check was complete and in a very orderly fashion we ladies were called into the tiny store. I must add that as we all sat waiting patiently a never ending stream of tourists from the ship happily snapped away taking photos of us. Have these people never had to wait for a store to open?

Polynesian women are generally on the larger side of life so it was quite a squeeze with eight of us inside. Still we all seemed happy with our purchases which for me was two nice heads of lettuce, bok choy, grapes , potatoes, onions, cheese and a few staples. It  really pays to be in town when either the Taporo cargo ship or the Aranui arrives. But if you are a day late or even sometimes just a few hours, you will likely miss out on the good stuff. 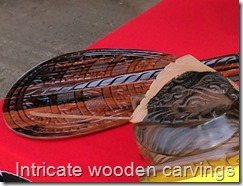 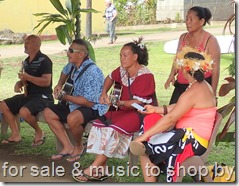 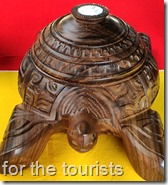 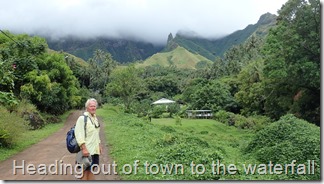 Day three of our stay we decided to hike to the waterfall about one and a half hours walk out of the village. The morning was overcast and not long after we’d set out the heavens opened and down poured the torrential rain. We took cover in an abandoned shed along the dirt track and then eventually once the torrent dwindled to light rain we continued on. 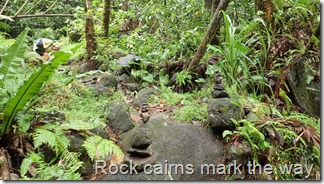 The path took us through a couple of babbling streams and along a well trodden track marked by stone cairns to show the way. It would have been pretty easy to get lost without them. Up and up through the thick foliage we trudged, finally arriving at the waterfall. We had intended to take a swim at the bottom of the falls but with the earlier heavy rain the water was now somewhat muddy and rather uninviting. So after a snack break and a few photos and we were on our way back down again. 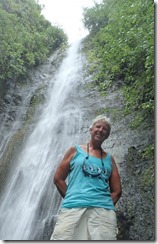 On our way back to the boat we stopped at Henry's house who I had met the afternoon before as he exhibited some of his woodwork for the Aranui tourists. I had said that I would come and buy something from him after our waterfall hike, but I reckon he figured we’d be a no-show. He was quite delighted when we showed up in his garden. His whole family came out to welcome us into their house where we negotiated a price for a small tiki and a lovely carved turtle, over their kitchen table, Henry was in the process of carving both a large wooden tiki and a granite one for an exhibition in Tahiti later in the month. Apart from our purchases  he whipped out into his garden just as we were leaving and handed us three oversized pamplemoose as a gesture of thanks. 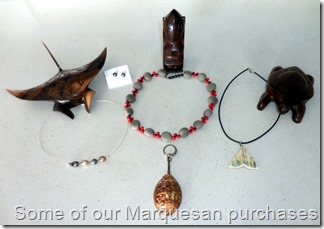 On the walk back we were befriended by Jacques and during our short conversation we told him we were leaving for the Tuamotus tomorrow. He asked if we needed any fruit but having already procured a hand of bananas and been given mangos, pamplemoose, lemons and limes we thanked him for asking and went on our way. Later that afternoon he swung by the back of the boat and handed us half a large wahoo that he had just caught, it was so fresh it was still warm ! 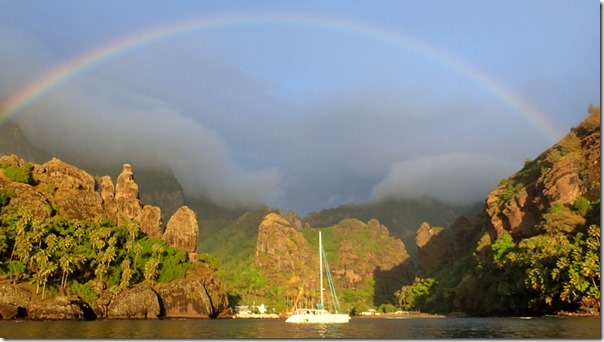 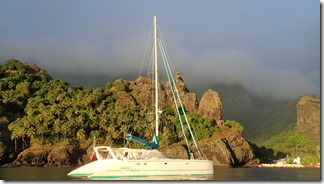 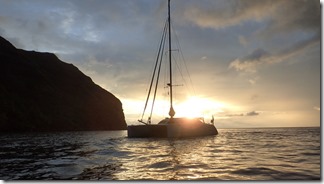 I know we’ve said it before but the Polynesians and especially those of the Marquesas are the most generous, warm and friendly people we have ever met. In this frenetic world that we live in it’s hard to find a place that is so special and unspoilt by tourism that it makes you want to sail across the Pacific just to spend time here again. We really liked our time in Fatu Hiva but as always it was time to move on. Next stop is the Tuamotus. 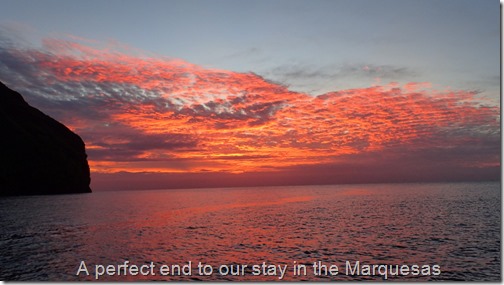