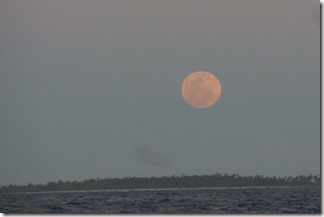 Exiting the pass at Raroia a beautiful full moon rose behind us. Our next destination, the atoll of Makemo, lay 70 miles ahead of us. Wanting  to arrive just as the tide turned meant that we really had to pull in the reigns on GWTW, so we opted for running with only the jib. The mainsail would not see any action on this doddle of a passage.  By midnight we had rolled away one quarter of the jib in order to slow us down even more. The sea was flat and the full moon lighting the way was making for an ideal night’s sailing. 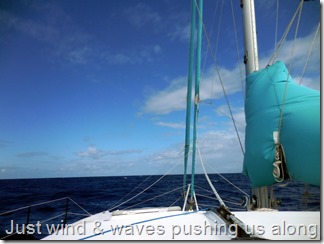 Around 4am the wind increased to 15-20 knts  so we furled what little of the jib was still out and glided downwind under bare poles. Even with no sails up it looked like we were still going to arrive too early. The dawn revealed an overcast sky and a choppy seaway of around 5 ft, not the most ideal conditions to make our debut into Makemo if conditions didn’t improve.

Arriving at 1030 we hung around out the front of the north-eastern Arikitamiro pass for about a half hour as the wind kicked up the waves. An hour later conditions were beginning to slowly settle and we decided to head in even though the outgoing tide was in it’s last stages of running. Heading in was a little boisterous for maybe five minutes, but once inside the lagoon was as calm as a bathtub. 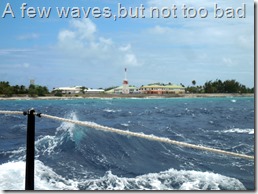 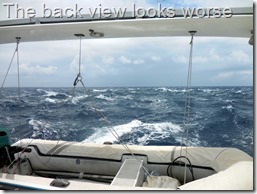 Being the weekend the village would be in chill-out mode and what shops there were would be closed until Monday, so we decided to head to the southwest corner of the atoll and we were glad we did.

Running along the shoreline was an unending band of aqua water punctuated by splashes of green with small motus covered in swaying coconut palms. It was a stunning scene. We found a suitable spot behind a heavily wooded motu and crept forward to a sandy patch surrounded by a few well spaced coral bommies, dropping the anchor in 25 feet. The clear waters beckoned and we couldn’t help ourselves but to dive in. 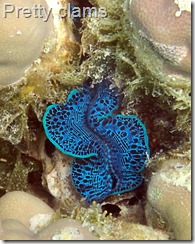 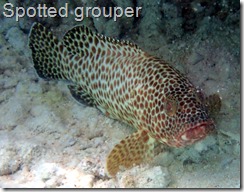 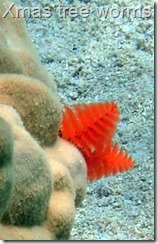 The next three days were spent meeting our aquatic neighbours. Some obviously had cousins on other reefs we’ve visited during our travels in years gone by but there was also a goodly amount of new faces that we’d not encountered before. With oodles of small bommies within easy swimming and dinghy distance from the mothership and we investigated them all. Liam, the relentless hunter and gatherer, spotted a nice size camouflage grouper about 15ft down which on which he tested his spear gun technique. Shortly after, said  grouper became barbequed grouper. And no, it wasn’t the cute one in the photo above. 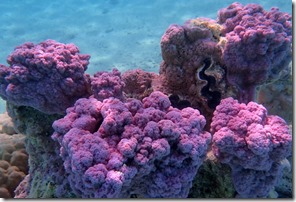 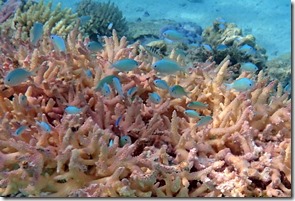 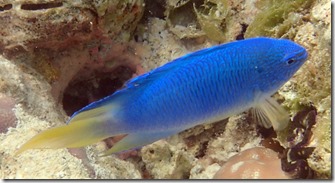 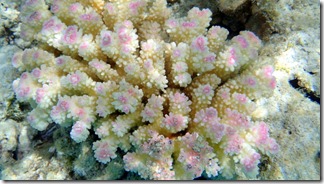 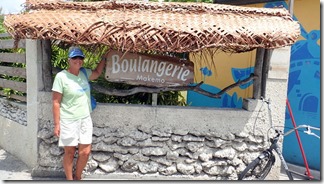 The lure of eating fresh baguettes meant leaving this little slice of heaven so we retraced our steps eight miles back to the village. We tucked in behind the town dock and dinghied in. In my best but very poor French I asked where the Boulangerie (bakery) was and was delighted when the response came to ‘allez tout droit, la maison blu, a droite”. Go straight ahead, the blue house on the right.

So down we toddled and there it was, well you really couldn't miss it with the big sign outside. We bought our baguettes and a couple of other things and continued on our walk. The place had a distinctive purple feel about it. Maybe the mayor liked that colour, or the villagers had a vote on it or that colour paint was the special of the day but for whatever reason the fences along the main road, the school and some of the building are, you guessed it, purple. 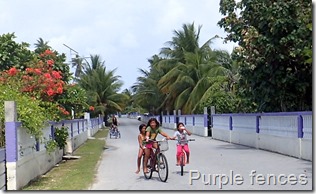 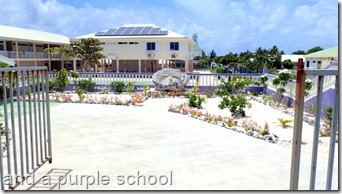 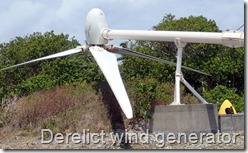 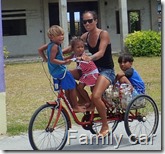 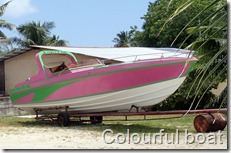 During our walkabout we spotted an abandoned wind farm, not that there isn’t enough wind here to support one ‘cause there most certainly is. The trade winds blow day in and day out in this part of the world. The site looked very sad, an ambitious dream now defunct. There were at least six wind machines lying in various states of rusting decay on the ground. As with all the islands of French Polynesia that we’ve seen so far, solar power is  now king.  The streets of Makemo are concrete paved and the houses and yards tidy. Colour fills the flowerbeds and bicycles and tricycles are a familiar mode of transport. There are cars and utes but the peddle pushers  hold their own here. 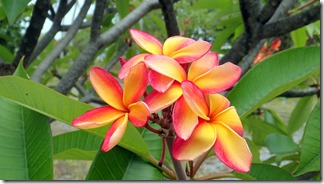 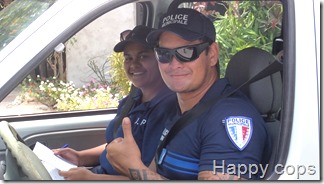 We weren’t long back on board when some interesting splashing not very far away caught my eye and through the binoculars I spotted some whales. Not wanting to miss out on some up close and personal time with these magnificent creatures, Liam and I jumped into our trusty ride and headed out towards them. At least six big humpbacks were putting on a marvelous display as they frolicked in the calm clear waters. No one else in the anchorage had spotted them so the show was all for us. I captured some of it on video and when I have a fast internet service I’ll add it to this post. For now a few still shots will have to suffice. 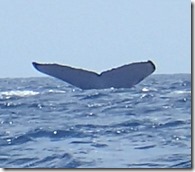 While near the village we attempted our first pass snorkel. Liam rode shotgun as I jumped in.The current was getting along at a fair clip but I did see a few sharks, which really spooked me, lots of small fish which didn’t and walls of coral that disappeared into the abyss before I called it a day. 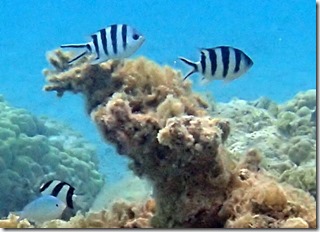 We sailed up to the western  end of the atoll and spent a couple of days there doing all the usual water based activities  before heading out for another overnight run to our next atoll, Tahanea, 42 miles further west.

So many atolls, so little time.