You may remember from early post  that I mentioned we had a rather sporty crossing from Nuku Hiva to here on Ua Pou. Quite a few big waves slammed  beam on to our port side which resulted in way too many nerve shattering moments for our liking.

As these waves passed under the belly of GWTW she came back down to the water’s surface with considerable force.  OK, so now fast forward to a couple of days ago. While swimming around the boat I noticed what I thought was mud splashed up on the forward underside of the bridgedeck just  back from where the trampolines join the deck. The mud I naturally assumed had flicked up off the anchor while we were pulling it up  when leaving Nuku Hiva. I reached up to try and wipe it off and that’s when I saw it. It wasn’t mud at all, it was a jagged crack through the fiberglass which was exposing the inner brown core of foam. Well you can imagine what went through my mind. 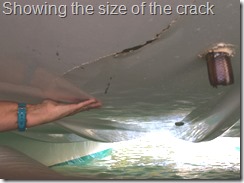 When Liam came back from an errand to a neighbouring yacht I said that he better get up there quick smart and check it out. He came back with a look that I’ve seen too many times when something goes really bad. He confirmed it was a crack and it was not good. First thing to do was look on the other side of the crack which meant the anchor well where 275 ft of chain bunks down when not in use. Yep, the crack was visible there too. 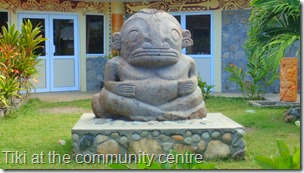 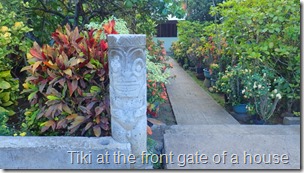 Many expensive phone calls via Optus roaming were made to the builder back in Australia as to ascertain the best way to repair it in such a remote location. Pulling  GWTW out of the water would be the best solution but at this point was not an option.

We had a limited supply of biaxial fiberglass matting onboard but we’d need a heck of a lot more. The only place we would be able to source it would be in Tahiti. We enlisted Andy from “Eye Candy” to  do some ground work for us as he was currently in that neck of the woods. He come up with a plethora of ideas, one of which we ran with. 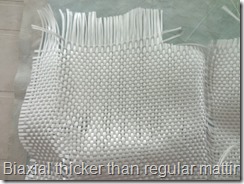 We contacted a chandlery in Tahiti who told us he had exactly  what we needed, so we then set about getting it delivered asap. Next up we got on the phone with our yacht agents from Tahiti Crew Agency and the following morning one of the girls had hightailed it out there, picked up our package and delivered it to Air Tahiti’s freight department to be airlifted out on the next flight to Ua Pou. Those girls at the agency are really switched on I tell you. 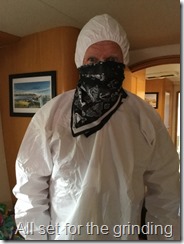 The package arrived midday Saturday and Jerome from Pension Pukuee, (our guide from our day trip) organised for an airport worker to bring it to town after his shift finished. Since then Liam has been grinding, fiberglassing and reinforcing the anchor well. His next chore will be to attack the underside of the crack and do the same, but that requires a very calm anchorage as it all has to be done while in the dinghy. In the meanwhile he’ll waterproof the exposed crack using Loctite Marine Adhesive Sealant.

We don’t know for sure whether the crack was the result of the recent passage or if had just  been slowly weakening at that point over the last thirteen years and 10 days. Yes, all that many years ago on October 6th 2004 GWTW rolled out of the factory where she was built  in Murwillumbah on the north coast of NSW Australia, and got her feet wet. Since that day our anchor has been raised and lowered thousands of times. The chain has thumped in and out of that anchor well  and like a well trodden step the surface eventually gets worn down which is the likely cause of our problem.

We have our fingers and toes crossed these repairs will safely get us 500 miles across to our haulout yard on the atoll of Apataki in the Tuomotus. If it does and there a no further issues a more effective repair will be undertaken once we reach New Zealand  sometime in the future. 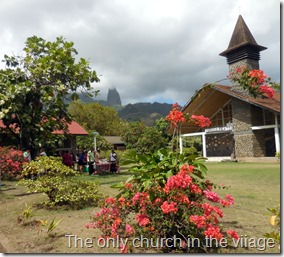 In the light of our recent incident and with it being Sunday and all, we took the opportunity to attend eight o’clock Sunday Mass. The church was packed to the rafters with adults of all ages, teenagers, toddlers and those too small to walk. The master carvers have done themselves proud in this church. The pulpit was made from solid timber carved in the shape of a ship’s bow which sat on a foundation of intricately woven  wooden netting filled with all manner of  fish. 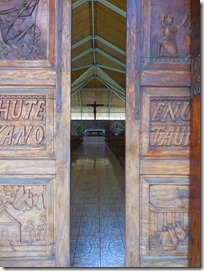 It was an impressive piece of carpentry  as were all the other carvings in the church including the hands that hold the holy water bowls, the huge church doors, the alter and the cross above it. You couldn’t possibly not be impressed.The flowers around the alter were beautiful native blooms which are seen everywhere on these islands, and the singing was even better than the service we went to over in Nuku Hiva. 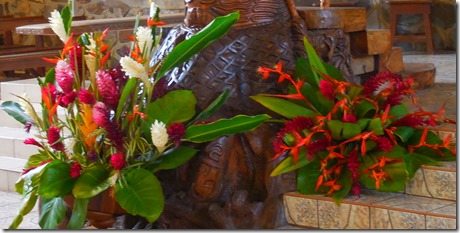 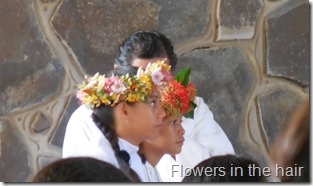 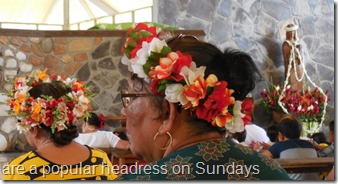 Once mass was finished all the faithful made a bee line to the doors. We soon realised why. Set up on the front lawn were trestle tables selling food. On offer was pizza, chocolate cake, fruit and cream flans, spring rolls, and filled baguettes but the  most popular  queue was for ice cream. Caught up in the hunger rush, we too lined up for an ice-cream, guess it’s never too early for a little indulgence. 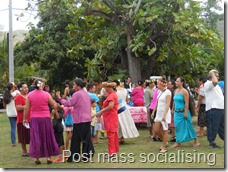 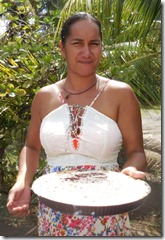 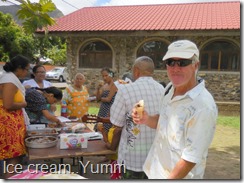 On the walk back to the dock we bumped into a local guy who works on the maintained crew for  the town’s generator. He had been kind enough to help Liam cut up some plywood which was being discarded  which we he needed for the repair to the anchor well. 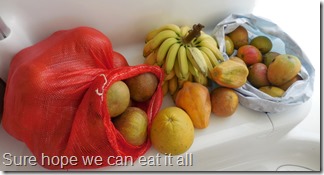 When we arrived back at the dinghy he gave us bags overflowing with fruit. He refused to take any money at all saying with a smile that it was a gift from his family. A few days earlier as we were chatting to a man whose house was across from the church, he out of the blue reached up and with a purpose built pole brought down five mangos, again a gift for no reason at all.

All the people throughout the Marquesas seem to share the same outlook on life. They are not caught up in the rat race that seems to rule the outside world, live happy, comfortable lives and are always polite and gracious.  They are well dressed, take pride in their homes, gardens and cars and are a family oriented culture. So far we’ve not seen a homeless person or any sign of poverty or drunkenness as we have in other island societies.  Everyone is friendly and smiling and always says bonjour to each other and to us, even the school children make the effort. If there was a world model for a perfect society the Marquesans, in our opinion, would win hands down. 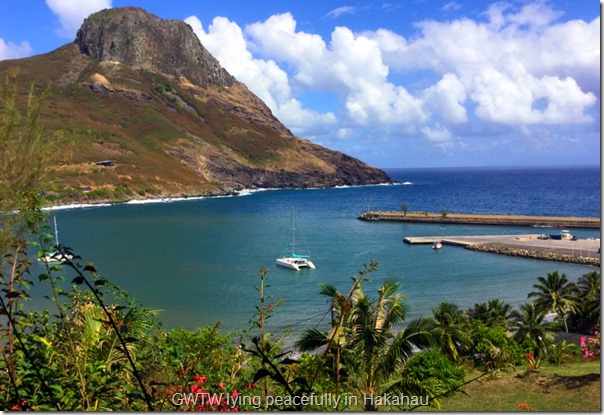