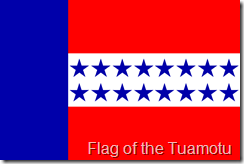 Departing Makemo on dusk through the western pass, the path ahead was thick with a frenzy of hundreds of feeding birds.

It was an amazing sight and one which we could not avoid ploughing straight through the middle of. The birds certainly weren’t too phased about our presence. They parted to let us sail through, then closed the veil and resumed their feeding frenzy with gusto. 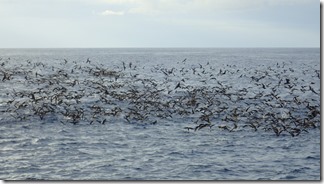 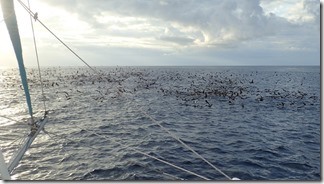 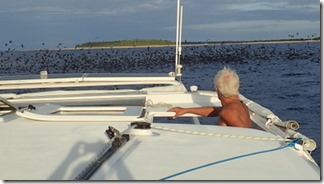 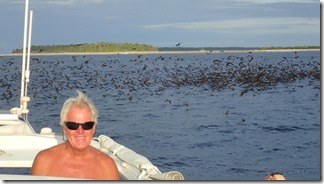 Our next destination was the uninhabited and seldom visited atoll of Tahanea which lay 42 downwind miles further to the west. With a soft evening breeze pushing us along the conditions were shaping up for yet another glorious overnight sail under jib alone. 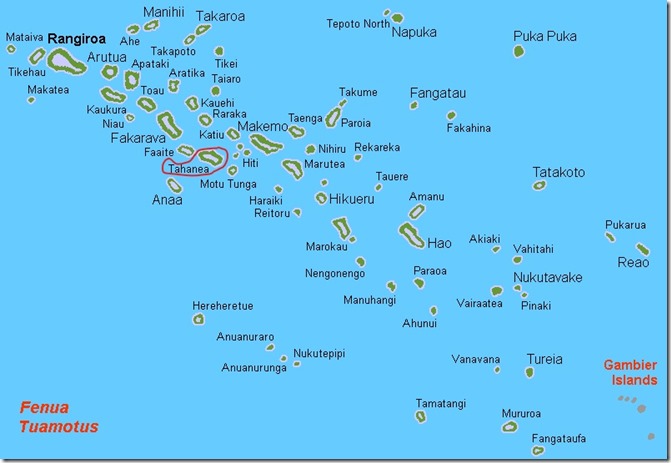 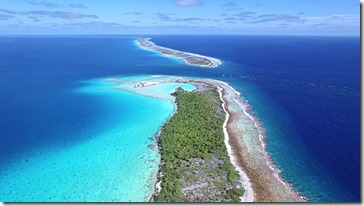 Tahanea has three entrance passes through the reef and we chose the wider middle one, Passé Teavatapu to enter through. We’d heard on the cruisers’ grapevine that this atoll now comes under the banner of a nature preserve.  Rumor has it that a park ranger from the neighbouring atoll of Fakarava  drops by once in a while but we have no real conformation on that subject. 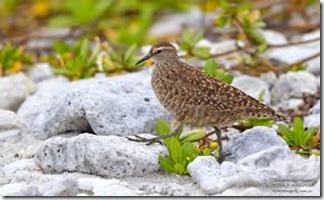 We can only assume that if indeed it is a nature preserve it must be because of the endangered Tuamotus Sandpiper which has set up camp here.

There are less than 100 of these  birds left in existence due to the presence of black rats which inhabit many islands throughout French Polynesia. Sadly we never did lay eyes on these rare little creatures.

What we did see were plenty of fish. The Marquesas chain of islands where we’d spent the past two months is all about what’s above the water, but here in the Tuamotus it’s all about what’s in the water. And believe me there is plenty to see down there. 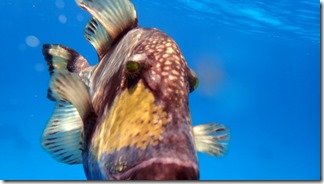 As I’d already tried my hand at a very short dummy run of “pass snorkeling” in Makemo, now it was time for both of us to hit the water and take the watery magic carpet ride courtesy of mother nature.  And what a hoot it was. The trick to mastering this new-found aquatic adventure is to head out in the dinghy through the entrance pass  just as the tide turns and starts flowing back into the lagoon.

As I’ve mentioned in past posts the currents flowing in the passes of the Tuamotu atolls really get up a good clip, usually at a rate of 3 - 6 knots or more, so it’s prudent to catch the incoming tide and not the outgoing one. 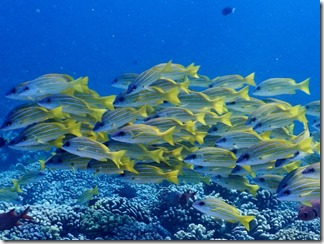 So without further adieu it was time to hit the surf. Having donned wetsuits and snorkel and with the camera in hand we jumped overboard with a long line attached to the dinghy, floating along effortlessly as the current picked up speed. We did this in two of the three passes and you truly felt like you were flying above the sea bed. The fish, sharks, rays, turtles and coral below us whizzed by as we got carried along at an ever increasing pace. 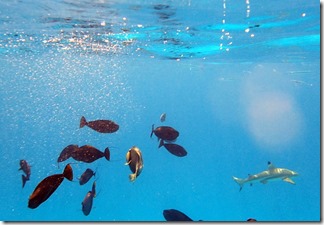 The ride lasted only minutes before we were spat out into the lagoon as the rushing current began to fan out and dissipate. We looked at each other with smiles on our dials, clambered back into the dinghy, revved up the mighty mercury and headed back out for another exhilarating ride.

To coin a well known advertising line the experience was Priceless!

Moving south in the lagoon over the next few days we anchored further down the atoll, tucking in behind the small motu (islets) and changing our location every once in a while. We explored the ocean shoreline with it’s rust colored reefs and tidal pools, and  snorkeled a couple of spectacular coral pinnacles which boasted a myriad of life ranging from itsy bitsy brightly coloured fish to the big guns roaming the bottom some 30 feet below. 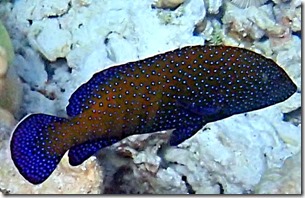 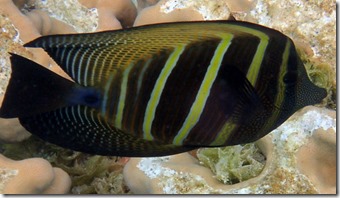 It certainly seemed that we had found paradise here in the Tuamotus but even paradise has its pitfalls. That pitfall came in the form of flying insects!

As was the case in the Galapagos and the Marquesas where I was previously bitten, the nasty yellow wasp has found it’s way to this corner of the world as well.  This time I really copped a beauty. 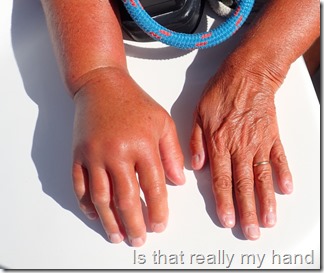 Just as were were about to drop the anchor, whamo, the yellow flyer struck attacking my index finger like a rabid dog. The pain was excruciating. Obviously that put a very sudden stop to dropping the anchor as I retreated to the cockpit with watering eyes and a finger and hand that was swelling up at a rapid rate as the minutes passed. Liam spun the boat around pointing the bows back into deeper water until I regained my composure, which took a bit of time. Eventually the pain began to ease and we picked a sandy spot between the coral and dropped the anchor for the night.

The swelling continued to progress up my arm where it stayed for over a week. No amount of ibuprofen or antihistamines helped and with no villages let alone medical help within cooee, we just had to sit it out and let my body deal with it. An epi pen is definitely now on the top of my medical shopping list. 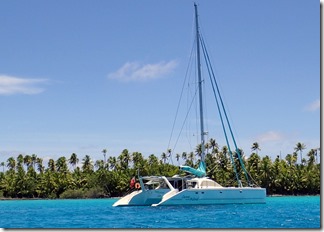 Moving further back up the atoll we stationed ourselves near the northern most pass and did a few more drift snorkels, fascinated by the ever changing array of fish life going about their daily lives below us. We also had our own private aquarium happening at the back of GWTW. Blacktip sharks, parrot fish, rays and snapper hung in the shadow of our hulls looking for handouts.  All of them were totally nonplussed about our presence in the water with them. Can’t say that we felt the same about the sharks though. 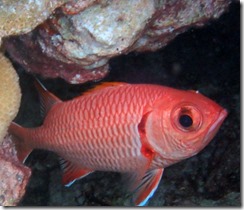 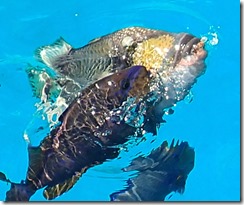 Apart from the wasp incident we really enjoyed our time at this little atoll and we definitely would recommend a stopover here for those following in our wake.

As always when a good weather window rocks around we snap it up and move on. Up next on our list was the famous dive atoll of Fakarava. Everyone who has spent time here raves about the place and we couldn’t wait to get there.