We’ve been anchored here in the bay for just over a week now and have grown to love this little village. 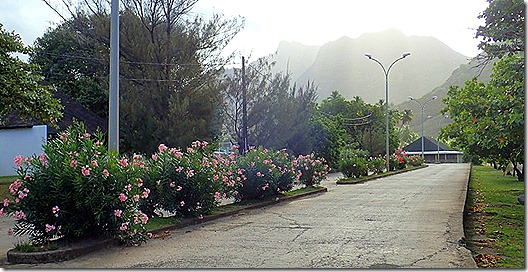 The working day here begins as soon as it starts to get light. That’s around 0430. The hum of the massive generator which powers the island fades into  the background noise as the the sounds of everyday life take over.

Utes and 4x4’s start rolling on the streets, some belong to the fisherman heading for the town dock to ready their boats for a  hard days work at sea, while others drive to the breakwall, set up their rods and cast out over the rocks in search of a dinner-plate sized meal. Children of all ages start arriving at school when the clock hits 0600, most walk but those who live further out arrive by car. With the ringing of the bell at 0630 the playground is deserted and classes commence. 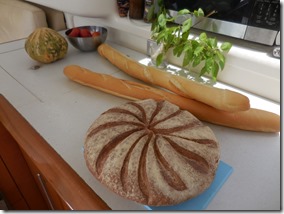 Airport workers  begin their traverse of the switchback road to the west for the nine click drive to where the Twin Otter from Tahiti will touchdown in a few hours time. By 0700 the garbage truck with day-glow vested men hanging off the back rumbles along the tidy streets noisily picking up wheelie bins. The men know that they won’t disturb anyone from their sleep as the village is well and truly up and at e’m .

By 8am the bakery has opened it’s doors. Fresh baguettes and pastries piled high, rest on display tables awaiting their relocation to someone’s else’s kitchen. By nine the baguettes will be gone.

The over 60’s set hit the surf about then. They swim laps of the bay in slow motion creating a trickle of wake as they go.

A bright yellow tractor skirts the waterfront road to the dock warehouse ready to lift heavy bags of cement into the waiting tip trucks for the journey out of town where construction of a paved road is in its infancy. 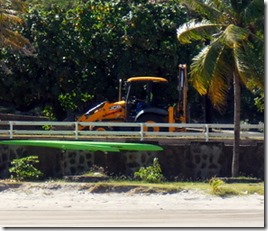 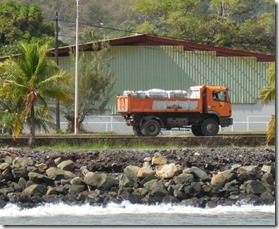 The  village business centre is now pumping as well. The post office, bank and the Air Tahiti office are open and the “off the back of a ute”  Friday veggie market across the road under the shade of the trees has a steady stream of patrons.

In the cool of the afternoon the horsemen and their trusty steads will once again turn the beach into a mini training track as colourful outrigger canoes grace the bay parting the waters as a knife does through butter. 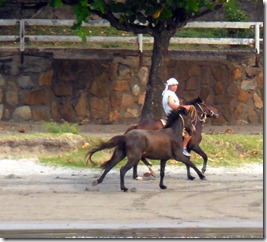 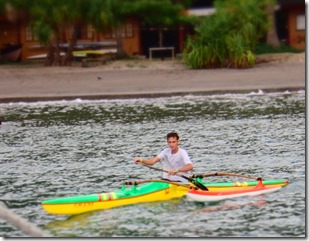 And the backdrop of volcanic spires will slowly turn to pale hues of pink as the sun begins it’s transit to a new day over the horizon. The valley of Hakahau will once again be blanketed in hushed darkness until the crowing of roosters heralds the dawn of a new day.