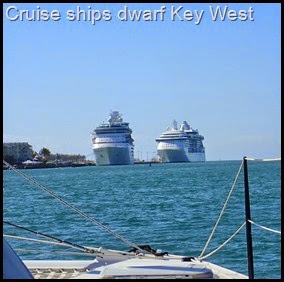 With the wind a steady 15 knots from the NE we left Key West and made our way our into Hawk Channel, motoring the 30 miles to Newfound Harbor Key in rather lumpy conditions. Arriving just before sunset we tucked up into a shallow spot just out of the main channel leading into Big Pine Key. We did have plans to go ashore but the wind had picked up and our 15hp Mercury on the dinghy was not performing as it should, and we didn’t want to risk being stuck ashore if it failed to start for the return trip.  So there was no shore leave for us that night. 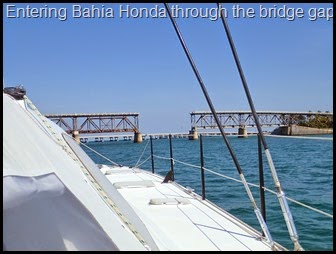 Next morning we tugged our anchor out of  the superglue-like muddy bottom and headed off  to Bahia Honda Key. The Key got a good wrap in our guide and we thought it would make an interesting stop. A section of Flagler's’ now defunked railway line  bridge had been removed allowing for masted vessels to enter the protected small harbour.

Once through the entrance a small beach and part of the Heritage walking trail beckoned us for a little exercise. After making several attempts to get our anchor to hold we decided to call it quits and move on. As a rule we don’t have problems anchoring but no matter what we did it our trusty Bugle just wouldn’t dig in. We figured that the bottom was  just foul ground with no sand or mud to bite into. Luckily Boot Key and the town of Marathon was only 7 miles further on and  we paralleled the bridge of the same name for the entire trip.  Along the way we ‘d heard several boats calling up on the VHF radio asking for a mooring ball in Boot Key Harbor for the night. The response was always the same, no advance reservation could be made by radio or telephone, a personal appearance to the office staff was the only way to put your name on the list. That in itself required a 3 mile dinghy ride from the anchorage! For us there was a 65ft bridge standing between us and those balls so the open roadstead anchorage was about to become home. 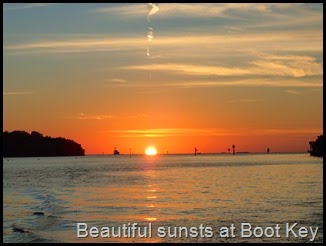 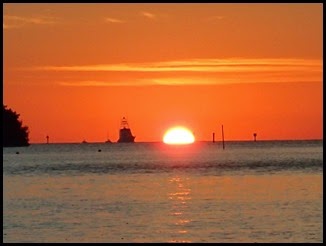 The anchorage wasn’t the best but as the wind was still coming from the NE we had some protection from Key itself. We spent three days here and checked out what was on offer. A dinner here, couple of sundowners there, a zip into Publix supermarket to top up the larder and that kind of summed up our time here.Oh, on the way to Publix we had to dinghy through the mooring field, and seeing how many boats, I’m talking 200 plus, were in the field and in such close proximity to each other we were really glad that option wasn’t on the table for us. 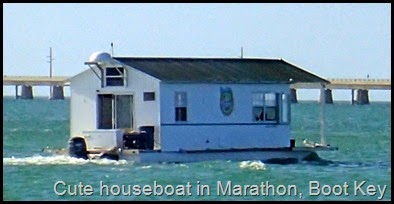 During our stay in the anchorage our ageing 15 hp  dinghy outboard was retired from service after 11 years of faithful work. It had come to the end of it’s life and was replaced by our backup 3 hp Yamaha until we can purchase a new 15, probably in the Bahamas or Panama. The little 3 doesn’t have much grunt but it sure beats rowing. We  had a nice evening out at the Lazy Days waterfront restaurant to watch New England Patriots defeat the Seattle Seahawks on Superbowl Sunday, which was a bit of fun. 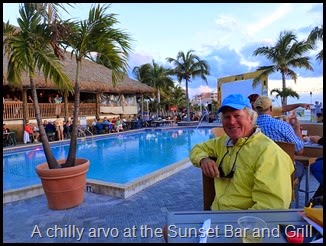 The following day we had earmarked for moving on as the wind was predicted to blow from the south. We awoke to very blustery conditions and the anchorage quickly became untenable with two foot short, steep waves. Without any hesitation the engines were fired up and Liam headed up to the bow to pull up the anchor and get the flock out of there, but one never knows what lies beneath!  Although we can both multitask pretty well we tend to stick to our usual roles when anchoring or as in this case ,pulling it up to leave. I steer and Liam does bow duty. Gusty conditions often make it hard to keep the boat in position as Liam raises the anchor and today was not much different, but I soon realised that all was not going to plan.The helm was not responding, and the starboard engine sounded very off-key. It didn’t take rocket science to realise something was seriously amiss as I shut the struggling  yanmar down, and we cleared the anchorage using the port engine only.

After a mini conference we knew there was a big problem with the starboard propeller and possibly the rudder as well we’d obviously hooked some unknown object while raising the anchor and it had wrapped itself around the prop shaft. So slow progress was the order of the moment. And slow it was. The visibility in the murky, turbulent waters was pretty  much zero, we couldn’t see anything under the boat though we knew for certain something was following us! So we chugged along at a snail pace for a couple of hours in the not so perfect conditions which were way to rough for Liam to venture in to and check out the problem. Eventually the visibility improved and, sure enough, we were towing a dirty big fish trap hanging below the stern, the line securely wrapped around the prop. Stopping the boat l Liam jumped  overboard to cut the fish trap loose. It took only twenty seconds or so and it sank quickly away…job done! Well not quite. GWTW was drifting in the stiff breeze and strong currents and Liam quickly disappeared from view towards the bow as GWTW drifted backwards. A loud call for help and I quickly threw our mainsheet line over the side, Liam scrambled to grip it and then haul himself to the transom, and safety. Its amazing how fast a  bad situation can develop, neither of us really saw this coming though experience clearly came to the fore. 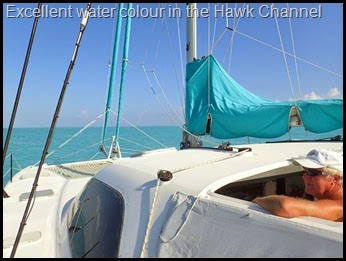 Anyway, we were now good to speed up, albeit still without the starboard engine, and proceeded to make up some lost time to the next anchorage. A mile or so before we dropped anchor Liam again splashed  into the chilly waters and cut loose the firmly entrenched line, still wrapped around the prop and shaft. After settling into the anchorage we discovered the engine had been pulled back by the wrap and  the engine mounts were damaged, very similar to a previous issue with the port engine some months earlier while in Cuba. We could still use the engine,but the- not –so- little job of replacing the mounts would have to be tackled sooner rather than later. 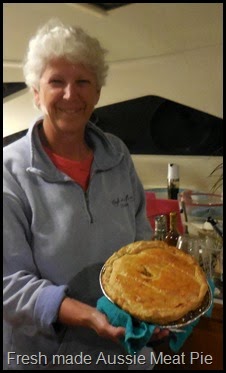 Two days later on route to Elliott Key we called up an Island Packet  yacht named “Holiday” which was sailing behind us. During the conservation Patrick mentioned that his daughter now lived in Australia and was contemplating settling down with her Aussie fella. Within minutes Deb, Patricks’ wife, raised a huge Australian flag up their mast. We were nearly speechless. It was such a nice gesture. We followed them through the narrow Anglefish cut waving goodbye as we veered off toward Elliott Key our last anchorage in the Keys before Miami. One last call on the radio  to our new friends and we promised we’d catch up with them for dinner while we were in Miami.

Email ThisBlogThis!Share to TwitterShare to FacebookShare to Pinterest
Labels: The Florida Keys 2015