A snippet of info. The Florida Keys stretch in a gentle  south westerly curve from Florida City just south of Miami to Key West. Nestled between the Atlantic ocean and the Gulf of Mexico this island chain has become know as America’s Caribbean. 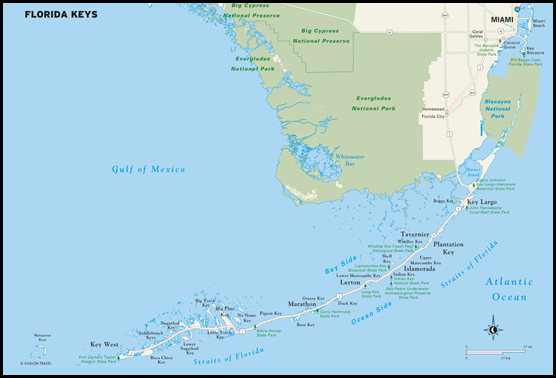 The laidback lifestyle, warm waters and remoteness from the stresses of city life has people flocking in droves no matter what the time of year. From the largest Island, Key Largo, the keys are scattered across 126 miles and are joined by 42 bridges, the most famous of which is the seven mile bridge which featured in the Arnie Schwarzenegger movie, True Lies.

In by-gone days the Keys were only accessible by boat but that all changed when Henry Flagler decided to extend his railway empire south from Miami to the Keys. With Cuba a mere 90 miles from Key west and travel between the two countries unrestricted back then he saw the Key West station as a logical progression for his empire. Trains carried passengers from New york in sleeper cars called the Havana Special  to Key West station where they met up with passenger steamers bound for Cuba. In his late 80’s by the time the project was finished, it had long been his dream to enable the rich to travel by train to the holiday hotspot of Key West. Known as the Overseas Rail Line  it was completed in 1912. Henry Flagler passed away in 1913, 18 months after the completion of the rail line. 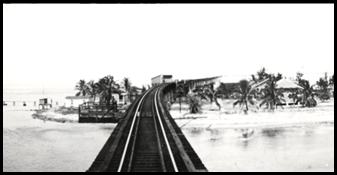 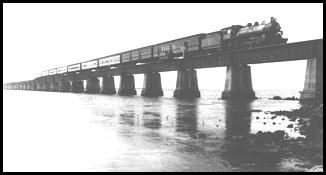 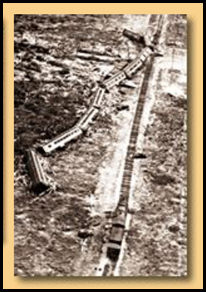 Twenty three years after it’s opening his dream was destroyed by a hurricane in 1935 when 40 miles of the middle section of the line  crossing the keys was washed away. It has never been rebuilt.  As many of the concrete viaducts and steel tressels remained intact the state built the Overseas Highway (US1) over them in 1938. In the 1980’s most of US1 was rebuilt and the viaducts and bridges from Flagler's era  now form parts of the pedestrian pathways of the Overseas Heritage Trail. 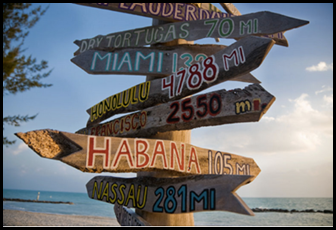 We found the keys a mixed bag  when it came to sailing  and anchorages and really weren’t what we expected. We had heard so many times from so many people “you gotta go to the Keys, it’s great down there”. Well yes, that is probably the case if you like marinas, own a power boat or a yacht that has a mast shorter than 65ft and can take your time sauntering down the ICW.

For us it was a whole different story. Because of our mast height of 73ft off the water, we had to travel along the outside route in the Hawk Channel. Now there is nothing wrong with taking this route, not that we had a choice, however most of the good anchorages which allow you shore access  to shops and restaurants are on the ICW side of the Keys. Hawk channel does have it’s pluses though,  it‘s wide and deep with lovely blue water and  you are not trapped in a channel marker to channel marker situation. It’s also where all the good diving and snorkeling on the offshore reefs are. 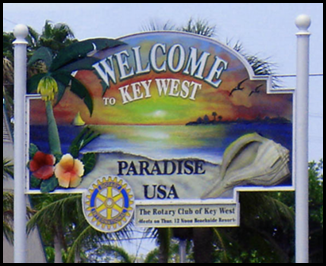 As most of you will know from reading our previous posting our first stop was Key West, the funky little key where the road comes to an abrupt end. If you come by car it’s not on the way to anywhere and it’s a one road in and a one road out town. It boasts that it is the southernmost point in the USA , but when you look on a chart it actually isn’t. But hey, if that’s what the people want to believe who are we to say otherwise. 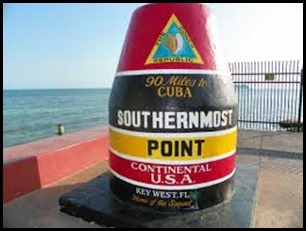 We spent five wild and woolly days in Key West. The wind blew hard and the currents were so swirly in the Fleming Key anchorage that we moved over to the city’s mooring field for a few days. It was a good move. Secure on a ball we could go ashore with piece of mind that no one would play bumper cars with us at the turn of the tide. When the weather permitted, that is wind less than 20 knots, we’d jump in our dinghy for the seriously salty 1.5 ml each way trip to town for a stroll around. 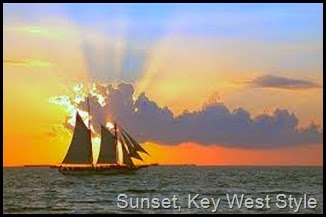 Town was a happening place to say the least. All roads led to Mallory Square which was the centre of the universe for the sunset watching as well as for jugglers, mimics and tee-shirt vendors, while Duval Street was the home of bars, restaurants, cafes,  live music and holiday makers to boot. In fact there are more bartenders in Key West than any other city in the US. You can ask Mr Google if you want to cross check that little piece of trivia. Cruise ships came in nearly every day and  thousands piled off in search of sun, fun, beaches and booze cruises. People watching was a popular café pastime for us and there was no shortage of strange looking bodies around.  The quiet back streets, where the cruise ship patrons don’t go, were lined with beautifully restored homes, many of which were now B&B’s and lush gardens and parks. We even found a really cute coffee shop that had the best lattes and pie that we’d had for what seems like forever. It also had lightning fast Wi-fi. 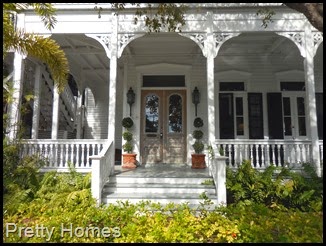 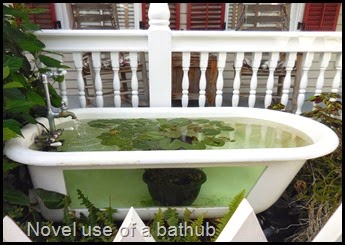 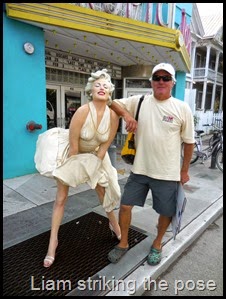 Back where the masses hung out half price happy hour deals were abundant. We ate and drank at a couple of lovely waterfront watering holes and a few disappointing ones, like Jimmy Buffett’s’ Margaritaville and Kelly’s, reportedly owned by Kelly McGillis of Top Gun fame, but no matter where, we always struck up conversations with an interesting mixture of people. Some were escaping the winter woes from their snow ridden northern states while others had a holiday in Key West on their bucket list and they wanted to give that box a tick. 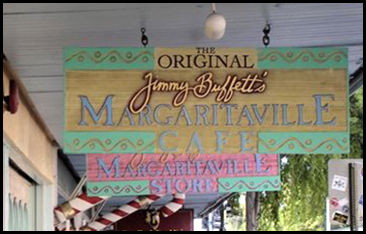 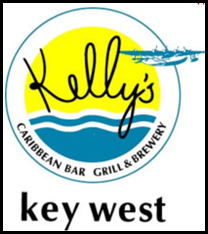 Bicycles and walking were the main mode of transport to get around town, and it didn’t matter which one you took sooner or later you had to dodge all the local roosters, yes the feathered ones, who strut their stuff all over town 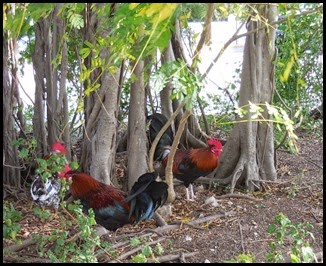 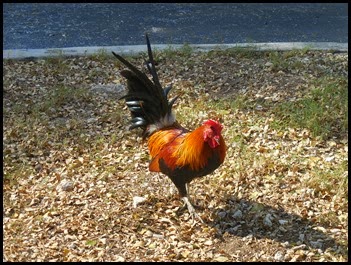 The roosters were originally brought in by  the pioneers and Cuban cockfighters  and have now multiplied to a population of around 3000.That’s a lot of crowers on an island of 2 x 4 miles. Not everyone who lives in Key West are happy about that fact and there are  moves afoot to rid the Key of this quirky attraction. So far the roosters are winning.

Once the weather window came up we took it and headed out to explore more of what was on offer in the keys further north. More of that in the next post.

Email ThisBlogThis!Share to TwitterShare to FacebookShare to Pinterest
Labels: The Florida Keys 2015