Guatemala : All work and a itsy bit of play

With Liam back on board after his trip back to Oz, it was time for the two of us to get back into work mode again.The holidays were over. GWTW was scheduled for her annual haul out and for all of us who call their boats home, we know what that means. It’s always a stressful few hours while our homes are plucked from the water, become airborne and are then marooned on dry land like a fish out of water until the work is done. It’s never an easy time for the boat or the owners. 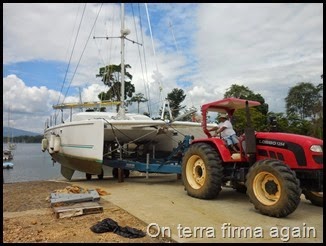 Hauling at the Nana Juana Marina boatyard In the Rio Dulce was a piece of cake. This was the first time since she was launched back in 2004 that we had been pulled out by a tractor and trailer set up rather than the usual travel lift arrangement and, thanks to the expertise of yard manager Jean Claude  and his excellent team of workers, it was a seamless operation. 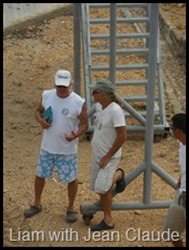 Once out of the water we were backed into our spot on the concrete which would be home for our girl for the next two weeks. Because of the extreme heat and humidity we opted for staying in a small self contained apartment at neighbouring Ram Marina rather than living on the boat without a/c. It was a wise decision. 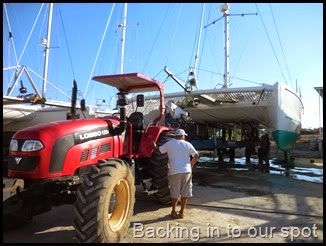 The day after we hauled the heavens opened and stayed open for the next couple of days. That meant that we could only tackle inside jobs and there weren’t that many of them. It was very frustrating to say the least as we watched the rain tumble down and the days slip away. We’d lined up a couple of local guys do some polishing and gel coat repairs but the rain put an abrupt end to their employment with us. When the sun did re appear  Liam and I went hell for leather and got the two coats of antifoul  on each hull slapped on in just one day. Two days later Liam had all the polishing finished and the topsides once again glistened. Launch day loomed and we were told by the yard manager  that another cat had moved into our slip in our absence and that the owners had gone off on some inland touring without telling him. That meant that we would have to stay on the hard and extend our stay in the apartment until they returned. That totally pissed us off as we had been paying for our slip during our time away to ensure that when we returned to the water it would be available for us.

Word on the bush telegraph was that the offending cat owners would not be returning until the following week, so we took the opportunity to do a short inland tour organised by a local travel agent. 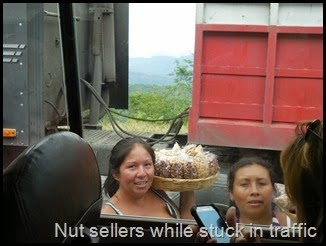 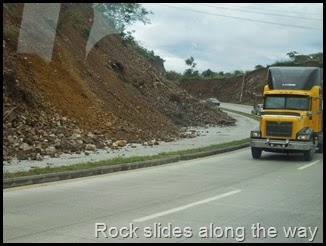 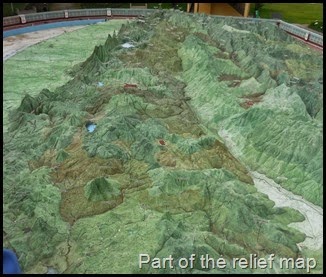 Leaving the Rio bright and early we travelled for six hours on a mini bus, stopping briefly to view a huge cement relief map of Guatemala. What is a relief map I hear you ask, well  you are not alone, we didn’t know either. It’s like a scaled down model of the entire country and you view it from a high platform to get the whole picture.

It was very interesting seeing what the topography of this mountainous land looked like. From there we continued west passing through the capital, Guatemala City, and out the other side. Owing to the heavy weekend traffic it was pretty slow going to the point where the excursion to some Mayan ruins got shoved under the carpet and the tour guide moved down the script to the lunch venue, trouble was it was now 5pm and drizzly and very cold. The restaurant was warm and cosy and we were all pretty ravenous, but the open fire with no vent made for us all smelling a little like smokey the bear. 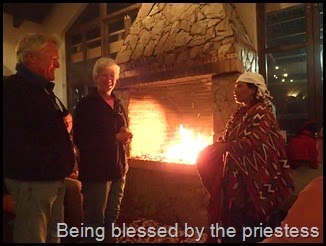 The Mayan blessing ceremony which was to take place outdoors was moved indoors, much to everyone’s relief. By the time we got to our hotel Finca la Loma up in the hills near Chimaltenango it was close to 10pm. We really felt for those in our group who had bought the accommodation and meal package, as once we got there they were told that the kitchen was closed and there would only be sandwiches and coffee on offer. To top it all off the hotel was one of those “Eco friendly” hotels where the systems run on solar energy. That’s great, say in Florida or the Caribbean where there is plenty of sun, but the Guatemalan highlands, emphasis on the word high, not such a great idea, (read rain, fog and clouds) equals low lighting, no heating and the big thing, no hot water on on the cloudy rainy days!!! Nothing quite beats the exhilaration of stepping under a freezing cold low pressure shower after nearly 14 hours of travelling. Brrrr! 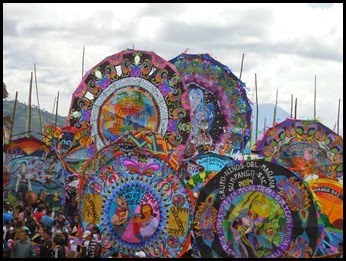 Day two of our trip had us lining up for the main event, the festival of the giant kites held on All Saints Day in the town of Sumpango. It is a huge event that has been celebrated for centuries throughout Guatemala in memory of loved ones who have passed away. The kites come in all shapes and sizes and are beautifully decorated. Multicoloured, they are raised to the heavens at around  4pm, some make it, some never get off the ground and some that do get airborne have a short life before they come crashing back down. 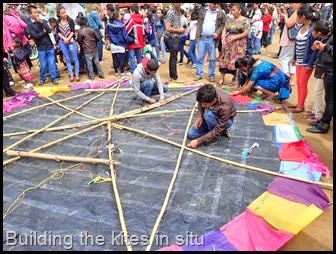 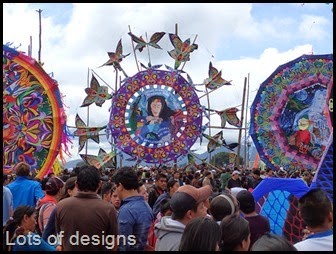 Held usually on a football field close by a cemetery, families arrive early for a graveside picnic lunch and then move over to the field to watch the giant kites take to the sky. It is quite the spectacle. With food stalls, live music and viewing stands set up the whole scene has a carnival type atmosphere. Sadly we had to leave for the return trip to the Rio before the really big ones went up. 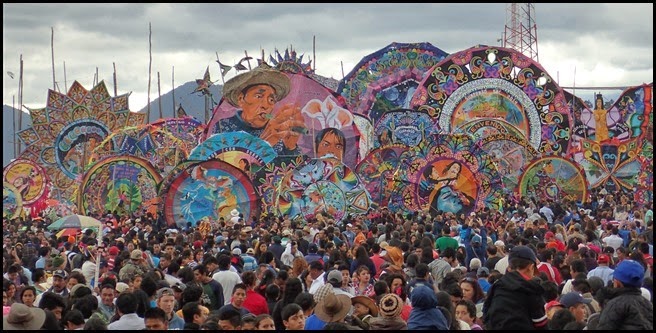 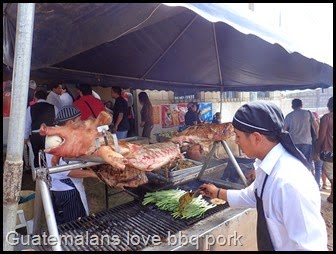 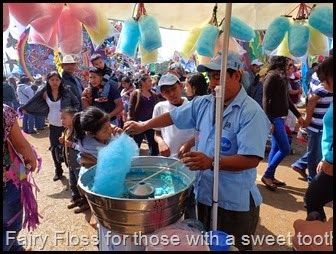 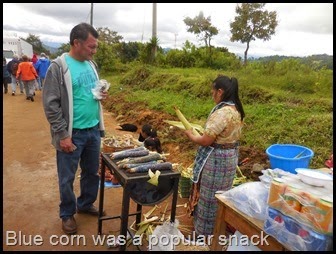 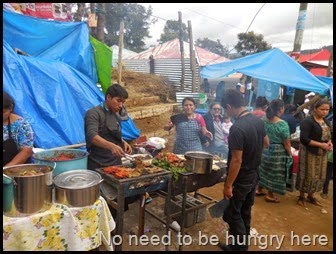 After our two days away, we were all set to dunk GWTW back into the water. Our slip was vacated and back in we went without any dramas.  It was good to be back on board and floating. 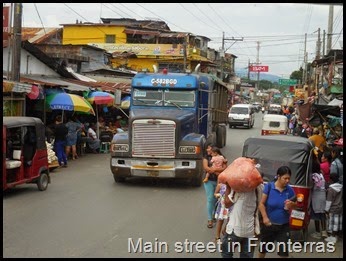 A couple of days later we took off to see the  Mayan ruins at the world heritage site of Tikal. In company with  English friends Gill and Mike from s/v Romano we set out mid morning on Saturday for the trip. The problem with travelling over a weekend is that the bus services to our destination were quite limited and you couldn’t pre book a seat. 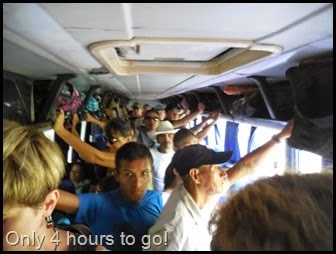 The comfortable express buses don’t travel this route on Saturdays  only the “all stops”, less road worthy service publicos. That means that it’s first in best dressed once the bus arrives. The Guatemalans may be short in stature but what they lack in the height department they make up with speed, they sure know how to rush a bus.  By the time we boarded it was standing room only with not a hint of personal space anywhere to be seen.

Feeling more like cattle than passengers and just when we figured the bus was bulging at the seams and way past the legal limit for seated and standing, if there is such a thing in Guatemala, more people pushed their way on. Now we have travelled on many public buses over our years of cruising including in Indonesia, Sudan and Egypt but this was a real eye opener. And as crowded as it was, the experience was nothing short of entertaining. 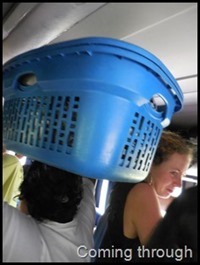 There is definitely no concept in the Guatemalan culture of giving up your seat for the elderly, infirm or mothers with babies. Teenagers, grown men and the bus driver all turn a blind eye. At one stage we stopped along the roadside and a very large women with an extremely large basket on her head boarded.

She pushed her way past those sardined on the buses front steps and that was no mean feat, until she reached the second row of seats where she preceded to set up shop and sell her fish and chicken frittatas. Now these weren’t preassembled  meals this lady made them to order right there on the speeding bus. That took talent! Luckily she was a good shot with all the sauce combinations or else the surrounding passengers, including yours truly, would have been wearing it all over our clothes. 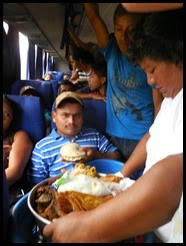 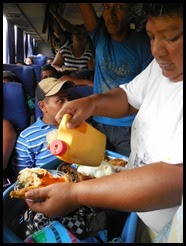 Orders were shouted from the back of the bus, money was passed forward hand over hand and the food passed back by the same method. Even the bus driver indulged in one of her delicacies between texting on his phone and driving. It gave a whole new meaning to road service. 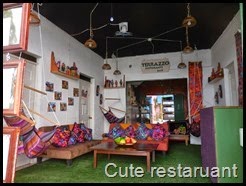 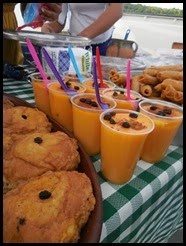 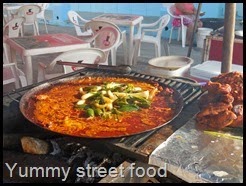 Arriving at Flores a little worse for wear, we spent a couple of hours looking around the cute little island town before taking a taxi, at least we got a seat, another 30 klms to the French run hotel Mon Ami on the edge of Lake Petén. The hotel came highly recommended by the French contingent at our marina and we weren’t disappointed. 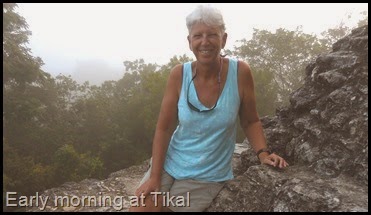 Sunday morning we were picked up at 0330 for the drive out to the Tikal ruins. The haunting cries of the howler monkeys greeted us as we made our way by flashlight across the jungle floor and to the top of the grand temple. At 210 ft above the surrounding canopy  we sat patiently waiting for the sun to rise. It was eerie but awesome as watched the sky slowly lighten, the sounds of waking animals music to our ears.  Waves of mist floated by giving glimpses of other temples across the valley. It was truly spectacular and worth getting up so early to see. Over the next four hours our guide walked us through the other temples and ruins explaining their importance  in the ancient Mayan civilization. By 11am we were all  templed out and returned to the hotel for some afternoon well deserved R&R. 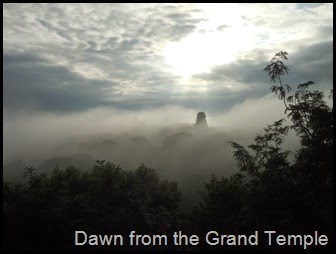 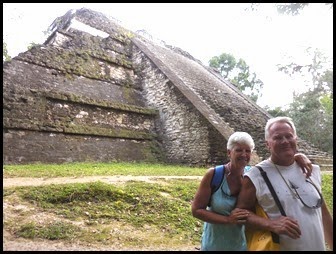 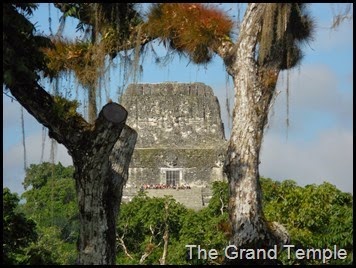 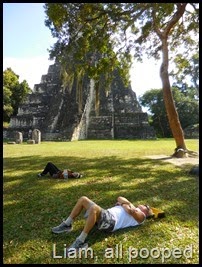 Monday we lunched at a great roof top restaurant in Flores before boarding what we thought, and had paid for, the luxury non-stop bus back to the Rio. But no, we had been duped by the bus agent and wound up back on the salubrious bus that we travelled on two days earlier. Oh well, you win some you lose some. At least this time we got a seat! 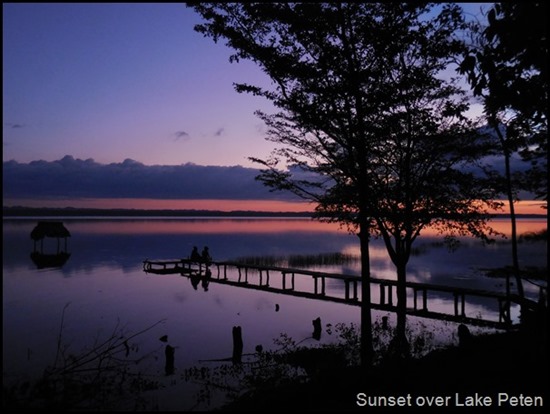