Miami is a vibrant, prosperous, city whose beautiful people party till the wee small hours of every day. But along with the rich, the famous and the surgically enhanced there is also a not so pretty side. Beggars walk the lanes at nearly every set of traffic lights. They stroll between  Porches, Audi's and Merc's  with soulful faces looking for handouts. Down and outs sleep in city parks overlooked by million dollar homes and condos, their  few worldly possessions bundled into shopping carts.

Swanky marinas bursting at the seams with floating gin palaces are a stark contrast to the many derelict boats which lay half sunk in the anchorages just outside, silent reminders of failed dreams. Crime and shootings take place every day and although we have not experienced any of this we see it reported nightly on the TV newscasts. All that glistens in the Magic City is not gold. 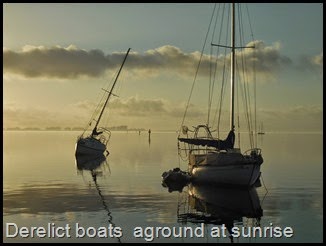 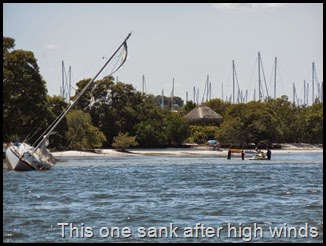 Arriving here had been a long time coming and after what seemed an eternity, given that we left Guatemala on Dec 30th and it was now February , we settled into the anchorage outside Dinner Key Marina.We were greeted with a warm welcome from our good friends Judy and Donnie whose friendship with us started four years ago when we first met while on the hook outside their holiday house in Deltaville, Virginia. 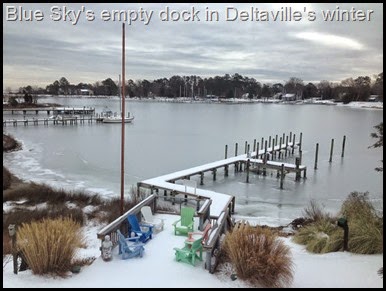 They keep their beautiful yacht “Blue Sky” down here down during the winter and we knew that we’d be sharing lots of laughs and fun times with them during our stay. The anchorage was within walking distance of trendy Coconut Grove which is packed full of great restaurants, funky bars and excellent supermarkets.

After getting set up online our first job was to start ordering dozens of essential spares we’d need for crossing the Pacific later this year and believe me there is no better place to do  your shopping than here in the USA.  Our credit cards took a beating as we ordered our little hearts out. Two hot water tanks,one for each side of the boat, a new life raft,(our old one was going to cost more to service than  to buy a brand spanker), a variety of pumps, impellers and filters, made their way onto the seemingly endless list as did an Epson wireless printer. 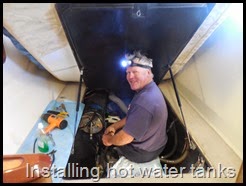 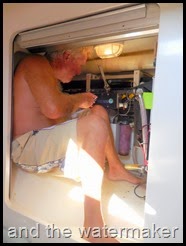 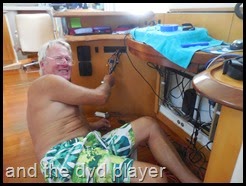 Annie joined the Apple family and became the proud mother to her first iPad  while Liam got a replacement one, gratis, when his decided to malfunction, thank you very much Mr Apple. Two dvd/cd units, generator spares, engine spares, additional cockpit awnings, a backup chart plotter, new lifejackets, tins of antifouling paint, watermaker spares and control board and a matching pair of trampolines( the catamaran type not the gymnastic ones) as well as a bunch of other stuff just way too numerous to mention also found their way winging it in from various places around the US. 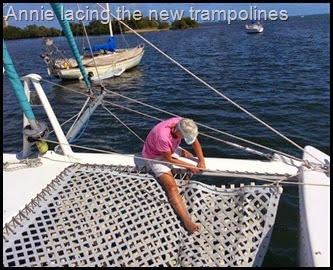 We were sure that we’d  become a household name for the boys from Fed Ex, DHL, UPS and the US postal service. It was just like Christmas every time a box arrived.  Oh and in the middle of all this our credit cards “compromised” and we had a lot of fun and games getting replacement ones sent over from Australia.

Foolishly we had figured that we’d be in and out of Miami in just a few weeks. We had somehow forgotten that everything to do with the lifestyle that we lead takes longer than expected, and then of course there is that other thing that always reeks havoc with our plans ..the weather. With mother nature taking control, she singlehandedly choked much of the US in a blanket of snow thus giving us lots of playtime while waiting for our overdue packages. Rather than sitting and twiddling our thumbs we made the most of it.

The Miami International Boat Show kept us busy for a couple of days. Bigger than Ben Hur it covered three venues, two “in water” displays and the third at the sprawling convention centre. There was an absolute myriad of ways to spend your money if you were so inclined. It was a good thing that we’d already spent all of ours. 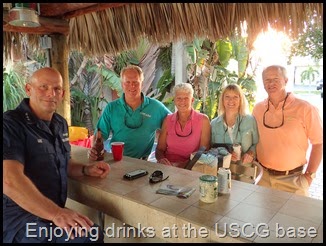 After our second visit out at the show we, along with Judy and Donny, were invited as guests for sundowners at USCG base by their friend and neighbour  Admiral  Dean Lee who’d flown down from fleet HQ in Norfolk Virginia. We’d met the Dean on a few previous occasions and he is a ton of fun. As the sun set over Miami we had a great time enjoying the the hospitality of the base, meeting a few of the officers and being given a private tour of some of the fast response vessels. Now that’s something you don’t get to do every day. 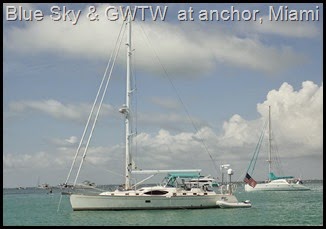 Over the next two months, yes we have been here that long, we’ve ben  alternating anchorages between Dinner Key and the much more salubrious other side of Biscayne Bay, Nixon’s beach, named after the president who once had a home here at the water’s edge. The water on the eastern side much cleaner and clearer and the views  are way better than looking at derelict boats and sometimes their dodgy owners.

With a drying sandbar at the southern end, this part of the bay becomes a bit of a zoo on the weekends when nearly all of Miami’s boating community come over to party, play very loud music and chill out on the foredecks of their boats away from the blaring speakers in their cockpits!. Having heard the same music adnauseum we are starting to know the songs, even though they are in Spanish. 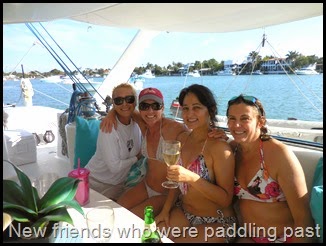 Being the only boat sporting an Aussie flag a few friendly’s have stopped by to say hello including some paddle boarders one Sunday arvo.And speaking of paddle boarding yours truly had a go at it with mixed results.It only took a few seconds from go to woe! 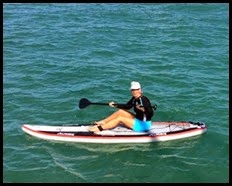 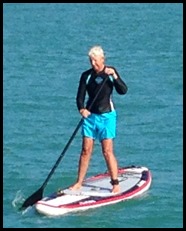 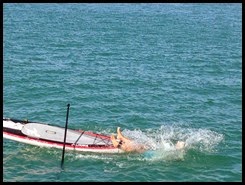 While we’ve been applying for residency here in Miami, (joke), Liam clocked up another birthday and we had a lovely dinner with friends up in Coconut Grove…he might not feel it but he still looks as young as a pup to me. 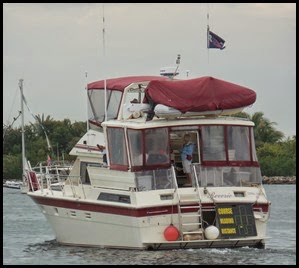 While we have been here we’ve met some truly wonderful friendly people and others who have the moral values of a street rat. It was one of the later who steered his 50 ft powerboat into GWTW while we lay at anchor, later claiming that it was us who were in the wrong. Minutes after the collision and with total disregard to the damage he’d caused  and nerry so much as a word of apology he reversed his vessel away, merrily chugging off down the channel as though nothing had happened. We were left standing gob smacked on our foredeck. It was a sickening feeling. The vessel piloted by the owner along with the five persons aboard were acting as the race committee vessel and officials for a sailing regatta being hosted by the exclusive Coral Reef Yacht Club.They were motoring out to the racing area when the incident happened, but were clearly not into situational awareness!. Unfortunately for the owner two independent eye witness saw the entire incident and came forth offering their help in relation to any insurance claim that we might make. 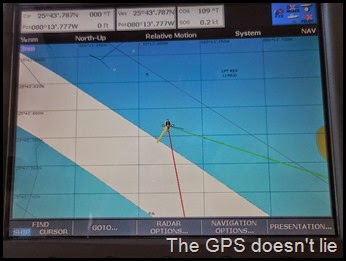 A phone call to the water police and the subsequent interviewing of both parties that afternoon along with the police report proved that we were indeed not at fault, A fact that was blatantly obvious having been at anchor in an anchorage and not in any way obstructing the channel leading out to the bay. The owner of the vessel was charged  by the police, which would have done nothing for his blood pressure,and we then in due course took up the matter with his insurance company. After many phone calls and emails to his insurance company and being told that he was challenging  the police report  to have it changed to favour him, justice and common sense prevailed. We were happy to hear  just a couple of days ago that a cheque covering the repairs and associated dockage costs is being forwarded to us. 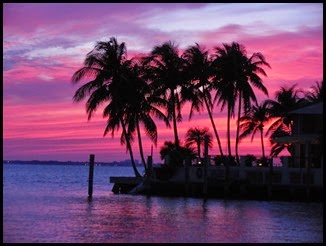 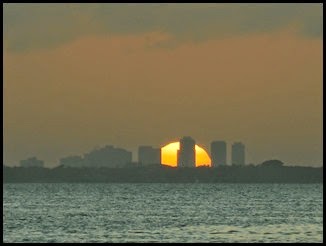 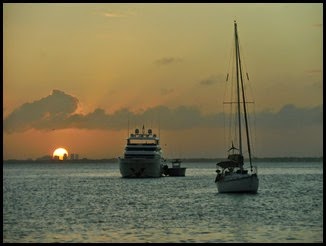 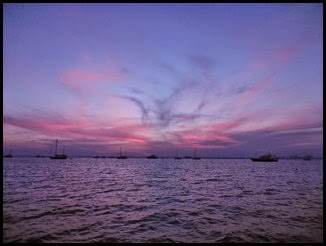 So far we’ve had a pretty good time here. Fabulous sunsets bring most days to a close and apart from a few rather chilly days the weather has been great. The water is a nice temperature for swimming and we’ve shared good times with friends old and new friends. 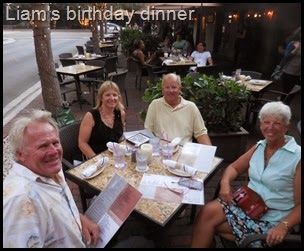 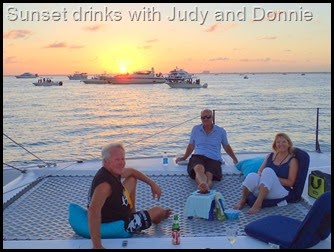 It’s now April and today Liam is battling with the computer board he’s just installed on our watermaker, and the computer is winning. So we might be here hanging here a little bit longer but we will keep you posted on that one.