Cruising time at last:Northbound to the USA 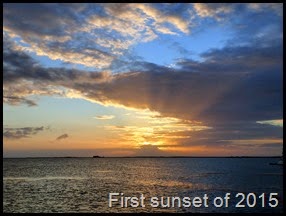 As we had stopped at many anchorages in Belize and Mexico when we were southbound in May 2014 we saw no need to dawdle this time. New years Eve had us anchored in Placencia Belize. The rain poured down and the wind howled and although there were about a dozen cruising boats in the anchorage, no one left their boats that night. It was a pretty dull start to 2015 to say the least.

Strong winds and big seas stopped us going any further for about a week. Still if you have to get stuck somewhere for a while Placencia  was a nice place to be. There are some good restaurants a free dinghy dock and plenty of  wi-fi and grocery stores. It also gave us the chance to catch up with Mat and Renee from Outlandish and Mat and Karen from Where 11, both boats that we had known down in the Rio. The winds brought a bit of havoc when a charter cat dragged anchor down onto a cruising boat. The charters had no clue as to what to do,so Liam jumped in the dinghy to help them out and give them a few tips.They proceeded to the dock for the night and the rest of us got a peaceful night’s sleep! 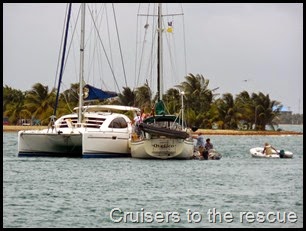 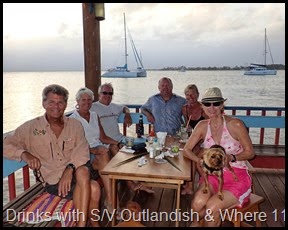 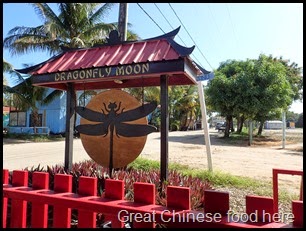 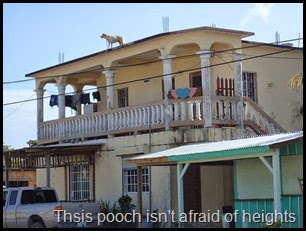 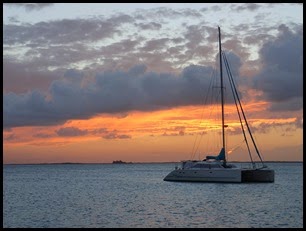 Eventually we were able to move on, stopping for a couple of nights along the Belize and  Mexican coast arriving in Isla Murjeras just before the next big front came through.

The new Vesper AIS system that we installed back in the Rio was worth it’s wait in gold as we headed up the Mexican coast.We have it overlaid on both our nav computer running Open CPN and our Raymarine chart plotter and it connects via bluetooth to our Ipad as well. 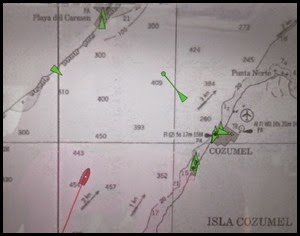 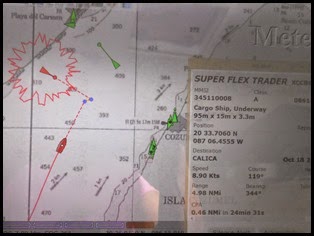 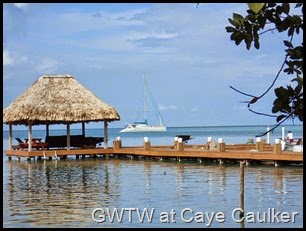 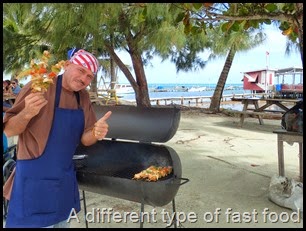 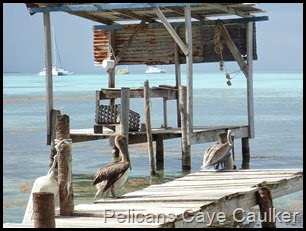 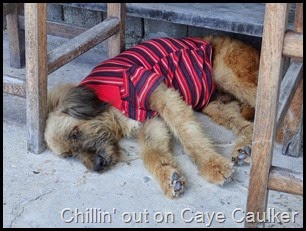 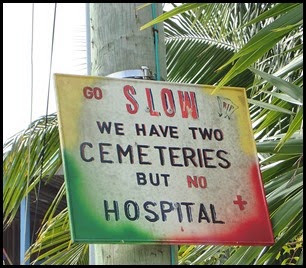 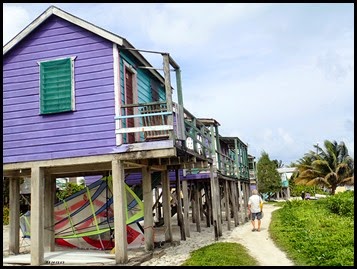 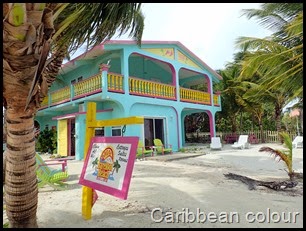 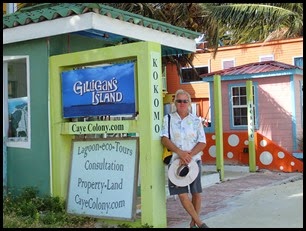 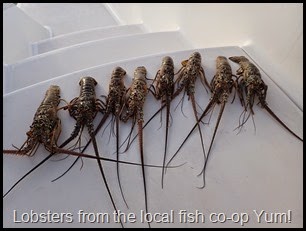 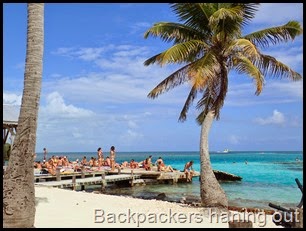 After four days of sitting out some heavy winds the gate opened and we headed out into the Yucatan channel bound for Key west Florida. An hour out we abandoned the idea due to the rough seas and returned to the anchorage for the night. We figured that in another 12 hours the seas would have calmed down even more. It was a good decision to turn back. At first light we tried again. We had lost one day of our 3 day window but if we didn’t go now well who knows when we’d get another chance as the northerly fronts were coming off the Florida coast thick and fast. And one thing was for sure ,we didn’t want to be out there bashing into strong winds and seas kicked up by the gulf stream as that is a sure fire recipe for disaster. 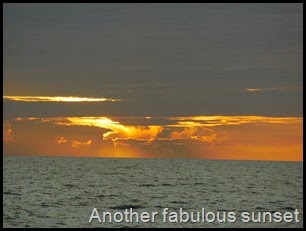 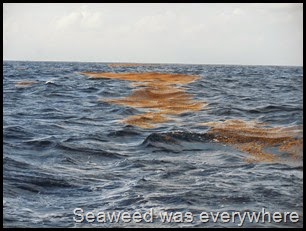 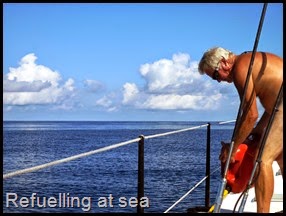 The passage to Key West was 350 miles and we knew that the strong gulf stream current which flows north would be our friend along the way and it was giving us a boost of 3-4 knots in boat speed a lot of the time. That said we still needed to be tucked up on the anchor by midday in 2 days time to avoid being smacked by the next scheduled northerly front . Motor sailing most of the way in flat calm seas it was a good thing that we had topped up our fuel tanks and jerry cans in Isla Murjerus before leaving. 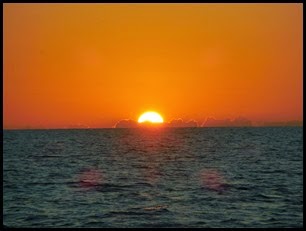 After the first night at sea we calculated that we would  be arriving into Key West in the dark, something we didn’t want to do in a port that we hadn’t entered before. So as much as it is against our grain we slowed our speed down to snails pace so that we would arrive with the early morning light. It was a plan that worked well ,entering the Key West channel just before sunrise. Right on cue just after midday the next freight train from the north arrived and we very glad we were snug as a bug in a rug on the anchor. 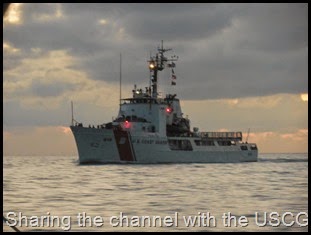 From Guatemala to Key West we covered a distance of just over 800 miles. Realistically it should have only taken us one week including a couple of stops along the way but due to the terrible weather conditions it took us a few days shy of one month. We were finally  back in the USA and glad to be here.

Formalities Checking In. Customs and Boarder Protection(CBP) are located at Key West International Airport in a pink building on the right hand side as you enter from the main road. If you are a foreign flagged vessel and do not already have a valid US cruising permit issued from another mainland port or US territory call the Central Florida CPB  phone number 1800 432 1216 or 1800 451 0393 once you are anchored to report your arrival from a foreign country. 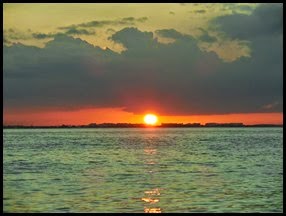 They will  then give you a permit number and advise you that you have 24hrs to report to the Key West office face to face. Bring  with you your clearance papers from your previous port, passports  and your boat registration papers. Agriculture will want your trash ie meat products that are not frozen and fruit and veg so take them with you as they will make you come back in if you don’t!!!!. It will cost $18 one way in a cab from town to the airport or you can take the local bus (sorry no info on the bus).  You will be issued a cruising permit valid for 1 year and that will cost you $19.

BIG IMPORTANT NOTE ON VISAS FOR NON US CITIZENS.

You CANNOT enter the USA on an ESTA visa via a private vessel. You can ONLY enter with this type of visa via a commercial carrier ie airplane or ferry. If you are in the BVI’s and have a ESTA visa take the ferry to St John or St Thomas in the USVI’s check in with CPB, take the ferry back to the BVI’s and THEN sail your vessel into US waters. This also applies to guests visiting you if you plan to take them to the USVI’s Porto Rico or mainland USA. If you have already activated your Esta and they have not then they must take the ferry , you sail your vessel over and pick them up in the USVI’s once they have checked in.

You CAN however enter via private vessel if you have a B1/B2 visa which you obtain from a US embassy outside of the USA. We got our B1/B2 visa at the embassy in Barbados and bought the 1 year +5 year extension. All B1/B2 visas are valid for a 6 month continual stay in the US. Once you leave the US to go cruising to a non contiguous country the clock on your visa starts again from the date you re-enter the USA .

Email ThisBlogThis!Share to TwitterShare to FacebookShare to Pinterest
Labels: Northbound to the USA 2015