Close Encounters with Tigers and Bulls

The island of Beqa is roughly twelve miles south of Viti Levu, the main island of Fiji. This lush and mountainous island is almost circular  in shape and it’s large lagoon is surrounded by thirty kilometers of reef.

There are two attractions which brought us here.  Beqa is a diver’s mecca and the Fire Walkers here are said to be the best in Fiji.

We dropped the hook just off the Beqa Lagoon Resort as both Liam and the Rewa crew were pretty keen to  get wet and mingle with those who live in the underwater world.
As luck would have it, that evening the resort was putting on a buffet dinner complete with a Fire Walking display with the walkers coming from the nearby village of Rookwa. Of course all the yachts anchored in the bay signed up. Along with the resort guests there was probably around fifty people in attendance.

Just to prove a point that the rocks were indeed hot, hot, hot, water was poured onto one of the rocks and it instantly turned  from liquid to steam.


Below are a few happy snaps from the show.This is one circus act that you definitely do not want to try at home.

The show lasted about 30 minutes with the walkers dressed in grass skirts hanging down to their ankles. Personally we didn't think that was such a good idea given they would be trotting across red hot rocks. The fire had been stoked for a couple of hours and the embers were still glowing as the show started. There is quite a legend attached to the Fire Walkers of Beqa which, if interested, you can find  the story on the internet googling Rookwa Village Firewalking, “The story of fire walking in Fiji”. 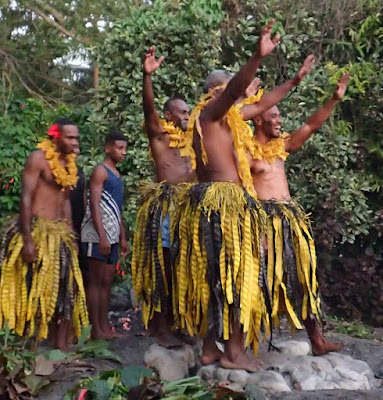 Now onto the other main event.

In this world there are nurses, lemons tigers and bulls both on land and in the water and it’s the underwater ones that are of interest here.

As Liam is the more experienced diver in our family he can relay his story to you fist hand.
I have dived with lots of sharks during our years of cruising, though  they have mainly been reef sharks and generally not overly large. Mind you there was a  Great Hammerhead who happened along during a pass dive in Fakarava Tuomotus a few years back and that was pretty awesome. However, reef sharks can be aggressive and a 6 or 7 footer with attitude is a serious menace. Especially when you are spear fishing and have nailed a thrashing, bleeding fish. That gets their attention real fast.

This shark encounter was far more orchestrated. It wasn’t a cheap exercise  by any means but the value for money aspect was priceless.  Included in the cost, US$180 pp, were two dives, a light snack between dives and all your gear if need be. However in the interest of everyone’s safety you could not use your own regulator or tank. It was mandatory to use theirs.

Once the extremely comprehensive briefing was finished we all piled into the resort’s dive boat and off we sped across the lagoon to an area called The Cathedral. 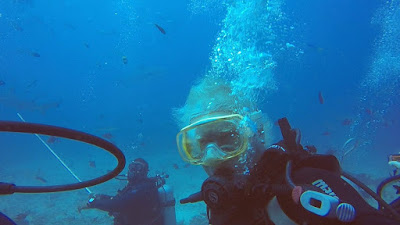 Around a dozen or so divers dropped down fast to around 60 feet and lined up behind a man-made wall which was some 2 feet high with Go Pro’s at the ready.

We all knelt and just in front of us was a metal trunk full of large chunks of fish.

This was manned by two of our dive guides, one who would feed the sharks, the other armed with a lengthy pole to ward off any overly keen creatures. I’m sure you get my drift here. Behind us stood three more guides similarly armed. They certainly gave us an element of comfort.

It was hard to tell exactly but my best guess would be there were around 30-40 sharks cruising around us, and I mean close, like often less than 10 feet both in front and above us. It felt like we were in a huge aquarium but this time there were no glass walls separating humans from predators.

The gang was all there….bulls, nurses, lemons, reefs and the big kahuna of them all…tigers!

The diver in charge of feeding would take a chunk of fish from the bin, about twice the size of a loaf of bread, and the big male tiger, around 15 feet long, would cruise slowly by and have the fish chunk almost placed into it’s gaping mouth. Meanwhile the bulls and other sharks continuously circled our group. It was a beyond cool experience, believe me.


At times the big tiger was so close as he passed by we could have easily tickled his tummy. The bulls were just plain uber menacing in appearance. They spooked us all. Man they are nasty looking fish, their vibe felt as though they would really enjoy eating us if the guides were not there to keep them at bay. 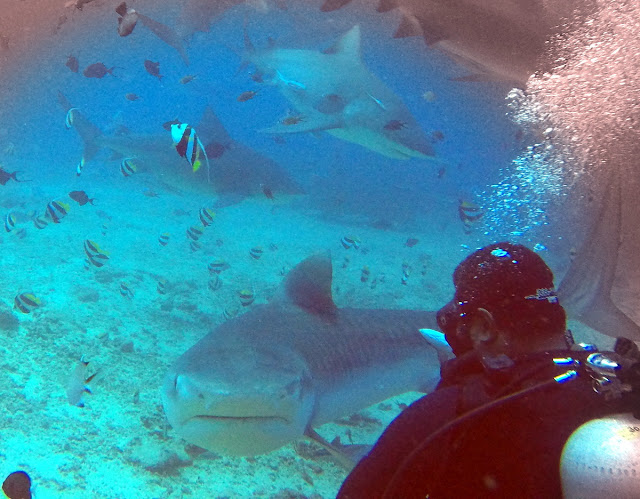 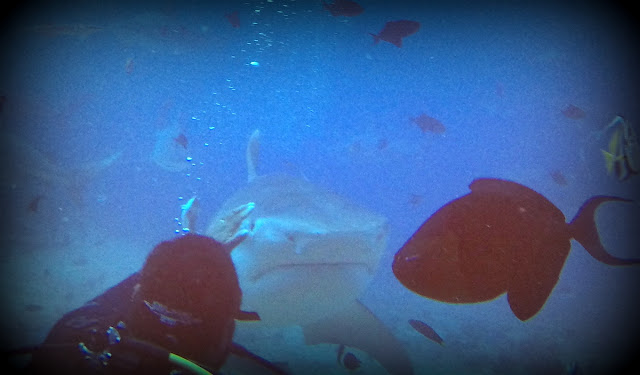 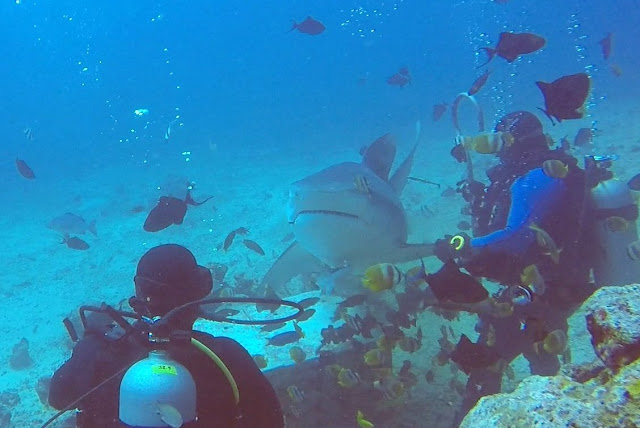 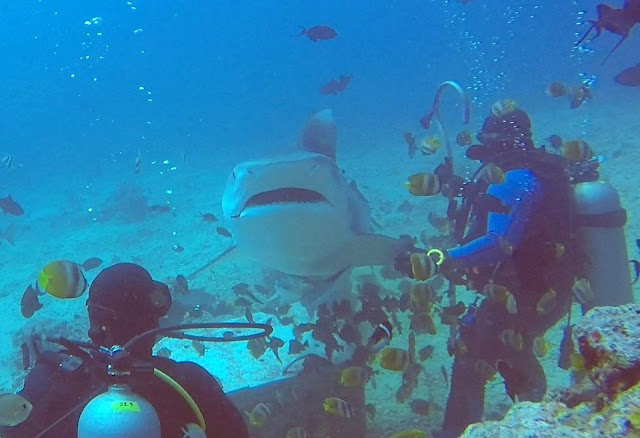 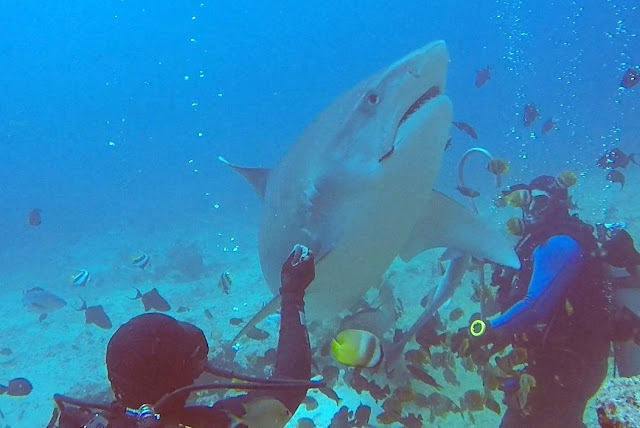 Many times our minders would poke a passing shark, and I'm talking a hefty jab in the side that rippled the shark’s flank.

Once the tigers had had their fill our food handler took the last chunk of fish and swim quickly away from our group tossing it up for a free for all . It was a take no prisoners moment between the sharks and all the fish. Winner took it all with that last chunk and there was no backing down from those fast bulls.  With the dive and  shark interaction now over we shark struck divers slowly ascended back to the surface all the time under the watchful eyes of our guides.

What a fabulous morning it was indeed. The Tigers were  definitely the stars

So, if you are into spending a bit of quality underwater time with some of natures finest and most feared sharks, Beqa is definitely the place for you.