Our 120 mile sail to Moalo was uneventful. We were in loose company with two other boats but caught up with Rewa just before entering the tricky pass on the western side. Navionics, one of the navigation programs that we use was absolutely hopeless.  It’s a very good thing that we also use google maps overlaid on Open CPN, as well as a Chinese version called Ovitalmap which is just like google earth but uses different satellites for its geographical photography.


Arriving mid afternoon we had good light to enter the rather hairy S-shaped pass through the reef. Once inside we motored into the anchorage just off the  village. As the tide was at dead low we were not able to go in and do our Sevusevu as there was no way we could get the dinghy to the shore. We hoped the villagers realized that. 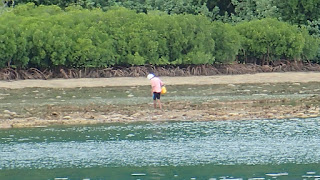 Later that evening around 8pm we had a knock on the hull, it was the police. The officer had been called to alert him that there were two yachts anchored in the bay and he’d driven from the other side of the island to check our papers were all in order, and to remind us to visit the village chief and present our Savusavu at 8am the following morning. The bush telegraph is alive and well in Fiji.

Next morning we did our duty and in we went. The tide was high so we made it to the seawall without a problem.

The village appeared less orderly than our visit to Susui. The buildings were not as neat and tidy and the yards rather unkempt  but the people were as friendly as ever.

We met the chief after waiting over an hour. He was very old and frail and was still in bed so his daughter took us through the sevusevu ceremony. We had a quick walk through the village just to be polite and then the rain came down so we hightailed back home. 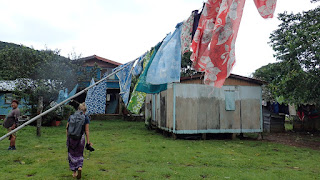 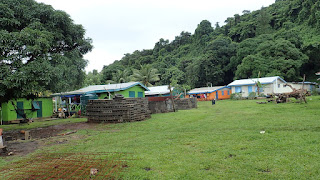 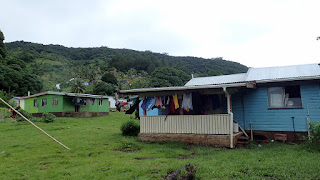 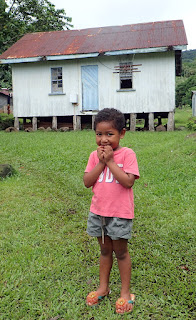 We left the anchorage that afternoon for another overnight passage this time to Kadavu, some 78 miles further west.

Along the way we passed many Chinese fishing trawlers as well as longline trawlers that, lucky for us, had flashing lights on the ends of there lines. Often the trawler is a mile or two away from the flashing light which makes it very difficult to know which side of the net to pass.
We arrived at Kavala bay  on Kadavu amidst torrential rain, and that’s how it stayed for the next two days.

There are several islands that fall under the banner of Kadavu and they all are encompassed by the southern part of the Great Astrolabe Reef. We would be visiting three before we left the area.  Apparently the reef is a divers’ delight but we didn’t get to experience any of it due to the weather and strong eastly winds. We had good Digicel coverage so Liam was able to order a new motherboard for our quickly failing Mase generator.

Moving north we had an overnight stop at Nabouwalu bay, Ono island, where we were serenaded by a boat load of children on their way home from school. It was lovely to have them stop by and break into song. 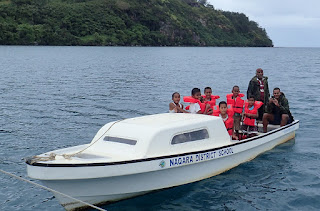 The children stopped by both Gwtw and also Rewa on their way home to the village. 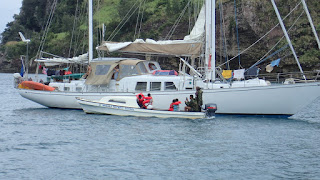 We also stopped for a few nights at Namari Island where the filming of Swedish survivor series was about to start later in the week.

We got to talk to the production crew who arrived en masse one afternoon, and having never watch any of the survivor series it was interesting to hear what the contestants have to do to win fishing hooks or tins of food etc..

The island was off limits to cruising boats for two months from the start of filming, so good thing we were there when we were. 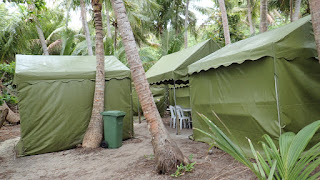 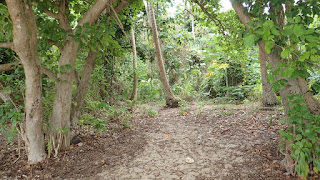 Our final island in this group was Dravuni. A drop dead gorgeous island fronted by aqua waters a long stretch of white sand, and a regular stop on the P&O cruise ship circuit. This was a very prosperous village indeed. The ship comes once a month and the village is invaded by up to a thousand tourists looking for that “ special” island experience. And they have come to the right place.

Our first task along with two other boats was to locate the Chief and engage in sevusevu, a tradition previously outlined and essential in all villages we visit.

However, finding the Chief proved difficult, we were told he was working in his garden.

So with what seemed pretty clear instructions  as in “just follow the track you’ll find him”, off we trekked only to take the wrong fork in the road, there had been no mention of a fork in the instructions, and we took the right hand track ending up at the highest point on the island.

Nice view and excellent cell phone reception, but no garden and no Chief.


After nearly three hours of walking in the heat in our sevusevu approved attire we did eventually locate him by taking the other fork in the trail and  then the eight of us and the chief, with a hoe slung over his shoulder, happily strolled back to the village for him to accept our offerings of kava.


Now this guy was poles apart from the other chiefs we’d met so far.
He sure didn't beat around the bush, in fact the whole thing was done and dusted in no more than a record braking three minutes.

No village headman to assist in the ceremony, no  hand clapping, just a “pass me the kava, ok the place is yours, have a nice stay”. 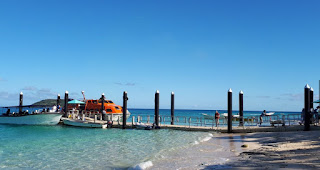 You can tell when a village has the spoils of money on tap and the villagers of Dravuni are sorted, big time. They have an elaborate modular dock they assemble to accommodate the incoming launches from the mothership.

No beach landings or wet feet happening here, no way.

Along the foreshore were numerous wooden stalls that  when the ship is in sell anything from local crafts to full-on massages.


We are talking dozens of these enterprises. And the thing we all noticed instantly…beautiful, lush grass and soft underfoot. Can’t have those tourist tootsies stepping on stones.


Also well manicured.and well defined pathways lined with borders of shells and plants. Another standout was the use of mobile phones and tablets.

Yes, these kids were into modern technology enjoying  games on their gizmos just like kids back home. In fact we  hardly saw any kids outdoors except  for some small boys tossing around a tennis ball, though we suspect we simply didn’t witness all the outdoor activities during our brief stay. 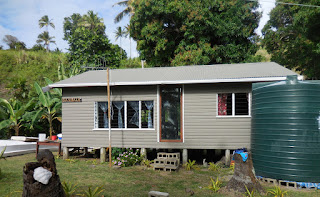 Most of the homes were modest and modern.

The one in this photo looked to be very upmarket with nice curtains and furniture as well as glass windows, something you don't see much of in the villages 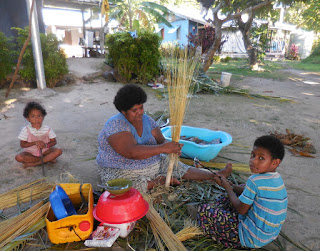 As is often been the case, the women appeared to be the workers, busily weaving mats or baskets for the next load ship load of tourists.

Very few men seem to be actively at work, though they no doubt fish quite often.

The island is very walkable and we had some exercise checking out the sights, ranging from the local cemetery to the veggie gardens and on to the windswept eastern side of the island. Pretty much every island in Fiji the village is  on the western side, away from the dominant trade winds. 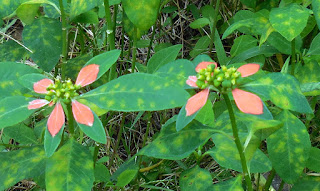 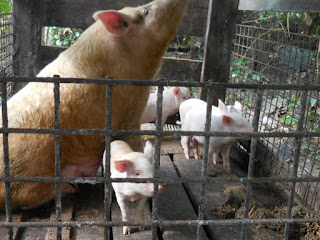 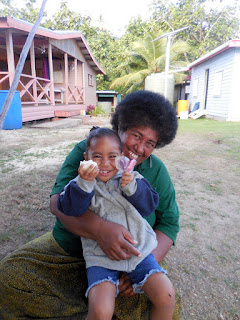 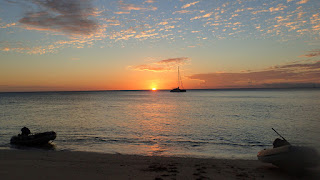 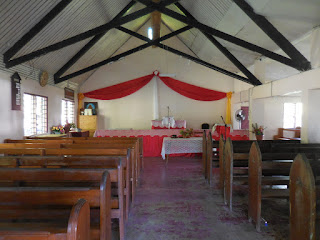 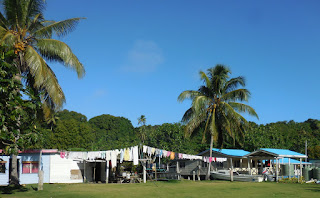 From what I’ve written it may sound as if we didn’t enjoy this island very much but really we did. We just couldn’t get our heads around how vastly different this village was compared to others we’d visited.
Believe me, this is a  beautiful place and well worth spending time here. Just check the P&O schedule before you come!