Our next stop on the island was a visit to the village of Susui just a few miles across the bay from Lomaloma. With strong winds and rain forecast a gaggle of boats began arriving into the protected anchorage.

Back tracking for a minute, the day that we were in Lomaloma, Dave from S/V Rewa who is a regular visitor to these islands each year, caught up with Jacob, the 2IC for the chief of Susui village. Dave mentioned that if a few yachts came to the village could Jacob ask the chief if a  traditional pig on a spit dinner could be arranged for Saturday night. His answer was that it would be no problem, consider it done, Jacob said. 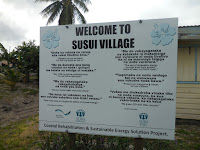 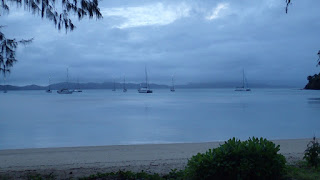 Nine boats in total arrived in the anchorage as the word had spread about the roast pig dinner on Saturday night and everyone wanted to partake.
As Rewa, GWTW and Starlet were the first  into the anchorage we hurriedly went ashore to meet the village chief and present our gifts of Kava for the traditional Sevusevu ceremony. I briefly mentioned this in a previous post but will explain more about it now.

Sevusevu is a part of daily life in Fijian villages. The ceremony marks respect and acceptance for all occasions from community meetings to healing ceremonies. It is an ancient ritual where the root of the kava or yaqona plant is pummeled into fine grains and then mixed with water to become what looks like muddy water and tastes about the same. It is a relaxant and often induces sleep if overindulged.

For cruisers like us the ceremony is an absolute must when anchored near most villages.  Here’s what happens next.

You arrive in the village and ask for the Turaga ni Koro, the village headman who will escort you and your kava bundle to the chief’s house. After a few words from the headman explaining why we are there, we are then invited inside to sit cross legged on the woven mats on the floor.


More words in Fijian and the headman collects our Kava placing it on the floor in front of the chief.
To cut to the chase, more words and clapping are exchanged between the chief and the headman and we are then given permission to anchor in the village waters, to visit freely in the village and partake in village life and to swim, snorkel and catch fish in their waters.
If you do not present yourself for Sevusevu it is akin to some stranger pitching a tent in your front yard, using your water and tramping around your gardens without so much as a hello to the occupants of the house. A big no no in other words. 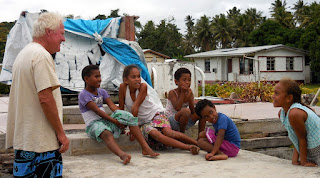 With Sevusevu completed we were then besieged by a group of village children who showed us around and walked us to the beach on the opposite side of the island.

They all spoke excellent English as this is the main laungage of Fiji and are taught it at school from an early age. The kids had a old soccer ball and wanted us all to play with them. 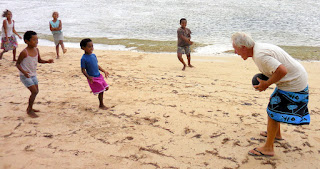 I tell you these youngsters need to be cloned and sent out to first world countries to demonstrate that you can have fun without the aid of games on your phone or computer or spend hours watching television, and  that you don’t need to burst into tears and say its not fair when someone else is playing with the only ball around. 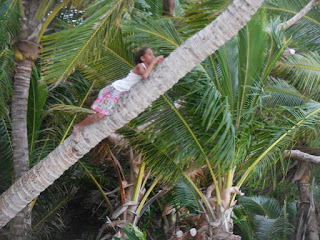 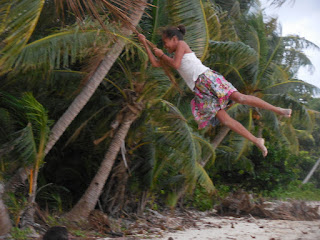 They have the most genuine personalities and biggest smiles and play outside whether it’s glorious sunshine or pouring rain. They are happy because they have uncomplicated lives. They captured our hearts.


Saturday night rocked around and the whole village had pitched in to cook dinner for the 33 cruisers who had turned up. It cost $FJ 50 pp and there was more food than you could poke a stick at.

The feast included the roast pig, lobster, a variety of fish dishes, chicken, curries and a variety of vegetables cooked in an earthen oven called a Lovo.

The village ladies and children wore their Sunday best while the men were all dressed in the sulu’s.

Dinner was held in the school and the 23 children who attend the school put on dancing and singing to entertain us.

All the cruisers were invited to join in the kava ceremony but one by one we ladies excused ourselves leaving the men folk to it.

The following day, Sunday, about ten cruisers fronted up for church.

Unlike churches we've seen throughout the south pacific this one was just a small corrugated iron building.

Actually it was more like a big garden shed, but if that's all you have then that will do.

The service was all in Fijian but the even so the singing was lovely.  Afterwards we were split into two groups.

One of the school teaches took one group to her home while we were invited to have Sunday lunch with Jacob’s family. Another great meal was consumed and we felt it was a real privilege to be included in their family life.


Over the next few days the village ladies baked bread for us and gathered fruits and vegetables for our dwindling stocks. Liam and Dave from Rewa set about fixing some plumbing and electrical issues at the school. 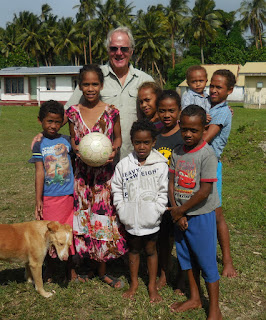 All good things come to and end would soon be time to move on again. But before we did  we made one last trip into the village, we’d found a Fuji Film logoed soccer ball buried in our storage area in the bow and deservedly gave it to the kids, now they would have two balls to play with. Their eyes lit up.

As we pulled up the anchor all the kids and the adults lined the beach and waved and shouted goodbyes. In return we waved madly, blew kisses and honked our air horn. It was a teary moment for all.

We'd had a wonderful time interacting with this small village over the past six days and the friendliness and kindness of the people of Susui will remain in our hearts for a very long time. 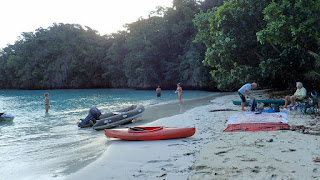 Next stop for just one night was at the island of Avea roughly half way up the east side of the Island.

We went ashore  with the crew from Rewa to a delightful spot in a semi enclosed lagoon. Sundowners and beach frisbee  made for  a very relaxing afternoon'


From here we retraced our track around to the Bay of Islands on the western side. Here were found a particularly good snorkel spot with amazing fish life and stunning bright orange fan corals. 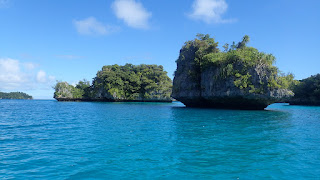 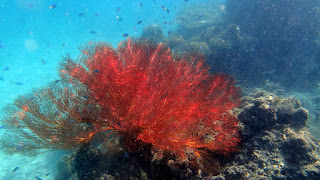 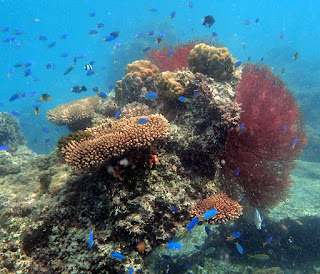 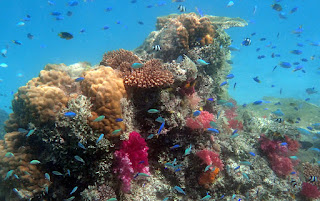 Sadly we could only afford to spend a few hours here before leaving the northern Lau group for an overnight passage to the next island of Moala, some 120 miles to the south west. 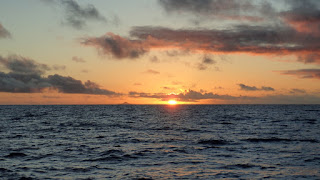