The Town Basin marina is a very social place to say the least. More that half the boats here have crossed the Pacific and as you know, we cruisers will take any excuse to get together.

Another year rolled around and Annie celebrated her 60th birthday with friends, champagne and  even a brass band playing happy birthday. 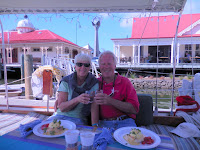 Happy hour on Wednesday evenings always draws a good crowd as does the ladies lunch on Thursdays, another very popular event. It’s so nice to get out and jabber with the girls without the men folk hanging around. 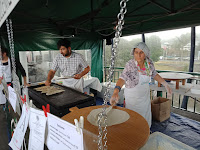 Saturday mornings the covered canopy bridge just up stream from the marina hosts an artisan craft market and on selected nights the bridge is transformed into an  large outdoor restaurant with a variety of vendors selling made-to- order meals from all over the world. My favourite was the Turkish stall.

Many of the pubs around town put on regular quiz nights and live bands.The Fleetwood Mac cover band “Landslide” was a real hit up at the Butter Factory.

Music in the park right on our doorstep was another great weekend free concert with brass bands, youth orchestras and Scottish pipe bands making regular appearances. So there was no excuse  not to get out and about 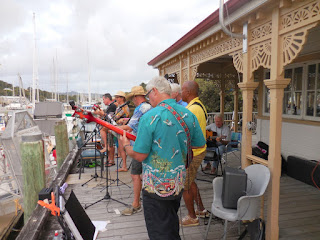 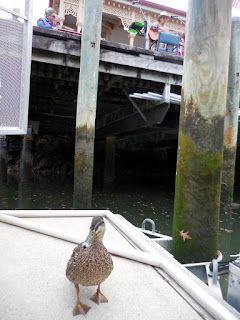 For  those who are musically inclined like Liam there's been ample opportunity to get together with like mined people for jam sessions a few times a week. At last count the band,  now known as the Barnacle Pluckers, comprised of three bass guitarists, three ukulele players, four acoustic guitars, a violinist, a keyboard player, a cellist, a bongo drummer and an assortment of percussionists. And man could they make a noise, it was a lot of fun. Even Mackenzie, the marina's party duck was in  attendance.


They put on a couple of shows at the marina and they were pretty damn good. 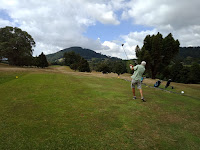 We became  quite fond of having a round of golf with with a couple of other cruisers pretty much once a week. I would go as far as saying our games have improved but we can sure  manage to hit the old *#%k shots without a problem.  Four courses were close by and they all offered heavily discounted prices on Sundays, Mondays and Fridays, so you can guess which days we always played.
We also organized a bridal shower for Bernice from Sea Flair who was flying back to her native South Africa to marry Grant, the man of her dreams. 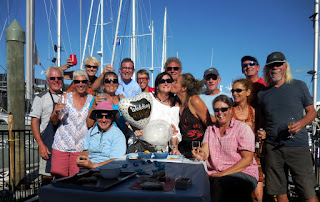 Much of the attraction of coming to NZ is to have work done on the boat and  getting out and about to explore the country by car.  By March we’d pretty much ticked off the boat chore list so it was time to hit the road and see the sights. Friends on Where 11 and Y2K were kind enough to let us borrow their cars so that we could do a bit of the North Island.

Scratching the surface with a little Tiki Touring

Over the course of a week we took in the best of the northern part of the island. Our journey took us up the coast to the Bay of Islands town of  Keri Keri. It was time for a lunch break so we headed out to the 1832 Georgian style “Stone Store”.

Over the years  the sandstone building has played many roles including as a boy’s school, a trading post, barracks and a library. 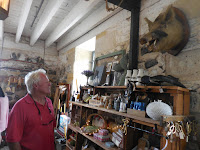 These days it’s a quaint gift shop surrounded by lovely gardens and a trendy café.
From here it was on to the seaside village of Mangonui  for the night and to taste test the famous fish and chips the town is renowned for.
It was a big serve with a great setting so that scored a tick in the box. Having thrown the golf clubs in on the off chance that we spot a nice course during the trip, we  were pleased to be able to get a tee time at the ever so friendly Whangaroa Country Club. 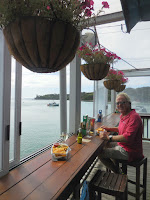 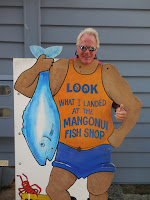 Heading inland across the island we stopped in Kaitaia on the west coast for a couple of nights. We'd been told that driving up to Cape Reinga and  along Ninety Mile Beach was not so practical in a car such as ours as the beach could only be accessed at low tide and that you really should not attempt it in anything but a four wheel drive. So we splurged and booked ourselves on a bus tour for the day. It was a good move.

There are plenty of tours ranging in prices and they all include lunch and pretty much are identical in all other respects. We chose to book with Harrison's  who provided door to door pick ups. The drive along Ninety Mile beach was great. We never realised how vast the sand flats were, until we'd driven them.

The Snapper Bonanza fishing tournament was in full swing that day and literally hundreds of eager anglers lined the beach hoping to snare the catch of the day, in weight and take home a purse worth $30,000.
Now that's a lot of dosh in anyone's book for catching one fish.

As we continued our run up to the cape we stopped for a bit of fun at some massive sand dunes, where of course we partook in the local pastime of dune surfing.Climbing up the dunes  with board in tow was a feat in itself. Flying back down the dunes with the wind in your hair was something else. Liam was grinning like the proverbial by the time he got to the bottom. 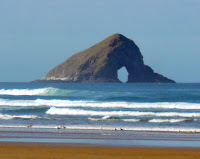 Moving on there was plenty of jaw dropping  vistas as we made our way north to the top of New Zealand.. This is  the point where the mighty Pacific Ocean comes head to head with the often ferocious Tasman Sea.

From our vantage point high above  the lighthouse you could actually see the waves crashing into each other. It was an awesome sight, especially for us who spend 90% of our lives on the sea. 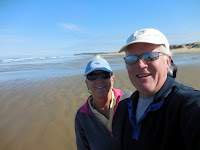 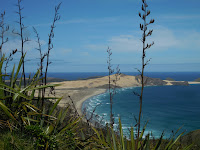 The Waipoua Forest was on our way south  to our next destination of Dargerville  so we stopped off to take the Tane Mahuta Walk and pay our respects to Tane Mahuta, the two thousand year old  "Lord of the Forest”, the largest living Kauri tree in the country. Quite a sight really.
The trunk girth is 13.77m, trunk height is 17.68m while the overall height of the tree is a staggering 51.2m. 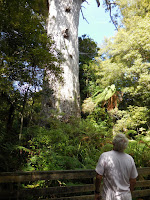 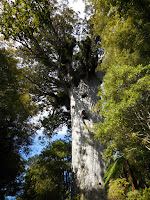 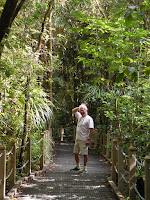 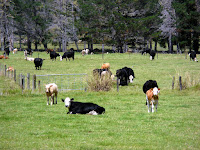 From Dargerville the road took us back east through picturesque farmland and green rolling hills dotted with sheep and cattle.

We stopped again for another round of golf at Sherwood Park  and from there it was just a stone’s throw back into Whangarei. 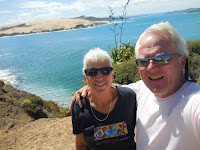