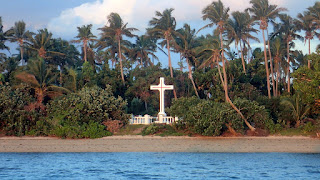 The 160 mile trip down from the Ha’apai was a very pleasant one. Yet another green flash made for an excellent departure sunset. Just before the evening light faded completely we could see way off in the distance the extinct volcano of Kao with it’s classic triangular shape and the still active  volcano,Toufa. Toufa blew it’s top off back in 1960 and is now  pretty flat but it’s still a smoking gun. Tonga has 16 volcanoes strewn through her waters, some active and some now extinct. As night fell a cloudless sky gave us a box seat view of millions of stars twinkling overhead. The odd shooting star was an added bonus

One night passages are not really our favourite. We can’t quite get into the sleeping rhythm that multi day ones afford us. So when we get to our destination we feel just as wiped out as we do on longer trips. This one was no different.

Arriving at midday we anchored off the beach of tiny Pangaimotu Island. Here is the home of Big Mama’s Yacht Club restaurant and bar and it’s pretty much the centre of the universe for cruisers waiting to make the jump west to Fiji or south to New Zealand.  Sadly, Big Mama’s was severely damaged by Cyclone Gita in February 2018 but has slowly been rebuilt and is now back in business.

An end of season farewell bash for cruisers put on by owners Ana and Earle is a tradition here. The food is laid on big time including the traditional Tongan pig roast.
Entertainment was provided by the Tonga Police Band and everyone, locals and cruisers alike took to the sandy dance floor, rocking the night away. We were chuffed to be able to attend  this annual dinner given that we usually miss out on such events by 24 hrs as a rule.

Left ; Karen from Where 11 and Sylvia from Cinnabar. I'm in the middle.    Right ; Matt with Karen and Tom with Sylvia

Above and  Right: A typical Tongan feast with Roast suckling pig. Liam was enjoying filling his plate.

Below: The Tongan Police band belting out the hits while everyone danced the night away. Liam displayed some of hid best moves.

Over the coming week we topped up our dwindling fruit and veg supplies, did a quick walk around the capital of the country, Nuku'alofa, organized our clearance papers and the purchased duty free fuel which in itself was no mean feat. 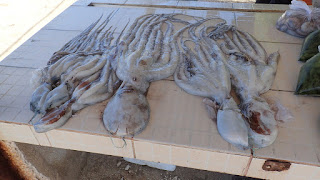 In order to purchase the fuel first up was a trip to customs and immigration to obtain the fuel docket, then it was a healthy stroll out of town to the fuel depot to arrange how much we needed and to pay up front. Oh and we could only order in 200 L quantities we were told. So with that done next question was what time will the tanker arrive? Tanker the man said, oh no the tanker is too busy, your fuel will be coming in 200 litre drums with a hand cranked fuel pump. Really? Well who were we to argue, we needed the fuel. With the fuel docket stamped for delivery at 10am the next morning it was back to immigration to pick up our clearance papers for New Zealand.

We’d ordered 600 L of diesel,  200 of which friends on Where11 bought off us to save taking both  boats over to the "not so friendly to the topsides" harbour dock. Filling our tanks was a  painfully slow process as the hose on the hand pump was too short to reach our deck fillers. Solution, it had to be pumped into our 20L jerry cans first and then poured via a funnel into our tanks. All of this  took hours and was done in the sweltering noon day sun.


Job finished GWTW was motored back over to Big Mama’s anchorage to sit out the strong winds forecast for the following few days. We also had to keep a low profile as technically once the duty free fuel is on board you are actually supposed to leave the country. So we stayed under the radar for 3 days by turning off the transponder on our AIS (automatic identification system) which is monitored by the marine authorities and kept our VHF radio chatter to a minimum and definitely did not use our boat name over the airwaves.

Having said our goodbyes to fellow cruisers as some would be heading to Fiji for cyclone season while others would be making landfall in various parts of New Zealand, it was time to go. With the forecast of a good weather window, we departed the anchorage off Big Mama's and headed eight miles further west to an anchor on the back side of Ata Island. This would be our jumping off point from Tonga for an early morning departure the next day.

At 0600  November 7th we raised the anchor for the last time in Tonga and motored out through the reef break to raise the sails and point our bows towards the land of the long white cloud, New Zealand.

Tonga had been a great experience for us, one that we’ll remember for a long time to come, even though the weather had played havoc with our cruising plans at times.

If the conditions allow we’ve planned to make a intermediate stop on our 1200 mile journey for a few days at Minerva Reef,  some 250 miles south of Tonga.

Email ThisBlogThis!Share to TwitterShare to FacebookShare to Pinterest
Labels: Tonga