Our second road trip took us south towards the big smoke of Auckland and beyond. We celebrated Liam’s 68th birthday with friends Sylvia and Tom from S/V Cinnabar here in Whangarei and then we hit the road.
Stop numero uno was at the oil refinery at Marsden Cove, just an hour’s drive from town. Usually that sort of thing wouldn’t excite us but it was a fabulous facility with excellent exhibits and informative videos. Well worth the stop we decided. 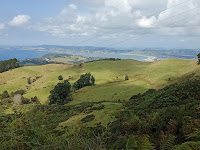 From here we took the off the beaten path roads following the eastern shore south. Up hill and down dale the roads snaked through the beautiful countryside.
Some of the views were  along the way were quite jaw dropping.


After staying a few nights with retired cruisers Mark and Amanda from Balvenie, we took off to the Coromandal Peninsular and the town of Thames.
We found a great air b&b for a couple of days and explored the area, walking the trails of the Karangahake Gorge and ruins of some early 1800’s gold mines and yep, fitted in another round of golf. 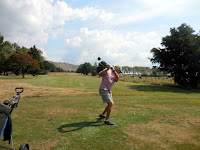 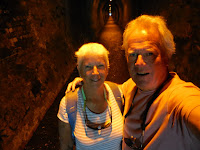 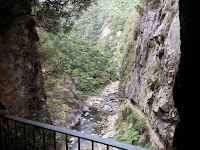 After staying a few nights with retired cruisers Mark and Amanda from Balvenie, we took off to the Coromandal Peninsular and the town of Thames. We found a great air b&b for a couple of days and explored the area, walking the trails of the Karangahake Gorge and ruins of some early 1800’s gold mines and yep, fitted in another round of golf.

Continuing south to the seaside city of Tauranga  we caught up and stayed the night with one of Liam’s former business acquaintances, Bruce and wife Maureen. After a nice meal out we girls went to bed early but the boys being boys stayed up late and woke up a bit dusty Sunday morning.
From the east coast we hightailed it cross country to west coast to visit the Waitomo Caves. Under the green hills of Waitomo lies a labyrinth of caves, sink holes and underground rivers. Now these aren’t just any old caves, they have become famous because of the thousands of glowworm colonies found deep inside the cave system. I’m talking over 100 ft underground.

Sadly none of my glowworm photos came out so you’ll have to take it from me that it looked like a starry night down there. While in the area we also took a  side trip to the Mangapohue natural bridge, a 17m high limestone arch which used to be part larger cave system and  also stopped at the Marokopa Falls
Next morning we were Hamilton bound by way of the Te Awamutu golf course, where we managed to squeeze in another nine holes. After a night in Hamilton it was back to Auckland  where we took the opportunity to check out the Auckland fish market for a tasty lunch, before visiting the excellent exhibitions in the Maritime Museum.

One of the best exhibits focused on the life of Sir Peter Blake, a true legend in world sailing. Over several decades he successfully competed in round-the-world races and was the driving force behind several Americas Cup challenges, including New Zealand's’  1995 victory in San Diego. Coincidentally, we were actually there to catch some of the action, quite a thrill really.

Tragically, Sir Peter was murdered by intruders in December, 2001 while on an expedition up the Amazon river.With our road trip over we  headed back up to GWTW in Whangarei. 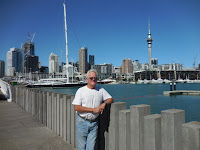 While it was great to be back on board with familiar surroundings, it was also terrific to take in some of the many fantastic sights the north island of New Zealand has to offer. And also experience first hand the wonderful hospitality of the locals. Without this time ashore our visit to Kiwi land would certainly have been less than complete.