Leaving Tonga we were greeted with a southeast breeze of 15 knots and lumpy seas on day one of our 260 mile run to  North Minerva reef. As the forecast was for the wind to increase later in the day we took the prudent sailors’ option of putting a reef in our mainsail. This sail configuration along with a full jib had GWTW cantering along at  a respectable 7-8 knots of boat speed. Nice. 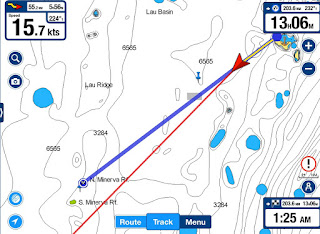 By 2pm the ball game had changed. The wind had increased to 20- 25 knots and the seas were getting very rough at 2-3 m. We were now rocketing along towards the target at 15.7 knots. Hold on to your hats ladies and gentleman!  Our old girl, GWTW, not the other one, was starting to protest with creaks and groans, so for the comfort of all concerned we dropped the mainsail down to the second and last reef point and furled the jib 3/4 size. The theory was that that would slow the boat down and give us a more comfortable ride.  Theory v’s reality. Well we got the comfy ride but our speeds were still up there, peaking at 16.1 knots.

Throughout the cold dark night gradually the wind began to ease and by 4am the rough seas had moderated and our speeds had fallen back to single digits.  As 6am rocked around and our ship’s log revealed GWTW had cracked her former distance record and that she now had a personal best of 226 miles in 24 hours. Way to go girl! 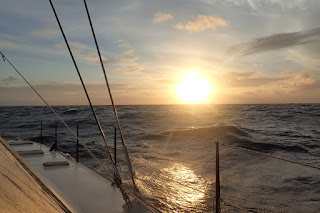 Those fast speeds sent Jenny our generator into a spin and she picked up her toys and went home. She was being starved of water as we tore up the big blue highway and she doesn’t much care for that.
By 8am she’d regained her composure and went back to the business of doing what she was programmed to do…make electricity for our floating home. 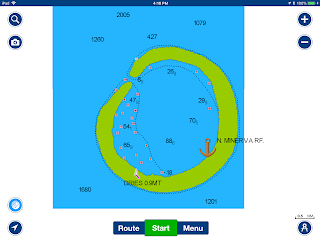 A little info on Minerva Reefs
North Minerva Reef,and yes there is a South Minerva as well, are just specks in the vast South Pacific Ocean. A pair of submerged atolls.  Unless you zoom right in on your chartplotter you won’t find them or maybe you will unintentionally. The latter being every sailors nightmare.
North Minerva is circular in shape with an opening  through the reef into the lagoon on it’s western side. The atoll measures roughly 3.5 miles in diameter and shallows towards the inner edges of the reef from depths of 70ft in the centre of the lagoon  to 20ft or less around the perimeter. A single flashing light marks the south western side of the reef. 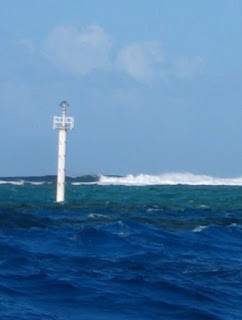 The two reefs were ceded to Tonga in 1972 by the South Pacific Forum. A Tongan expedition was sent out to lay claim and the Tongan flag was raised at North Minerva on June 19th of the same year. Fast forward to 2005. Fiji declared that it didn’t recognize any maritime claims by Tonga to the Minerva reefs. Later that year Fiji lodged a complaint of Tonga’s ownership with the International Seabed Authority and as you would expect Tonga lodged a counter claim.

In 2010  the Fijian navy destroyed the sole navigation light, which the Tongans had installed atop the reef to warn sailors of their impending doom. The Tongans  sailed out and rebuilt it.  This was again repeated in May 2011 and in June the Tongans were back rebuilding the light structure. We’ve been told that the reefs are still in dispute today. 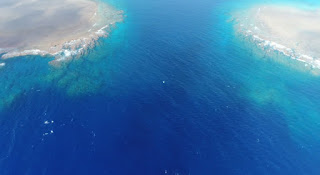 In we Go
Just before 2pm we entered the pass in the reef at North Minerva. It’s a nice wide western entrance that opened up a whole new world of a tranquil lagoon with  stunning water colours.
Dropping anchor in the middle of the ocean with no land for hundreds of miles in any direction is a bit strange to say the least. Only a few hundred meters of encircling reef separated us from the crashing ocean waves outside.

We motored across to the south east side of the lagoon where the reef was a tad higher than the rest, therefore giving us more protection at high tide. Dropping the hook in 15ft of turquoise water over sheer white sand….perfect. We’d hadn’t seen water colour like this since  our time in the Bahamas. 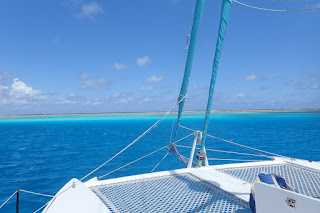 The following day was a lay day so Liam and Tom from Cinnabar hit the water in search of lobster. They spent hours checking out as many nooks and crannies as they could find and were about to give up when three good size ones were spotted. Two of the three got away unscathed, but Liam managed the killer shot on the third.

Next morning all the other boats left for New Zealand. We were now truly alone, anchored on this little patch of shallow water in the middle of the ocean…eerie stuff.


We’d planned to stay in this idyllic place a few days longer as we were waiting on friends from Where 11 to show up.  But they had a change of heart  along the way and emailed us that they’d decided not to stop. Had we known a day earlier we too would have headed off with the other boats. It’s always nice to have company on a long passage. ...c'est la vie.

We had a rethink and decided that with a strong low pressure system approaching we’d leave at day break and make a run for NZ in the hope of making landfall before we smacked by the strong south easterlies. It would be an 800 mile run against the clock.


What’s up Doc ?
Something just didn’t sound right as we raised the mainsail the following morning. The halyard and the windless pulling it to the top of the mast was making a horrible screeching sound. It took a moment to figure it out and then we realized that the outer core of the halyard had separated from the stronger inner core, The noise we’d heard was the halyard slipping as the windless tried to grab it with each turn. Luckily it had failed just as we reached the first reefing point, so we would still be able to keep the pace up. Once the wind kicked in though we’d have to put the second reef in and that would be how it would stay until we reached NZ regardless of the wind conditions as it was impossible to raise the sail any further. 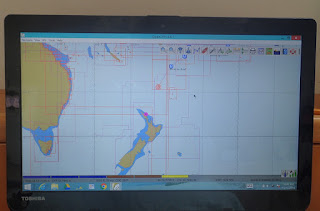 The closer we  inched toward New Zealand the further the mercury dropped.
We’d been in the tropics for such a long that we just weren’t ready to don track pants and fleeces, but we had no choice.
It was a good thing that I'd unpacked them and our doona before leaving Tonga. 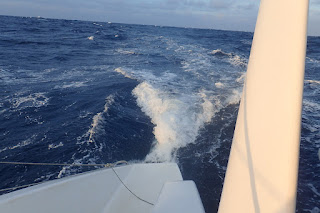 The 800 mile passage from Minerva Reef to Opua in the Bay of Islands, New Zealand took us four and a half days.

By far the final twenty four hours was the roughest we’d experienced since sailing out of Sydney heads back in 2006.
Thirty knots of wind, driving rain and the accompanying rough seas  hit us like a freight train at  2am and didn’t let up. Ten foot breaking seas crashed into us dead on our beam.
Water cascaded over the entire boat and the cockpit floor looked more like a swimming pool rather than its usual dry self.

The books off our bookshelf all hit the floor and it was impossible to sleep when off watch due to the noise and the violent motion. Our dingy hanging from its davits broke a line when a massive wave dumped itself into it and we were perilously close to loosing our only form of transport from the mothership to land as it swung violently side to side just inches above the hungry waves. We clung to the thoughts that it wasn’t much further to sail.


The land of the Long White Cloud
Finally at 10am on November 15th the ”land ho” call ran out. Just barely visible on the horizon was the land mass of New Zealand.

By 4.30 that afternoon, we’d been cleared by customs, immigration and biosecurity and we motored into our berth at the Bay of Islands Marina.

Stepping ashore with rubbery legs we strolled up to the clubhouse for a quick bite to eat and catch up with friends we’d met during this years passages.

By 7pm The Sandman was banging on our door and we could hardly keep our eyes open. We fell into bed for a totally well deserved calm night’s sleep.

We’d finally made it to New Zealand and  with that yet another chapter in our cruising life has closed.