Fakarava : The second time around.

Leaving Kauehi and our terrible experiences behind us we set our sights on the north pass of Fakarava. We’d spent some time at this renowned diving atoll towards the end of 2017 and Liam wanted to return to do a night dive with the rather populous shark community which inhabit the South Pass. I, on the other hand,  already have an appointment to wash my hair on which ever night he decides to play with the men in the grey suits.

It was a 40 mile drifter pretty much dead downwind from pass to pass, but we were in no great hurry. The north pass is very wide so even if we were late for the slack tide it wouldn’t present much of a problem. 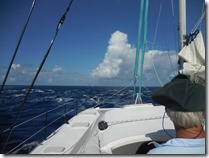 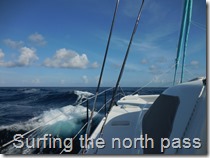 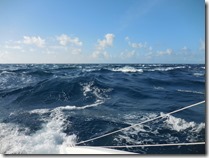 I must say our entry was a little sporty, The tide had already turned and there was quite an overflow effect happening. The water in the lagoon was trying it’s best to flow out while the pacific ocean was trying to muscle it’s way in. GWTW surfed down quiet a few  good sized waves but our trusty 75HP Yanmars held their own and made it look like a walk in the park. Pretty soon we were through the rough stuff and slipping across the flat, calm waters of the lagoon. 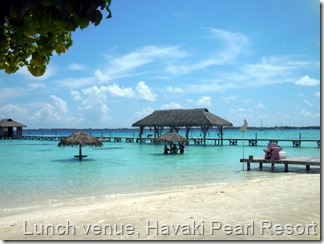 We headed straight over to the main town of Rotoava and dropped the anchor just as the light was starting to fade. Not an ideal time to be putting the hook down but there was no choice as all the mooring balls were occupied.

Our four days in the town were busy. First up Liam had a visit to the health clinic for an infected sore on his arm which required some treatment and antibiotics. We also needed to buy outboard fuel for the dinghy and had an empty propane tank to refill. Fakarava Yacht Services (FYS) was able to help on both counts. 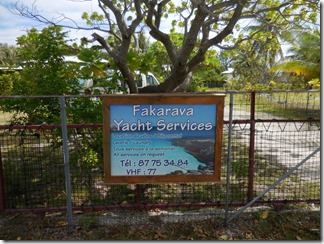 The Cobia supply ship came in Wednesday morning and by 3pm, once the shelves had been restocked, the rush was on to beat the other cruisers who had appeared out of nowhere for fresh veggies and other delicacies not normally seen in these islands. I was in hot pursuit for plump red tomatoes. Every store I went to had some but they looked like they had done a few rounds with Mike Tyson. One shopkeeper told me that they were only fit for the rubbish bin.

Cruiser’s note: Diesel fuel can be bought from the Cobia if you call them up on the VHF radio and they have some to spare, if not place an order to come on next week’s delivery. You can either side-tie your boat to them and they pass down their fuel hose or take your jerry cans to the town dock and they will fill them there. The fuel is the regular price, not the duty free price 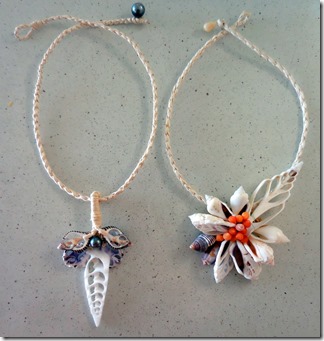 The cruise ship Paul Gauguin also rocked into town spilling her human cargo onto the streets for the better part of the day.

The ship carries 1,000 passengers, a little overwhelming for the town of Rotoava.

The upside was that the jewelry shops and stalls were open for business and I was able to start procuring a new collection of artisan shell necklaces to replace some of my everyday necklaces that had been stolen. 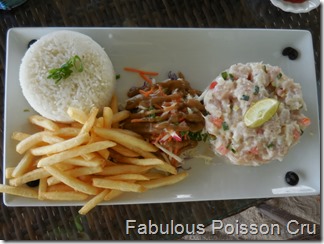 During our stay in the “Big Smoke” we had a couple of meals ashore with our Swiss friends Iris and Martin off  the cat Kalea.

One night was at a local café named Palliotte and another at La Roulotte Vaiiti just a few mins  walk south on the main road from Havaki Pearl Resort, where we’d had lunch overlooking the lagoon the day before. It was a real treat to be in a place where you could actually go out for a meal. 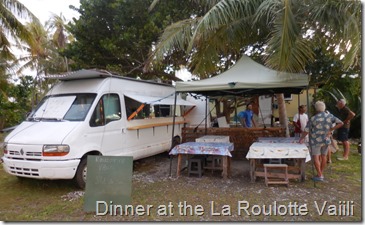 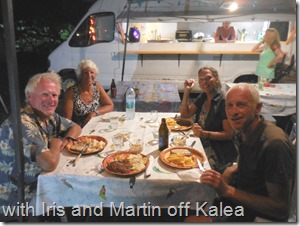 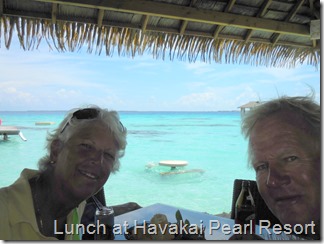 We had planned to move on to another anchorage the following morning, but  as we went to lift the anchor it had become snagged around several bommies. It took Liam at least six free- dives  in 32frt of water to sort out the cat’s cradle of chain. We then moved onto a vacant mooring ball. Kalea’s anchor had also become entangled in a coral bommie and no amount of coaxing would set it free. So we stayed to help them locate the anchor which had been unshackled from the chain, but sadly not marked with a buoy. They moved onto the town dock for the night  A day and a half later and after much scuba diving, the anchor was found. Moral of the story.. don’t unshackle your anchor from the chain without putting a marker buoy on it first.! 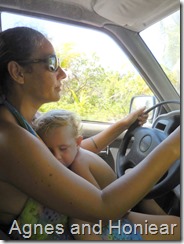 With the anchor back on board both boats headed to Pakokota, which is around eleven miles to the south of Rotoava. We pulled out the jib and had a gentle sail down.

Pakokota is very popular with the cruisers as the owners of this small bungalow resort offer free mooring balls and wi-fi, so long as you go in and buy a beer or soft drink. For a small charge they will also run you back to town for supplies. I caught a ride with Agnes and had to snap this photo…of the child restraint seat. This arrangement probably wouldn’t cut it back in Oz! 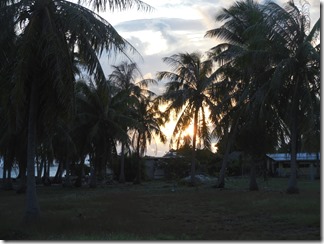 Once you have the wi-fi code which is valid for 24hrs you can go back to your boat and surf the net until your heart’s content or your megabytes run out.

We caught up with friends Caro, Kurt, and their crew Diane on the USA-Maine flagged boat “Icebear” who we’d met up in Rotoava. They stayed here a couple of days and we enjoyed their company and having dinner both on their boat and on shore one night, when Agnes and Mathieu cooked a group dinner for GWTW, Kalea and Icebear. 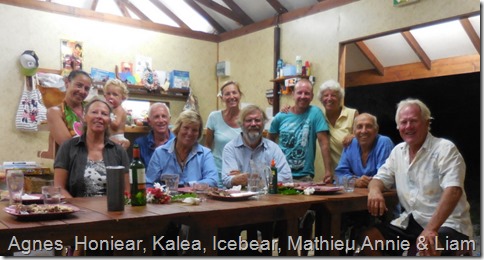 Pakokota can be a very social spot to spend a few days as there is a regular stream of fresh faces with interesting stories stopping by. It’s also very hard to tear yourself away from the lure of the internet, but that’s not what cruising is all about. It’s about getting away from it all.

So today or maybe tomorrow we will head further south in search of another magic spot to stop for a while.