The bus ride from Cienfuegos to Havana took around 4 hours, arriving just after 1 pm. Our original plan was to visit Havana for one night, hire a car, drive out to Vinales for a few days and then return to Havana for five days.  As luck had it when we arrived at the bus station in Havana the bus to Vinales was leaving in 45 mins, so we asked about getting a ticket only to be told that the bus  fully booked, but the lady said to hang around as there were often “no shows”.  With half a dozen or so other hopefuls, we waited and waited. Then at the very last minute the ticket lady hailed Annie and handed her the last 3 tickets. 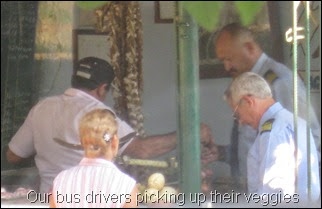 This next sector  took a little over two hours with the bus making a stop for refreshments, a usual practice as we were discovering. And the drivers also stopped a few times to do some roadside vegetable shopping. Liam was seated with a lady from Vinales, and it turned out her uncle ran a Casa Particular.  After making a quick phone call  it was sorted, our accommodation was arranged. There are over 400 Casa Particulars in Vinales and the bus was met by dozens or more very enthusiastic owners eager to secure some customers for their vacant rooms. It was a very raucous scene with people jostling and shouting while we passengers attempted to gather our bags. 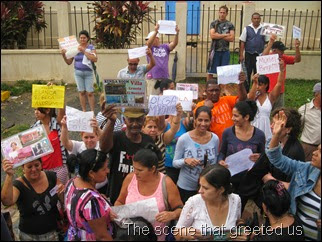 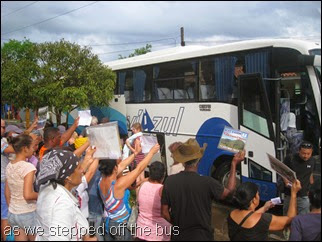 Walking to our casa, Delia, the lady from the bus, informed us that her uncle’s house was now full, but a good friend across the street  at Casa Fernandez could fit us in. It worked out fine, albeit the roosters in the yard next door were very vocal at sunrise. 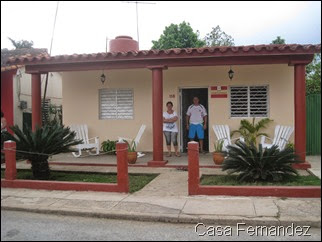 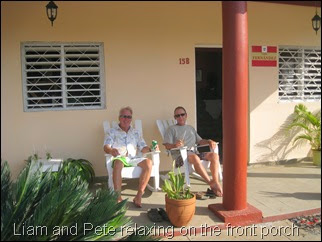 Vinales is all about rock climbing, walking trails, horse riding and generally taking things easy. It’s set in a stunning valley  with limestone hills called Karsts, the valley  stretches for many miles and is a rich tobacco growing area. Agriculture is a big employer here, though tourism really dominates local activities.

Four kilometers out of town is the Mural de la Prehistorica, so we decided to head out there on the hoof for a bit of exercise, although we didn’t get far before the CUC signs flashed before a passing farmers eyes.

He already had a local woman and her small child in his buggy heading  in the opposite direction to us but he quickly ditched his passengers, made a u- turn and came back offering us a ride. We took up his offer only because the woman had already caught another lift to wherever she was headed and it was damn hot walking. 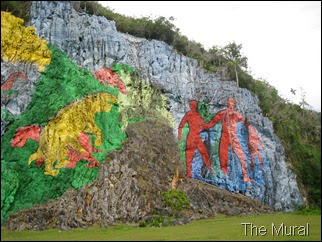 From quite a distance we spotted the “artwork”, albeit a little on the strange side, painted on the side of a cliff. It shows three humans, a giant snail, dinosaurs  and sea monsters which apparently depict the history of evolution. Spanning 120m long the mural took 18 people four years to paint.There are differing opinions on the mural, some say it’s a stroke of genius whilst others think it’s a monstrosity. 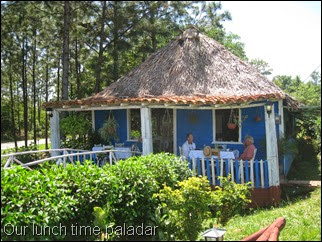 With lunchtime  fast approaching we took a taxi to a nearby paladar  recommended to us by some Canadians who are regular visitors to these parts. The food was tasty and there were lashings of it, just what the doctor ordered.

Later that arvo we signed up for a 3 hour walking tour, taking in a tobacco plantation and some pleasant trails through the nearby countryside. A farmer demonstrated his skills at rolling cigars and we all sampled a puff. The lady of the house told us she enjoyed 5 cigars each day, all home grown and rolled. 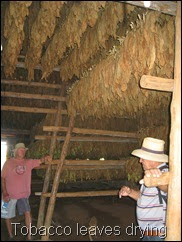 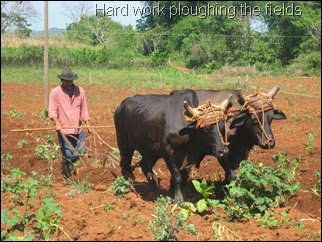 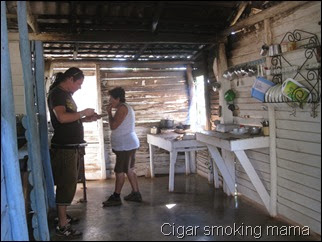 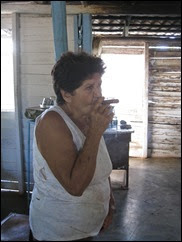 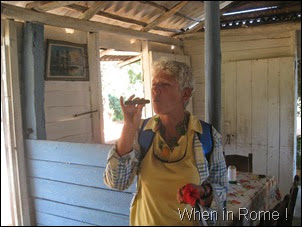 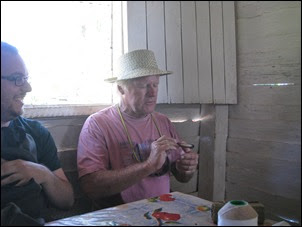 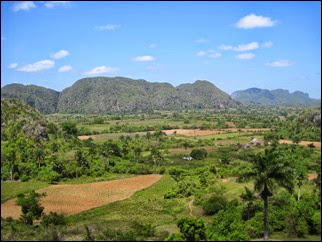 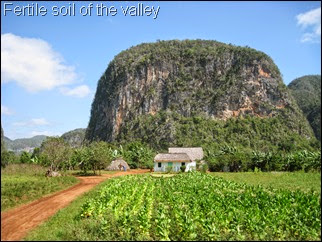 Along the main street of town there were stalls being erected, a carnival of some sorts was scheduled for a few days time and people were busy preparing their offerings. 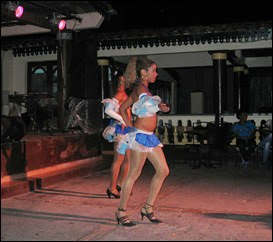 Vinales has a reasonably famous, in local terms anyway, music/dance club, so naturally we went along. It was a good show with 5 dancers and a lively band, and some locals also joined in the spirit and took to the floor. The Spanish are excellent dancers. We kept to our seats, salsa is definitely not our forte.

Another organised tour saw us revisit the mountain mural, go to another tobacco farm, explore some caves that fleeing plantation slaves used for refuge, call in to another set of caves and take a brief boat ride along an underground stream, and then stop for a  very good lunch. Add in a couple of well patronized bars  and we felt we had covered most of what scenic Vinales has to offer.

We saw some memorable things here. Pairs of oxen pulling ploughs were commonplace with not a tractor to be seen in any fields. And oxen were also prominent in carting rocks, sand, bricks and generally heavy loads in their rickety wagons. Bicycles easily outnumbered cars, and the cars were usually decades old. Local buses were also old and always in terrible condition. And, as with everywhere in Cuba we have visited, the people were smiling, welcoming and gracious, they are terrific hosts. 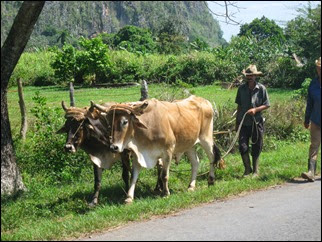 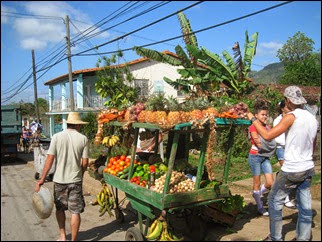 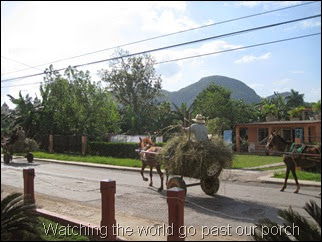 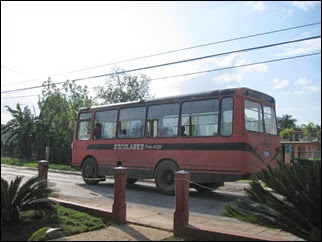 Even though  our visit was short we enjoyed our time here. Now Havana beckoned and we were eager to get there.