Santiago de Cuba is the country’s second largest city, though it’s more like a big town really and is about 12 kms inland from the marina. 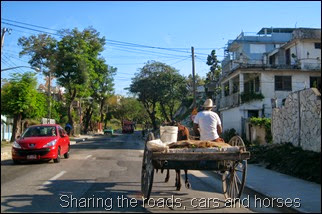 There is no bus service from the marina, but plenty of people wanting to make money,so we caught a “taxi “to town. The trip in was a real eye opener as was the taxi we travelled in, an old blue Russian Lada. It didn’t take much grey matter or eyesight to work out that it’s use by date had long ago expired. Horse drawn carts and buggies, cars of yesteryear, bicycles, trucks that looked they should have a cargo of cattle rather than people and even a poor guy in a wheelchair shared the pothole littered roads. Dozens of people stood on corners waiting for either a bus or a lift to somewhere. Many simply  walked. As we got nearer to the city centre  the narrow streets lined with ageing and abandoned buildings became frenetic with traffic and people.

Our driver dropped us at the Parque Cespedes, a pretty square in the centre of town which seemed to double as a melting pot of Cuban life and sound.  Bounded by a Cathedral on one side and the Parisian looking Hotel de Casa Granda on the other, in the heat of the day we adjourned to the terrace bar of the hotel to soak up the atmosphere and partake in the national drink, a refreshing mint infused mojito. 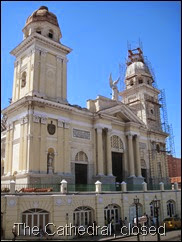 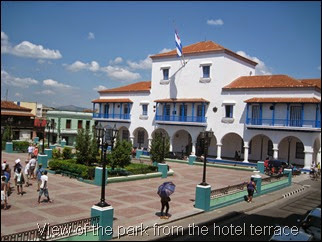 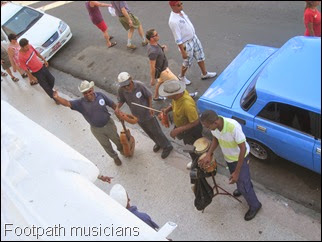 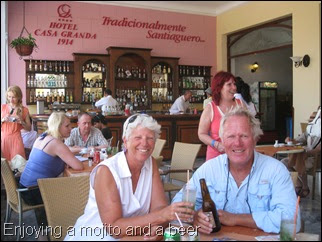 From our vantage point the comings and goings in and about the square was fascinating. Elderly couples sat chatting on the park benches, tight fitting lyrcra clad women in high heels, who looked more like they were off to a disco than the shops, rushed by, tourists congregated on the corners ready to follow their guides around town and musicians stood on the footpath below  playing catchy Cuban tunes. It was a feast for our senses.  With tummies a rumbling we left the hotel in search of  what we’d been told was the quintessential  Cuban lunchtime staple, the 5 Peso pizza. It didn't take us long to find a hole-in-the-wall  place selling them, actually  it was the the queue that gave it away. 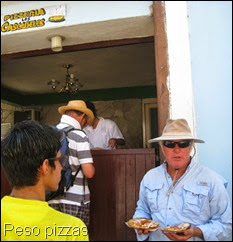 Set up inside the front room of someone’s home where they have installed a pizza oven the choice was limited to queso, (cheese)  or queso and jambon, (cheese and ham). We woofed down the latter and it was really yummy, albeit a little on the greasy side. Given the lack of fast food chains in Cuba the “front room” option seems to be the logical alternative to the likes of subway, dominos and starbucks.  Ok, it was time to walk off the fast food.

It was a real shame that the cathedral which read so well in the guide book was closed for renovations and looked like it had been for some time, instead we decided to saunter down a few of the busier back streets. There were plenty of people out and about and plenty of shop fronts, but once we went in for a gander there really wasn’t much inside. One place sold nothing but shampoo and soap, another a  mix of canned foods, clothing and electrical goods which were exhorbently priced, try a toasted sandwich maker for over $200. There were plenty of potential customers but not many seemed to be buying.  The agropecurario (fruit and vegetable market)  on the whole was quite good but the meat section left a bit to be desired having no refrigeration but an abundance of flies. It was an interesting scene to say the least. 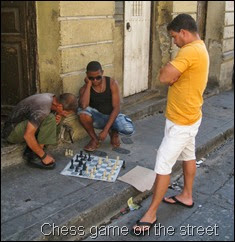 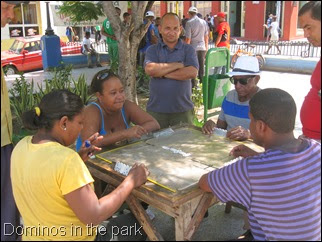 Walking back to our pre-arranged pick up point we passed many folk  playing games of chess and dominos right on the footpath, but it was the queue outside the Etecsa communications shop  that really caught our attention. It stretched down the street and around the corner. There had to be over 50 people standing there in the heat. Cubans are denied access to the internet, no facebook, yahoo, or Gmail, imagine that. They can however send emails via the government controlled intranet system. Foreigners on the other hand are allowed internet  access on fixed terminals, not wi-fi, via most major hotels for a fee of  anywhere between 4 –12 CUC per hour and it’s usually not at the warp speeds we’re used to back home. 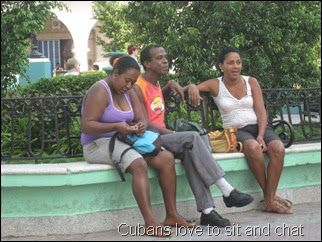 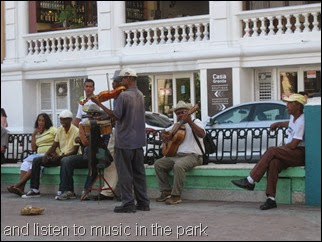 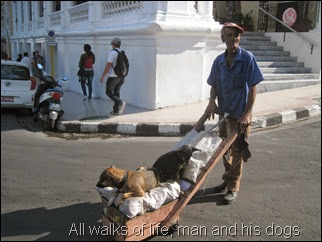 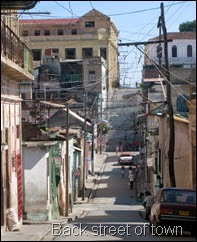 Wanting to sample the culinary delights of Cuban cuisine that evening we dined at one of the local  Paladares. Noel, our taxi driver suggested one close by the marina. It was a small family run restaurant   perched on a hillside, and owned by a guy named Michelangelo. Apparently these type of restaurants can only employ family members who are not paid a wage. They usually provide a better class of meal than the state owned eateries but still have to pay the government a monthly tax which you can bet is a good chunk of their earnings. The sunset view of Santiago harbour with a backdrop of mountains was  absolutely stunning and the food and mojitos were pretty good too. 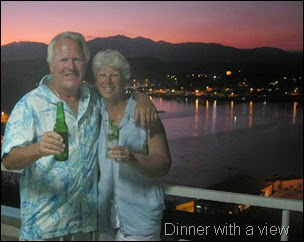 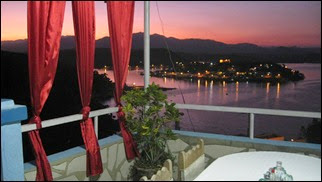 Next morning we headed out early for a morning tour of the lighthouse, where a  lowly 85 watt globe lights the way for mariners and  the fort we’d sailed past at the harbour entrance. Castillo de San Pedro de la Roca del Morro is a Unesco World Heritage Site and has all the usual features of a Spanish fort. Massive batteries, lookout towers and a plethora of cannons.. Built in 1663 and completed in in the early 1700’s it’s original  purpose  was to protect the harbour and city from pirates. Sadly it was completed a little too late to be of use for that, and in the 1800’s was converted into a prison and stayed that way till the 1960’s. Today it’s a museum, as are all the Spanish forts we’ve seen in various countries. Unfortunately there was no signage anywhere in english leaving a lot of guess work on our part as to the use of many of the rooms. 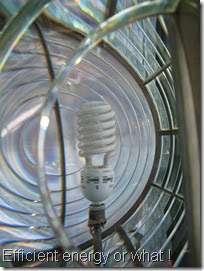 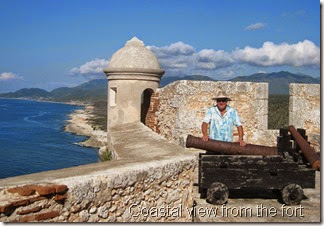 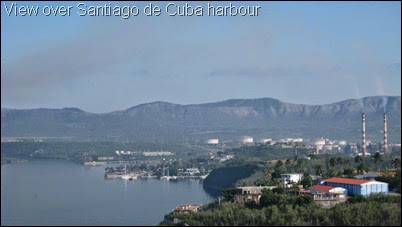 Everyone knows that Cuba is famous for colourful old American cars, Fidel Castro, the missile crisis and fine cigars but there’s  also something else… the music! They have a  rich tradition no doubt emanating from their Spanish heritage. They love to make lots of noise and sing and dance the salsa with unbridled enthusiasm. We were keen to soak up the experience. So we asked Noel, our now-regular taxi driver, to take us into town for a night. We set out at 8pm for the most popular music house in town, the Casa de la Trova, only the show  didn’t commence until 10 pm, bugger! No problemo, he had a back-up in mind and a few minutes later we pulled up outside  Casa de las Tradiciones, another popular night spot where the band was due to kick off in about 30 minutes, that worked for us.

We figured this place was seriously popular as there were dozens of people milling about outside, though we soon discovered they were spectators gathered to witness a few local lads being busted for playing poker, it’s illegal here to gamble for money.  So we joined in the crowd and watched as a few youngish looking men were led from a house, frisked, cuffed and squeezed into the rear seat of the police car, also a Russian Lada (notice there is a trend here with cars) and whisked away for interrogation. We were told they would all serve time for their crime, though not sure for how long. 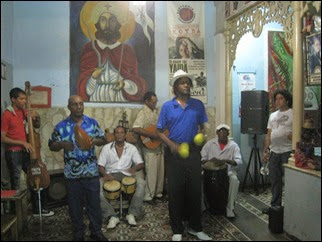 After this short distraction we took our places in the club, a prime table right near the stage, an excellent spot. Following a round of mojitos the band appeared, 7 or 8 of them, and away they went into a robust rendition of their broad repertoire They knew a lot of songs, but to our ears most sounded like the one before. Anyway, the place was pumping, people  were dancing and mojitos flowing. Our friend Pete certainly reveled in the atmosphere, he even paid the 2 CUC cover charge for a couple of sad looking ladies to come in and enjoy the scene. In appreciation of his kind gesture he was soon enticed onto the dance floor by one lovely girl and he fell into step right away. Man can that boy salsa! Would you believe he owned that dance floor for a while? Well, almost, he was pretty good though and it was fun to watch him and the other revelers strut their stuff. When the band took a break  the hat was passed around and we were asked to buy their latest (probably only) CD, or make a donation. We now own yet another terrific CD of local talent to add to our growing worldwide collection. Following a few more mojitos our diver Noel arrived, he had one too and then we headed for home, happy to have had our very first experience of Cuban music and dance, it was a terrific night all round.

An early morning dash to the veg market, paying the marina bill and getting our despacho from the harbour master for our next  main port took up the bulk of our last day. By the time all that was done we had to rethink that nights’ destination. We chose Chivirico only 30 miles further to the west. It involved a reef entrance and a skinny turn into a well protected lagoon so we’d have to get our skates on to get there in good light. Even though we’d only spent three days in Santiago we  felt it was quite enough and were  very glad to be leaving the marina. GWTW was now covered in a yellowish coloured stains courtesy of the fallout from one of the industrial chimneys further down the harbour. 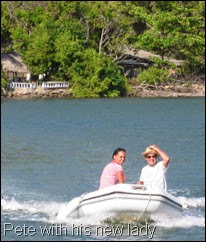 We had the anchor down in Chivirico by 5pm. Loud music was flooding the air from a small waterfront bar so the always eager Pete volunteered to be dinghy captain  for the reconnaissance mission. Maybe it would be good place for a snack and a drink, we were developing a taste for those mojitos. A small crowd gathered on the dock as Pete approached in the dinghy ready to tie up. He never got the chance. The crowd parted and a drop dead  gorgeous, pink clad senorita leapt into the dinghy. Pete was speechless in more ways than one. So being the gentleman that he is  he took the young lady for a spin around the bay before swinging past GWTW to show off his newly acquired friend. We weren’t sure that he’d even come back to get us! After a half hour he returned to the mothership alone, his lady friend gone home. We all ventured back in for a tasty plate of camarones (shrimp) and the boys had a not so great mojito, actually they didn’t know what it was due to a huge language barrier with our waitress despite Pete’s best efforts with his spanish phrase book. 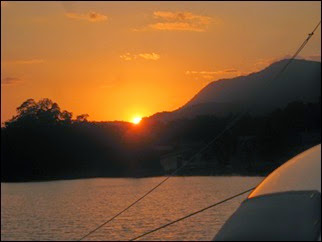 Where to next? We’ll be travelling further along the south coast heading west and stopping at some isolated towns and cays,  so stay tuned.