Continuing westward along the south coast this stretch of the coastline was particularly pretty.The terrain is steep, reaching heights of 1,972m as the lush green mountains of the Sierra Maestra  plummet down to the ocean’s edge.This stunning topography, sans trees of course, continues underwater where depth’s bottom out at 7,680m. The change in elevation from the mountain tops to ocean’s floor is the greatest, in the shortest distance, anywhere on our planet.

Rather than sailing overnight we elected to anchor in the bay of Marea del Portilla, a lovely calm spot surrounded by mangroves on the oceanside and a backdrop of dramatic hills inland.  As we entered the anchorage a couple of fisherman casting their nets gave us a friendly wave and then went back to the task at hand. A few ramshackle homes dotted the waterfront with bathtub sized  fishing boats pulled up on the rocky shore. 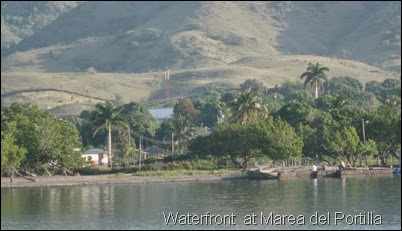 It was a bit of a rural scene with dogs barking, roosters crowing and the odd pig fossicking around under the trees.There wasn’t much of a town from what we could see but  as we weren’t going ashore it didn’t matter. At 9pm, while watching a movie in bed, we heard Spanish voices at the back of our boat. It was pitch dark, very windy and light rain had started to fall.

To our surprise, holding  on to the side of GWTW were two uniformed men and a civilian woman in what can only be described as a very poor excuse for a rowboat, it looked very much homemade, and not by a shipwright. Our unexpected visitors were the Guarda Frontera (coast guard) who had seconded the services of a local home owner. After they politely introduced themselves in broken english they clambered aboard, boots and all, to check our papers. The woman spoke a little english and we asked her where the Guarda had come from as we knew they were no officials stationed in this bay. Her answer was another surprise, they had driven 16 miles from a town further along the coast, knocked on her door and told her to row them out to our boat.They stayed a little more than 10mins, stamped our papers and clambered back into the signoras’ boat, sitting regally in the middle, as she rowed the two burley men into the black night and back to the shore. Talk about service to your country! How did they know we were there? I guess big brother is watching. 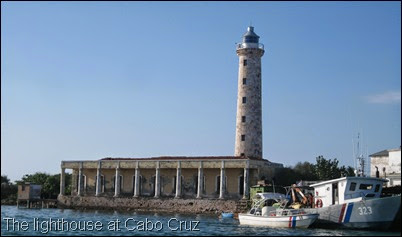 Our next stop 40 miles further on was the isolated town of Cabo Cruz. Literally at the end of the road on this part of the peninsular there was not a tourist bus within cooee. Arriving early afternoon we dropped anchor inside the reef which skirts the cape and it’s lovely lighthouse.  As we ‘d planned on stopping at some uninhabited cays over the coming week this would be the last township for a while. So we piled into our trusty dinghy and ventured ashore to check it out. One of the locals enthusiastically waved us in to a very rickety looking wooden dock, still it did the job and the dinghy was secure. Cabo Cruz seemed pretty quite this Saturday afternoon, maybe that’s how it always is. 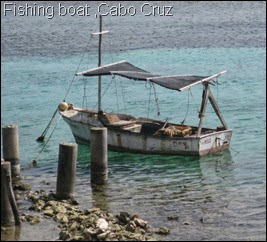 Cubans are quite social  and people of all ages were down on the beach, loud music blearing out from speakers while the wafting smell of BBQ’s filled the air. The sports hounds stayed home, front doors open, watching baseball on TV while others chattered over their front fences. It seemed an easy pace of life in Cabo Cruz. Being the only foreigners walking around we were met with many holas (hellos) and smiling faces. By chance we ran into the local Guarda man, an elderly fellow who was far more interested in shaking our hands and welcoming us to his town than he was in seeing our papers, though he did stress that we should not going into anyone’s house.  We guessed that not many cruising boats stop here let alone come in for a stroll about. He even pointed us to the only restaurant in town so we could enjoy a cervaza (beer) or two. Town was pretty low key. Most homes looked well kept and were painted in pastel colours, paths were swept and lines full of washing flapped in many of the yards. In the main street there was a school, a small children’s park , a clinic and one shop which seemed to sell just about anything and everything. 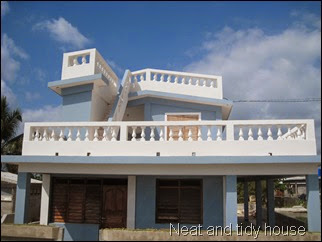 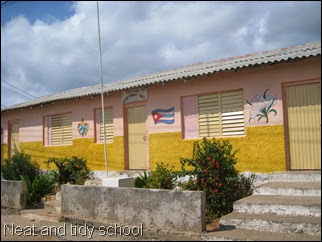 For a place that was so far off the beaten track the waterfront eatery was busy with groups of people dining, drinking and chatting amicably. Pete and Liam downed a thirst quenching Buccanero, while Annie enjoyed a softie, and we all settled on deep fried fish and chips for lunch. After quite a wait, nothing happens fast in a government run restaurant, our meals arrived, a modest sized snapper each and an ample serve of fried banana chips, potatoes are in very short supply in Cuba. While not exactly fine cuisine it hit the spot, as did the bill…total cost  for the three of us 48 Pesos, a little over AUD$2, drinks and all. Clearly, this was not a tourist scene and all dealings were in pesos, the currency of the locals. Had we known in advance we would have spent up big!

Later, as the sun was setting back aboard GWTW, a couple of refreshing sundowners were being enjoyed in the cockpit. But unbeknown to us, we were being stalked by 3 stealthy swimmers. We spotted them a few boat lengths away and soon they were settled on our transom, keen to trade some booty. Cubans we’d been told, can get into all sorts of trouble from the authorities if they are caught on foreign flagged boats, but that didn’t seem to worry these guys. 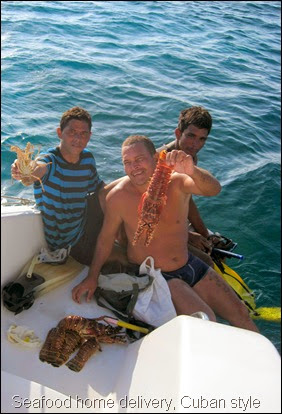 They produced a few good sized fish, some lobsters and vegetables and following much discussion we offered them 10 CUC for the 8 lobsters. A smart polo shirt, a few bars of soap and 3 beers were also thrown in to sweeten the deal. The lads seemed pleased  with this and enjoyed a few rounds of rum  with Liam and Pete. They stayed for nearly an hour and  attempts to make conversation were very difficult when no one spoke anything other than their native tongue. Pete produced his Spanish phrase book and some progress was made, albeit very limited and quit stilted.

It was now getting fairly dark and time, we thought, for them to move on, though they seemed in no hurry. When they did head for home, a lengthy swim of several hundred meters, they left the veggies, offered us the fish and gave us back 5 CUC. We were a bit confused as no one has ever given us back money once a deal has been made. Turned out they simply wanted to have a friendly chat with the people from overseas and make a little money on the side.

Over the next few days we stopped at a few uninspiring mangrove cays. They were all well protected anchorages but with little to keep us there. You can only look at mangroves for so long. Cayo Grenada and Cayo Cuervo were the pick of the bunch, the former having a lovely beach and the ruins of a failed resort on the northern side and the latter a crescent shaped sand spit at one end, a perfect spot for sundowners and a beach fire. 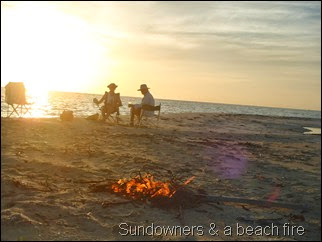 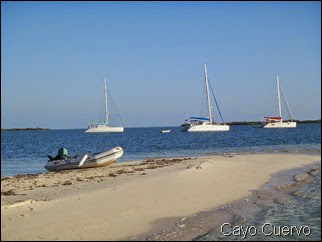 We exchanged a large bottle of Santiago De Cuba 15 yr old premium rum, 4 bars of soap and some old mooring lines for 6 lobsters, 4 plate sized snappers and 1 jumbo snapper at Cayo Grenada, you should have seen the fisherman's’ eyes light up when we gave them the mooring lines. It was like kids at Christmas.  And at  Cayo Cuervo the trade was another bottle of rum, more soap and our crappy old dinghy towel that one of the fisherman really had his eye on, for a half bucket of shrimp and 4 good sized  lobsters. All these fisherman worked on state owned well weathered trawlers. They were extremely friendly and  most appreciative of anything we offered them. 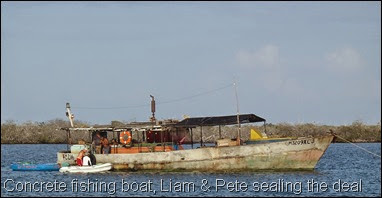 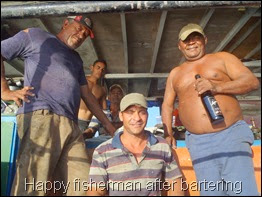 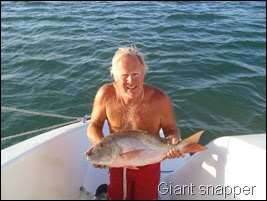 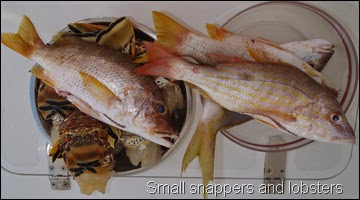 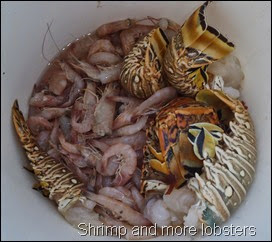 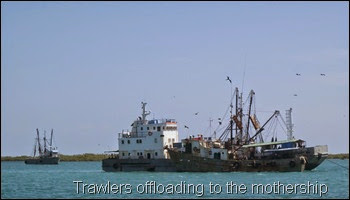 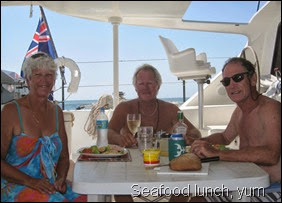 Leaving the cays we made for a reef pass at  Canal Boca Grande where we stopped for a delicious fresh-as-it-gets shrimp, lobster and crusty bread lunch and a swim in the sparkling clear waters, the best we’d seen since leaving Cabo Cruz.

An overnight passage of 100 miles would see us arriving in the city of Cienfuegos with an early morning  birthday celebration for Liam, as he notched up another year. 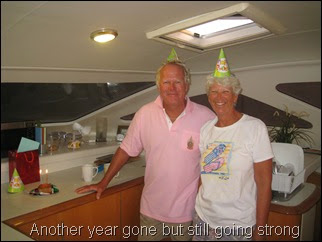 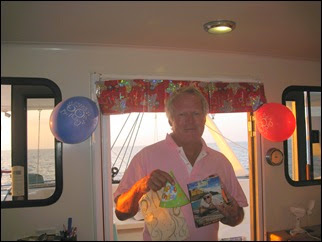