Most of our first day in Cienfuegos was spent getting the lay of the land, celebrating Liam’s birthday with both lunch and dinner ashore and sorting out plans for some up-coming land travel. Having spoken to those who have gone before us, Cienfuegos seemed to be a  good place to leave the boat. It was a landlocked bay with the option of taking a marina berth or leaving GWTW on the anchor, we chose the latter. There is a charge made for anchoring outside the marina  just as there was in Santiago de Cuba, but  at 10cuc per day as opposed to triple that to tie to the concrete marina dock, it was a no-brainer as to which one to take.

We met Candido, an enterprising local guy on our walk into town. He offered his services for taxis, shopping or trips further afield. His name had also popped up in a conversation we’d had with a fellow cruiser the morning we’d arrived,  and came recommended as a reliable fellow to do business with. We decided that we’d take him up on his taxi service for a the 79km ride out to the town of Trinidad  the following day. 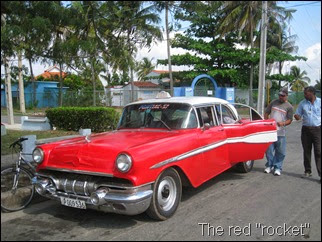 Our wheels for the trip were a red ‘52 Chevy, a real classic. The three of us piled in and  Fangio , not his real name, was off not sparing any of the horses.The last time we’d had a heart stopping drive like this was in a dusty old Merc heading over the Atlas mountains of  Morocco. The springs in the back seat were way past their prime, and with the rear windows up and no handles to wind them down, it wasn’t the most comfortable place to be. But our driver came prepared and soon produced a pair of multigrips and, leaning over the front seat, proceeded to attach the tool to a protruding bolt and wind the windows down. Fresh air flowed through and the comfort factor improved markedly. 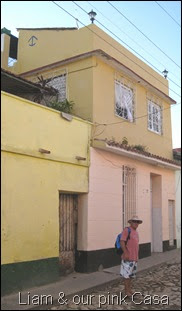 The drive out took us past the sugarcane  fields, over green hills and then along the coast road where there were mile after mile of squashed crabs, road kill of the most bizarre type and the smell  emanating from the hot tar did little for our olfactory nerves. Arriving into Trinidad the next task was to find a place to stay, We’d decided that a Casa Particular was the way to go, the Cuban version of a B & B. Our driver took us to have a look at a couple. They were all very neat and clean but as Pete was with us we needed two rooms so the final  one was the winner. Casa Reina, just down from the bus station  in a quite street, had everything we needed for our 3 night stay. Two comfortable bedrooms with ensuites, and a wonderful roof top terrace  with views over the sea, the mountains and the town itself. It was a real gem just 5 mins walk to the centre of town and all for the princely sum of 24 CUC per night  including breakfast.

Trinidad is a very well preserved Spanish colonial town that was declared a Unesco world heritage site in the late eighties. The town prospered as a result of the fortunes made from the surrounding sugar plantations and mills in the early 19th century.  By the mid century Trinidad was  producing one third of Cuba’s sugar, producing enough wealth to finance the magnificent buildings that give the town it’s character. After settling in to our Casa it was time to start exploring. Our first stop was the Don Pedro cafe for a coffee. A rustic little place set in a leafy courtyard it was just what we needed after the drive from Cienfuegos. Next up we headed over to Plaza Mayor in the centre of the historic part of town which is surrounded by some beautiful buildings and cobblestone streets. 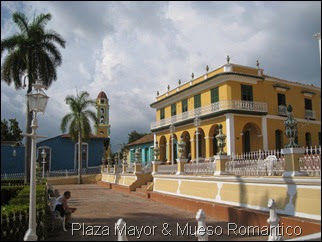 Cars are not allowed to enter but there seemed to be no problem with horse drawn vehicles or tractors.  Just off the plaza we visited the Museo Romantico and the Museo  Historico Municipal. Both  were once owned by  wealthy sugar barons. The interiors were decorated with period furniture from Europe, and china from around the globe. They were really magnificent. 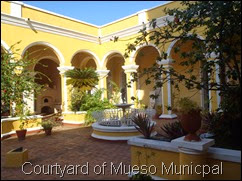 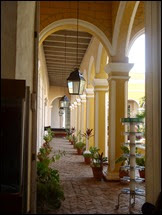 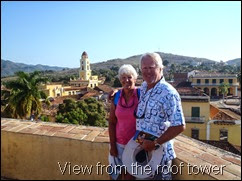 The rest of our afternoon was spent strolling the labyrinth of small streets where there was a “Kodak moment” at nearly every turn. Passing a small bar in one of the back streets we stopped for a mojito or two and were entertained by a group of musicians. They were so good that we bought their CD. Cuban’s sure do know how to sing. 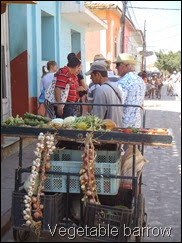 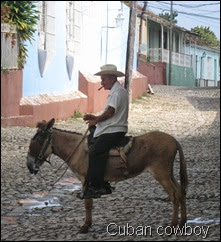 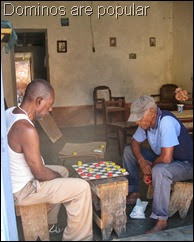 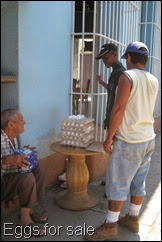 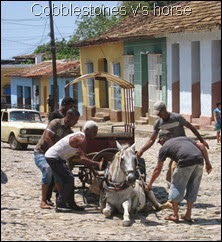 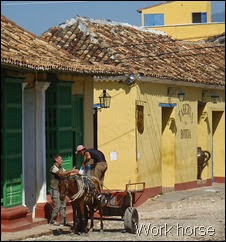 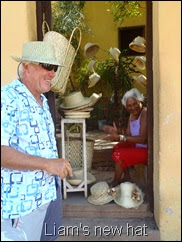 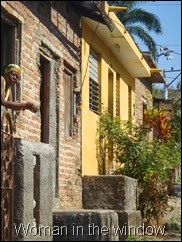 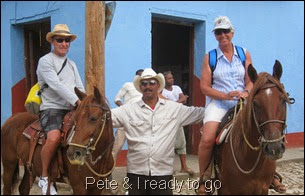 Day two of our stay saw us taking in the rural countryside on horseback. Our steeds didn’t move at a cracking pace, which yours truly was very happy about, but as they plodded along  in the hot sun we had plenty of time to soak up our surroundings and passed many homes that would never make it onto the Unesco list. 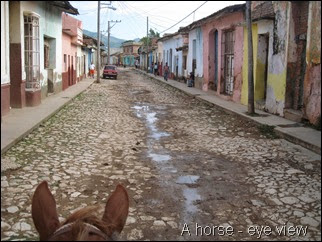 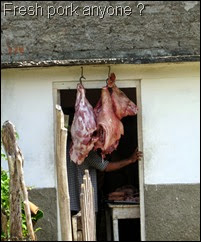 Our destination was the Javira waterfall, about a an hour away our guide told us, though the trip took closer to two.

He had failed to mention that we’d be stopping at an El Ranchon, (rural restaurant) along the way. As it turned out it was a welcome stop for our arses as well as our thirst and we downed a couple of glasses of freshly squeezed sugar cane juice.Then it was on to the waterfall, well water trickle really as there had been no rain for months, but the pond at the bottom was lovely and cool. On the way back the horses certainly knew they were heading home and  they picked up the pace  a notch or two. Even with another stop at the ranchon they got us back in just under an hour. 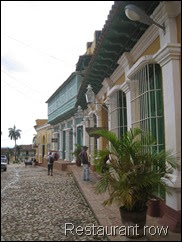 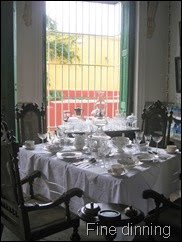 Trinidad, we discovered, has more eating establishments and music venues than any other town of it’s size that we’ve been to. Some of the restaurants were very upmarket and had extraordinary table settings. More silver, glassware  and antique crockery than you can imagine.

Of course we didn’t eat at those ones but we did manage to find a couple of other good ones, one with a pig on a spit which was delicious and another where we had the best lobster pizza ever, way better than the ones I make on the boat. 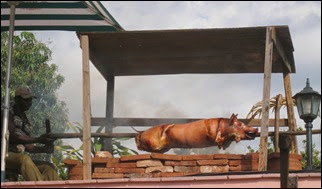 The biggest and best music place was not as we had assumed, in a building, but was actually on the grand staircase next to the cathedral. It kicked off about 9pm and really rocked. Loud music and around a dozen dancers clad in white outfits salsad the night away. It was great to take in the energy and vibrancy of the performers as they worked up a serious sweat going through their routines. 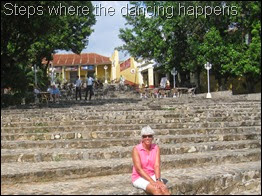 After a couple of busy days in Trinidad we felt we’d seen enough and were ready to head off. Rather than take a taxi we settled on a comfortable Viazul bus to take us back to the boat in Cienfuegos where we’d start making plans for more land travel. This time to Havana, the real heart of Cuba and also  to the rural town of Vinales in the tobacco  growing area west of the capital.