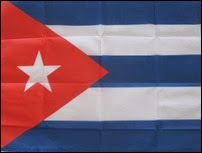 Leaving the Ragged Islands at the bottom of the Bahamas, 280 miles and two nights at sea lay before us. The route to our first Cuban destination, the city of Santiago de Cuba, would take us down the Windward Passage that separates Haiti from the eastern tip of Cuba, followed by a right hand turn along the south coast passing  the infamous Guantanamo Bay, and then a straight line of 100 miles to the entrance of Santiago harbour. 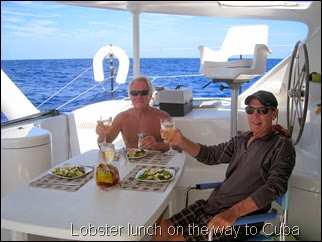 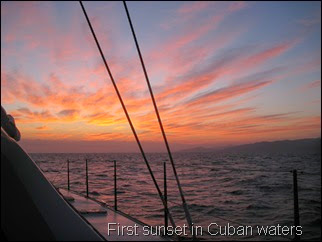 In the 48 hours it took to get there the wind gods threw us a real mixed bag of sailing conditions. We had just about every sail configuration possible. Main with 1 reef and a jib, main only, back to main with 1 reef and the jib, main and motor, full main and screecher, jib only and finally the motor and jib once again.
By mid arvo on day 2 on the distant horizon, the lush green mountains of Cuba came into view. It was a welcome change from the low lying cays and islands of the Bahamas. Steadily they grew larger as we approached the north east coast. 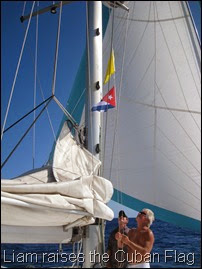 About half way down the Windward Passage strong katabatic wind gusts of 20 knots + swept down from the lofty heights. Not wanting to risk any damage, all sails were dropped and we continued under motor until well into the wee small hours.

Usually when you approach the coastline of most big islands, lights from towns, villages, homes and streetlights are visible from out at sea. From what we could see, or rather not see,  it seemed that Cuba was to be the exception. It was dark, very dark, like someone had forgotten to pay the electricity bill. That was until we neared the US base at Guantanamo Bay. Even from outside the 12 nautical mile exclusion zone it glittered like a Christmas tree. Honestly, you would have thought you were approaching a small city it was so bright. I was able to pick up their very good FM radio station, the US Armed Forces Network, and that kept me company for a few hours along with the odd shooting star and the beautiful sight of our old friend and guiding star, the Southern Cross. 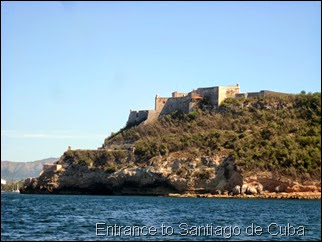 By 10am we were just outside the harbour of Santiago de Cuba. Standing guard on the western headland, as it had done for centuries, was the imposing fort Castillo de San Pedro de la Roca Del Morro. Our guide book said that it was protocol to announce your arrival before entering the harbour so we  tried calling the Guada Fronteras on the VHF radio a few times. On the 4th try a broken Spanish voice replied “ no ingleise lady”, oh well one can only try. The marina staff must have heard us and they  too replied by welcoming us to Cuba, and inviting us to come alongside once we reached the marina.

The harbour looked to be extremely well protected  with hills all around, though the marina docks left a little to be desired. With fenders at the ready we took a deep breath and eased GWTW alongside the rough concrete jetty. The staff were very friendly, polite and professional and had us tied up in no time at all. Norbet, the duty manager, was standing dockside to meet us. He spoke excellent English. shook our hands enthusiastically and once again welcomed us to Cuba. So far so good.

Two other yachts had arrived a little earlier than us so we were now in the queue waiting for our clearance into the country. Norbet had explained that we were not allowed to step ashore until the medical doctor had paid us a visit which really didn’t bother us as we were pretty tired. He also repeated several times that we should relax and be patient. The officials will come, just be patient he said. So until someone knocked on the hull, sleep was going to be a definite option. 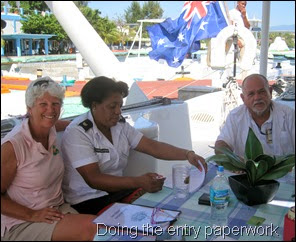 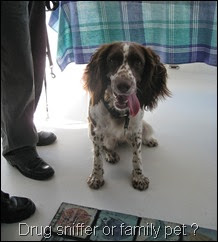 After a couple of hours the incredibly friendly doctor and the immigration officer arrived and did their part of the paperwork. The immigration lady wore a very short black skirt, red witches britches and the thickest black fishnet stockings we’d seen for a long, long time. Clearly we were not up to speed with Cuban fashion so it seemed. With  both the health and immigration boxes ticked we could now get off the boat but were not allowed to leave the marina.  Another two hours passed before customs and the drug / explosives sniffer dog boarded us and did their bit but we still couldn’t go anywhere outside the marina until our tourist cards, which were our visas, arrived from the airport. The cards were  eventually delivered about 4 pm. It had been a long day of waiting and unknowingly we had just completed our first lesson of “Nothing happens fast in Cuba”.

By now we couldn’t be bothered venturing into town, so for a change of scenery we adjourned to the marina balcony which overlooked the bay and sipped a chilled glass of Italian Prosecco as what remained of the day slipped away. 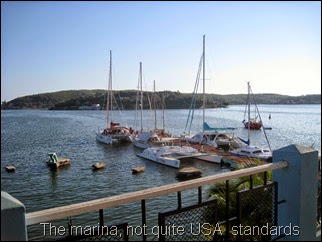 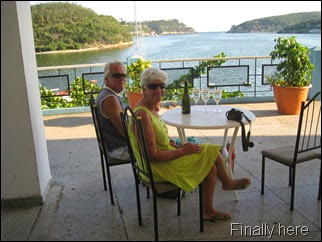 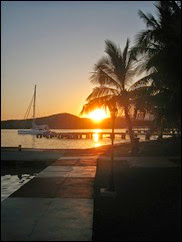