Back to work we go

Our BA flight from London back to Trinidad was excellent. It took about 10hrs with a brief stop at the island of St Lucia.

Most of the time we spent surmising as to the sort of state GWTW would be in and the huge jigsaw that lay ahead of us to put all the deck fittings back on. My sister and niece would be arriving in just over 2 weeks and the plan was to be ready to launch back into the water a few days later. Then we’d head up island and show them what cruising the Caribbean is all about. Yep, that was our plan. Little did we know that the odds for an on-time departure were totally stacked against us.

Stepping off the plane in Trini the heat nearly bowled us over, totally forgetting how intense the humidity was. Before we left the boat back in July we’d booked a room at Power Boats again for our return as we knew it would be a hard slog putting the boat back together. 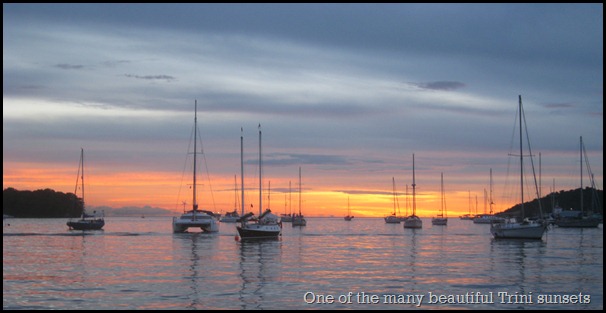 We figured that within two weeks everything would be sorted and we would be ready to go. Ha! Well the two weeks stretched out to four as we worked like drovers dogs. There just weren’t enough hours in the day to do everything that had to be done. Most mornings we were over at the boat by 7am, returning to our room around 7pm. It was totally exhausting, draining work and every night we were absolutely stuffed. Our launch date was scheduled for November 20th but as that date grew closer it became increasingly apparent that we’d have to put it back. 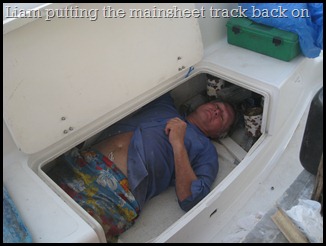 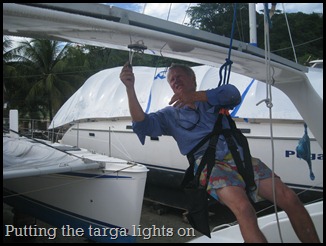 The deck painting wasn’t finished when we left Trini in July and on our return we weren’t very impressed with some of the workmanship. Quite a lot of it had to be redone. Also, below the waterline, we found gouges in the fiberglass that were the result of an overly zealous man with his sander. These too had to be redone. When my sister and niece arrived on the 16th we told them about the delay and this was met with mixed emotions. They didn’t quite understand the enormity of what we had accomplished  before they’d arrived or what still had to be done before we could go back into the water and start cruising again. In fairness to them though we had given them a date we’d be leaving and they had timed their arrival so they could enjoy a few days of sightseeing  around the island before we left. But as anyone who lives on a boat knows, lady luck is not always on your side and you just have to roll with the punches.

We kept our visitors happy as best we could but it was hard. Apart from a couple of organised  tours, trips to the pool and the mall they were pretty much left to their own devices as both of us continued working on the boat. 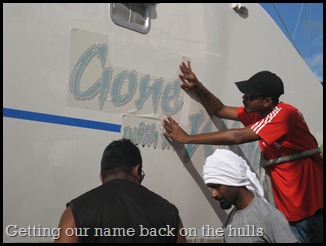 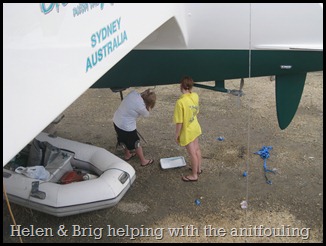 Finally, our new launch date rolled around. GWTW looked picture perfect with her shinny new paint job, new boom cover and matching sun strips on the jib and screecher. We felt like proud parents, well very tired ones to say the least.

All went well until we hit the water and then fate delt it’s trump card. Still with the slings under our hulls, both our stern glands on the propeller shafts began to leak. Over the months that we’d been on the hard stand the rubber seals had dried out and cracked, something that you don’t know has happened until you are put back in the water. It was a steady drip and one that could not be ignored. We were hauled straight back out again, our morale sinking to an all time low. We started to think we would never be able to leave. 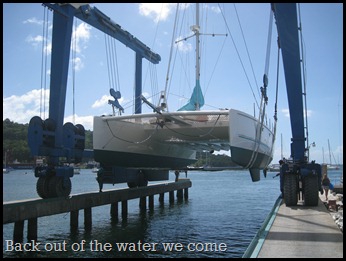 The replacement parts had to be flown in from the USA and  combined with the installation, saw us land-bound for yet another week.

A new launch date was set, this was to be our third one, and when that day came we were definitely a tad nervous.The launch went as smooth as a baby’s bum and we were so relieved. 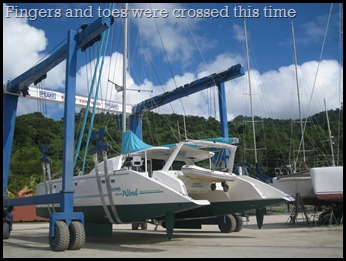 There were still had a few jobs to finish off but we figured we could do them up island as we went along.

Our cruising season had finally began.