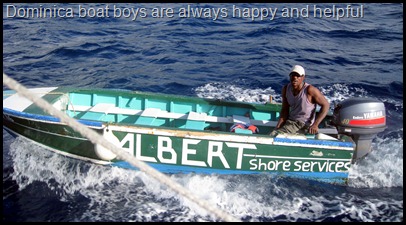 From Martinique we sailed to the lush Island of Dominica.This was just an overnight stop for us in the bay of Portsmouth and next morning we continued north to the Islands of Isle de Saints on the south side of Guadeloupe.

We have stopped at The Saints  group on previous occasions and really like them. Liam and I went to a very funky café for lunch while my sister and niece had a walk around town and checked out the shops. 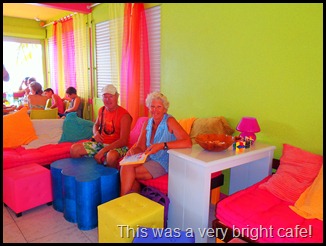 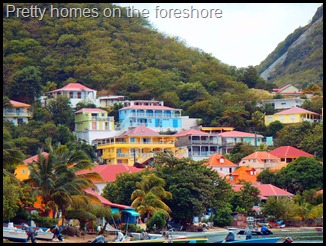 As with all the French Islands, and the same in France, many business close between 2 & 4 pm for their siesta. Not a bad tradition if you ask me. Nothing like having an afternoon snooze to revitalize the system. The bay had changed slightly since our last visit and there seemed to be more mooring balls installed. Rather than anchoring we picked up a ball, something we rarely do. The cost was only 12 euros for the night, not bad really given the water was 62ft deep.The town is very pretty with brightly coloured houses and interesting wall murals. 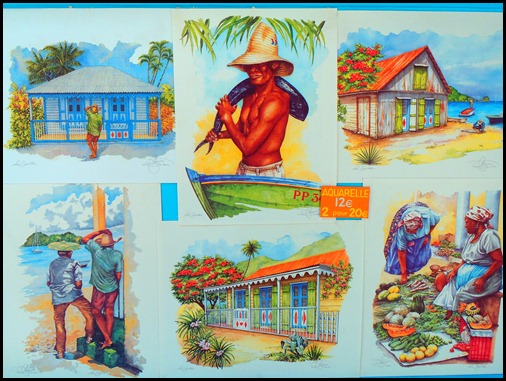 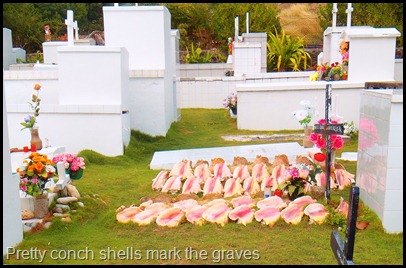 Even the local cemetery was brightened up with plastic flowers and colourful conch shells adorning some of the graves .By nine the following morning, after a quick run to the patisserie for baguettes and other French delicacies, we were on the road again.

This time we had a run of 22miles with 15 knots out of the ENE and a small chop on the waves. Once we got behind the Island of Guadeloupe just to the north, it was flat water and fast sailing to the town of Deshaies at the northern end of the island. Once the anchor was down and set the girls were in the dinghy and ready to explore this two street town, which didn’t take long.

There are a few restaurants, a patisserie and a couple of supermarkets and a gift shop and that’s about it. Although we never seem to arrive in the anchorage at the right time of day, apparently an enterprising guy trudels around the anchorage in his dinghy about 4pm taking orders for baguettes and croissants, which he delivers fresh and hot to your transom at 7 am the following morning.What a great service! 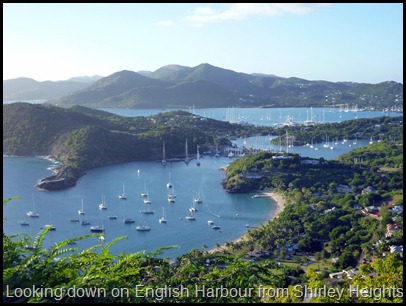 Antigua was our next objective and we were staying there three nights, one of which would see the new year in. English Harbour was the place to be and we found a snug spot up in the front row in a depth of 11ft. Being Sunday afternoon the big attraction is the Shirley Heights bbq and Steel Pan Band experience.

This was a must see for our visitors. So along with the crew of Sundancer 2 we piled into a taxi and headed up the hill to enjoy the music, bbq and watch the sun set over English harbour and  the distant island of Montserrat. Perfect. 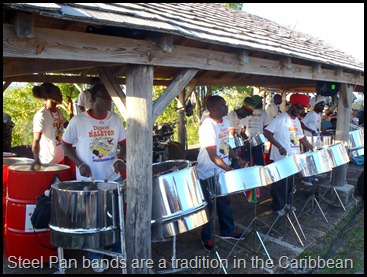 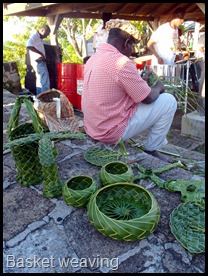 We saw the New year in on the lawns of Nelson’s Dockyard in English Harbour along with the Sundancer 2  and had a great night.  A DJ belted out tunes through loud speakers, rum was the drink of choice, party animals danced the night away and fireworks lit the skies. For good or for bad 2013 had arrived. 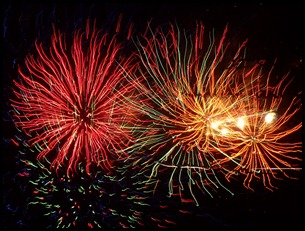 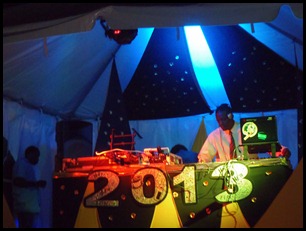 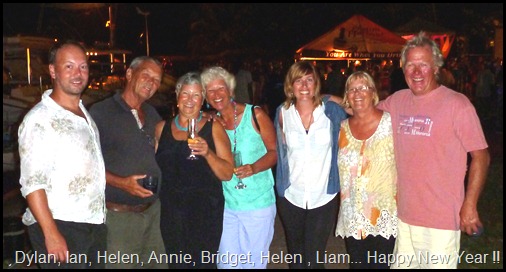