Europe on a shoestring? not quite

Our travel time from Bournemouth to Gatwick airport was about three hours so we clambered into Liam’s cousin, Malcolm's, car at around 6am and hit the motorway going north. The traffic was heavy and an accident about halfway there caused a bit of a hiccup in our timing. Arriving at the airport we still thought that we’d have plenty of time to spare but  lady luck had other ideas. The Easy Jet check-in was chockers with happy and some not so happy holiday makers. It made for slow going and to top it off our departure gate was at the furthest possible point in the terminal. Still, all’s well that ends well, and  after a good aerobic workout we settled into our seats for the flight across to Rome. Europeans are so lucky, pretty much everything is only an hour or two’s plane ride away. So different to Australia where usually the first stop is eight or nine hours unless, of course, you’re going to New Zealand. 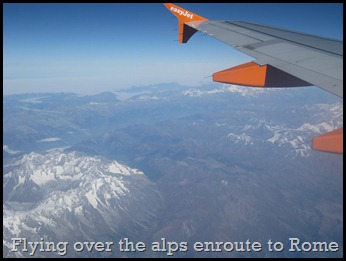 This was our first experience with the low cost carrier and I must say their cabin staff and service were really good. Knowing that Rome is a year round tourist destination weeks earlier we’d booked our accommodation at the B&B Rome River Inn, and sometimes it’s the luck of the draw when you do this over the internet. As it turned out it was an excellent choice located in an area called the Centro Storico with all the major sights within walking distance. Being a family run business staffed by the owners three daughters, they’d organised a hire car to pick us up at the airport. It was so nice to be met by a smiling driver in a foreign country. Kinda takes the stress out of everything. 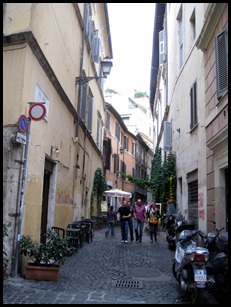 Now you might be wondering why we were going to Rome as we had already spent a few years on GWTW in the Mediterranean and had done Italy while we were there. Truth is there were just so many wonderful places in Italy to see that we ran out of time, but promised ourselves that one day we’d go back . So there you have it.

Allowing five days to see the sights, on our first evening we strolled the streets nearby just to get our bearings and soak up the feel of the place. Evenings in Italy and especially Rome are intoxicating.The only word that describes it is vibrant. Everyone is out and about. Families, lovers  tourists and there are heaps of  buskers and street vendors nearly everywhere you turn. 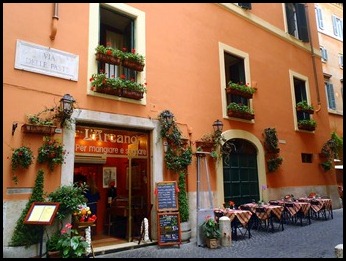 Meandering away from the main drag down a quite lane well off the tourist track, we found a small little pizzeria with outdoor seating and the obligatory red and white checked tablecloths. It was perfect. Just the spot  for a bite to eat, a glass of chilled Proscecco and watch the world go by before hitting the hay for the night.

The following morning we were up early and pounding the pavements to the Colosseum. We bought a Roma pass which amongst other things  allowed us to jump the massive queues of people waiting to get in. It’s an impressive building to say the least. 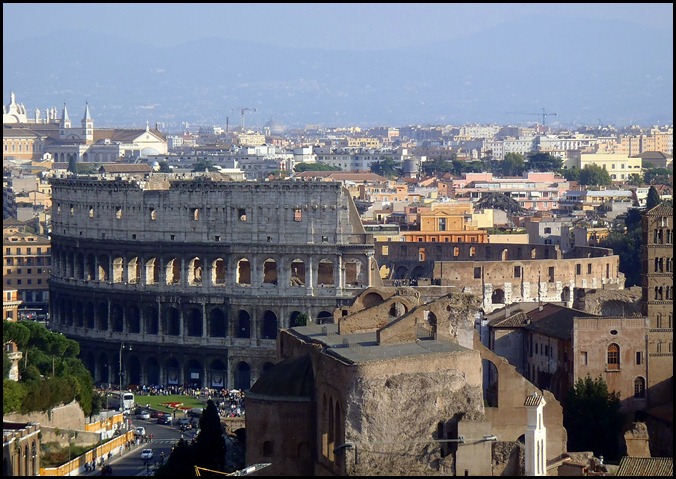 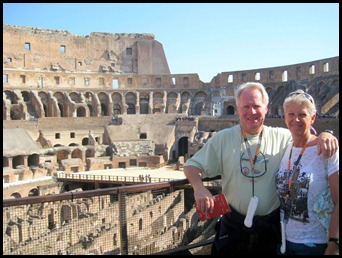 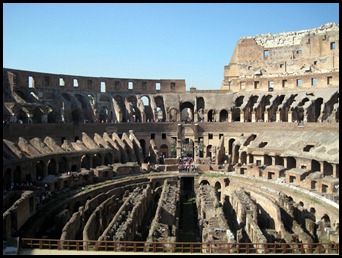 With over 2000 years of history standing in front of us, once inside we hired an audio guide which gave a better insight into what was what. Looking down into the tunnels which led around and under what  once was the arena, it was easy to imagine the gladiators fighting for their lives against the lions and the crowd on their feet cheering them on, or maybe they were rooting for the lions !

Leaving the Colosseum behind we mooched across the road to the Palatine and the Roman Forum. The former, set on top of a hill with magnificent views over the city, is where the most affluent citizens of Rome set up home. It’s also where Romulus killed his brother Remus and founded Rome back in 753 BC.There are a few ruins still standing but mostly it’s like a huge parkland in the middle of a very busy city.The Forum, in it’s day, was the heart and soul of the city. Large covered markets were the focus of the place as well as being  the civic and religious centre of town. From here we briefly stopped at the war memorial building, took the elevator to the roof top and had a good look at the sprawling city that surrounded us. Then it was to the trendy Campo de’ Fiori which is a very colourful produce, floral and general market during daylight hours. It is then hosed down and swept out in the late afternoon and transformed into a noisy bar and restaurant  and scene. 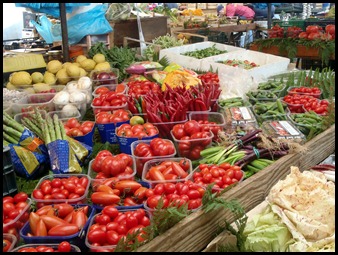 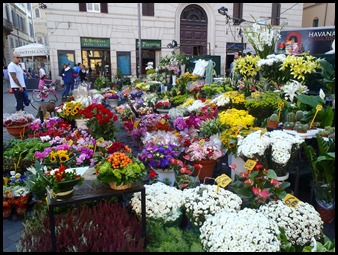 We joined the revelers for a sundowner and then, weary footed, headed back to the hotel for the night.

By the end of our second day we’d walked almost one end of the city to the other. Starting with the Piazza Navonna, which was yet another lovely restaurant square overlooked by pretty apartments brimming with flower boxes. 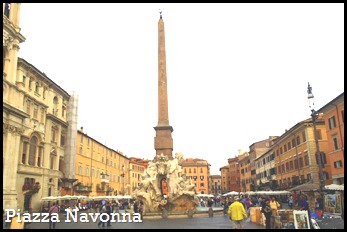 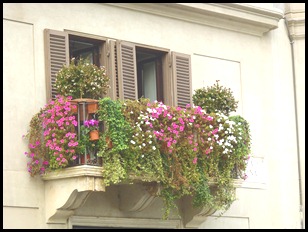 The central feature here was a rather elaborate fountain, “Fontana dei Quattro Fiumi”,  meaning fountain of the four rivers, featuring a palm tree, lion, horse and obelisk. We thought it was a bit dorky really but hey, when in Rome. Next stop was the Pantheon. It’s enormous dome was the largest in the world until the 15th century. The dome is the same width as the the building’s internal height of 43 metres. Now that’s a big dome by anyone’s standards. From here we toddled along to the Trevi Fountain and threw in a couple of coins. Legend says if you do this you will one day return to Rome. 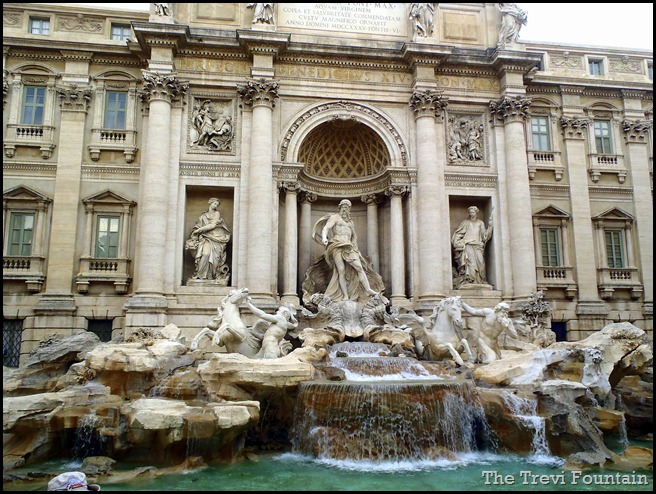 The water in the fountain comes from one of the city’s ancient viaducts and the sculptures depict Neptune’s chariot being led by Tritons with sea horses, one wild and the other docile. It is symbolic of the moods of the sea and believe me we know all about that one ! 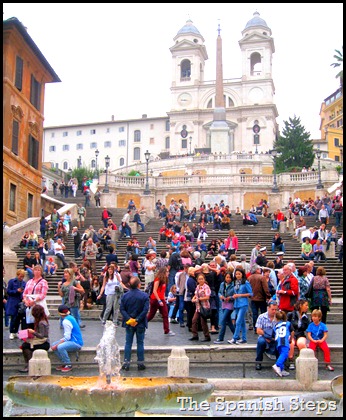 Next up were The Spanish Steps and apart from being steep with lots of people sitting, standing or gawking at them, the whole thing was a bit lost on us. At the bottom of the steps the roads pan out to the ritzy area of town.This is where the likes of Hermes, Cartier, Prada etc, along with those who can afford to shop in these establishments, can be seen perusing the shop fronts. As for us, well we just kept walking, no point stopping to look. We had one more place to visit before our day was done and that was the “over the top”  Villa Borghese. Once owned by the opulent Borghese family, the estate, started by  the Cardinal of the same name has now been turned into public parklands and a museum.The place is brimming with artworks and sculptures from around the world and the market value of these pieces would have to be worth billions. No photos were allowed inside so you’ll just have to Google it, though there is no way that the internet could do it justice. And who said there’s no money in religion!

Over the next couple of days we really did see how much money there is in religion, especially the Catholic religion. Vatican City, the world’s smallest sovereign state covering less than 1sq km of ground, is the centre of the universe when it comes to Rome. It has the really big ticket items, meaning the Vatican Museums,the Sistine Chapel, St Peters Basilica and of course it’s home to the Pope when he is in town. Vatican city even has it’s own  post office, stamps, postcode, radio station, currency and army which is separate from the rest of Rome. 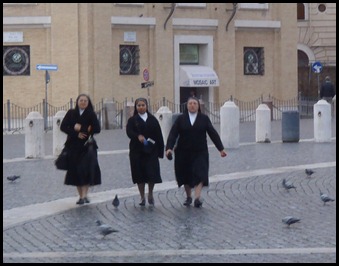 It is definitely the focal point for the clergy from around the world. You only have to take a look at all those flowing black robes scurrying through St Peter’s Square and the surrounding streets at any given moment in time.

We had planned to visit the Basilica first but when we got there at 8am there was already a huge lineup of people waiting to get in so with a change of plan we headed up the hill to the Vatican Museums instead. There was still a fair queue but as we’d booked on line we were fast tracked to the front.

The museum, which houses an unbelievably opulent collection of artworks, frescos and sculptures, having been snapped up worldwide over hundreds of years, actually comprises of two palaces joined by long hallways. 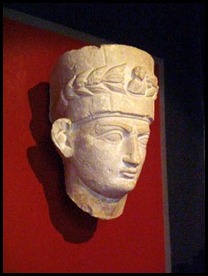 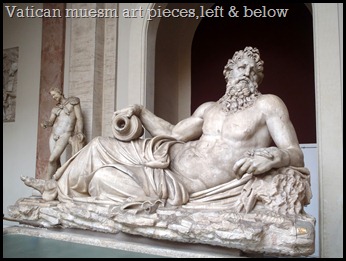 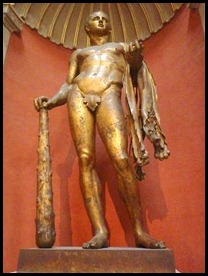 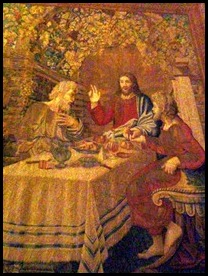 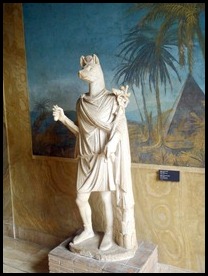 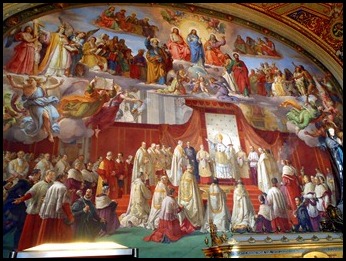 But the grand prize for being shuffled along like cattle and loosing all your personal space for hours on end is the Sistine Chapel. This is really what everyone has come to see. Disappointingly it wasn’t at all  what we’d expected. As there was no stand alone stone building, or anything that resembled a front door, we were inside the chapel before we even realized. In fact the chapel was just a big room with an alter at one end. The lighting was extremely dim and the “minders” kept telling everyone to hush and move along, so the time spent in there was quite limited. Michelangelo's paintings were indeed spectacular. How he laid on his back way up above the chapel floor for all those years was an incredible feat of patience and endurance to say the least. Photos were not allowed but I did get manage to snap off two. 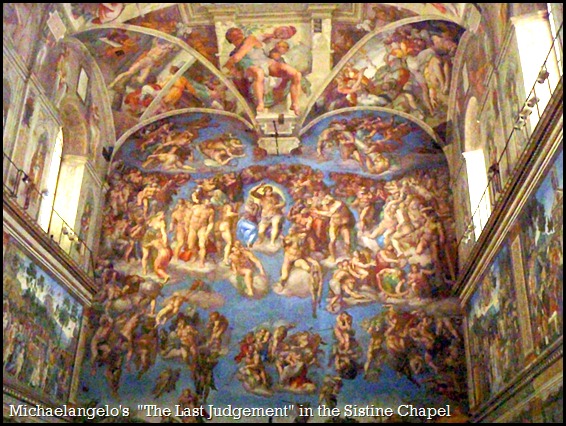 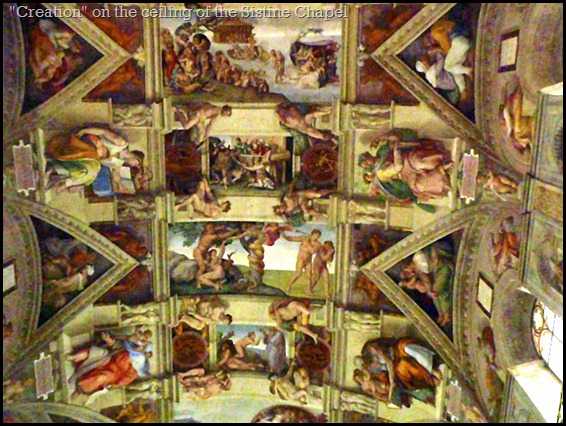 By the time we’d finished here we were pretty much art-worked out. Now there was just one more place left to see, St Peter’s Basilica. Think of the longest queue that you’ve stood in and then triple it. That was what greeted us when we arrived back in St Peter’s square. Thousands of people stood there in a line that snaked it’s way around in front of the most important church in the Catholic religion. 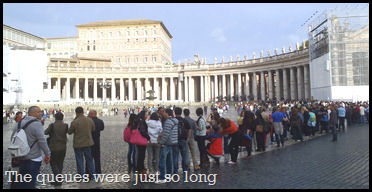 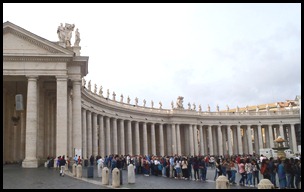 The afternoon was getting on and with no more patience left in us we decided to call it a day, get up early and come back the next morning.