Christmas in the Bahamas: Does it get better than this?

It was December 23rd and the weather was sparkling, but lacking any sort of  breeze for the 55 mile crossing of the Gulf Stream from West Palm Beach to the Indian Cay channel, on the north-western tip of the Bahamas. Motoring was the order of the day, and while we would have preferred to be sailing, crossing this stretch of the Atlantic can be heavy going at times, so we were quite happy just plodding along on nice flat seas. And in keeping with foreign protocol once we were outside US territorial waters, we lowered the USA courtesy flag and raised the Bahamian one. 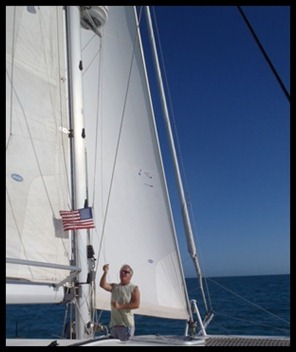 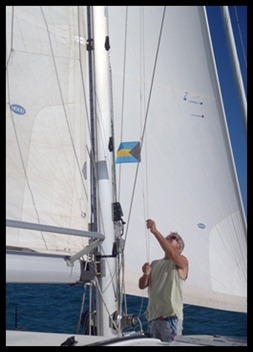 Our two fishing lines trolled merrily along behind GWTW and about half way across Liam heard the familiar “ping” of the line, and  we reeled in a good size Mahi Mahi, no guesses for what was on the menu for dinner that night! 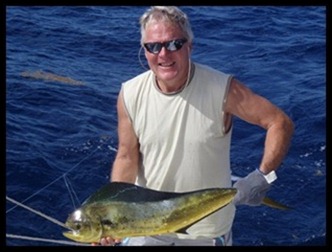 As we approached the channel, black clouds ahead heralded a large squall that gave us a good wash down of the decks and strong winds. Our final 20 miles were bumpy and rolly, and we closed the Bahamas coastline as a moonless night fell. As is often the case we just needed one more hour of daylight to get to our destination. Rather than stopping at the opening of the channel we decided to push on and anchor for the night on the Bahama Banks, but that was still  8 miles away via a narrow, winding channel, and it was a seriously black night. There were no lights or navigation beacons marking the channel, so we relied heavily on our charts, depth sounder and ipad to navigate our way through, dropping anchor at 7pm on the calm  banks in about 10 feet of water. It was a great feeling to be back in the Bahamas. 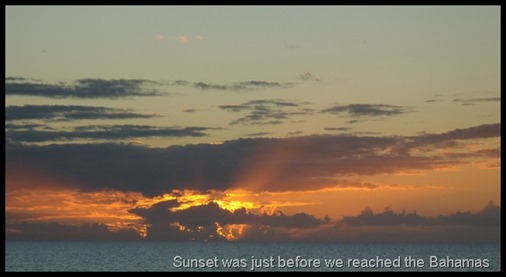 The next day, Christmas Eve, saw us motoring another 45 miles across the banks to Great Sale Cay. This uninhabited cay (island) has a large bay and  is a convenient anchorage for those enroute to the Abocos chain of islands, as we were, further  to the east. Once again we anchored in shallow water, 9 feet, along with 6 other boats that were heading our way. It was here that  we started to remember from our northbound  passage earlier in the year that the waters in the Bahamas are shallow, and as time progressed we became accustomed (well almost) to sailing along in clear water with depths of 15 feet or less, sometimes a lot less.
Christmas day dawned sunny and clear, and surrounded by turquoise water we started the day off right with  a quick swim and a chilled glass of champers and orange, followed by the obligatory opening of the presents. 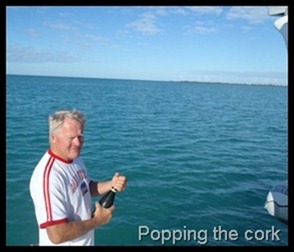 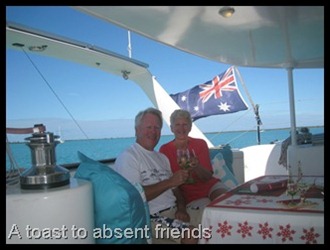 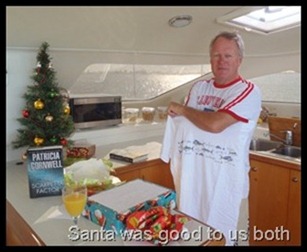 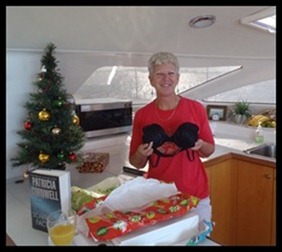 Last Christmas we were at sea, somewhere in the middle of the Atlantic Ocean heading for Barbados, so a year on it was great to be anchored safely with nice surroundings. Annie produced her usual stunning Christmas fare, roast chicken, crispy potatoes and the whole nine yards including pudding and ice cream. 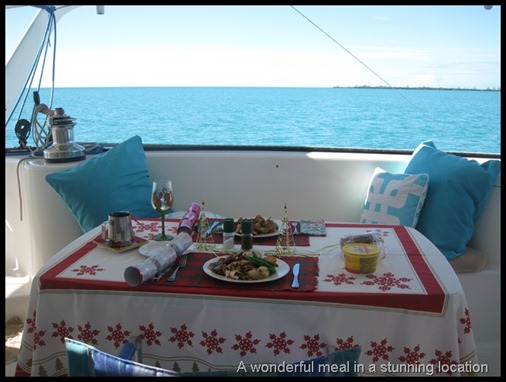 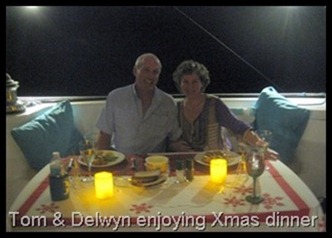 Feeling the need to share the Christmas spirit, later in the day Liam hopped in the dinghy and invited a Canadian couple, Tom and Delwyn from the neigbouring boat Mahalo, over for a sundowner. As the evening  progressed it transpired that they hadn’t as yet had any Christmas fare, and we couldn’t have them go hungry, so out came our leftover chicken and a whole new batch of roast veg. The night was a lot of fun culminating in the four of us singing badly while Liam attempted his usual guitar routine. Our melodic tones probably sounded  pretty crazy to the rest of the anchorage but hey, it was Christmas after all.