ABACOS ISLANDS: Tanning our toes in the Abacos
A New Year and New Adventures.

Marsh Harbour on Great Abaco Cay is  the biggest town in the entire Abaco chain and it’s the only town that has a traffic light!. Good provisioning  is available here as well as a couple of marinas for those so inclined, but as is the norm with us we prefer to anchor. While we were here we bumped into our  English friends Robby and Jenny off Maymio, and had a terrific evening on their boat with their friends who had flown in from the UK for a couple of weeks. From Marsh we had a good  six mile sail over to Hope Town on Elbow cay, a cute  little town with pastel coloured houses and a cosy harbour, it had  a very quaint laid-back  feel to it. 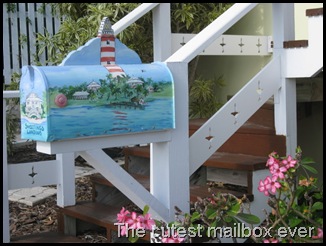 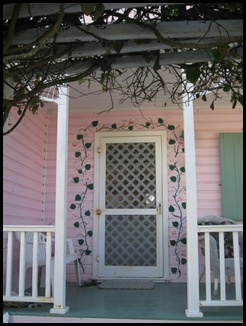 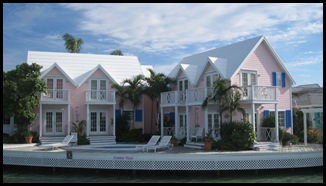 A feature of this little place was the abundance of artists there, we would often see them, brushes in hand, standing behind their easels and focusing on recreating a particular element of life in Hope Town. The red and white candy striped lighthouse was definitely the most prominent and highest landmark in Hope Town. Open to the public, it was something of a nice reminder of days gone by, the engineering goes back to the 1800’s and the light is actually generated by fuel from high-pressure kerosene tanks, the lighthouse keeper starts it up each evening and turns the light off just after dawn. The view from the top was brilliant, the balcony area taking in the harbour as well as beautiful surrounding stretches of water. 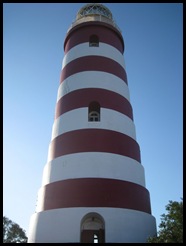 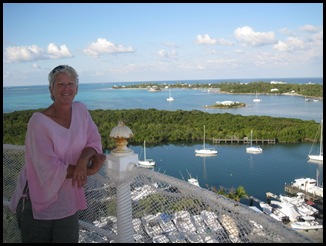 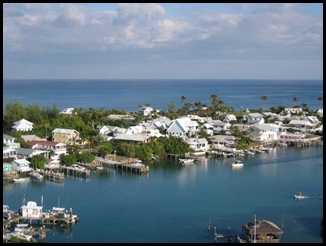 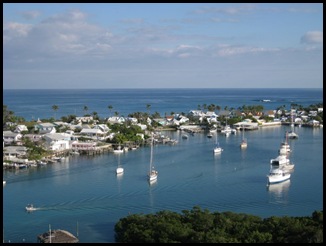 Hope Town also had a couple of good restaurants and we enjoyed some excellent food and drinks right on the harbour’s edge. 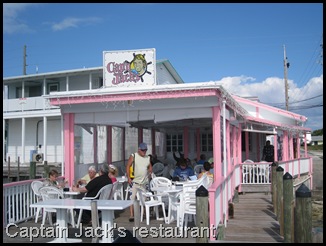 We liked the place so much that after leaving to spend  a few days in a nearby anchorage further down  the cay, we  returned to the harbour for a couple of extra days. The Hope Town Sailing Club were hosting their first race of the season while we were there, and were encouraging any  visiting boats to join in the fun out on the course. As old racers at heart we couldn’t refuse the invitation to enter. 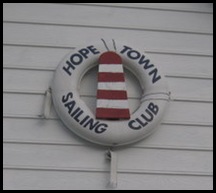 The race was run over a windward/leeward course of about 20 miles with the star of the fleet being a traditional Bahamian sloop, the Abaco Rage, around 35 feet long, with a  massive boom and 14 crew aboard, mostly for ballast. It made a spectacular sight powering along in the 12-15 knot breeze, the crew sitting to windward on planks of wood that slid from one side of the boat to the other. Sadly, the main halyard let go and they were forced to retire, after dumping a number of their crew in the drink, that is. 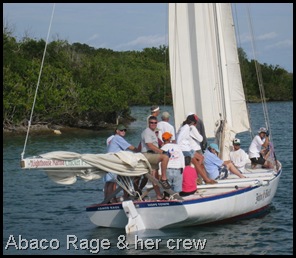 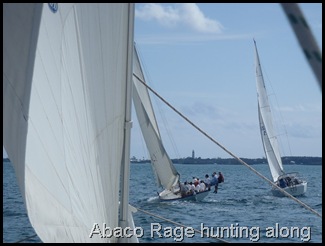 How did we perform? The word  “modest” comes to mind. With Annie steering and Liam pulling the strings things were going fine, until the line that ensures the jib sheets (ropes) don’t foul on the mast when tacking decided to  let go. Needless to say, each tack now became a real task as the sheet would catch on  the mast fittings and take some time and effort to sort out. But we kept at it. Approaching  the bottom mark, tearing along at 12-15 knots we actually moved up to second place, only a boat length behind the leader, and then the screecher sheet fouled and we were forced to miss the mark and tidy up the mess. By the time we had our house in order the leaders were gone, and the upwind beat turned into a tough slog as the wind piped up to around 20 knots. With a good deal of relief we crossed the finish line in 3rd place, it was doubtful Liam had another tack in him, he was completely exhausted from all the winching. Sometimes it’s just so hard to get good crew! Meanwhile back at the Sailing Club, a comfortable building about the size of a 2 car garage with an adjoining courtyard area,  we were made very welcome and enjoyed the nibbles and presentation and many a chat with the locals, they were an exceptionally friendly bunch and invited us back anytime we were in the vicinity. 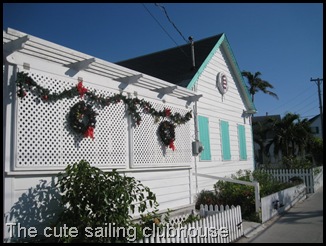 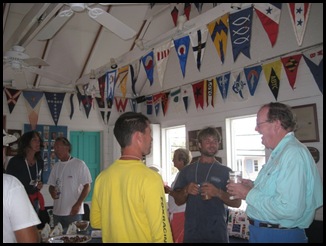 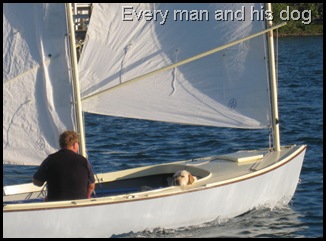 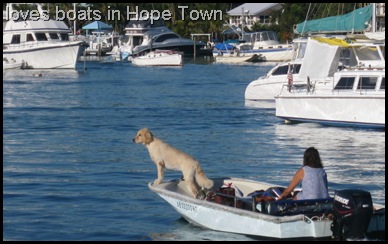 The next morning we left Hope Town and moved down the cay to a small sand spit named Tahiti beach. It was fairly isolated area, just a couple of docks and a few houses, and a perfect sand spit that we deemed ideal for a beach bon-fire. Firewood was plentiful and we soaked up a great sunset while sipping some cool sundowners and stoking the fire, not a bad way to wind up the day, what do you reckon? 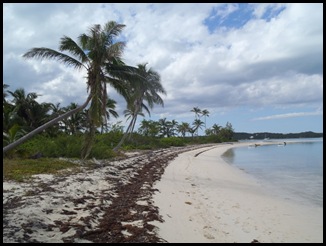 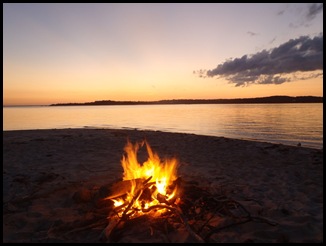 By now we were close to the bottom of the Abaco chain, with only Little Harbour and  a beach-side restaurant named Pete’s Pub left to visit. We had a nice sail down and picked up a mooring  ball in Little Harbour, it was getting breezy and the anchorage provided good protection from the building swell. The entrance was very shallow, depths of less than 6 feet were regular and with our depth sounder alarm squealing we pondered our chances of leaving the harbour at mid-tide the following day. Pete’s Pub was a very laid back place, sand between your toes, a minimal menu but ok food and pleasant surroundings. There is really not much there, they have a gallery that specialises in bronze sculptures, very intricate and not cheap, one elaborate sculpture sported a  prize tag of $120,000! 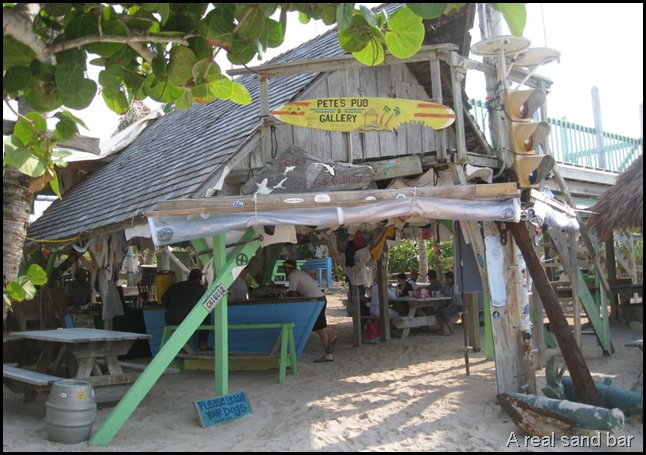 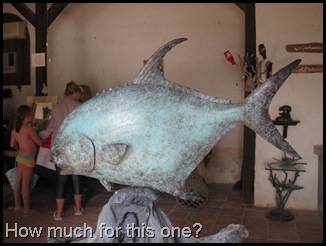 The following day we departed  the Abacos. We had enjoyed around 3 weeks in these waters and really loved it, there are just so many interesting places to visit and the locals and cruising folk always made us feel right at home. Around 10am on January 15th we slipped our mooring lines and gingerly motored out of Little Harbour, it was mid-tide and with over 50 miles to run we were anxious to get going. With the sounder hovering around 5 feet (we draw 4.5 feet) GWTW made a painfully slow exit into deeper water, and a short time later hoisted sail and headed south towards the island of Eleuthera.
****************************************************** 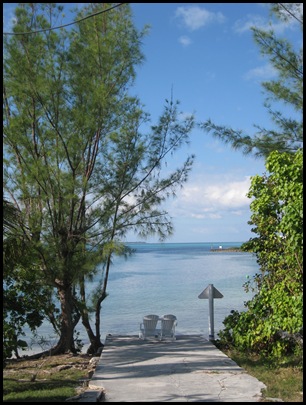 CRUISING NOTES: Formalities.Check -in to the Abacos can be made at Green Turtle Cay Marina, Spanish Cay Marina Treasure Cay ,Walker’s Cay or Marsh Harbour. Cost is US$300  if boat length is over 35ft or US$150 if under. Visa time limit depends on the officer but the max we have heard of is 180 days.Supermarkets: Maxwells in Marsh Harbour is the biggest. My advice is to stock up well before you get to anywhere in the Bahamas as everything is a little more $$$ than the USA. Fuel : Most marinas have fuel but it is around US$6  per gallon so fill up your tanks before you get there.
Posted by Gone With The Wind .... on safari on Saturday, February 18, 2012