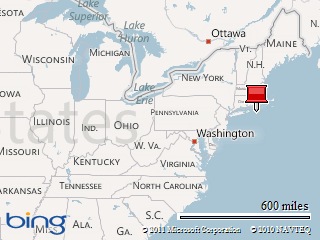 After a great run with the screecher from Block Island, duelling with Remi De along the way, we arrived into the very busy bay of Newport, Rhode Island. Newport is the legendary and former home of the “Auld Mug”, the “Americas Cup”. And fittingly, as we sailed up the bay sporting our Boxing Kangaroo flag, we were welcomed by the magnificent sight of a squadron of elegant retired old ladies, several 12 metre racing yachts, criss-crossing our path as we headed toward our anchorage in Brenton Cove. Turning into the bay, the scene ahead of us was dominated by a field of mooring balls, as is the way in many of the more popular east coast ports. Still, we managed to find a spot big enough that worked just fine. 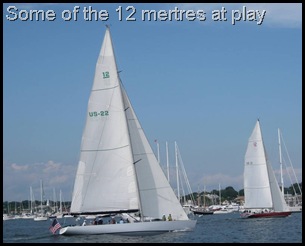 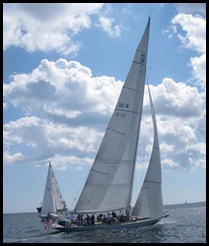 Along the way to the anchorage we once again gazed, somewhat gob smacked, at the size and number of massive summer homes. Some of these places occupy land that would cover a small golf course, and there are simply dozens of them around these parts. Clearly, Newport is a desired address for many well-to-do Americans.
Amongst our priorities on arrival was getting our 15 hp outboard back into action, it had died in Block Island, cause unknown, and being without the family car makes our life somewhat tough. Luckily, there was a local outfit prepared to come and collect the motor, fix it, and return it the same day, sounded pretty damn good to us. So, after Bruce from Remi De towed us in to the nearest dock, we handed over the Mercury 15 to the local experts (???) and off we trekked  to explore downtown Newport. The visitors centre seemed like a  a good place to start so, along with friends from Wings, Deb and Terry, we decided to take  a tour of one of the many mansions. Hopping onto one of the local sightseeing trolley buses and armed with cameras and maps,  we headed off to the the house that was previously the home to the fabulously wealthy Vanderbilt  family. 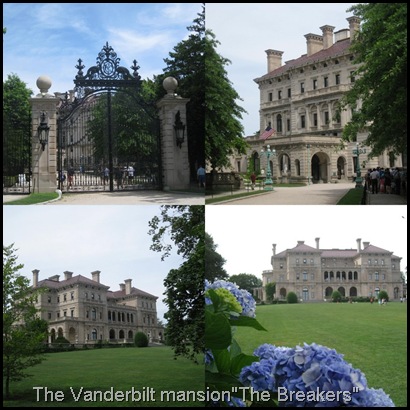 We have been very impressed by the wealth and the vastness of properties all along the east coast but none such as those in Newport, and the Vanderbilt’s “The Breakers”, perched on the cliffs overlooking the sea was an outstanding example. Open to the public for a modest fee, as are many such mansions, the tour inside and around the grounds was somewhat surreal…it is so BIG and LAVISH, but don’t just take our word for it, Google it and see for yourself.  Unfortunately no photographs were allowed inside. Cornelius Vanderbilt, like many of his neighbors, had far too much money, and, aided by European experts, created what we considered  was a way-over-the-top “summer cottage”. The detail, craftsmanship and quality are unsurpassed, and I guess it was chic in it’s day. But really…do you need 70 rooms, 40 odd servants and running salt and fresh hot water? Still, it was impressive, and well worth a visit.
Later that afternoon, true to his word, Randy (yep, that was his name) delivered our outboard back  and sure enough, it started first go…excellent. And it went brilliantly for around 200 yards, and  then coughed and died, just as we approached  the stern of GWTW…bugger!  A quick  phone call back to Randy and he agreed to come by next morning, his diagnosis – crap in the fuel system related to the ethanol in  domestic USA gasoline. Solution – replace the fuel tank, the fuel lines and toss out any unused fuel. Liam did this with the exception of the tank, which he cleaned out thoroughly, and the squeeze fuel primer (a  big mistake we later discovered) and, using some of Randy’s tips, Liam soon became proficient at pulling down the carby, cleaning it and putting it back together. Randy, an expert, charged us $250 for 2 1/2 hours work, whereas our GWTW in house Mr Fix-it did it first time in less than 2 hours, and at no cost, and got progressively quicker each time thereafter, maybe Liam  should consider a new vocation in outboard mechanics. 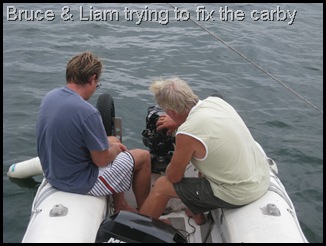 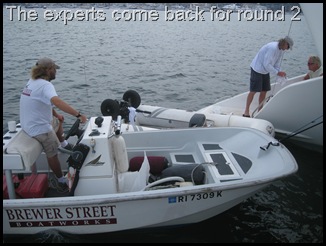 Over the next few days along with Remi De and friends from another cat, Daydreamer, we did lots of walking, probably about 5 miles in total. Strolling along the well beaten cliff top pathway we enjoyed seeing a few more of the mansions and chatted with a couple of locals along the way. 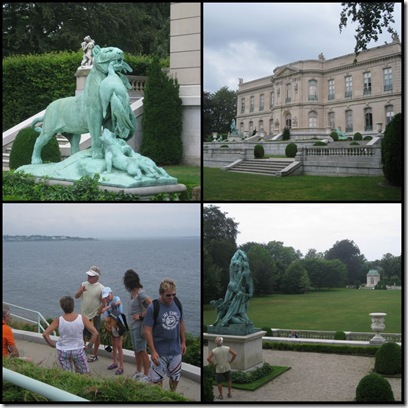 We worked up quite an appetite  and following the recommendation of some fellow walkers headed back to town to the Fastnet Irish pub, which proved to be a great lunch venue where hearty food and cold drinks went down a treat after a couple of hours of sightseeing. Rounding off our big day out we ogled at the expansive lawns and buildings of the Newport annex of the New York Yacht Club, and soaked up as much of the nautical history of the place our time would allow, it was pretty cool really for those of us interested in sailing
Evenings  in town were very vibrant, lots of busy cafes serving a variety of foods, with seafood a definite  favorite on most of the menus. Getting to the restaurants was a  challenge though, the dingy dock in the town centre was rather small and generally chocker. 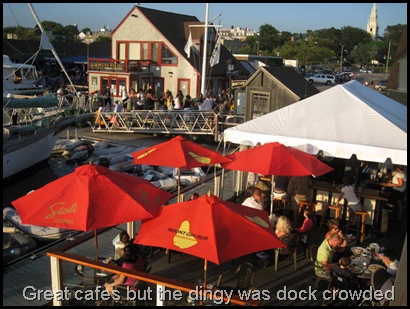 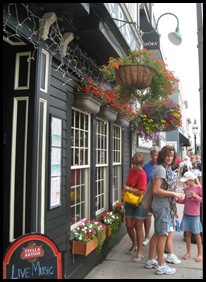 You needed to be pretty agile to  clamber over  the other dinghies to get to the dock, not too bad on the way in, but it was a little more challenging on the way back, especially after a bit of  socializing with friends. We had a good time one afternoon at the Black Pearl restaurant on the waterfront, great clam chowder, friendly welcoming people and an easy spot to sit and  people-watch as the tourists boarded the old schooners for their sunset cruises on the bay. Newport, like many other places where we’ve stopped, continued the “Welcome to America” feel we have enjoyed now since Fort Lauderdale. We are often asked where we are from, do we need assistance, and are  always encouraged to “have a good one”! We like it, it’s a nice touch that is certainly lacking in a lot of the  other countries that we’ve been.
While Newport is something of a sailing Mecca, there are also dozens of power superyachts…boats over 100 feet long and usually much larger.They adorn the docks and must bring heaps of money to the local economy. A few large sail yachts were here too, but they were seriously out numbered by their motored cousins. Still, there was something for everyone  who were interested in taking a leisurely walk  along the foreshore and gawking at whatever was tied alongside. Naturally, as in any tourist hot spot, there were any number of shops happy to sell you T-shirts, tea towels,nick nacks etc, it’s definitely  not a problem finding a memento of the place before you depart.
Our next stop is Provincetown on Cape Cod, a place with something of a colourful reputation, and it promises to be very different from “traditional” Newport. So it’s “goodbye” to elegant yachting attire and hello to “anything goes”…should be fun!
########################
Cruising Info: Formalities: Call CBP on arrival on 207 532 2906. Supermarkets: A small convenience store is on Thames St along the waterfront or a large Stop and Shop about a half mile walk up hill to Bellevue Ave. The trolley bus from the visitors centre stops at the stop and shop as well. Local Attractions: The Herreshoff Museum, The Museum of Yachting, The Tennis Hall of Fame and the Wooden Boat Building Yard are all within a short distance of the anchorage. Other: West Marine and Wall-Mart about 2 miles away on the bus, check at the visitors centre.      Laundry: Machines and dryers are available  at the Seaman’s  Church Institute.
Posted by Gone With The Wind .... on safari on Tuesday, November 01, 2011