MAINE : where it’s all about the Lobsters 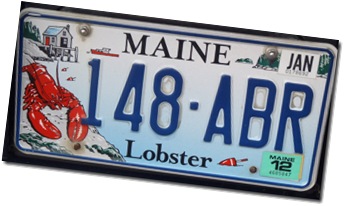 Heading north from Provincetown on Cape Cod we were pretty alert to the fact that we were about to sail through an area known as the Stellwagen Bank National Marine Sanctuary, and  share the road with some of the world’s largest mammals. This area is the summer feeding grounds of  the North Atlantic Right Whale and the world’s most endangered species, the Humpback Whale. At this time of year there a lots of these magnificent creatures out there going about their business, so getting up close and personal, although it can be a little bit nerve wracking, is definitely not a problem. As we crossed the banks with a following breeze and our kite flying,  we could hear the haunting sound of their calls and saw about half a dozen of these big fellas, some just cruising along the surface and some breaching. And these guys are huge. We looked like a toy boat in a bathtub compared to them, one flick of their monstrous tails and it would have been hasta luego for us. It was a truly awesome sight. 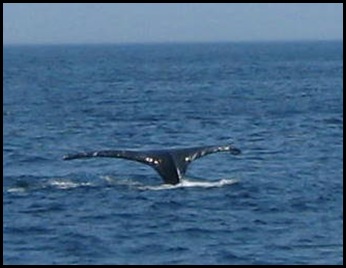 Leaving our friends the whales behind, it was time to get on with some serious sailing. At just over 140miles ‘till our next landfall we wanted to cover a lot of ground  before the wind swung around to the northeast  as was predicted. With flat seas and a steady wind just off our port quarter we slipped along nicely under a full main and kite until nightfall when we doused the kite and set the jib. We have a “no kite at night” policy on GWTW and it works  extremely well for this half of the crew. In the early hours of the morning the wind died completely and then clocked around to the northeast, bringing with it a heavy dose of fog as well as some very cold temperatures. 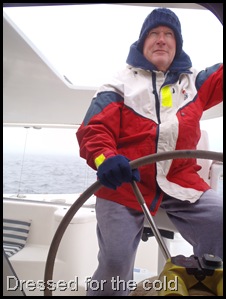 Visibility was down to about 100ft so on went our radar and out came our fog horn. Conditions stayed liked that ‘till 10am when slowly the fog started to lift and we caught our first glimpses of Maine. As we motored up Penobscot Bay we were welcomed by a few dolphins, some ever so cute seals, and for as far as the eye could see a carpet of colourful lobster pots. We watched with curiosity as  lobstermen busied themselves pulling in their traps and marvelled at the  numerous pine clad rocky outcrops, or ledges as they are called up here, that dotted the shoreline. After sailing 1500 miles from Fort Lauderdale, we had  finally arrived in magnificent Maine. 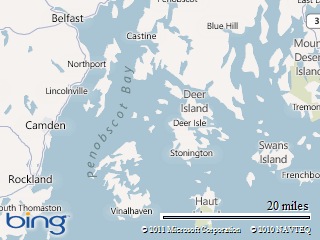 The sailing season up here is relatively short with the best time being  July to mid September. After then the weather starts to get really cold, the fog rolls in and basically this part of Maine just packs up and goes home for the winter. Having spent many hours poring over guide books and magazine articles on where to start, end and generally cruise whilst in Maine, we decided to make a bee-line north and concentrate most of our time in and around the northern area of Maine between Penobscot Bay and Mt Desert Island, as we could take in the sights of southern Maine on our trip back down. The Penobscot region is said to have some of the best cruising grounds in Maine and it certainly did not disappoint. Stretching  between  latitudes 43.59N and 44.59N, there are literally hundreds of quiet bays and small fishing villages where you can choose between chilling out on the boat or exploring ashore. We did our fair share of both.

Our first port of call was a charming  historic village named Camden. It is a picture postcard type town with friendly people, an interesting assortment of shops, restaurants and backdrop of pine clad hills. As our first introduction to Maine it was just perfect. 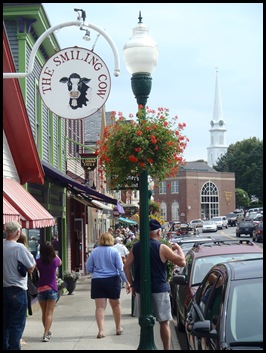 The shipping and shipbuilding industries made Camden prosperous before the civil war and then in the 1880’s the wealthy from Boston, New York and Washington discovered the area as the perfect place to escape the intense summer heat and began building their beautiful summer homes here. One hundred years later Camden was named one of ten best places to retire. Today this little town where the mountains meet the sea has adopted the slogan “Maine, the way life should be”, and it suits this whole area down to a tee. The weekends see lots of tourists flock in, but despite that we spent a couple of days here soaking up the feel of the place and we enjoyed meeting a few of the very friendly locals and partaking in the odd bowl of clam chowder at one of the waterfront taverns. Then it was  time to head down to Rockland, where the festival that we’d sailed all the way from Florida for was about to get underway. Before we arrived up here we pretty much thought of Maine as being full of nice towns, which it is, pine trees everywhere, which there are and lots of rugged shorelines. What we didn’t realise was just how big the lobster industry was. Annie had read months ago about the Rockland Lobster Festival on the internet and thought it could be fun. As it turns out it is THE biggest event on the festival calendar of Maine all year, and come hell or high water we weren’t about to miss it. 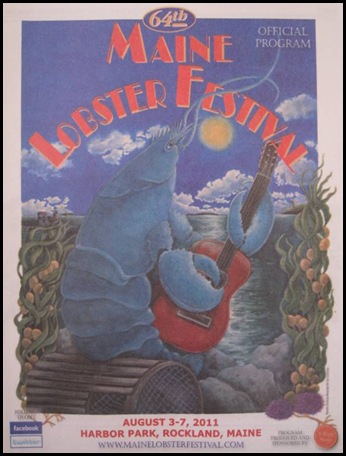 Pulling into the harbour at Rockland the scene was impressive, there were well  over one hundred yachts anchored in the bay, the most we’d seen for a long time. The Navy had brought up one of their destroyers from Norfolk for public tours during the festival, and a ferris wheel towered over the entertainment stage and the harbour-front park. The local radio station regularly announced what would be happening on shore during  the festival  so we had a good idea of what to expect. Even though the day was a bit overcast, we were all set to have a good time. Heading ashore around lunchtime, it didn’t take us long to find the big white lobster tent. Really, you just had to follow your nose, literally, as the  distinctive smell of cooking lobsters wafted through the air. 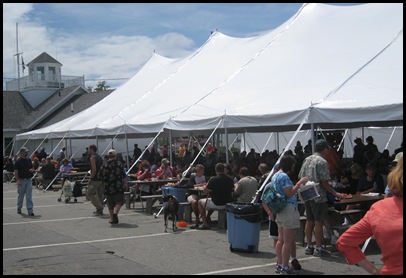 There was quite a big lineup but the queue moved at a good pace and it wasn’t  before long before we sat down with  dozens of other happy lobster eaters eager to tuck into our first Maine lobster. It was a rather messy but tasty affair and after a while and three lobsters later, we definitely were in the swing, eating lobbies like a pro. 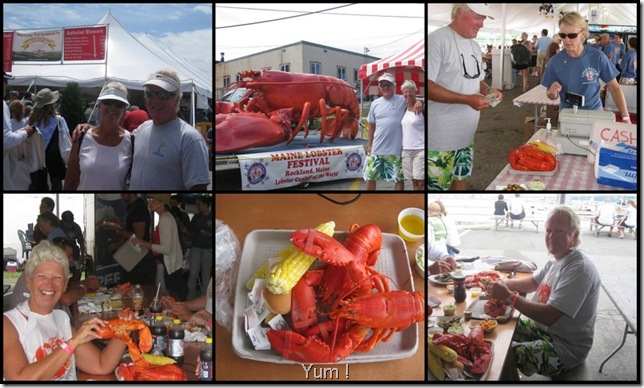 While we were wrestling with these big red crustations a film crew arrived on the scene. They were looking for a novel story for the Boston evening news. 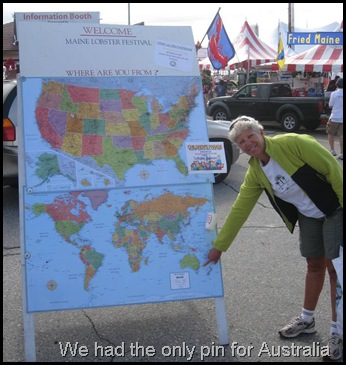 Hearing our non American accents they came over to interview us and were most astounded as to where we were from, how we’d got to Maine and how on earth we knew to be in Rockland this particular weekend. Well as they say, the rest is history. Our brief interview  aired on the telly that night with Liam’s suggestion for next year’s festival a true show stealer. Click on this link below to see our 40 seconds of fame  but you have to watch the lobster news clip all the way to the end : http://www.necn.com/08/04/11/Rockland-Lobster-Festival-kicks-off/landing_newengland.html?blockID=546078&feedID=4206&

our 40seconds of fame

Feeling as full as a goog we took a stroll through the rest of the festival grounds. It was a mixture of fair grounds, craft stalls, exhibitions and eating stands. A fun filled atmosphere where lobsters were the dominant theme, there were lobster xmas ornaments, lobster tea-towels, lobster jewellery, lobster soft toys, lobster patterned dog collars and so the list went on. The state of Maine is for sure lobster-centric. 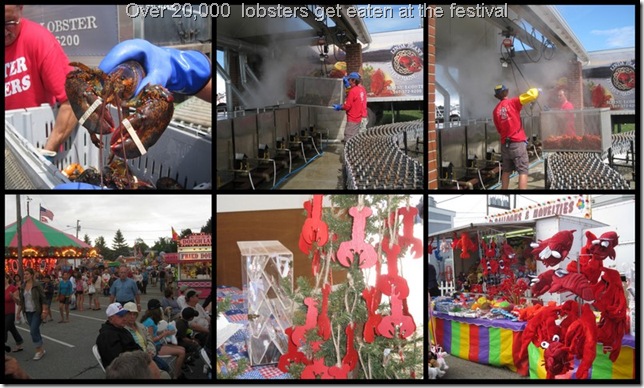 Later that evening dressed for cold and damp weather, we returned to listen to a concert put on by the Jimmy Buffet Revival Band. All the parrot heads, that’s what they call the J B fans who dress up in Hawaiian shirts etc, were there dressed up to the nines in their Jimmy Buffet attire. As the show went on some of the crowd took to the dance floor and even those seated, like us, bopped along to all the familiar tunes. 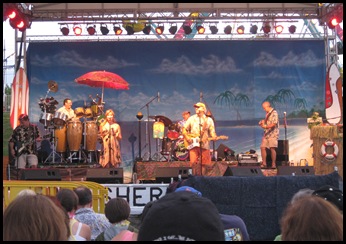 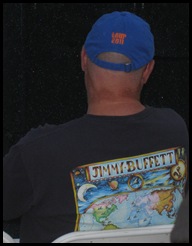 After a while the rain came tumbling down but the band played on and  the crowd stayed, we were all having way too much of a good time.B y the time we got back to GWTW we were pretty well soaked through, but boy had we had a great time, and yes I'd sail all the way back up there to do it all again. The following morning we headed back into the festival again but this time it was to join in the fun at the “all you can eat pancake breakfast”. 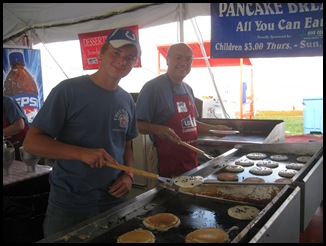 Wow, what a great way it was to start the day. Piping hot blueberry pancakes, maple syrup, fresh juice and coffee.These folk sure know how to feed the patrons, no wonder the festival draws such a crowd each year. Inspired by our first taste of lobster we decided to give cooking them ourselves a go. So off we trotted to the lobster store and bought a couple of big ones. There are two types of lobsters up here, hard shell and soft shell or shedders as they are called. The soft ones are sweeter but the hards have alot more meat, just have harder shells to crack. With some good instructions from the lady in the shop on how long to steam them we tried our hand at it for dinner.. the results were mouthwatering. Liam did a great job cooking them up, and from that moment on we were hooked and would be helping support the lobster industry in Maine for as long as we stayed. 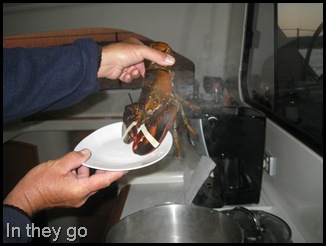 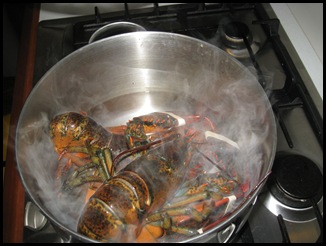 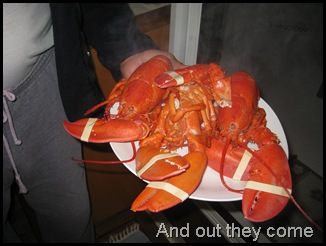 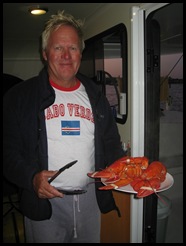 Cruising Info : Formalities: While in Maine call CBP in on  # 207 532 2131 each time you change anchorages, NB the AT&T network is patchy in some parts of Maine. Supermarkets: Camden : French & Brown grocery on cnr of Main & Elm St. Rockland: Shaw’s supermarket is about 30mins walk out of town on Camden Street. Fuel: The Landings marina $3.89 per gal if buying over 100g (very good price) Lobsters : from any lobster pound, prices vary for hard or soft shelled lobbies.