We spent just over five weeks in Maine and visited many delightful towns and bays, far too many to go into great detail about so, to keep it simple, I’ll just be writing about some of our highlights.

Leaving Rockland and the lobster festival behind it was time to go out and explore the many islands and sheltered coves of Penobscot Bay and those further to the north. It was a foggy morning, a real pea souper, as  we sailed across the main channel towards the Fox Island thoroughfare.The silence of our gloomy surrounds was only being  broken by the rhythmical sounds of a fog horn, warning of a close-by navigation buoy, ledge or headland. Our AIS, automatic identification system, and radar were invaluable as it tracked both fast and slow moving vessels nearby, sometimes as little as  a few hundred feet away. The thump of their engines the only give-away of their existence as they passed close by us. It was quite unnerving for we novices of fog, but fog or no fog, life on the water in Maine just seems to go on as normal. 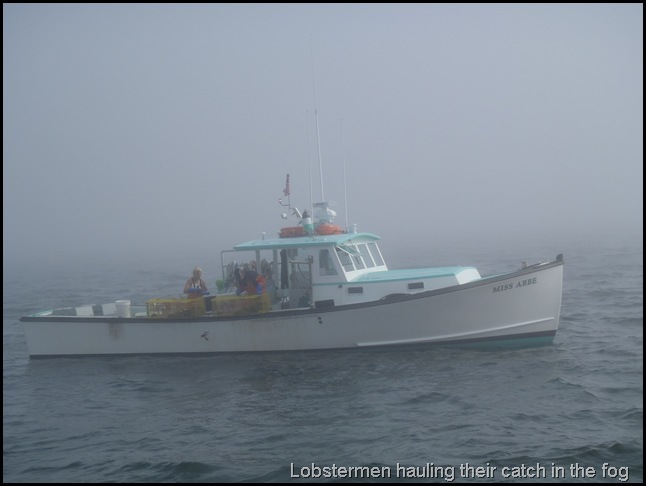 As we made our way up the winding channel , the fog started to lift and the some of the rustic  homes and small villages which lined the shore came into view. 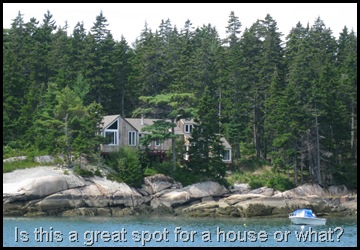 After spending one night in Carver Cove we moved on to Seal Bay, which is described in the guide book as having “unspoiled scenic beauty and secluded charm”. The book was right and Seal Bay turned out to be one of our favorite anchorages.The entrance was a bit of a dogleg around a few big boulders and ledges,  but once inside the surrounds were extremely pretty with pine trees all around and the odd seal basking on the rocks. A few other boats had obviously read the blurb in the book as well and we shared the bay with about ten like minded yachts. Being the only boat in the anchorage not sporting the star spangled banner from the stern is a dead giveaway that you’re not a local. The other giveaway is that we are a catamaran, a bit of a rarity in these waters. 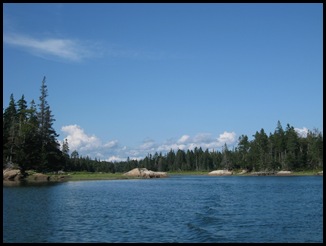 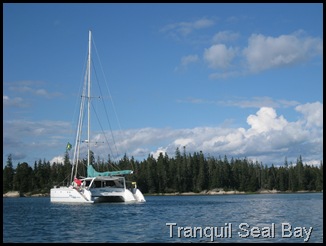 Not long after anchoring a friendly chap rowed across to say hello and gave us a few tips on how to harvest some of the  succulent wild mussels that grew just below the low tide mark on the ledges behind us. He assured us that once we’d tasted them we’d be hooked and he invited us to join he and his friends at their next anchorage if we were heading that way. We spent a couple of nights in Seal Bay and then moved on travelling north towards Mt Desert Island.

Maine is the home of Hinckley Yachts and they are definitely the flavor of the month up here. Without fail just about every dark blue hulled yacht that you see comes from the Hinckley Stable and there sure are a lot of them.The elegant lines of these traditional sloops and ketches are very pleasing to the eye. Even the grunty tug-type powerboats  have a certain type of charm. And there is certainly no such thing as the tupperware sports fishing boats up here. In fact, there must be a magical line somewhere just south of the state border that prohibits them from coming to this part of the world, and it sure is  nice not to have  them  go roaring past you without any regard for their wake, as is the norm  down in the southern states. 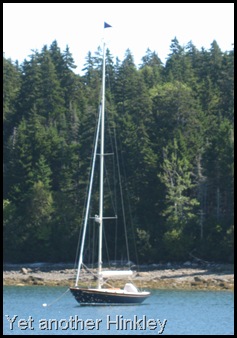 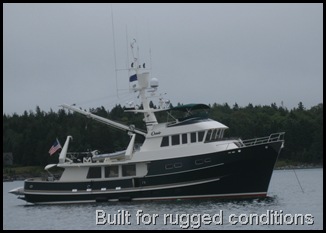 The further north we sailed the more evident the huge tidal range became. Maine has huge tides of around 12ft plus, something that you really have to bear in mind when anchoring or going ashore. Luckily we have wheels on our dinghy so if the tide goes out while we’re off on a hike, then we just wheel it back down to the water and that sure beats trying to carry/drag it over rocks and through mud. 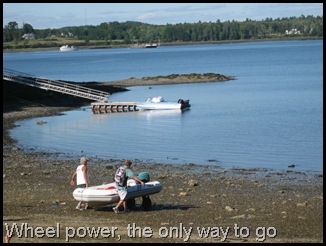 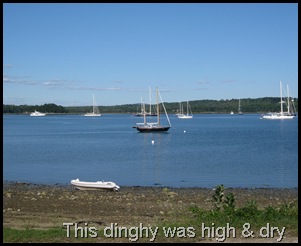 The town of Stonington on the eastern shore of Penobscot Bay is your classic lobster village. No  pleasure craft call this place home. Seeing  the multitudes of working lobster boats and quite a few lobster pounds (the local name for the co-ops), we decided that this would be a good place  to stop a while, have a spot of lunch and buy a few lobby’s. Little did we know that this was actually the best place in the whole area to buy them. 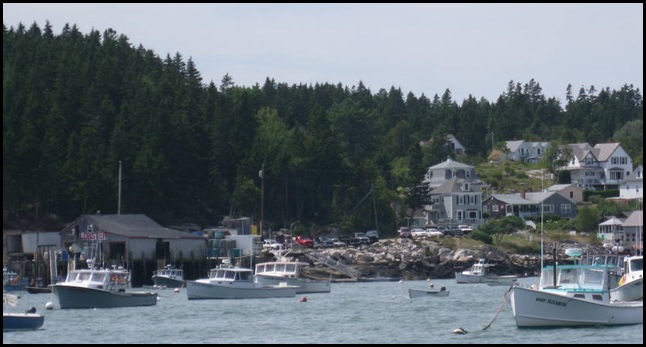 After getting directions from some thick accented Lobstermen as to which pound sold to the public,  we trotted off ready to part with a few more dollars. The lobsters were coming  straight off the boats and they were huge. Paying between $4-$7 per pound Liam picked out a couple of beauties. It’s amazing when you see just how many lobsters are in each crate and how many crates there are at the pound, you’d think that there can’t be any more lobsters left out there, but there are. The sea floor must literally be crawling with them. Apparently each lobsterman is allowed to have 800 lobster cages each. That’s a lot of lobsters! We left town with six lobsters, two of which were destined for our tummies that evening. 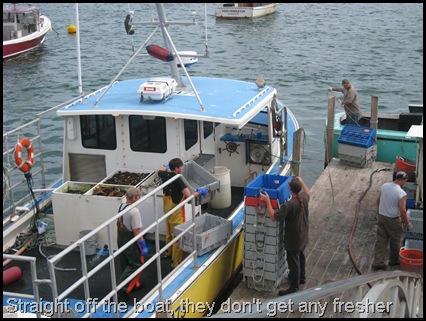 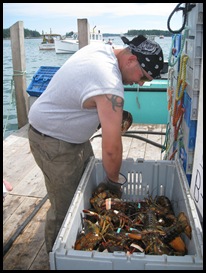 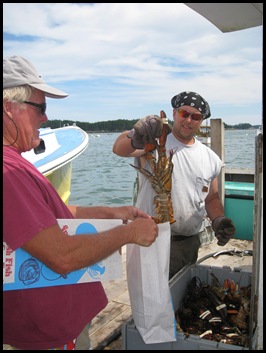 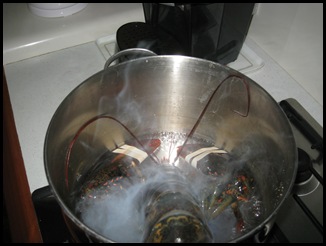 The next few days were pretty overcast and cool, so we stayed put in a cozy anchorage that we found on Swan Island. Reading, doing chores, watching dvd’s and of course eating lobsters  filled in the time rather nicely. When the weather improved we moved over to Southwest Harbour at the bottom of  Mt Desert Island .The place read rather good and we needed a few supplies as well as a couple of things from the West Marine chandlery, so a night stop was in order. The town itself was pretty small but it had all the necessary stuff including a nice homely Inn where we enjoyed a light lunch on their terrace.The lobster theme had found its way into the most unlikely places here including an ice cream shop and the Chinese restaurant. I guess it’s tough luck if you don’t like lobster, but then who doesn’t. 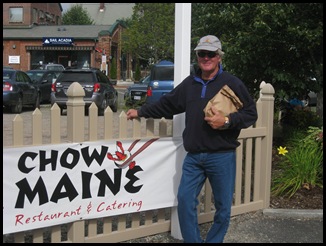 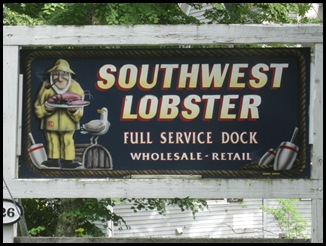 Our next stop was Bar Harbor, and this would be the furthest easterly port that we would visit in Maine.The eight mile run up to Bar Harbour under screecher and sunny skies was just what we needed after a couple of overcast days.There’s nothing like sunshine and a good breeze to lift your spirits, mind you we had to be on our toes with all the lobster pots that were about. Most yachts in Maine have wire cages fitted around their propellers so as not to entangle themselves in the maze of pots. For us, sailing or even motoring in these waters was quite challenging at times and the shortcut that we took through Eastern Way was one of those times.

Just after anchoring in the harbor, we heard a  voice over the VHF radio, one that we’d not heard  since back in Thailand in 2008. It was the dulcet tones of Greg from the yacht Erin Brie. Now what are the odds of both boats being in this part of Maine at the same time?

Despite reading negative reports in a magazine article saying that Bar Harbour was a bit of a zoo, we found it just the opposite. It is a lovely town and a popular tourist stop being the base town for the Acadia National Park which is pretty much the reason most  people come to the island. Dominating the skyline are Mounts Cadillac, Dory and Champlain and with hundreds of paths, trails and inland lakes it’s no wonder that hiking, cycling, climbing and kayaking are the favored pastimes here. We spent four days here exploring the town and what was on offer.Taking one of  the several free bus routes around the island and the park saw us head up to Jordon Pond for lunch. The cafe here, actually it’s the only one in the park, had both indoor and outdoor seating, but for us it just had to be a table in the great outdoors on the grass by the lake. With such a stunning setting it seemed crazy that anyone would want to sit inside. 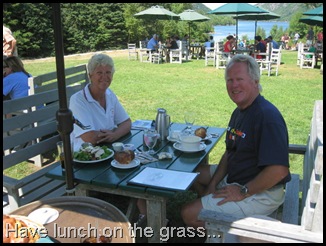 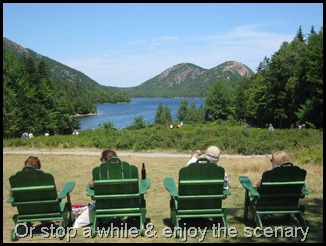 Town itself was charming with lots of interesting shops, plenty of homewares and  Christmas ones, some good restaurants and bars and lovely parks. The Hannaford’s supermarket was an easy stroll from the anchorage and we even lashed out and bought a digital TV box so at last we could watch American TV in the comfort of our own boat. That was just pure bliss! 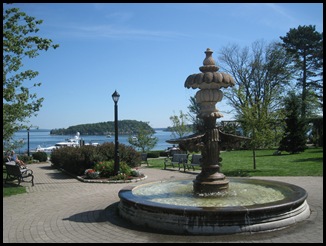 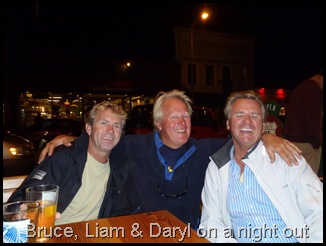 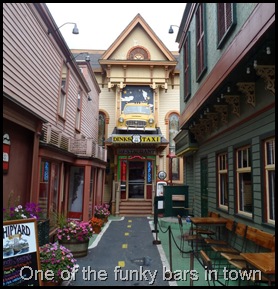 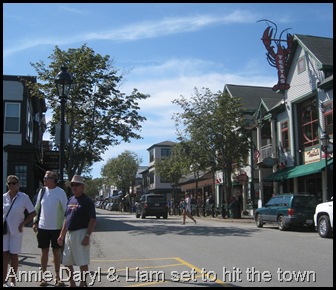 Once again it was time to move on. There was a whole lot more to see on Mt Desert Island as well as the northern parts of Penobscot Bay…so many bays, so little time.