Sea birds and fishing trawlers are always a good sign that land is just over the horizon, and we've seen both today.
The wind god's have once again been playing games with us, sometimes there is zip wind and then it strengthens back up to around 15kts.
After motoring for a couple hours last night, ever so slowly the wind built. Early morning saw the mainsail creeping up the mast again. Five  days of rest  was enough. Time to give it one last run before arriving into Barbados. With the jib keeping the main in check for most of the day, the afternoon saw the wind backing towards the north, so it was time to bring out the big guns, aka the screecher. Scooting along with good speeds, this was only the second time since leaving the Cape Verde Islands that we have been able to sail on a beam reach, conditions that are right up our alley.
The seas appear to be calming down and we are now getting lovely long slow swells, a pleasant change from the washing machine effect that we were in yesterday
Not long ago the fishing line "pinged" and we pulled in a 4ft blue marlin. She was a fighter and  took a fair amount of energy to land. As we watched her lying calmly on the transom  with her beautiful colour and sleek form, neither of us had the heart to keep her. After a little minor surgery to remove the hook she was released back to the care of Mother Ocean.
Our evening radio sked reported that "Stardust" and "No Rehearsal" are snug as bugs at anchor in Bridgetown, congratulations to them both for making landfall."GWTW", "Samsara" and "Tehani Li" are with in a couple of miles of each other and should all be on the anchor before dawn."White Rose" has found a windless part of the ocean, as we all have at various times and have been motoring for the last 15 hours. They have just over 500 miles to run, approx 3-4 days.
With only 50 miles to landfall and the wind doing its usual stuff, getting lighter, we furled in the screecher and hoisted the kite. Coasting along nicely with a 12 kt breeze doing 9's and 10's suddenly there was a bang and we watched our lovely kite nose dive into the sea. Liam quickly turned the boat to port, effectively blocking the wind and stopping the boat from running over the pretty green and white spinnaker. Annie, the sure footed mountain goat that she is, bounded to the foredeck and started pulling a very soggy kite back on board. Liam wrestled with his end and soon it was back on the deck with no damage. During the commotion the starboard fishing line had become tangled around the port rudder, so on with the mask and snorkel and into the 29 degree water Liam plunged. The lure had become wedged at the tip of the rudder but with a bit of persuasion he was able to free it.
A post incident inspection revealed that the kite halyard was chaffed through just where it sits on the turning block at the hounds.
We now have a ball of wet salty fabric sitting on the foredeck and a halyard trapped inside the mast.
Just as an aside, earlier in the day, Samsara also dropped their kite in the water but they are unsure at this time as to whether the cause was the snap shackle or the halyard letting go. "No Rehearsal" had the exact same problem a few days ago.
Guess that's one more job for the "to do" list.
We continued the rest of the way under mainsail and screecher.
Sunset seemed to linger in the sky just a little longer than usual tonight as if beckoning us toward the Caribbean. The colours were just wonderful, oranges, pinks and yellows with a dusky blue sky above. "Red sky at night, a sailor's delight" Picture perfect for the end of an Atlantic crossing.

In the distance the twinkling lights of Barbados are just coming into view. As the night gets darker the nav strobes of arriving and departing aircraft can be easily seen. A large ship is steaming towards the island just a few miles off our port side and the familiar white flash of a lighthouse confirms that we are on track for the signal station at the bottom of the island. More and more lights are now appearing, it's sensory overload after nearly 2 weeks at sea when the only lights we'd see were the occasional ship and the stars above.

At 2325 we called up Bridgetown signal station to announce our arrival and request permission to anchor in Carlisle bay. The well spoken gentleman was more than happy to grant our request.
With that formality complete… We have finished our Atlantic Ocean crossing….and  have  officially arrived in Bridgetown Barbados.
A few minutes later we arrived in the anchorage where Stardust were waiting to greet us . We put the anchor down , cleaned up and popped the bubbly ( and a VB for Liam). 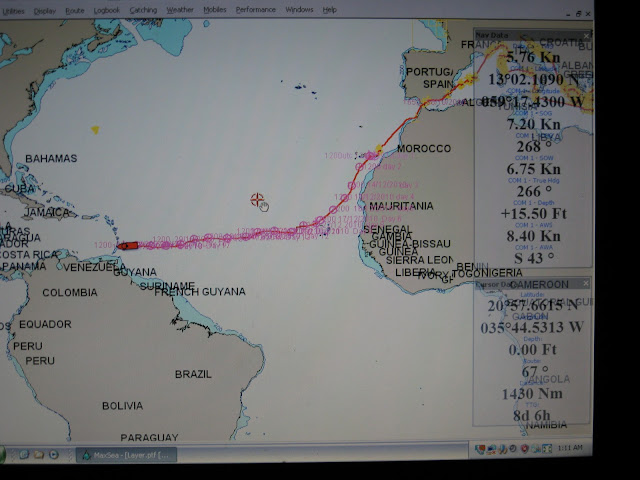 Journey's end. We have arrived in Bridgetown, Barbados


A couple of interesting statistics…

Total passage log  read… 3,153 miles.
Total hours at sea from the Canary Islands to Bridgetown  Barbados, excluding our  down time  in the Cape Verde Islands,  was …17 days 19 hours and 35 minutes.
Average speed… 7.37 kts. ( it was a slow trip)

Well, what a mixed bag of emotions we have right now. It's really hard to put all those feelings into words. Annie shed a few tears of joy and we both shared feelings of enormous relief and satisfaction in actually getting here. Considering the Caribbean has been a serious focal point for some years, it really does represent a fantastic milestone for us,similar to the Red Sea and  the Med, but with no places to stop along  the way.  Having completed our longest passage so far, and realizing we are now in a totally different environment of cultures and climates, we sense a genuine feeling of change.
This is not the Med, it's a diverse combination of  American/African/Latino people living in a bunch of small countries on islands scattered over a relatively short distance. We are swapping ancient walled cities, numerous cathedrals and countless Roman ruins for vast stretches of golden, sandy beaches, lots of palm trees, pina coladas, lobsters, 'till you're sick of them, and noisy steel drum bands…bring it on!
And so a new chapter in our cruising life begins...
Welcome to the Caribbean, Mon!
Posted by Amanda and Mark on Monday, January 03, 2011