We are happy to say that one more thing has been ticked off the GWTW list for 2010…the elusive "green flash". Watching the sun dip below the horizon last evening the sky went all the usual colours but with a big green tinge. Yep we reckon that at last we have seen it. The flash was something we have strained to see for years, now we'll probably see it every other day!
It's been an interesting 24 hours on board GWTW. Friday morning marked a significant change to our sail plan…we actually unpacked and hoisted our beloved kite, before breakfast!!. We have been running close to dead downwind for days now, certainly not our best angle of sailing, and it has seen us slip well behind "No Rehearsal" and come under serious challenge from "Tehani Li". In fact after catching her yesterday afternoon, the latter nosed past us last night under kite and poled out jib. So bringing the coloured sail out of retirement was welcomed with anticipation, and we weren't disappointed. It took most of the day but we again managed to reel in "Tehani Li", passing within  meters of each other. 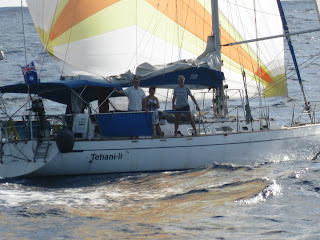 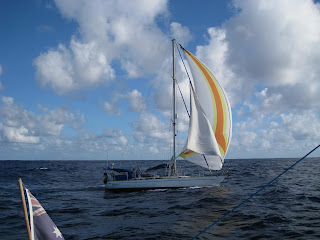 We both thought it pretty neat that, after over 1600 miles at sea in the Atlantic Ocean, we crossed wakes close enough to have a chat and wish happy new year to another yacht, and an Aussie one at that. Naturally the opportunity for lots of happy snaps was not to be missed. 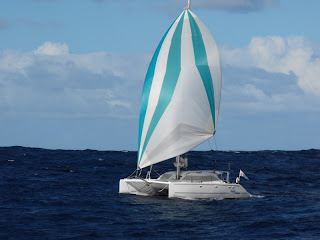 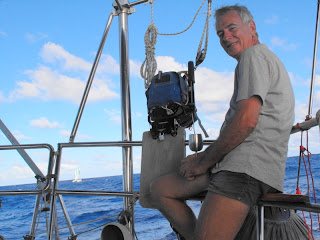 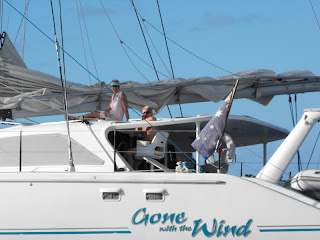 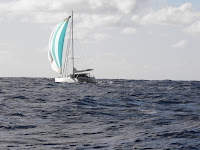 
We now have around 150 miles to go to Barbados  and the evening  has seen us reaching along nicely at 8-10 kts.
With steady winds forecast for the next few days we are still on schedule  to arrive in Bridgetown late Sunday, more than likely it will beat night.
With "Stardust" and "No Rehearsal" due there early Sunday we will have some forward scouts, so finding a good spot to drop the anchor shouldn't be a problem.

So far we have had a pretty trouble free trip, sailing fairly conservatively overall. It does appear though that one of our hot water tanks or the element inside , which is more likely, may have corroded. Brown water is coming from the hot water taps, but that's not too bad, we do have a second tank in the starboard hull. Hopefully can replace the offending part ( the element is  240 v) in the Caribbean.

Tonight is a big night for us…yep, it's New Year's Eve. We plan on cracking the obligatory bottle of bubbly at midnight (local time) and partaking in some festive spirit. The party is very exclusive though, being just the two of us, and we will be somewhat limited in our alcohol  consumption, but we'll have fun.

2010 has been a great year for us, we have been to some fantastic places, met  wonderful people and made some long lasting  friendships One thing is for sure,  at midnight we will be raising our glasses and  toasting to family and all our friends, new  and old ...wherever  you may be.