Having left the west coast behind we headed up to the start of the Alpine Highway and inland to the famed Arthur's Pass. This 231 klm stretch of road at it’s highest point of 920 metres is known as Arthur’s pass and connects the east and west coasts and is one of the three major routes to do so.

After a quick bite to eat at the historic Stagecoach Hotel we continued on stopping at the major attractions along the way. We marveled at the incredible feat of engineering named the Otira Viaduct, which spans 440 meters of unstable terrain below. 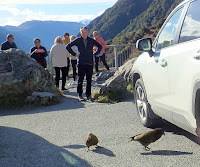 Across the Viaduct was yet another Kodak moment and the chance to get up close and personal with some very cheeky birds known as Kea. These cute parrots love to chew on anything that takes their fancy including rubber on van roofs.

They are also adept thieves stealing hiking boots left outside trampers tents as well as pulling out the tent tiedowns in the middle of the night. But they are so cute you have to love them anyway.

From here we continued on to Arthur’s Pass Village and got the low down from the friendly folk at the tourist info hub on a few hiking trails and waterfalls to stop at on our journey east.

First up was the Chapel of the Snows and Millennium Falls which occasionally freezes over in winter, but not today.

After an overnight stop at the DOC campground at Klondyke Corner which was nothing spectacular, it was back to the village to visit Bridal Veil Falls and Devils Punchbowl Falls then further east to the DOC camp at beautiful Lake Pearson, passing by alluvial deltas and snowcapped mountains along the way.

Our next target was Mt Cook, New Zealand’s highest peak, but not before we stopped at the famous Kiwi Pie shop in Sheffield. Wow what a delicious collection of pies they make. No wonder there was a line up to get in the door.

From Sheffield we turned right passing through the quaint towns of Geraldine and Fairlie before a quick stop at Lake Tekapo, and inland again to Mt Cook where we stopped for the night. It had been a long day’s drive through drop dead gorgeous countryside of the Canterbury Plains. The DOC campground at Mt Cook was the dearest we had stayed in so far at $30 per night but it was the only gig in town to be on the doorstep of the Hooker walking trail. 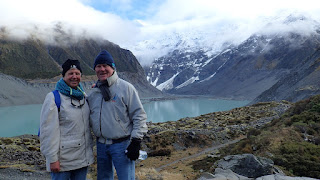 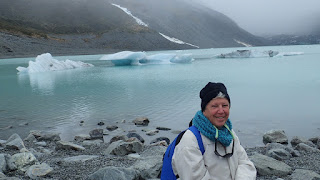 The trail is10klm round trip and took us roughly three hours to complete. Treking over three swing bridges with views over Lake Mueller and past avalanche prone Mt Sefton the trail winds through old moraine ridges with the vegetation changing as the valley floor becomes wider. The trail ends with fab views over iceberg speckled Hooker lake. We sat there for a while and even dipped our hands in the very ice cold waters. Then it was time to retrace our steps back to our trusty RV for a spot of lunch and some well earned quality time with our diesel heater.

Next on the agender was a short drive to the Tasman Glacier.

Liam was all walked out when we got there but I soldiered on and tackled the 367 steps to the top for the “had to be seen to be believed” views over the alpine lake and with the glacier and Mt Cook in the distance.

The 23 klm Tasman Glacier is the longest in New Zealand. A half way stop on the way down at the Blue Lakes which have now turned green due to algae growing  was greatly appreciated by my poor old knees. 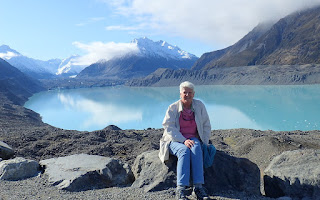 As the day was wearing on and we were to be overnight guests with fellow cruisers, from Dash, Starlet and Ocean Fever who had rented a house in Wanaka for a weeks skiing, so we needed to get cracking,

Our last stop of the day was at Lake Tekapo with its beautiful light turquoise colours thanks to the snow melt and glacial silt.

It reminded us of the water colour in the Bahamas. Here’s a fun fact, Lake Tekapo is one of the sunniest places in New Zealand with sunshine hours averaging more than 2,400 each year. File that little gem away, you never know when that question will come up in a quiz or on The Chase.

After a fun night and great dinner  with our buddies we headed off to Queenstown via the Lindis Pass which links the Mackenzie Basin with Central Otago. The actual pass crosses a saddle between the Lindis and Ahuriri rivers at an altitude of 971 metres.

The scenery was outstanding with a dusting of snow on the surrounding mountains. The pass was closed later in the day due to black Ice and snow, so were lucky to get across.

Arriving into Queenstown we checked into the Lake View Holiday  Park which we’d call home for two nights. We rode the Skyline Gondola to the top, for excellent views over the township and lake with The Remarkables as the backdrop. This gondola boasts as being the steepest cable car ride in the southern hemisphere, yet another little bit of trivia for you. While in town we also caught up with friends Jennifer and Mark from Starlet as well as Kellie and Mike from Dash who had now moved camp to Queenstown for more skiing and we splurged on an exhilarating helicopter ride to the top of the Crown Mountain Range landing on the snow. Man was it cold up there. 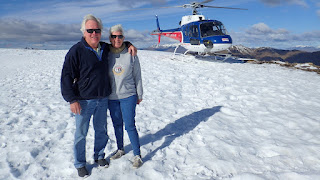 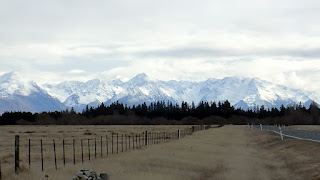 Leaving Queenstown behind we headed south and then east to Fiordland and the major attraction of Milford Sound.

From Te Anau it was a long drive into Milford 120 klm each direction with many roadworks along the way but the scenery was just jaw dropping.

Not wanting to drive after 3pm because of icy winding roads we stopped at Walker Creek campground for the night. Having booked a cruise on the sound for 10am the next day we hit the road early and made it there with half an hour up our sleeve. 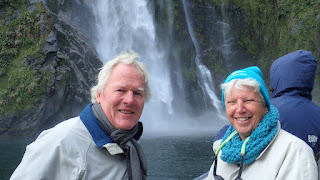 The cruise lasted a couple of hours and we saw dolphins, seals, penguins and got up close, personal  and wet with a couple of waterfalls as well.

Having seen what there was to see in this sleepy little place we retraced our journey, back through the Homer Tunnel which is yet another feat of engineering which took 19 years to build and along the winding roads to the campground at Deer Flats. Next morning we awoke to the big freeze.

Yep overnight the temps had plummeted and all around us resembled a winter wonderland of glistening frozen vegetation. It was just beautiful with the sun shinning on it.

Along the way back we stopped at Mirror Lake which as the name suggests reflects a mirror image of the snow capped mountains across the valley in the still waters of the lake. 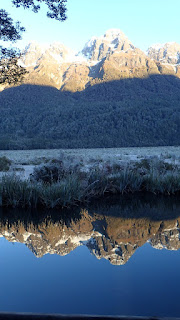 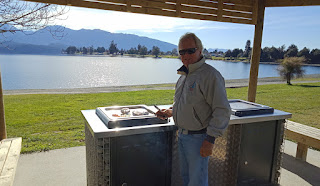 By the time we got back to the junction town of  Te Anau our tummies were rumbling.We found a lovely park along the shores of Lake Te Anau backed by the snow capped mountains of Fiordland and set up for a very scenic lakeside BBQ lunch. Day 20 of our roadtrip had us arriving in Bluff, the most southern town on NZ’s South Island.

It is famed for it’s huge Oysters but do you think we could buy them anywhere in town ..not a chance. The oyster season we found out runs from late March to August. Oh well there were still other things to do in town.

We checked out the Maritime museum, drove up to lookout on Bluff Hill, stopped at the Pilot station and visited Sterling Point with its famous mileage signpost for many cities across the globe and yes we got the photo. 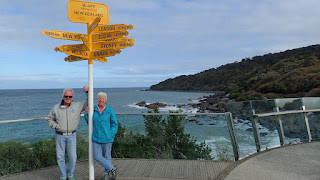 Next stop was Invercargill for the night. We explored what was on offer in the town, that being Queens Park, a 80 hectare parkland which includes a Japanese garden, an animal farm, a waterpark, a myriad of sculptures and bird aviary and the list goes on. We spent a couple of hours here and still didn’t see it all. 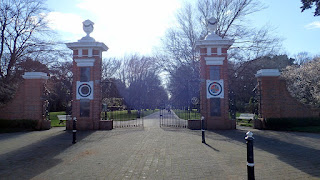 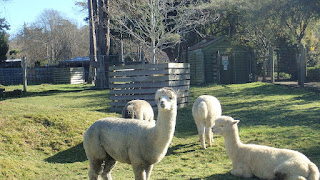 Just up the street was 1889 Water Tower, that actually looks more like a lighthouse. It was built to supply water to the town in the event of a fire. 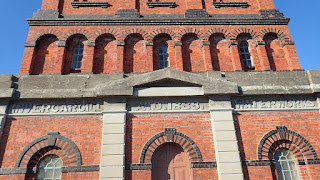 Leaving Invercargill in our wake our next major destination would be an area known as the Catlins. So stay tuned for the  next blog post.