Our clearance into Opua, NZ was as seamless this time as it was last year. The NZ Customs, Immigration and Bio Security personnel are the best we have come across worldwide. Regardless of the fact that there were 18 boats at the dock eagerly waiting for clearance, the officials were all smiles.

Once our turn rocked around and we were done and dusted we moved GWTW into her allocated berth in the Bay of Islands Marina, the place we’d be calling home for the next couple of days.  Having exhausted our freezer supplies we figured a meal out was the order of the evening. The local yacht club  which we remembered from last year, had a good menu at cruisers’ prices so we strolled on up. Sadly it was closed for a private function, a wedding. Bummer.

Ok, that’s when plan B came into play. We knew the General Store next to the YC did a good pizza, but sadly they had just sold the last one and were now closing up for the evening. Double bummer. The fish and chip takeaway was next on the list, can you guess, yep closing too. Sounds like alfresco canned food dining on the good ship GWTW tonight. Oh well.


So as we strolled a bit further down the road a pale blue convertible came buzzing around the corner complete with bride and groom. The car, a beautiful old Triumph Herald, coughed and spluttered, stopping just across from us, what a way to start married life.

Liam and another passerby came to their rescue pushing the car along ‘till it burst back into life and the happy couple were once again on their way. Good deed done for the day, it was time to go crack that bottle of bubbly and celebrate our arrival back into New Zealand.


The next few days were filled with meeting all the folks from the boats we’d heard over the airwaves on our journey south from Fiji, as well as re-provisioning, washing  down GWTW, doing laundry and generally soaking up all the mod cons of first world living.  We also bought a cruising guide named "Spot X Cruising" which covers the Three Kings Islands and the east coast from North Cape through to East Cape in the Bay of Plenty.

The Bay Of Islands is located in the northern part of the North Island of New Zealand, and is comprised of 144 islands and rocky outcrops. Some islands are privately owned, some are national parkland with numerous hiking trails and others  have the odd house surrounded by rustic farmland with stone walls. The drawcard towns on the bay’s edge are Kerikeri, Paihia and historic Russell, the original capitol of New Zealand way back when.

The first European to visit the area was Captain Cook back in 1769, and this was also the first area in NZ to be settled by Europeans in the 18th century. The missionaries arrived in 1814 and they were followed by whalers toward the end of the century.
These days this area is extremely popular with boaters as well as tour operators, and we were about to go out and see the place first hand.

Our first stop was in Orokawa Bay on the peninsular of the same name. It was a lovely spot, tranquil and very sheltered from the north which is why we chose to anchor here. With only two or three houses ashore there was not a human to be seen. Apparently dolphins and a pair of Orcas frequent the bay, although the only wild life we saw were a few ducks who came a calling several times a day. Our internet provider, “Skinny”, had an excellent signal in this bay so we were well connected to the outside world. 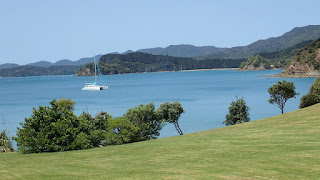 The following day we moved around to the opposite side of the peninsular to Parorenui Bay for a change of scenery as the wind was forecast to come in from the west.
There are no homes here and we were the only boat anchored.

A pebble beach complimented by a vast expanse of grass greeted us on arrival.
A stroll ashore in the afternoon provided wonderful views across the bay and islands beyond, as well as a good phone signal from the highest point.


It may seem that we were rushing through the anchorages, but to be honest, when we moved from one to the next it was usually only a stones throw away. We’re talking a few kilometers at most and anything over five or six would be called a long passage, requiring a G&T after the anchor was set! 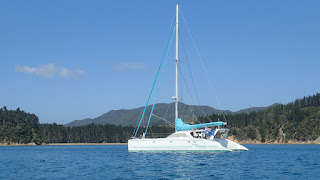 And so moving on we plopped the anchor down in pretty Omakwiw Cove. Backed by a pine clad shore  and a vast drying expanse of sand at low tide there were a few interesting walks ashore. One path on the left side of the bay led up steps to a trail which brought us out at a very old and interesting cemetery, “Te Rautawa Urupa” perched on the headland. 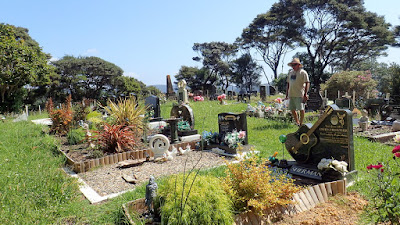 The graves were adorned with trinkets, plastic and glass flowers as well as fresh ones and curios from the deceased’s past.

One headstone had a guitar etched into it while others had children's toys encasing the site. Some of the graves dated back to the 1800’s.

It was an interesting way to spend the afternoon. 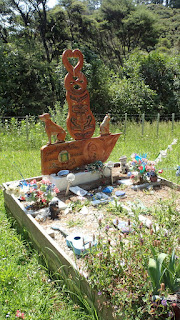 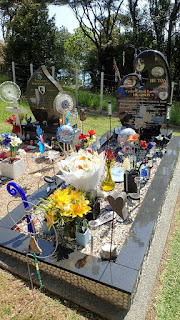 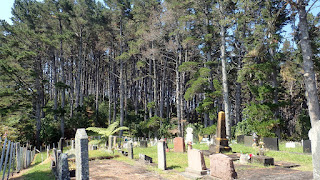 Our next stop on the agenda was in cozy Otehei Bay, Urupukapuka Island. We’d read in our guide book that a decent sized café / bar sat at the head of the bay, so we jumped in the dinghy to check it out. A meal ashore would be a bit of a treat if they were open and lucky for us they were. 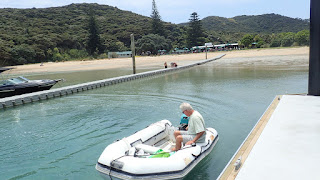 The Explore tourist ferry, we were told arrives at 1240  and it was suggested by the friendly staff that we should put our order in asap, which we did. We chose a table overlooking the lawn with GWTW sitting quietly at anchor as a backdrop. 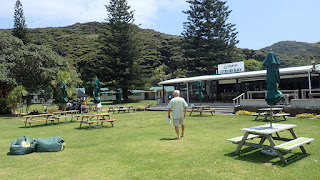 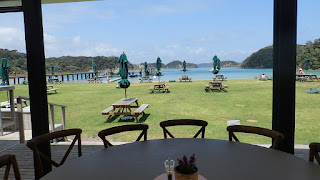 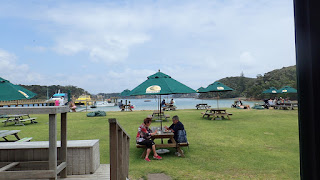 Right on time the ferry arrived and a goodly number of patrons disembarked. This place is popular with hikers, kayakers, cruisers and the tourists, so it seems. We had a lovely lunch complimented by a chilled bottle of Matua Sav Blanc.  The menu was very good and the prices quite reasonable given the remote location.


The same afternoon our friends onboard S/V Scoots were arriving back from their passage from Fiji and we decided to surprise and intercept them, and escort them into the marina.

We’d been tracking them via our AIS system on board so we knew where they were and how fast they were sailing.

It was a great moment when we saw Vandy and Eric’s happy smiling, but tired faces. They had had a long passage in less than ideal conditions but they had arrived safely home. Now all our ducks were back in a row again.  We too had booked into the marina  so we could catch up and have dinner with V&E and it was just like old times. We love you guys! 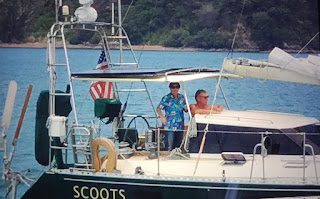 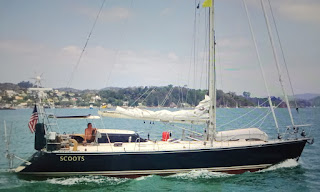 Over the coming week we mooched around a few more islands including beautiful Roberton Island, Hahangarua Bay on Moturua Island and Paradise Bay back over on Urupukapuka Island.
By now it was early December and time to start nudging our way down the coast towards Whangarei.  Hoping to catch a nice Kingfish or two on the sail down it wasn’t long before all hopes were dashed as we lost our last Rapello lure when the knot joining the line and trace parted ways. 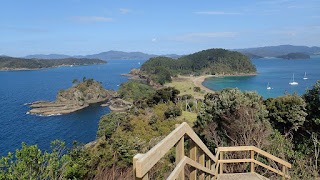 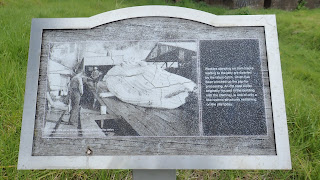 We had three more stops before arriving in Whangarei, the first being at the old whaling station in Whangamumu Harbour.

We originally planned to stay the night here but the wind had increased and the bottom holding was rock and shale and that’s not great.

After our mini explore of the whaling station ruins  we decided we weren’t really comfortable staying the night here. So after a bite to eat off we went again, this time heading for Sandy Bay in Whangaruru Harbour, four hours away.

This turned out to be an excellent choice due to the predicted gale force northerlies arriving at zero dark thirty. We put out 130 ft anchor chain in 12 ft of water and we didn’t budge an inch. Hands down, nothing beats anchoring in sand or mud.

As the wind was still blowing dogs off chains the following day, we figured there were worse things to do than just staying put and waiting for the elements to calm down. 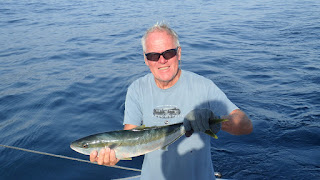 On our last ocean passage of the year the fish gods came to the party and just before rounding Whangarei Heads Liam landed a nice size Tuna.

So fresh sashimi with sundowners that night as sat at anchor tucked up in Urquharts Bay beneath the stunning headland.

Next morning we had a quick haulout at Marsden Cove Marina as we were planning to change our insurance company from Pantanius USA to Pantanius Australia. To do that we needed to have a surveyor come along and inspect the boat and tick all the boxes.

Unfortunately, once the hydraulic trailer pulled us out and it leveled off on the flat of the haulout ramp, there was a almighty bang accompanied  by the odd “what the f*%*k was that?”

It turns out the the repair to the anchor chain locker that Liam had done way back in French Polynesia in 2017 had slowly been delaminating and today was the day it let go.

There was no gaping hole or anything light that,  the repair area had just kind of gone spongy like a wedge had been pushed in between the layers of laminate. It was a sickening sound and a sickening feeling to say the least. Still,  its nothing that time, money and good tradesmen couldn’t fix. And New Zealand is definitely the right place for that to happen.

Our last night at anchor was spent in a little bay called The Nook, a few miles up river from Whangarei Heads.

It’s a delightful spot with a
“If I could buy it I would” waterfront house sitting pretty as punch just behind GWTW.

That evening we toasted our good health, a great six months of cruising Fiji and our safe passage back to New Zealand.  There was no reason to dwell on the day’s events ‘cause sometimes shit happens.

Next morning we toddled further up the river to the Town Basin Marina and slotted back into our normal berth as if we’d never left.

It was great to be home again.

GWTW has hauled at Marsden, Harbourside and Port Whangarei.