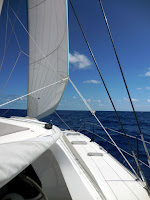 After being handed our clearance papers by Customs, we departed Port Denarau Marina at 1230 pm on November 14th. The run south to Opua on the north island of New Zealand would see at least 1200 nautical miles disappear under our keels.

Due to an impending weather system roaring up the Tasman Sea we were hoping that the voyage would take five and a half days.
Our friends on the yachts Scoots, Velic  and Rewa elected not to leave as they were pretty sure they couldn’t out run the front due to arrive in NZ’s north on November 21st.

So off we went all by ourselves . A power boat had left the marina about an hour before us and called on the radio to let us know that for a couple of miles after exiting the reef pass at Momi Bay the seas were very confused, and they were. Boisterous or sporty we’d call it .

A few hours later the conditions remained the same so we furled our forward sail, the jib to halfway.

Our boat speed sat nicely on 8-9 knots but the sea state was rough with a swell of 1.5 meters and the wind had climbed to 17 knots.
A tad uncomfortable. 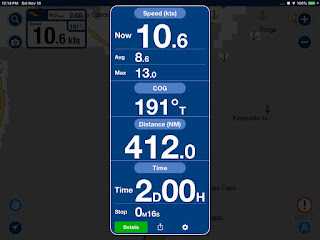 Day two was much better. The seas had laid down overnight and it was a picture perfect day, blue skies and warm sunshine. With the wind a south, south easter at 15kts GWTW slid along under full mainsail and half jib at speeds of 10-11knots. Our 24 hour run showed we’d swallowed up 212 nautical miles. Yeeha!


We kept on trucking along like that all day and night. We were in the groove. The night watch was uneventful except for two fatalities of flying fish landing on the deck. It was clear skies above with the light of the full moon dancing on the waves. Perfect.

Day three and four were much the same with respective 24 hr runs sitting at 209nm and 173nm. Over the course of the fourth day the wind slowly died, the seas flattened right out and the “iron maiden” came into play. Yes, the engine was fired up and motor sailing came into play on and off for the remainder of our passage.


We could have sailed, albeit slowly but we are not purists like some especially when you want to make port before the weather turns to custard.

So far the fish count was still zero but we were being treated to some spectacular blood red sunsets due to the smoke haze from the  bushfires ravaging Australia. 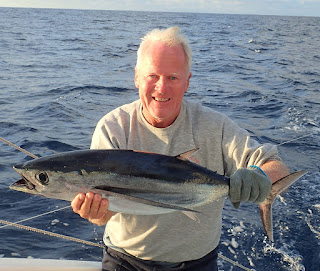 On our last evening at sea the fishing duck was broken as Liam landed a good sized Tuna.

We now had just 87 miles to the finish line and were rugged up to the hilt as the mercury steadily dropped the closer we inched to NZ. The sea temps too had plummeted from 25c in Fiji to a chilly 15c.

The passage had taken us five days and twenty one hours.

We’d beaten the weather system, caught a fish, enjoyed some fabulous sailing and arrived  one hour behind boats that had left Port Denarau 24 hours before us.

It was great to be back. 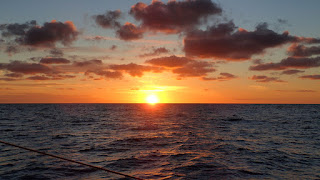