Fun and Games over, time to explore the Yasawa Islands 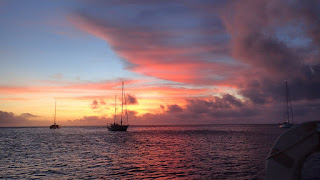 Following a rather hectic week at the Musket Cove Regatta we decided a little bit of chillout time was required.

We stayed put in the bay for just over a week which my no means was a hardship. and enjoyed all the resort amenities making good use of both the pool and golf course.


With the majority of the yachts having moved on it was nice not to be cheek by jowl for a change.  The highlight of our weeks’ R&R was most definitely the nightly visits by a pair of Giant Manta Rays.
They arrived promptly around 9pm mesmerizing us with their endless graceful tumble turns illuminated by our blue underwater lights.  As they went through their routine they hoovered up masses of tiny plankton. It was magical to watch their antics and we had the best seats in the house. See the video below.


Over the coming weeks we slowly cruised up and down the Mamanuca and  Yasawa chain of islands.
Most often we had anchorages to ourselves. We stopped once again at beautiful Ro Ro reef, also known as “Cloud Nine'’ and enjoyed cooling off in the brochure blue waters. 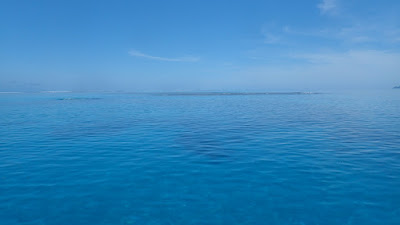 From there we sailed up to  Monuriki island where the movie “Castaway” was filmed. About the only thing remaining these days  from the film set are the coconuts spelling out “Help Me”

Weeks earlier an underwater volcano in Tonga  erupted and spewed thousands of tons of pumice into the surrounding waters. That pumice had taken weeks to disperse as it floated west with the ocean currents pushed along by strong easterly winds. 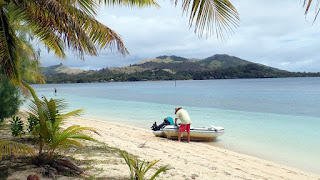 As we journeyed north it was beginning to impact western Fiji and rafts of pumice were appearing all through the Yasawa Islands. In particular the Blue Lagoon area was hardest hit with all the beautiful beaches covered in chunks of both big and small brown pumice. 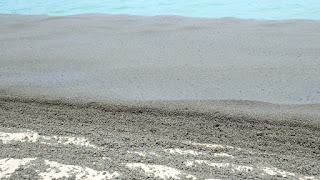 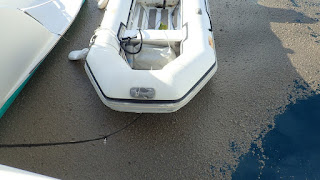 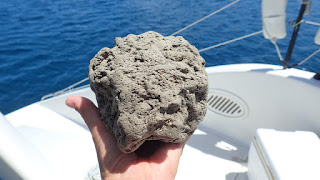 As we were once again hunkered down by strong winds we signed up with the Natalya resort for a private boat trip to the Sacred caves of Sawa-I-Lau on an island of the same name. 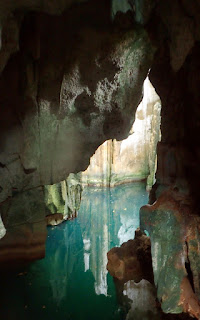 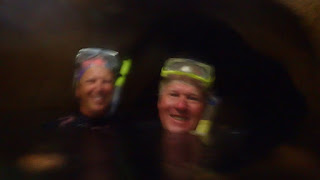 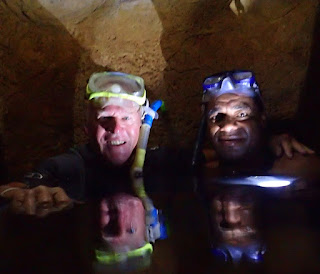 Swimming in the caves reminded us of being back in Thailand. These caves were similar to the Thai Hongs were the roof of the cave is open to the sky and there are tunnels and narrow swim throughs which take you deep inside the cave itself. The water in this cave was downright chilly compared to Thailand.


f To the north of Blue Lagoon we visited the village of Malakati where we sort out the chief, who was snoozing at the time, to present our Sevusevu gift of Kava root, also known as Yaqona, along with gifts of rice and sugar and a few pairs of much appreciated magnified reading glasses.

When a visitor arrives into a village for the first time it is mandatory that the traditional Fijian protocol of Sevusevu be performed. The dried root of the Yaqona plant, aka Kava, is pounded into a powder and mixed with water to produce what resembles very muddy water. This is then poured into a large bowl known as a Kava bowl and passed to the village participants now sitting crossed legged in a circle using a communal bowl.

The drink is mildly intoxicating and causes various degrees of relaxation the more that  is drunk. Both men and women drink Kava and  it is usually drunk in the evening after dinner.
Below are some village photos 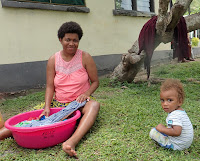 Moving further north to the top of Yasawa island we stopped at Cololeva Bay with its dazzling white sands and aqua waters where we sat out a few days of heavy wind. A few locals came by one arvo and after a bit of monitory negotiating came back after dark with a truck load of fresh lobster. Sadly a goodly number were way undersize. Needless to say both parties were very happy with the outcome.

We had gone as far north as we could so it was time to turn around and backtrack down the chain.
As we mooched back down from Cololeva Bay we  were accompanied by pods of dolphins , at least twenty if not more. 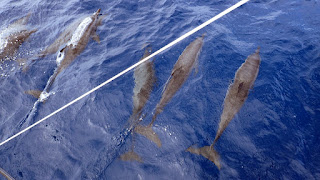 After dropping the hook in scenic Namatya Bay we jumped into the dinghy to snorkel the reef and came across a fisherman and his daughter spearing fish in the shallow waters.  We yelled hello from the  dinghy and the gentelman beckoning us over introduced himself as Pastor Simi from the local village.

After a bit of a chat he said he was in need of some bigger fish hooks, so of course fetched some from GWTW.


Liam asked if there were lobster in the bay and the Paster said that tomorrow he and his two daughters would come and show us where.

Next day they turned up on the beach around ten and while Liam and Simi went hunting I entertained his very well mannered daughters on board Gwtw.

Eventually many hours later and with all my guitar skills exhausted and  two packets of  chocolate biscuits devoured by the girls Liam showed up with three good sized lobsters. The good Paser also took a few home too. 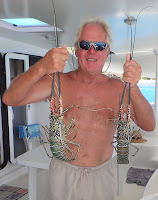 Simi asked if we ever back this way could we bring them a couple of swim fins and goggles. The girls put in a request for a guitar if that was possible, but not a new one they added
Well we will certainly pack some if we make it back to Fiji again.

Stopping for a few nights at the cruiser friendly Octopus Resort on the north west side of Waya Island.

We enjoyed snorkeling the reefs and partaking in the resorts Happy Hour. The resort is super friendly to cruisers and the bay is a great anchorage with 30ft of water over sand. We highly recommend this as a stopover when sailing up and down the  Yasawa island chain. 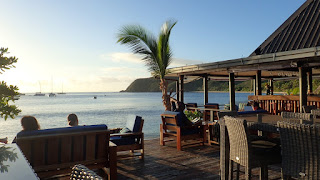 From here it was back down to the anchorage off the Manta Ray resort where we indulged in their ever so sumptuous Friday night Pizzas. Pizzas are cooked to order starting from 4pm and as a bonus happy hour goes from 5pm to 7pm. 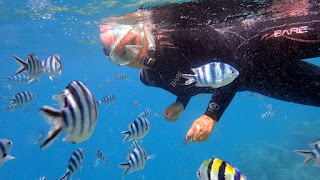 With just one more stop before heading back over to the big smoke of Port Denarau, stopping for the night at Castaway Island made for the perfect last snorkel of the season.


As luck would have that night we received an email from cruising friends we'd met by chance while anchored in Coff's Harbour way back in 2006, We'd just left Sydney and  were making our way to Darwin to begin our sailing adventure around the world.

Well Greg and Lisa had loosely stayed in touch over the years but apparently followed our blog site and our tracker which showed us currently being in Fiji. Their son Lachlan was to be married at Plantation Island this coming week and they kindly invited us to the wedding.

We lept at the chance to see them again after all these years. Honestly where have all those years gone. So off we went to help celebrate. It was a great couple of days meeting up with all the family again. And the beach  wedding was just perfect with the sun setting as the Lachlan and his new bride took theirs vows in  beautiful Fiji. 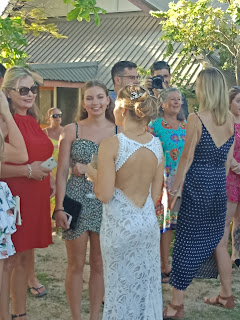 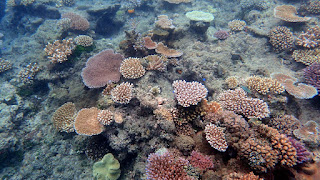 It was now early November and time to start looking for a suitable weather window to head back down to New Zealand once again.

With our berth previously booked at the Denarau Marina team GWTW nuzzled into the dock and settled into life on the land and all that comes with it. 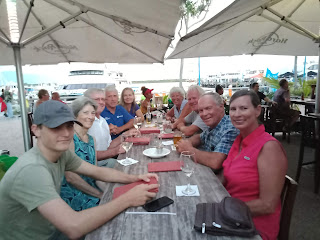 There were regular get- togethers with fellow cruising friends in the various restaurants around the boardwalk of the port and intense studying and discussions of the weather patterns.

Last minute trips on the bus were made into Nadi town for supplies for the upcoming passage south and arrival forms for NZ customs, Immigration and Biosecurity were downloaded, filled in and sent on their way through cyberspace to the various border security departments in the Land of the Long White Cloud. 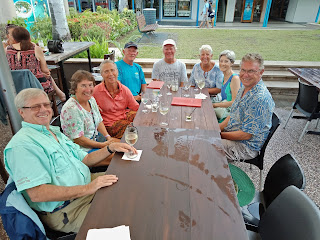 Then the whole thing became a waiting game. Some boats took off on what they thought was a great window only to get the crap kicked out of them halfway to NZ. It’s a nasty piece of ocean sometimes.

Others including us patiently sat and sat and sat until the magic window appeared. For us that window was a narrow gap which saw us depart Fiji on November 14th.

We’d spent four wonderful months plying Fiji’s waters and mingling among her tremendously friendly,smiling, happy people They say all good things come to an end and for us this was it

So until we meet again it’s Moce Fiji and Vinaka.